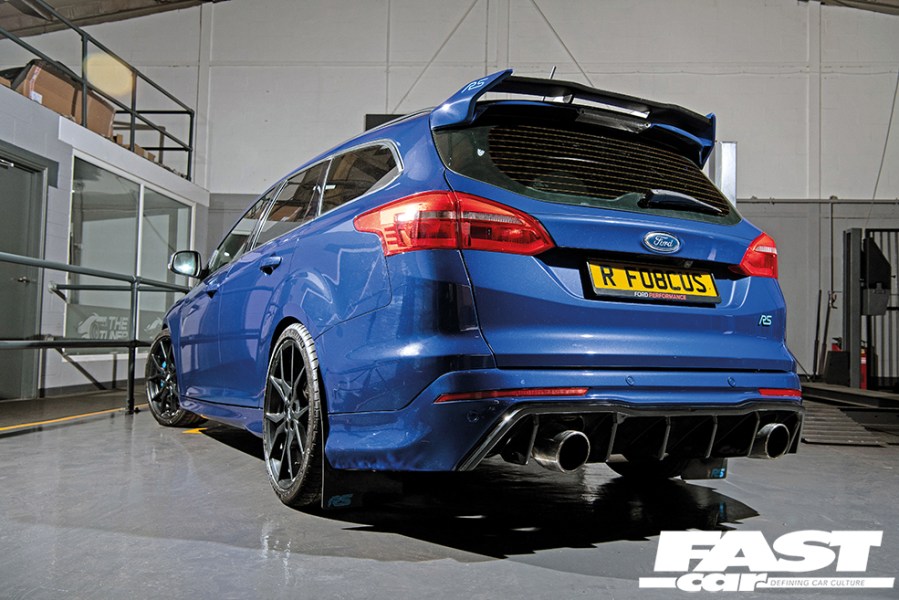 One illustration. That’s all it took. One Photoshop rendering, and it brought us one of the most inspirational fast Fords in years; a car that’s so perfect it should have been a mass-production model; a car that’s the genius work of Shan Kahn and his mate Terry.

While the majority of us with a passion for sporting wagons gazed at X-Tomi Design’s visualisation of a Ford Focus RS estate and willed Ford to build it, Shan saw the CGI and made it happen.

Shan recalls, “I saw the picture of the concept, and knew it had to be done. It had to look like Ford had built it, and it had to stay with the original colour.” 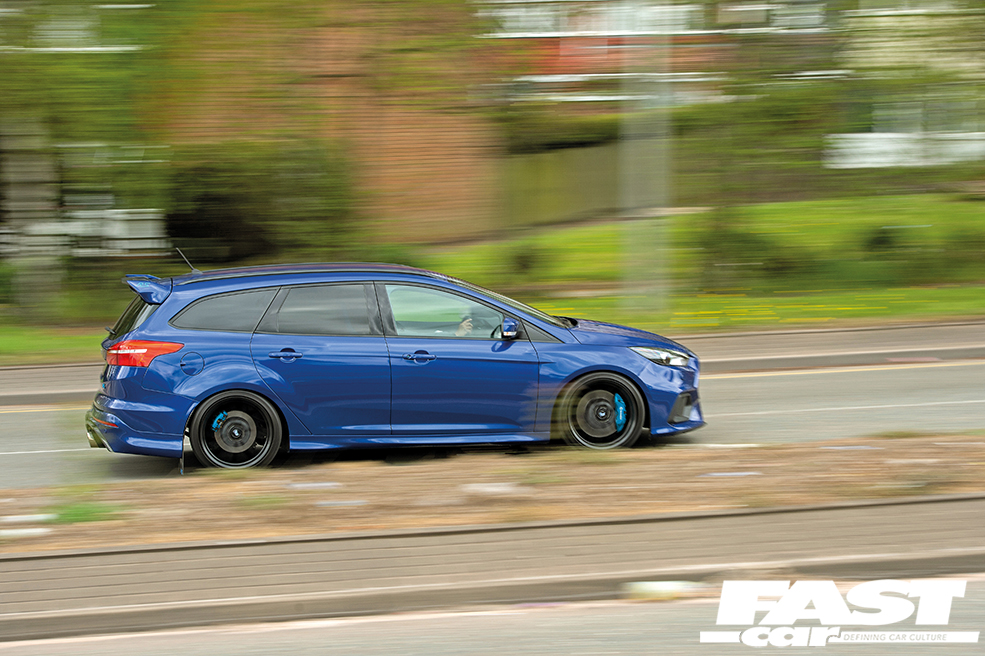 Fortunately, it wasn’t the first time Shan had played with a fast Ford. Far from it: Shan has bought, fixed and flogged dozens of seriously sexy cars – from XR2s and RS Turbos to ST225s and five Focus RS Mk3s – and his current fleet includes an RS500-kitted three-door Cosworth, an S1 project, a Transit MS-RT limited-edition (in Magnetic Grey, with Brembos, 20s and Sparco bucket seats), and a 1.0 Focus hatchback converted to full RS spec.

“It’s running 400bhp but mad torque,” says Shan. “We built it three years ago using a damaged donor. I’ve got a little yard, and I pick up salvage for a lot of traders, so I can get access to parts in exchange for favours.” 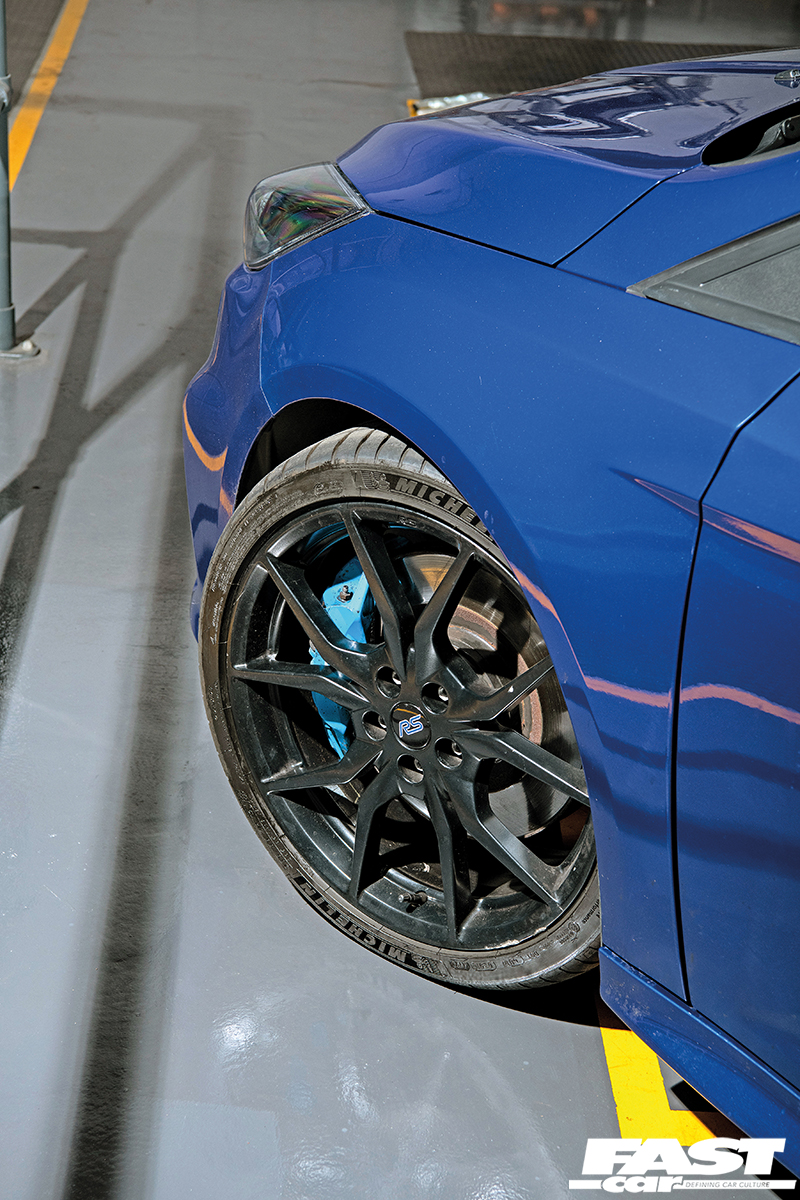 Shan’s plan was to create an RS Connect van, so he’d begun the process of collecting components for his next conversion. He says, “Once you’ve done one, you know what’s what. The ST front panel is the same as the RS, the side skirts are from an ST-Line, and a lot of the loom is similar – although it’s different for the engine and adaptive suspension.”

But Shan isn’t only a fan of sporty Blue Ovals. He owns a 700bhp Mitsubishi Evo, and was daily-driving a Golf R estate alongside a Mk3 RS. The VW was fast but dull: “It was 415bhp, but there’s no thrill, and it was no fun on a country lane. An RS estate is the best of both worlds,” he says. 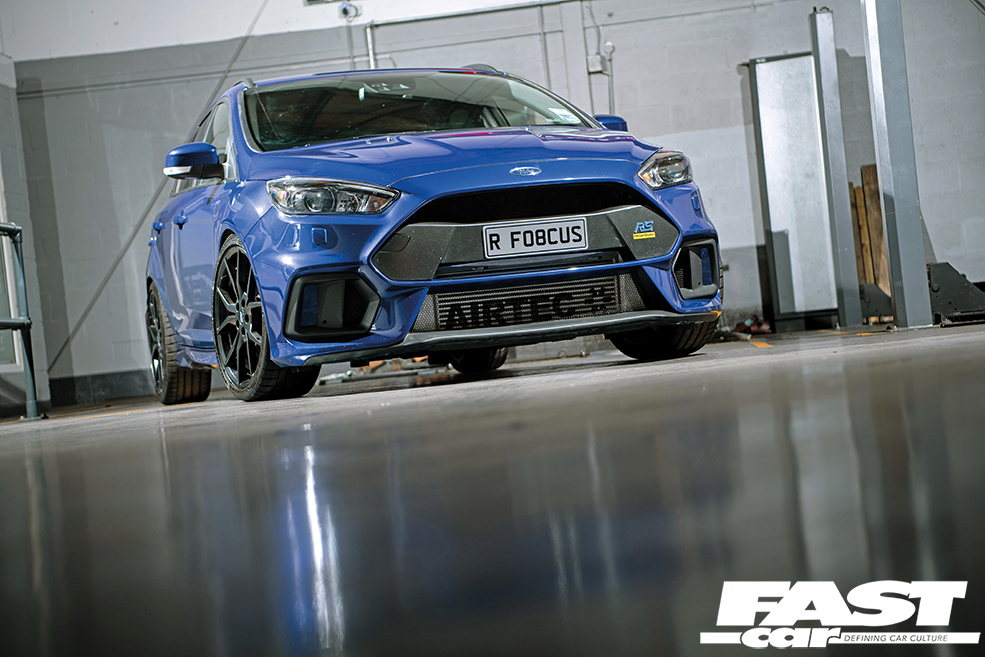 That’s when Shan’s mate, Terry, stepped in. Terry’s an independent Ford specialist, and it was his idea to get a Mk3 Focus estate on the ramp and measure the floorpan to compare it with an RS.

Shan grins, “Terry gave me the thumbs up, so I was looking on Facebook that evening, and saw an ST rolling shell advertised for £1250 – a giveaway. Someone had hit the side of it and damaged to the doors, so it was written off as a Cat N. 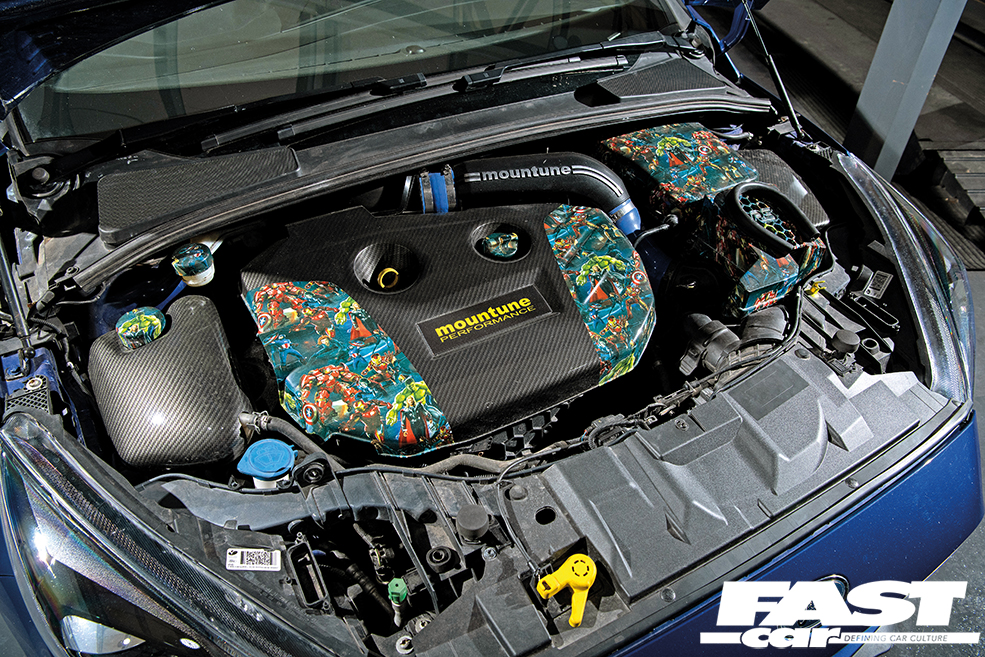 “I went the next morning and gave full asking price. It was a no-brainer, even if the project hadn’t worked out.”

Shan strapped the estate to his recovery truck and dashed to meet Terry at the unit.

“I was buzzing,” says Shan. “It was on the ramp straight away, we took it all apart and started with the parts I’d already bought for the front, then worked our way back.”

Shan makes it sound easy – sliding the guts from a smashed RS into an ST engine bay is pretty much plug-and-play, he says – but even he groans at getting the all-wheel-drive transmission system stuffed into the estate structure. Because the Focus wagon performs so similarly to the hatch, you’d expect the cars to be identical underneath, but that’s far from the case; the estate’s rear subframe and damper mountings differ from the hatchback’s in order to maximise load space, and the RS sacrifices a spare wheel to make room for a rear differential.

Shan’s solution was to cut the boot floor out of his estate, then buy the back end of a wrecked RS and blend the two together.

He says, “It took a lot of measuring. We had to cut into the chassis rail, bend it a little, put in the extra support and extend the suspension mounts. The RS also has an extra strengthening bar spot-welded behind the back seat, so we added that as well.

“We got it all tacked into place, put the car onto the lorry and took it for laser-alignment to make sure it wouldn’t be crabbing. Believe it or not, we weren’t even a millimetre out.” 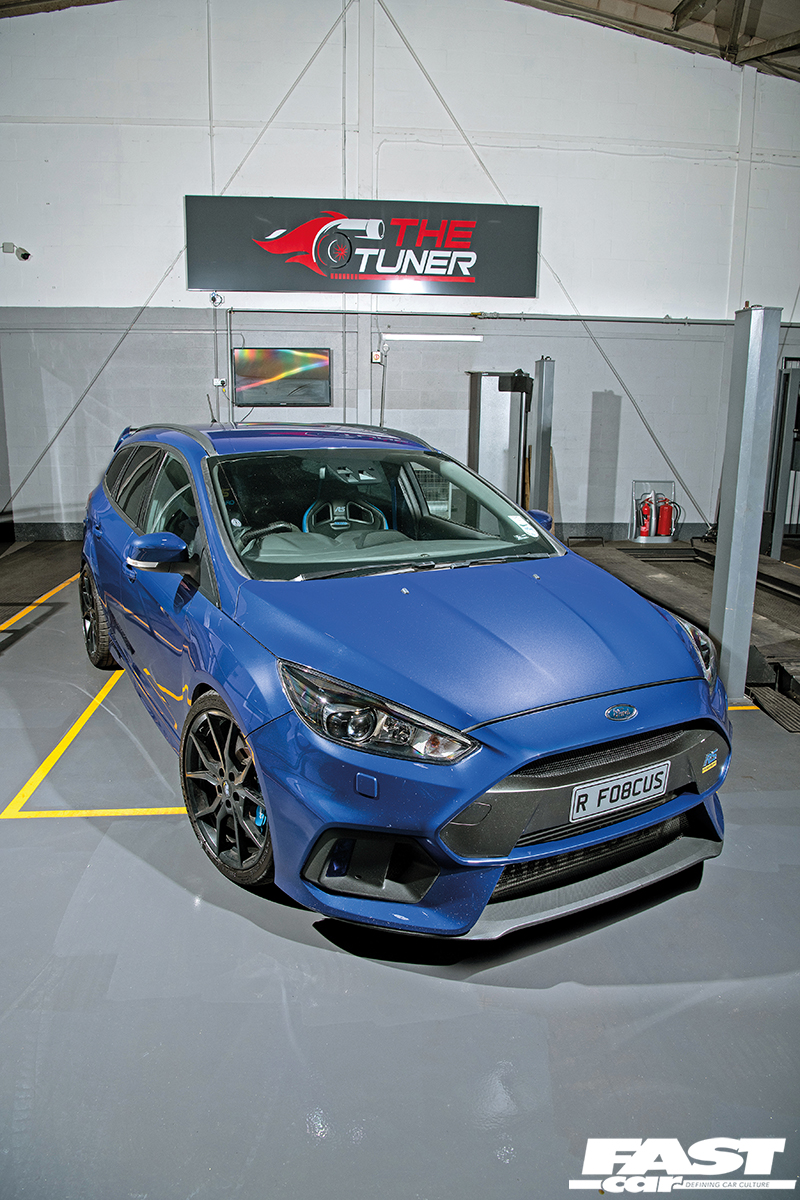 Back at the unit, Shan and Terry secured and sealed the welding, then began the rebuild. From starting in February 2021, they toiled until 11pm almost every night to perfect the project. Some bits were straightforward – the propshaft, for example, slotted into the existing Focus Mk3 tunnel and needed only threads Helicoiling to bolt up – but the fuel tank was a ball-ache, and basic brackets could take a whole day’s fabrication.

Shan adds, “We had to turn the filler neck around. We’d make something, go up the road and hear it rattling, then come back and do it all again.”

Yet even that wasn’t the most irritating element of the build: Shan had tried to build a back bumper using ST side sections and a genuine RS centre, but the way it sat was never going to look right. He’d already purchased an RS-style wagon rear wing from SS Tuning in Ukraine, so he settled on buying the firm’s diffuser too. 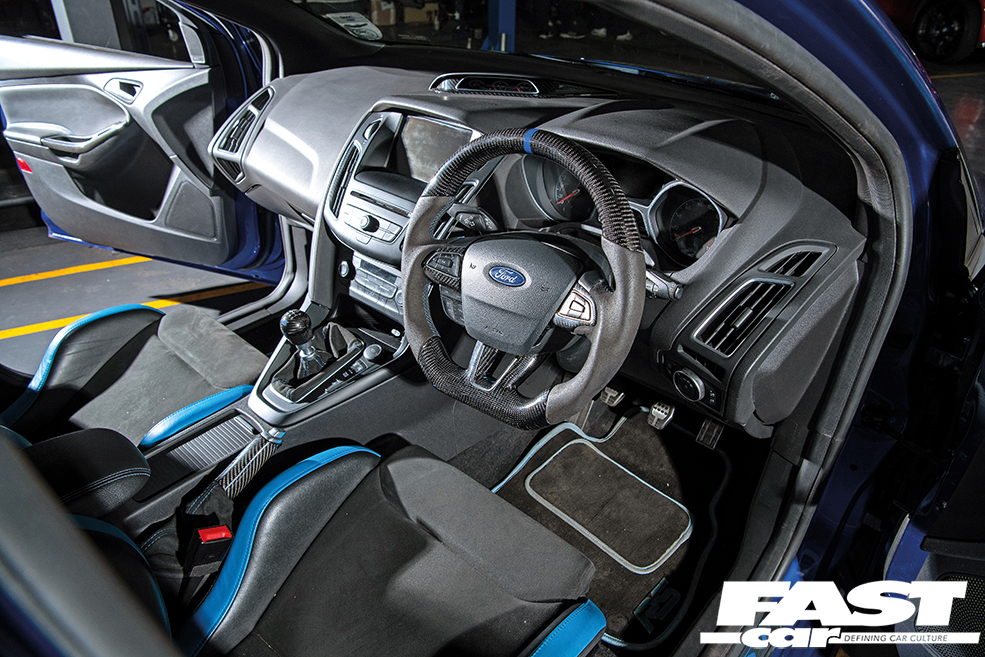 Shan groans, “SS gear is good quality but it’s hard work communicating with the company. It took three months to get my stuff, and I had to get my own courier. It was so frustrating because the rest of the car was ready to go. It took only a week to get the engine in and rolling, but I was held up by just the bumper.”

You may notice the factory Focus RS has a single circular reversing lamp, but it’s absent from Shan’s estate. That’s because Shan opted instead to use the wagon’s standard lights in the tailgate; just a case of plugging them in, right? Nope: the RS loom needed extending, then programming to the car’s ECU.

Terry took care to ensure every module works exactly as an RS should, including the adaptive suspension, driving modes, sat nav and start-up screen with RS logo. Sync 3 was even mated to a factory Ford subwoofer in the boot floor; like the RS, the floor has to sit higher to accept the 4×4 transmission, so Shan covered it in carpet for an authentic feel. 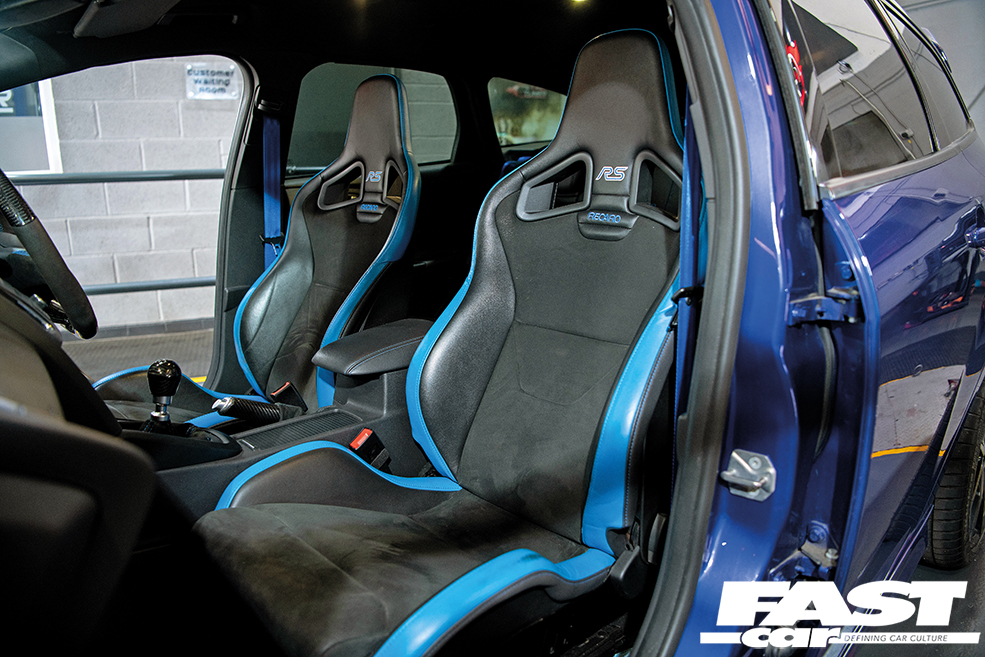 The cabin was treated to pukka shell-backed RS Recaros, matching rear seat and door cards – which fit neatly into the estate – plus a whole set of new black plastics and ST headlining from the local Ford dealership.

“If Ford had built it, this is how it would be,” says Shan. “I can jump in and go anywhere. I’ve used it for trips to the dump, but it drives exactly the same as any RS. Stick it in Drift mode, throw it into a junction, catch it just right and powerslide into a donut. Once you’ve mastered it, you can do it anywhere.”

Seeing so much smoke billowing from this estate’s tyres, it’s hard to believe it’s running only Stage 2 and around 420bhp, but Shan’s already chewed up a stock RS gearbox with his drifting antics. In its place is the ‘box and ATB diff from a written-off RS Edition, which Shan had been saving to complement an engine build from Matt Lewis Motorsport. 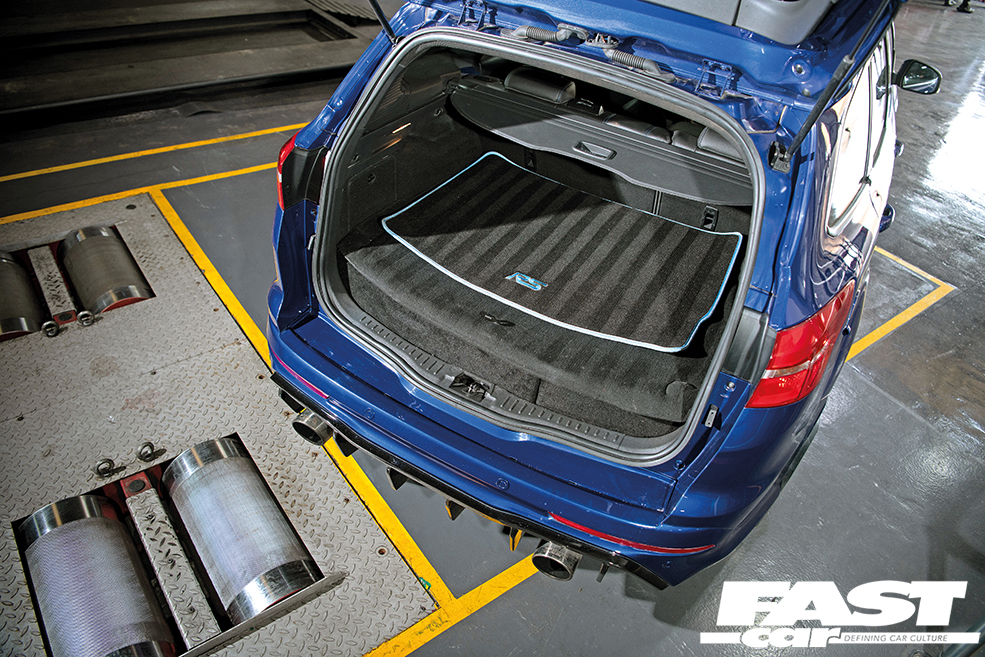 He says, “I bought a 2.0-litre block because it’s meant to be stronger. We’re using a 2.3 crank and 2.3 head, Mahle pistons and rods, ARP studs, Piper fast-road cams, and a bigger turbo. It’ll be good for 600bhp-plus, and I also want a switchable map and meth injection.

“It was the first RS Estate in this country, and hopefully the quickest in the world.”

As Shan admits, a project is never finished, and since this estate hit the road, he’s already added carbon interior goodies and steering wheel. He’s also swapped the wagon’s wheels to forged RS rims instead of its initial 20-spoke Red Edition alloys.

He says, “The forged 19s suit the car and look more aggressive. But, personally, I prefer the first type.”

Of course, Shan’s not wrong. Sticking with Spirit Blue paintwork was a nod to the original Photoshop illustration (not to mention the insistence of Shan’s missus), and the wheels seal the deal. Indeed, his load-lugging masterpiece looks even better in the metal than the much-admired concept on which it was based – and Shan’s crowd-pleasing powerslides complete the picture. 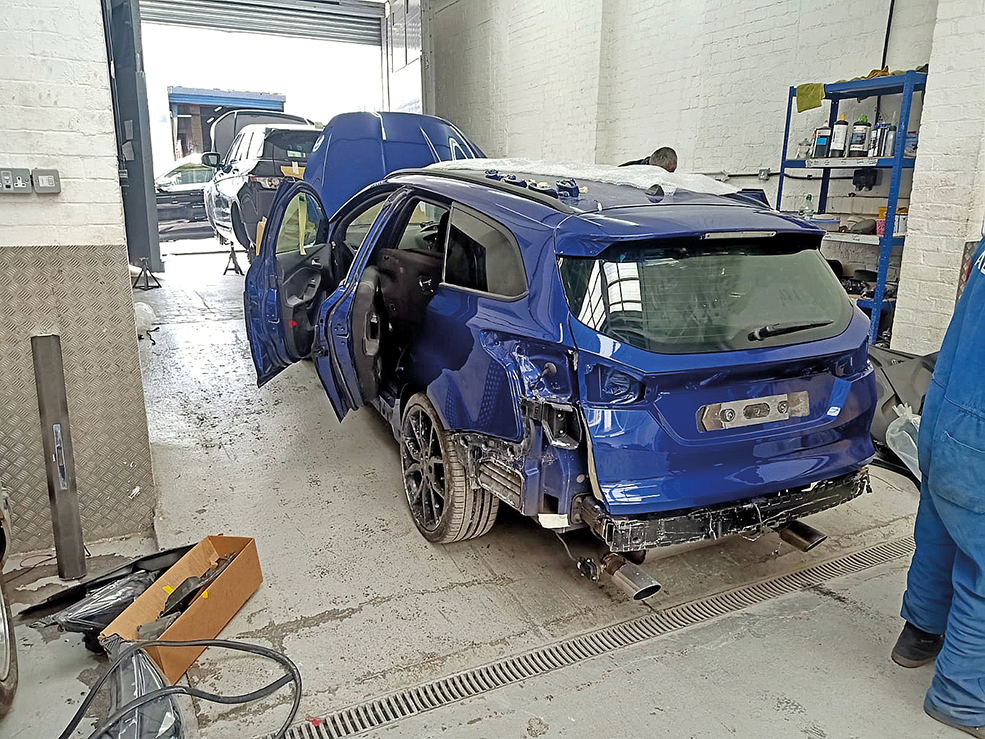 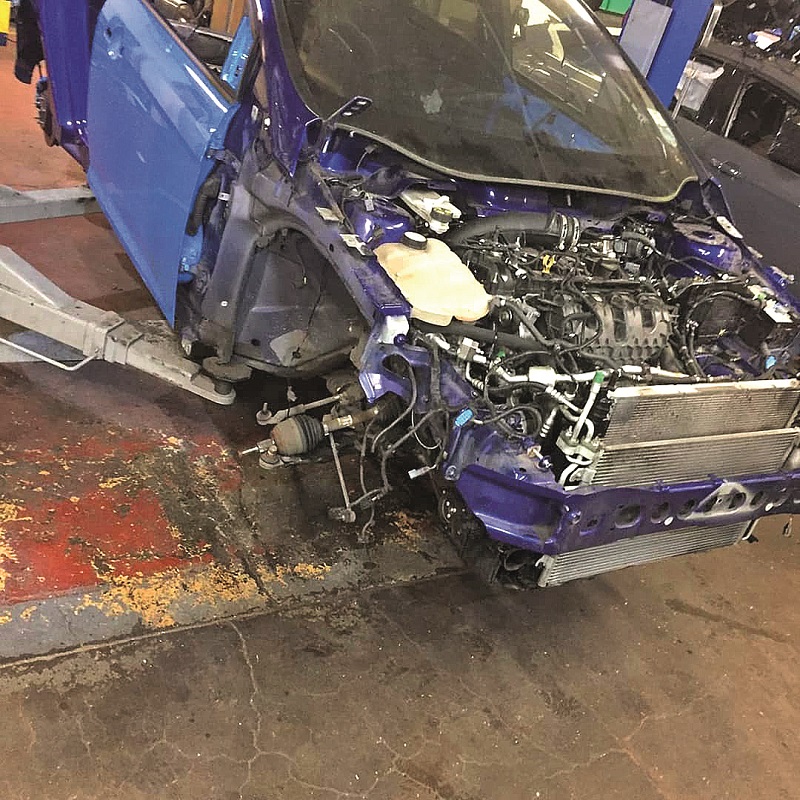 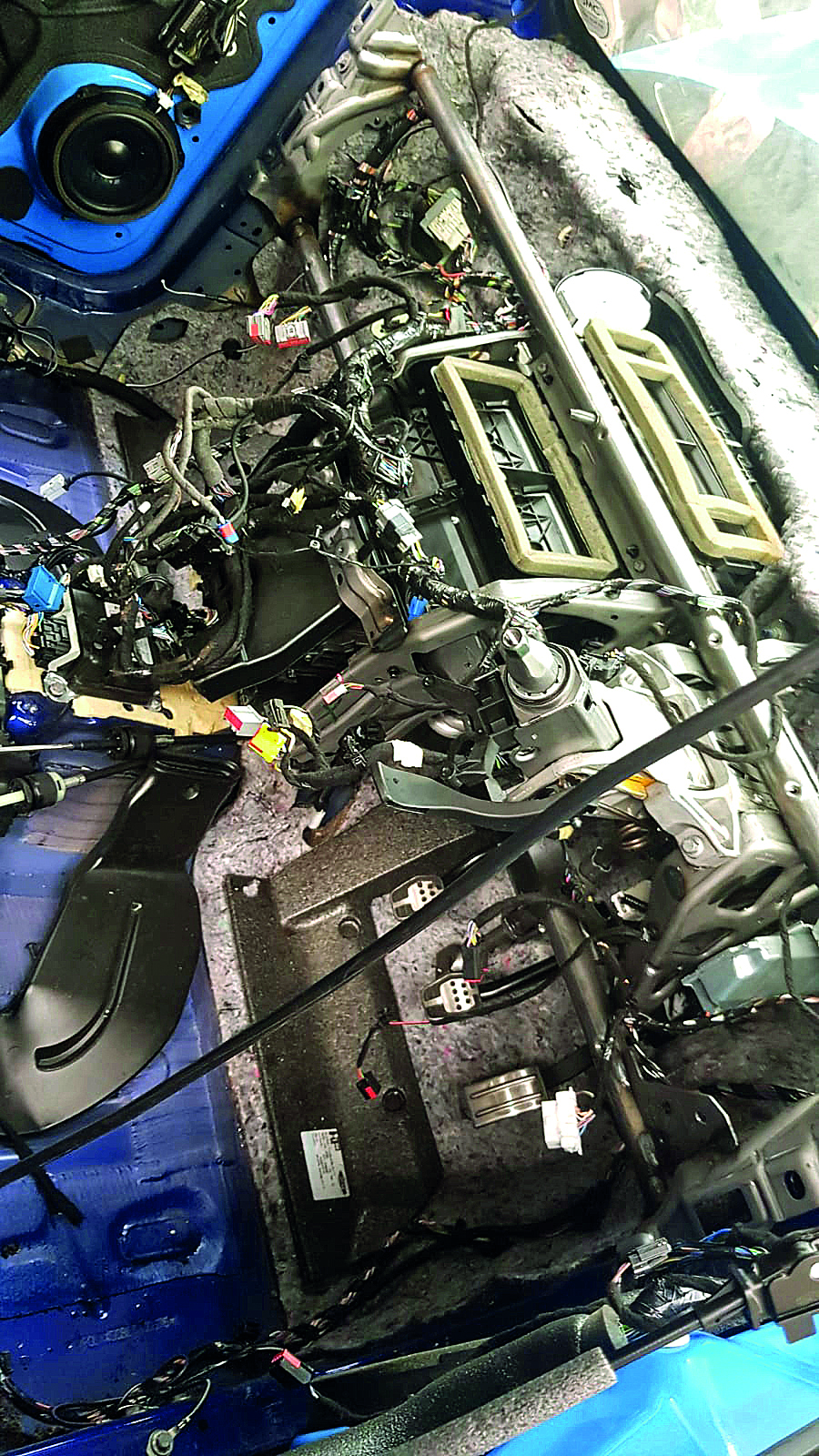 Terry turned this into a working dashboard 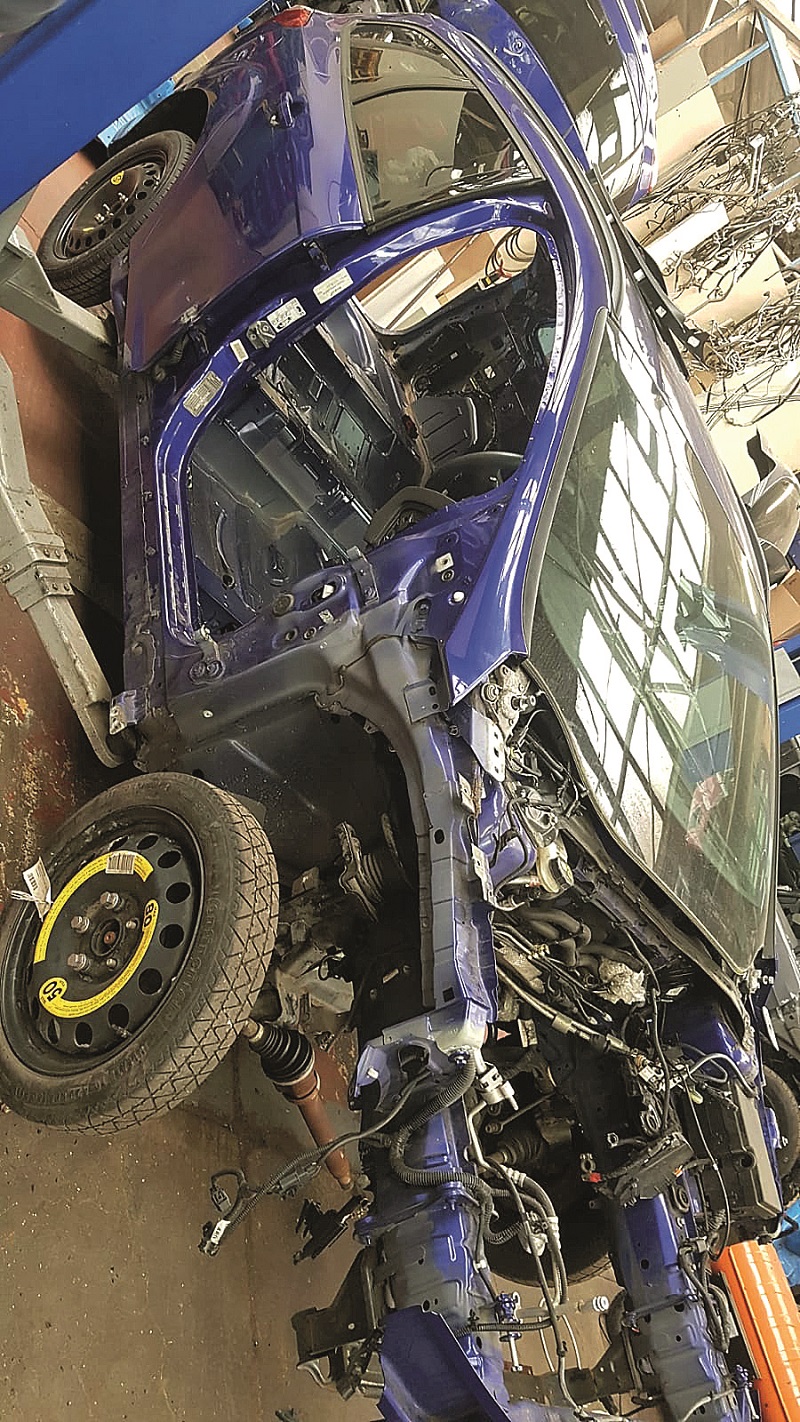 ST shell after it arrived