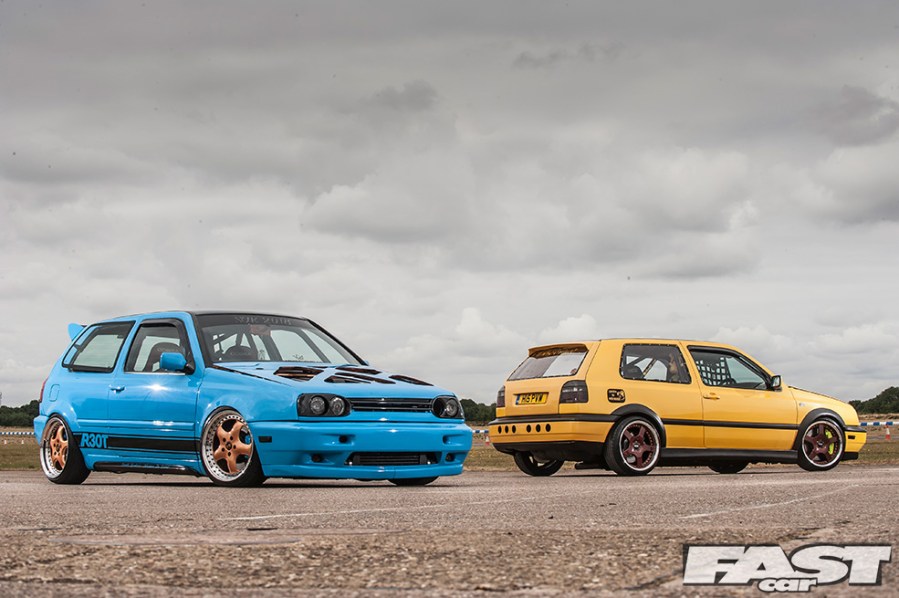 These big-power Golfs are so colourful and cartoonish, they could have been sketched by a 1950s comic artist. But right here, right now, they’re offering brutal 21st-century power and some ingenious engineering solutions…

The Marvel vs. DC Comics debate is one of those contentious issues that’s been running for generations. It’s more polarising than Ford vs. Vauxhall, cats against dogs, snooze or rise… and it’s a frighteningly violent struggle. Look at the firepower on either side; Marvel have Spider-Man, Captain America and The Hulk, whereas DC have Superman, Wonder Woman and Batman. How the hell are you supposed to choose?

These two immovable forces push against each other like the matched poles of twin magnets, and we find this mirrored in the two cartoonish Mk3 Golfs you see here. In the Marvel corner, we observe Sol Peer’s Porsche-blue car – just look at his headlining and doorcards to see where his allegiance lies. And fighting the DC corner is Rae Gami, his Lamborghini-yellow Golf’s headlining proudly flying the DC Comics flag. When two irrepressible energies such as these meet, you’d do well to stand back, lest you be pummelled with shrapnel or simply vaporised where you stand. The fact that these cars are running a combined 1,200bhp should be enough to convince you to exercise caution… although as we tentatively approach the owners waving our well-worn white flag, a ripple in the Matrix glitches across our midst. These two fellas aren’t mortal enemies. They’re good mates, united in enthusiasm for ridiculously powerful retro Volkswagens, and there’s little to be afraid of here. We sheepishly trouser the flag and start asking a few searching questions, more than a little disarmed by their broad smiles.

We veer toward Marvel first of all, largely because the holes in Sol’s custom bonnet offer a window into a frankly incredible engine bay and we find it hard to look away. “I’ve always owned Volkswagens, and I’ve always liked to put my own unique touches on them,” he offers, by way of introducing a superhero back-story. “When I passed my test, both my parents had Mk3 Golfs, so it was natural for me to get one too – and I’ve had so many! Oh, and I’ve always loved VR6 engines. You can’t beat the sound of a VR6!”

No arguments here, and it’s obvious that this shiny blue Mk3 is about more than six-pot grunt – the aesthetics are flawless, and that’s attributable to Sol’s day job as the driving force behind Heart and Sol Paintworks. It’s always been on his bucket list to build his dream Mk3, a fusion of form and function, and that’s exactly what you’re looking at here.

“When I started planning this build, I already had a Dragon Green Mk3 VR6 and a Mk3.5 cabby VR6,” Sol recalls…