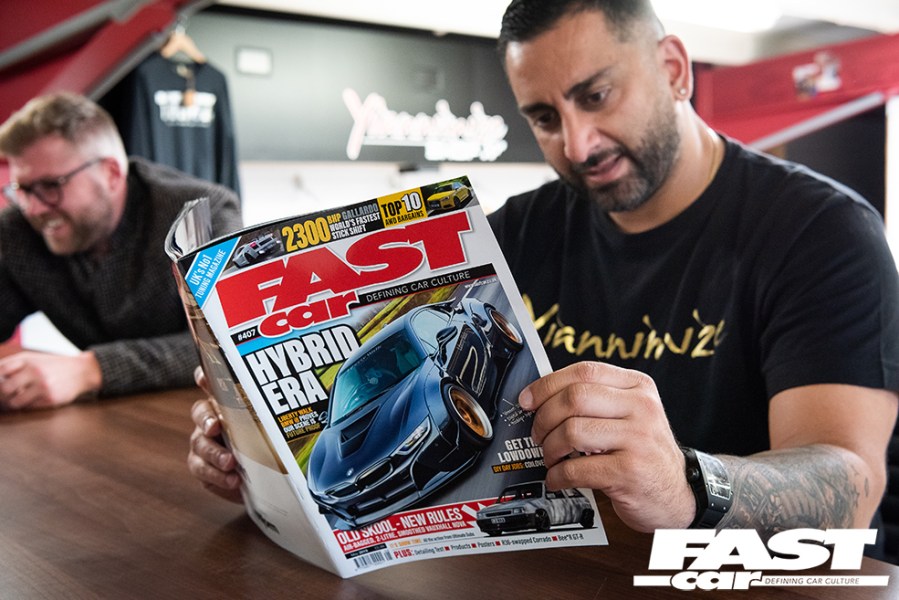 Yiannimize are huge in car wrapping and the aftermarket tuning world, so we chat with the wrap star himself, Yianni Charalambous, from the hit TV programme Yianni: Supercar Customiser…

He owns a trio of Lamborghinis, is the star of his own TV show and his clientele would rival the guest list of the Oscars, but Yianni Charalambous has come from humble beginnings and is as enthusiastic today as he was when he started Yiannimize over a decade ago. We decided to sit down with the car customiser of the stars, rewind the clock and see how he became one of the biggest names in the aftermarket industry.

Q) So Yianni, have you always been a vehicle customiser?
No, my first job was in Do It All, remember them? Then I was on the night shift at Marks and Sparks, I’ve also worked in a hairdressers and opened a milkshake shop. Then I spent two and a half years as a recruitment consultant in London. I made good money from that as I was the top biller; I used to love that but I hated working in London because of the trains: I’m a car guy.

Q) When did your car obsession start?
I’ve been into cars for as long as I can remember: I used to have a toy car that I would constantly reverse park in between the fridge and cupboard in my parents’ kitchen. I’d also line all my toy cars up in colour order.

Q) Tell us about your car history. What was your first car?
My first car was a 1.1-lite B reg Fiesta that I made to look like an XR2: it had Pepper Pot wheels and everything. After that I had a Renault 16v Phase 2, but I wrote that off and got banned from driving. I had to retake my driving test, I passed first time both times.

Q) How did Yiannimize come about?
I started Yiannimize 12-years ago, the name comes from customise and Yianni. We started by taking people’s cars and outsourcing all the work. I’d literally be dropping off and picking up cars from my trusted circle of specialists. I had people I used for wheels and tyres, another for audio and so on. I started to get a good reputation for building these cars and I eventually set up my own place.

Q) When did it all kick off?
Bacary Sagna came to me with his 2007 Range Rover. Bac was a professional footballer playing for Arsenal and we dropped his car off at the Arsenal training ground in London Colney. It obviously got loads of attention from the other players and then William Gallas asked us to do his Merc SLR and that one went viral; it was all over the papers. From then on, it’s been mental.

Q) Who would you say is your most famous client?
Blimey, I’m not sure. We’ve worked on Gordon Ramsay’s car, all of One Direction’s, AJ (Anthony Joshua), Rupert Grint, Aguero… too many to name. They are all customers at the end of the day.

Q) Do you just do vehicle wrapping?
We specialise in wraps, tints, and audio.

Q) For you, what’s the most important aspect of wrapping?
Quality is key. All the details and the finish on the edge needs to be perfect. I personally check every car; I spot everything because I look at them with fresh eyes.

Q) You’re the most famous vehicle wrapper in the world but is it right you don’t actually wrap cars?
I leave the wrapping to my team, my fitters are the best and, at the end of the day, Richard Branson doesn’t fly planes does he…

Q) What’s the most satisfying thing about wrapping cars?
Customer relationships, that’s what I’m good at. My customers are my friends and it’s so important to treat them right, and deal with problems the right way. It’s about being honest: if we break something we’ll replace it, but we’ll also let the customer know. So many companies try to cover little things like that up, but honesty is always the best policy. Customer service and the customer experience is fundamental to Yiannimize’s success.

Q) Any advice to people who’d like to emulate your success?
Don’t think you’ll get a Lambo from owning a wrap company! It’s not that easy.

Q) What would you say to people who are sceptical about having their car wrapped?
Look at my Yiannimize YouTube channel. I’ve wrapped my Lambo 6-times and never had a problem. We wrap million pound cars – there’s no need to worry.

Q) What’s the weirdest thing you’ve been asked to wrap?
We’ve wrapped a toilet before but we’ve also wrapped a coffin. There’s a touching story about that actually. Rays of Sunshine, a charity that brightens the lives of children who are living with serious or life-limiting illnesses by granting them wishes, got in touch about a youngster who was a fan of the show. I met him and he was due to visit the workshop but unfortunately he passed before this happened. His mother then asked us to wrap his coffin chrome blue, which we did. The sun was shining at the funeral and the coffin glistened in the sunshine. It was very emotional but a magical and fitting tribute.

Q) Are there any customer cars you wouldn’t wrap? Rare exotica for example?
Nope. I’ll wrap anything!

Q) What about your Lamborghini SV Roadster?
No, I wouldn’t wrap that!

Q) You said you’d wrap anything…
No, you asked if there were any customer cars I wouldn’t wrap! My SV is my investment car. I’ve wrapped the S Roadster six times; I use that as my show car but the SV is my baby.

Q) And you have quite the daily?
Yes, my daily is a Lamborghini Urus. It was the first one out of Lamborghini London. It was wrapped chrome green to match my S Roadster but it’s now been covered in TopazSkin, which is a removable paint that we’ve just launched. I keep adding to the spec list: it’s got a Nero kit and has been remapped. It’s the ultimate daily; I love my supercars and this is a practical one that I pick the kids up from school in!

Thanks Yianni. Good luck with the future and I’m sure we’ll be seeing a lot more of you and your cars in Fast Car magazine! Now, would you like me to sign that famous wall of yours? No thank Jules, you’re alright son!

FC FEATURED
Yianni’s history with Fast Car magazine stretches back over two decades. In fact, in the 90s he had a few of his cars featured in these very pages. These included an Estoril blue, AC Schnitzer E46 M3 and a 325i E30 Cabrio, of which the feature still hangs proudly on his old bedroom wall at his mum’s house! How cool is that? See, Yianni is one of us.