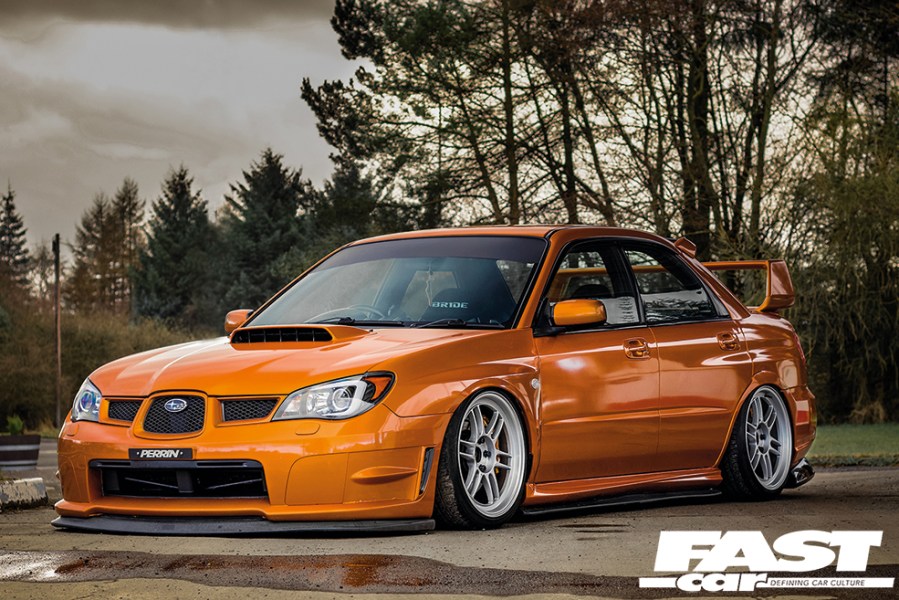 “Never apologise. Never explain. Just get the thing done, and let them howl.” So said Agnes Macphail, the first woman to be elected to the Canadian House of Commons, thereby leaving mankind a handy and quotable get-out for doing things that may raise eyebrows.

It’s all too easy to do things people will like or approve of, rather than things you actually want to do, for the sake of an easy life. This is particularly true in the sphere of car modification, especially in an age of the immediacy of social media. Perceived deviations from the accepted ways of doing things can be met with an instant backlash: ‘You’ve done that wrong,’ ‘You’ve ruined that,’ ‘That looks terrible,’ blah blah blah. Who cares? You only live once. Your brief glimmer of time on this Earth is far too fleeting to worry about what a bunch of wallies on the internet may be judging you for.

All of which brings us to the rather naughty thing Rory McEwing has done to his hawkeye Impreza: he’s bagged it. And this, of course, isn’t actually naughty at all. It’s brilliant. For two key reasons: firstly, air-ride is just ace, isn’t it? And secondly, it’ll really irritate the Subaru purists who don’t understand the handling prowess of air and delight in telling you that a bagged Scoob has been ruined. Sod them. That’s not how we play this game.

“I didn’t actually plan on fitting air-ride at all,” Rory admits. “I’ve always been a Subaru fan, since I was young, and it was really the iconic combo of blue paint and gold wheels I was after.” Evidently this didn’t fully pan out as the dream suggested, although we can probably agree what he’s got here is better than an identikit factory-spec Impreza.

“I bought this car back in 2015,” he continues. “My driving history began with the usual Vauxhall Corsa SRI, as so many people do, which was fully smoothed and dropped, before moving on to a 207 GTI that I subtly modded. And when I was finally in a position to buy an Impreza, I found this one for sale on PistonHeads and travelled down from Glasgow to Cheshire to buy it. It wasn’t the blue-and-gold spec that I was imagining. But with next to no modifications and being in great condition, it was the perfect car for me.”

What particularly caught Rory’s attention was that this was a white WRX STI Type UK, something you really don’t see very often. In fact, only a couple of dozen Type UK hawkeyes were sold in white, which makes for another interesting dichotomy: you see, those Subaru purists who get so riled up by the idea of fitting an Impreza with air-ride would presumably also be frothing at the mouth to discover this rare-as-hens-teeth white Type UK isn’t white any more. So while we’re into the quotable notables, here’s another one for you: “Reason can no longer restrain one who is lured by the fury of ambition.” Karl Marx said that and it raises an interesting question: once we’ve set our sights on a particular goal, are we willing to set aside all semblance of logic in order to achieve it? Do we get blinded by the glitter we can no longer see the bread and butter? It certainly knocks Oscar Wilde’s chirpy optimism into a cocked hat: “We are all in the gutter,” he said, “but some of us are looking at the stars.”

They’re both right to a degree, of course. But the latter viewpoint is more relevant to the sort of people who like tinkering with cars to make them more interesting. After all, who cares about so-called reason anyway? Do you really want your tombstone to be inscribed with, ‘He didn’t roll the dice too often, but dammit, he got good gas mileage’?

To soothe the fevered brows of those enraged fanboys, it’s probably worth pointing out that the deliciously dodgem-like shade of Liquid Copper the car now wears is in actual fact a wrap. So Rory could always peel it off if he chooses to once again reveal that gleaming white. We’re absolutely loving the copper too, a beautifully summery shade that just makes us want to drink cocktails.

The air-ride, though? That’s something the owner’s club may just have to learn to tolerate. Not that Rory’s worried about the brickbats of course, he’s having a whale of a time going pssssscht-pssssscht as he bounces up and down.

“I didn’t plan on modifying the car at all, in all honesty,” he laughs. “I enjoy doing subtle modifications, but never did I dream it would turn into what it is now. I never even imagined bagging a car until my pal Chris Coles told me to jump in his Golf and have a play. I’ll never forget that day. I blame Chris for everything!”

So without further ado, the STI was equipped with a full suite of Air Lift Performance upgrades, including the V2 digital management which has all sorts of natty features: eight height presets, super-compact manifold with integrated pressure sensors, infinite adjustability, the full shebang. And when the copper vision lays out on the ground, the way those Japan Racing rims sink into the fat arches is just sublime. There’s no wide-arch trickery at play here either. That’s just the way Subaru made them. Although their meaty girth is enough to bring a smile to anybody’s face. “The majority of the external modifications were done by my friend Harry and I,” says Rory. “I’d help where I could but I’m no mechanic!

“The car’s had a number of different looks over the years, from standard to having old WRD custom splits I had fully rebuilt, and a massive carbon spoiler, to a more subtle modified look with wide WORK wheels, then the style you see today. It’s got imported custom headlights and a Voltex diffuser, both of which are mega rare in the UK, and I’ve really just focused on making tasteful mods to give a little extra appeal and help it stand out rather than going crazy with it.”

This is certainly an effective approach, evolving logically and tastefully (and you can follow the evolution on Instagram: @rorymce). A sprinkling of well-chosen quality mods make far more of a statement than throwing all of the Halfords tat rack at a car.

And when it comes to power, the less-is-more approach has been key too: “I’m more into cosmetic mods than engine upgrades,” he admits. “It’s running a soft map for safety, so I’m not pushing the engine.” Modestly put, but this thing’s still kicking out 325bhp, which is more than enough for hilarity in a chassis this capable.

As with any quality car build, this also feeds into Rory’s lifestyle, complementing his scope of reality rather than overcomplicating it. It’s a social animal. “The attention it gets is crazy,” he beams. “Even taking these photos, someone stopped to chat to us about the car – it’s insane how many people spark up a conversation over the colour or the ride height and want to know more. And it’s such a cool toy to have. When I’ve had a tough week, I take the car out and it always puts a smile on my face.”

That, really, is what it’s all about. This car may be winning fans all over (except among the pipe-smokers in rally jackets), but Rory built this thing for his own pleasure. It follows the old maxim that it’s far easier to ask for forgiveness than permission. Although this Impreza really doesn’t have anything to apologise for. Look at it. It’s perfect. It’s not blue-and-gold, but who cares about that?

Thanks
The car wouldn’t be where it is today without mechanical genius Harry Hopkins! Thanks also to Chris Coles for feeding the modifying addiction with ideas; the guys at Autotec, Port Glasgow, for helping with wheel alignment; and Baillies Car Trimmers in Linwood for the amazing job on the interior.