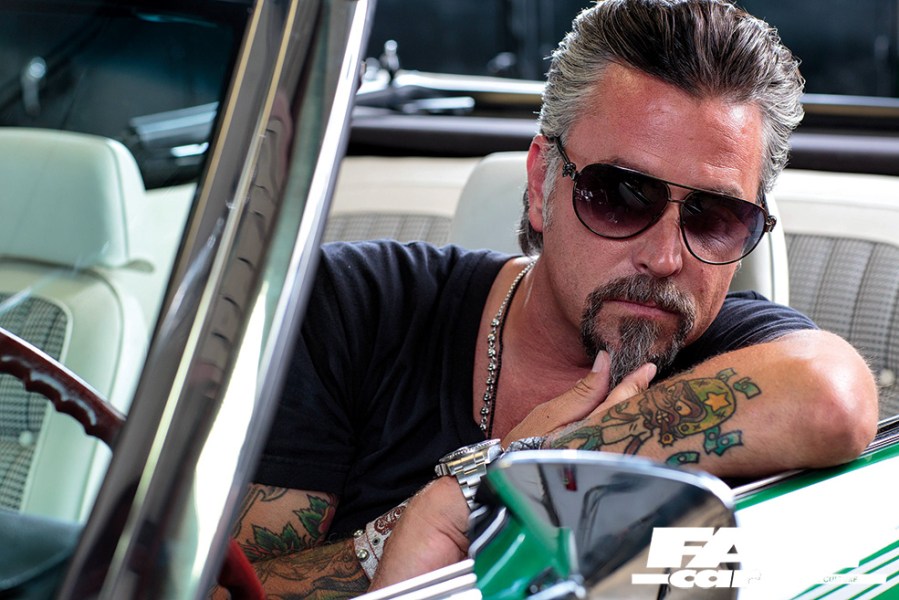 Welcome to this week’s FC Throwback, where we take a look back through the ol’ FC archives. This week we’re going back to 2015 when we caught up with the star of Discovery TV’s hit programme Fast N’ Loud, Gas Monkey Garage’s Richard Rawlings to find out what makes his car world go round.

We’ve all got little rituals that make up our weekly routines, whether it’s going to the gym or going to Brian’s Poker Night, but truth being told, Midge and myself have our own little tradition known to us as the ‘Fast N’ Loud and Kebab night’. And it’s every bit as good as it sounds!

Every Wednesday we clear our diaries between 9-10pm, phone the local Kebabie and order two extra large chips and two large donors (one with chilli sauce and salad, the other smothered in burger sauce), then as it’s delivered we flick over the channel and get ready for an hour of pure car culture entertainment supplied by the Gas Monkey Garage crew.

Fast N’ Loud is an awesome programme and you can tell that the guys that work at Gas Monkey are bang into their motors and although they predominantly work on American muscle cars and hot-rods, you can still relate to the modifications and also the problems they face with their big builds.

So when F&L gave us a call to see if we’d like to interview the main man, Richard Rawlings, it was a hell yeah! This is what he said…

INTERVIEW WITH GAS MONKEY’S RICHARD RAWLINGS
FC) Hey Richard, we’re all massive fans of the show on the mag, and a couple of us (Glenn and Midge) have had the pleasure of meeting you, driving and partying with you on the Gumball 3000. You were dressed in a pink bunny outfit with gold shoes. What was with this choice of outfit?
RR) “It was to psych out the competitors. They might see me, get scared and run!”

FC) It would take more than a fluffy pink rabbit outfit to scare Midge and Glenda, in fact they probably found it a bit of a turn on! Anyway, if I ever leave Fast Car magazine, what are the chances of being hired as your beer assistant?
RR) “If you work for ‘free’ you are hired!!”

FC) Cool, I’m on my way! We mainly feature cars from the stance scene in the magazine, but we also do the odd cool hot-rod as we are a car culture mag, and love all modified metal! Have you ever considered building a proper import tuner car – I guess the F40 you did was kinda close?
RR) “Yes, we’re actually gonna do an old school tuner in the near future – an early 70s Japanese car!”

FC) Sounds awesome and I’m already looking forward to that episode. You’ve done a bunch of rallies but what’s your favourite one?
RR) “Gumball 3000 of course! Best rides, cities and women!”

FC) You’re not wrong, us Brits know how to organise a rally. Have you ever been to the UK, or are you planning any visits in the future?
RR) “Yes I have several times. We are actually going to Stockholm Sweden next week for the 1st time!”

FC) That’s cool, as long as you’re not referring to Stockholm being a part of the UK! If you could rod an English classic, what would it be and what would you do to it?
RR) The English make cars?

FC) You cheeky fucker! Not so much now, hence the word ‘classic’ but yes and most of them can go around corners! What was your first car?
RR) “A 1974 Mercury Comet, it was in green of course”

FC) Mine was a black Vauxhall Nova, so you win! What has been your favourite Gas Monkey build?
RR) “It was the 1932 Ford but currently the 1976 Chevrolet C-10 pickup we are building now.”

FC) Ouch! Do Americans really haggle like they do on the show? If I put my car up for 15k and you offered me 5, I’d give you a gentle slap! And certainly wouldn’t agree to meet you anywhere in the middle…
RR) “Yes, probably worse. If your car was worth $30k and you put it up for $15k, I would definitely give you the $15k.

FC) My Mk4 is worth about 2k, so I’ll take the 15k, thanks! Is there any car in the world you’d never buy out of principle?
RR) “I would like to think so, but would find humour in it and buy it anyway.”

FC) What would your absolute ultimate car be?
RR) “I can’t afford it!”

FC) And finally, I’m coming over for the F1 Grand Prix of America, how many miles away is Gas Monkey Garage from the track? Can we pop in, have a look around and go for a burger and a beer at your restaurant? Maybe even do a shot of Vodka in the eye?
RR) “We are about 200 miles away from the F1 track. You absolutely can come by. We have lots of Miller Lite and burgers but we prefer tequila up the nose, eyes hurt too bad!”

FC) Sounds like a plan, although I might opt for a stronger beer as us Brits know how to drink! Cheers for your time and good luck with your next build!
RR) “No problem! Wooooooooo.”