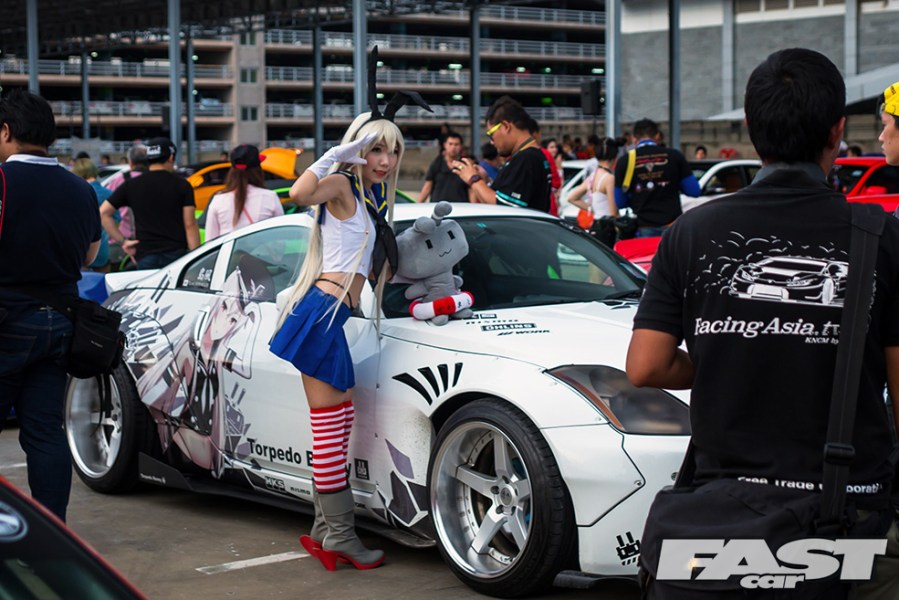 If you didn’t know any better, you’d think you’d just walked onto the set of the latest Fast and Furious film…

Music bellowing out of speakers from every which direction. Beautiful models lining up on cars, with groups of camera men following them. And a wild assortment of cars filling the loading dock at the WORK Wheels owner’s meet in Bangkok. If you didn’t know any better, you could have sworn you had just walked onto the set of the latest Fast and Furious franchise.

The Japanese wheel company has had a profound impact on the car scene across the world, providing iconic items to enthusiasts looking for lightweight hoops for the time attack car, to those looking to hard park and break necks. At the WORK Wheels owners meet, that very fact was no more apparent by the wide diversity of cars filling the docks of the convention centre.

Cars equipped with aggressive aero and widebody kits. Such as Momm’s turbocharged MR2. And a BMW Z4, the owner who created the widebody kit you see here for his car. All neatly tucked their WORK Wheels and had the power figures to go with the looks.

With the harsh import laws designed to stimulate Thailand’s economy by encouraging domestically made products, buying what one would consider as a normal enthusiasts car is hard to get in here – or egregiously expensive! That being said, a lot of the tuners in Thailand make do with what they have, which means Honda are some of the more popular cars.

From turbocharged Honda Fits (Jazz to us UK folk) to VIP inspired Accords, all of it could have been found that day. Even vans, which in many parts of Southeast Asia are viewed as status of wealth, lined up on the docks on air-ride suspension. Plus decked out interiors, to make sure all of its occupants travel in the best of luxury. And of course, WORK Wheels.

Itasha (which literally translates as painful car) is a subculture that primarily exists only in Japan and revolves around covering your entire car in an anime livery (normally your favourite one). Living in Tokyo, I’ve gotten accustomed to seeing them driving around the busy streets of Akihabara and have become friends with a lot of them. What I didn’t expect was to see that particular culture reaching the shores of Thailand.

Then again, that idea fits perfectly with the concept of the WORK Wheels owners meet. A large gathering of enthusiasts celebrating Japanese parts and car-tuning culture, while inserting a Thai spin on things.