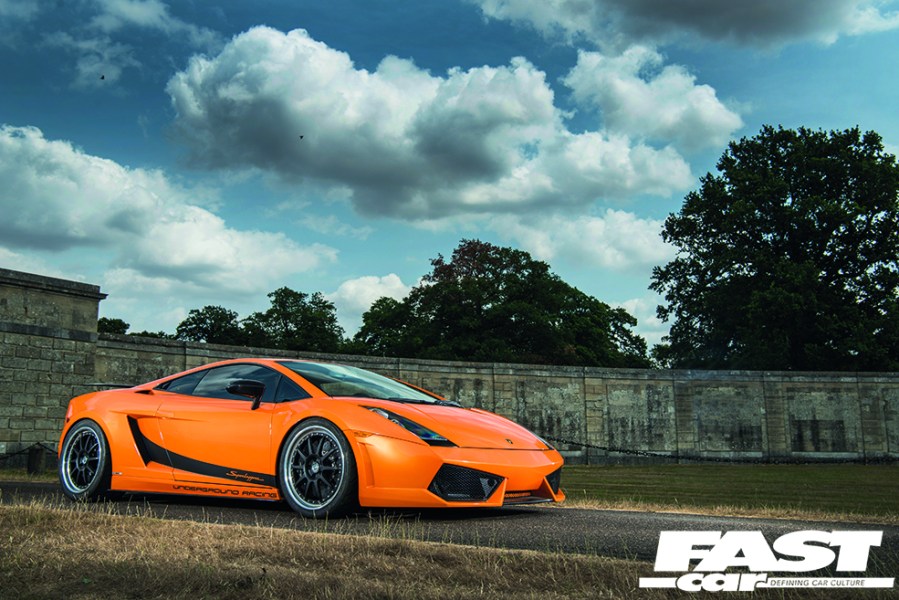 For some, standard Lamborghinis are just not quick enough. Despite the stock looks, the Gallardo Superleggra pictured here was just such a car. However, after the guys at Underground Racing (UGR) had worked on it, things changed. This is now one very fast machine…

Manufacturers are in a constant battle to produce cars with the highest possible power output that retains reliability (to an extent) and safety. The likes of Koenigsegg and Bugatti sit pretty high on that spectrum, both boasting power figures north of 1000bhp. But what if that’s not enough? What if you want a custom package to blitz pretty much every other car on the road. This is where the likes of Underground Racing come in.

This seemingly regular looking 2009 Lamborghini Gallardo Superleggera is anything but regular. By no means slow when it first arrived on the market, UGR decided that more could be extracted from the 5.2-litre V10 engine and set to work on developing a turbo kit for added power. Once 800bhp was achieved, the next goal was 1000bhp, then 1500, then 2000, now the current crop of UR projects have the Gallardo replacement (the Huracán) sitting with power roughly around the 2500bhp mark. On a road legal car.

This example started life in the US and is therefore left-hand drive. The then owner was reportedly something of an adrenaline junkie and his trail of cars included a twin-turbo Ford GT. With that sense of adrenaline, he approached UGR to build the car to specifications in the region of between 1000whp (wheel horse power) and 1500whp, depending on fuelling. As a result, the 1R kit (the top package at the time of the build) was chosen as the right path.

Firstly, to run that sort of power, both the engine and the gearbox need to be up to scratch to handle the added boost. As a result, the engine is completely disassembled and a custom UR billet race balanced short block is installed, as well as boring and honing the V10 engine. Carillio billet rods are installed, CP custom reverse dish race pistons fitted, CP Spiral locks on the pistons as well as upgraded main and rod bearings and a CP oil rail support. The fuel system is a custom billet pump hanger with high flow fuel pumps, aluminium fuel rails and stainless steel fuel lines with aluminium fittings as well as an Aeromotive adjustable fuel pressure regulator.

Now for the magic. Custom twin billet 67mm turbochargers are installed directly in front of the rear bumper and behind the engine. Tial billet wastegates and blow off valves help release the pressure and a custom 3.5inch stainless steel exhaust using aircraft quality metal is used to carry the gasses away. The sound is mildly deadened by ultra-lightweight mufflers, while airflow is controlled by a custom built air intake. The exhaust itself is heat wrapped to keep temperatures inside the engine bay to a minimum.

Temperatures within the system are controlled by a custom air/water intercooler system with a high-flow water pump and heat exchanger as well as the addition of a custom ice water reservoir.

On the transmission side of things, the Superleggera was fitted with the E-gear option, which was then upgraded with a ceramic clutch and flywheel, a new pressure plate and billet final drive gears. The top speed is approximately 225mph, with this car completing the standing mile at 218mph. The tuning is completed through an AEM engine management system with a custom wiring housing but runs the regular transmission control unit.

One question on the tip of your tongues is why? Unfortunately, the owner wasn’t around during the day of our shoot to ask the question to, but his close friend and co-owner of ES Motor UK (renowned Porsche tuners), Iby, was. Iby runs a number of high powered Porsches himself, boasting similar power figures, and he answered it initially quite simply; “well, why not?” In truth he went on to explain himself; “cars like this have dual personalities. While they’re built for road use, they’re more at home on a private runway, for example, or on a circuit”. Their close knit group of friends travel across the world transporting their vehicles to various locations for competitions in order to fully exploit the cars potential. For example, this particular Gallardo has made a number of appearances at Bruntingthorpe for a VMAX event as well as travelling to Germany for a high octane event. VMAX hosts a standing mile sprint, with the highest record speed at the mile marker taking the win. This Gallardo managed to hit a staggering 219mph in just one mile from a standstill.

On the day of our shoot, regular fuel was only available to us; to fill the car up with race fuel would be an unnecessary expense for the road. Besides, we think 1000whp (roughly 1200bhp) is more than enough power… Iby drove the car; being LHD, belonging to his friend and also about to be put up for sale, the owner (quite rightly so) only trusted his closest friends behind the wheel. As we pull out of the dealership that the car resides in (ASM Performance, Milton Keynes), what surprises me most is just how normal it feels. The Superleggera from factory is treated to a host of carbon and Alcantara optional extras, so there’s no funny business going on inside. The boost gauge is neatly hidden away in the glove compartment, so initially you are seemingly going about your business in a regular 5.2-litre V10 Gallardo.

The one thing I did notice out of the block was Iby had elected to change gears manually, rather than allowing the auto box to take control in and around town. “With the modifications to the engine and E-gear transmission, the clutch is unable to sense when and where to change engage and disengage for gear selection, leaving the car in auto could risk damaging the transmission”. The second thing I noticed was just how jerky the gear change was. Fortunately, this has nothing to do with the modifications and more to do with the E-gear itself. Transmissions have come a long way even from 2009, with the new DCT gearbox in the Lamborghini Huracán being ultra-fast in comparison.

The first power pull is one of the most memorable for me. This is a short acceleration from 20-60mph. The sheer brute force of being shoved to the back of your seat at a point where you’d need to have the core strength of a gymnast to even remotely move forward is something I’ll never forget. This car reportedly pulls a little over 2g under acceleration. To put that into perspective, 1g is the gravitational pull on earth, which is equal to 9.8 metres per second. Astronauts are exposed to 3g’s of force (three times the gravitational pull on earth) under a typical rocket launch into space. Formula One drivers are exposed to between 3g and 5g in corners at full throttle. If you’ve ever been to a fair ground you may have heard of the ride Gravitron. This is where people stand with their backs against panels in an enclosed dome, which is then spun at high speed. The pressure created forces the occupants against the panels in mid-air; the g-force required for this to happen is 2g. Now you know why I couldn’t move away from the seat…

As I look across at Iby I notice the same beaming smile that eclipses my face and I quickly mentioned: “Do you ever get bored of this power?” His face told me all I needed to know but his comment was simple, “No.” The pure adrenaline produced under that amount of acceleration is something that the likes of superbike riders and race car drivers strive for. Above around 4000rpm the sound comes to life, the turbos fully spool, the acceleration picks up another notch as it climbs to the redline. My eyes are pretty much pinned on the road in front of me as trees and white lines become nothing but a continual blur. The upshift is an event in itself; the turbos release the pressure through two dump valves like a whip brushing past your ear; into third and then fourth and we’re travelling at absurd speeds. I’ve never tried cocaine, but I imagine its psychological effects would feel pretty pathetic against the full acceleration of this. I also reckon the addiction would be some way off this Lambo too…

The rate at which this car gathers speed is something that I have never experienced before. I’ve been fortunate enough to experience both behind the wheel and in the passenger seat some of the fastest production cars in the world; from McLarens to even the Aventador SV, but in this company, the UGR Gallardo makes supercars feel like big hot-hatches. That is quite the achievement from Underground Racing; to produce a car that completely obliterates any other road car going yet with the appearance of a completely stock vehicle.

The sound has to be the second thing noted; initially you get the howl of the V10 engine, which in itself is a cacophony of beauty. If an orchestra could play a V10 sound I’d buy front row tickets time and time again.

This feature was taken from Ultimate Supercar. Words by: Matt Bell. Photos by: Matt Woods.