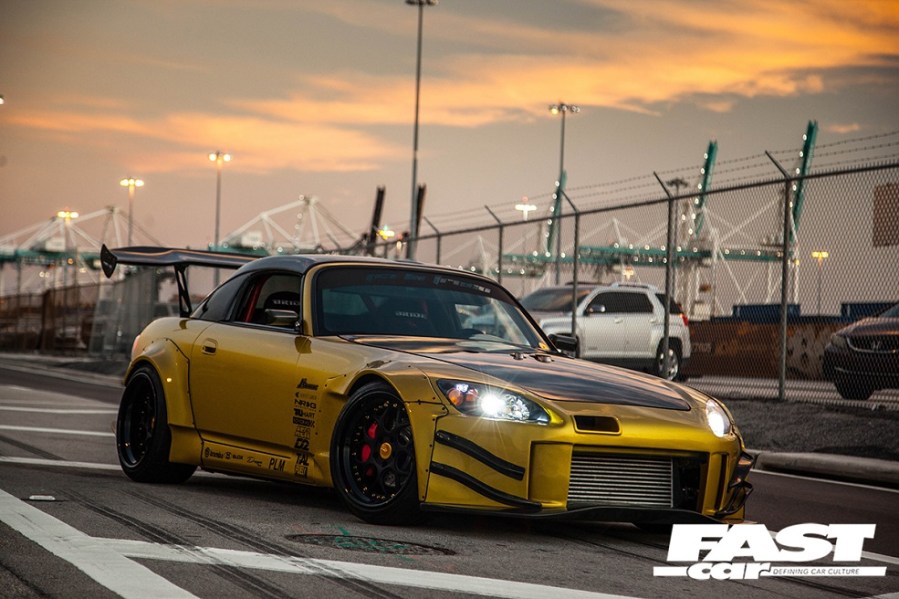 We’ve seen lots of boosted S2ks in our time, but few have dared to go to the lengths José has gone to with this monstrous turbo S2000…

When you’re writing a feature, getting to know the owner is just as important as getting to know the car. Once you understand how a person thinks, you can piece together their love affair with their builds much easier. José is a petrol head through and through, with a love affair for Japanese machinery. His journey started way back in middle school, playing video games and drawing car doodles in his spare time, as well as reading up on models in the latest magazines in the shops. It’s similar to how we all start to love cars – we grow up with a passion for this type of machinery.

For José, the modifying addiction began with his 1994 Honda Civic EX Coupe. Hondas and Toyotas tend to be the start of many people’s modifying journeys in the US, with Civics aplenty and large supplies of parts. “I started modifying with my EX coupe; it was Camellia Red pearl with a Frankenstein engine swap – a B20 VTEC motor with an Integra Type R transmission, bigger injectors, fuel pump and around 200whp.” Not a bad way to start your modifying path. That car also had coilovers, Konig wheels and a carbon fibre bonnet and front lip. 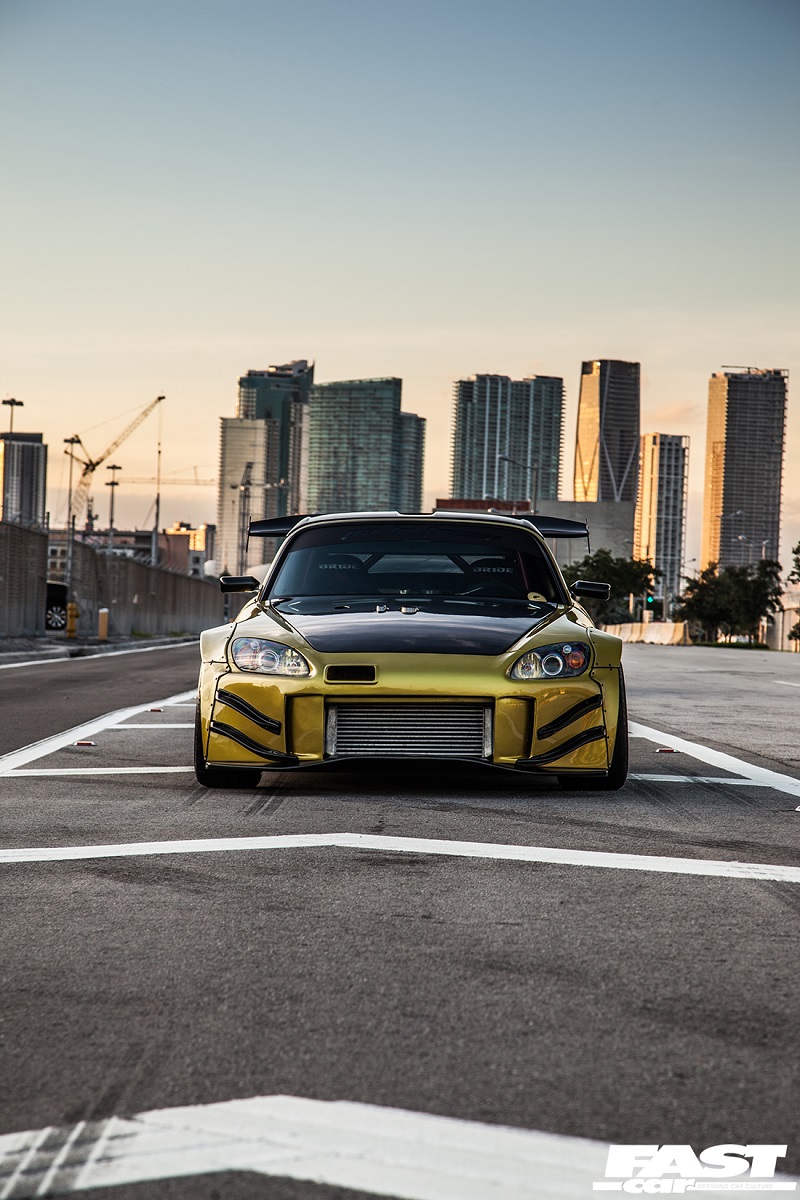 His next Honda, though, was a little different. “In truth I wanted an NSX (who doesn’t), but I simply couldn’t afford one no matter which way I looked at it. The S2000 was the next-best choice, offering two-seater vibes with a VTEC motor up front and rear-wheel drive in a nice tight package.” We don’t need to tell you how good the S2k is in stock form; it’s up there with the greats. The car he ended up buying was a 2005 model, so AP2 in American speak, offering a slightly lower redline, but a tighter rear end and softer springs to help keep the rear wheels in check when things get lively.

Having already shown he loves his cars fast, José’s attention quickly turned to the engine. There now resides an Innovation motor, transmission and differential mounts to support the whopping great Garret 70mm turbo that’s been strapped on. That F22C is strong from the factory and can support forced induction without too much trouble at all. 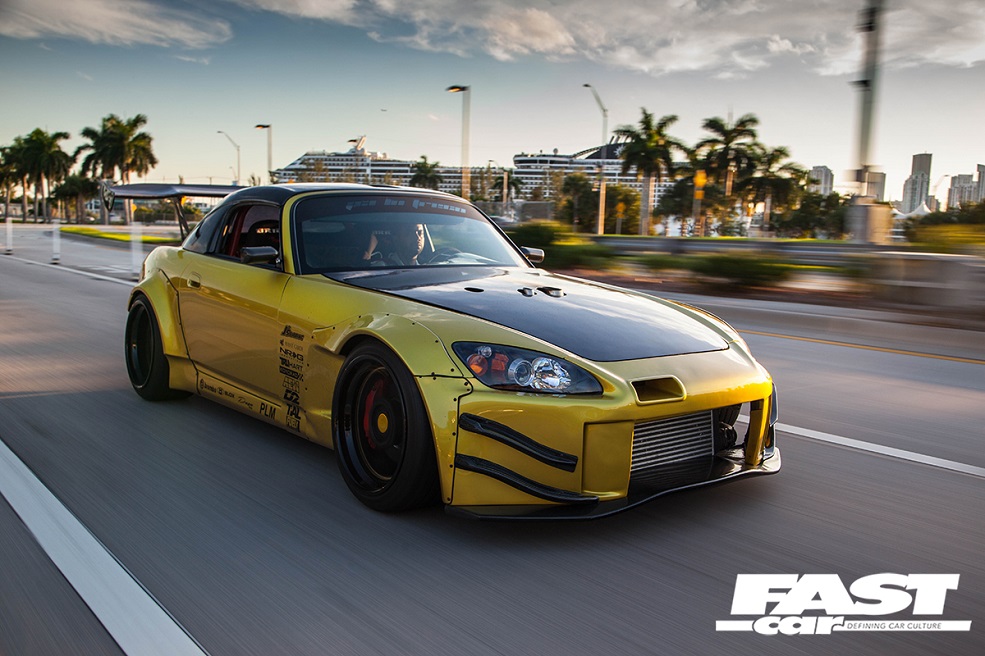 “My goal with this build was to create a car that looked the part at a show, but had the potential to perform well on the street and on the track” says José. To support that turbo is a Tial 38mm wastegate and Tial 50mm BOV. One of the biggest issues with turbocharging is getting the necessary fuel pumped into the engine. The standard fuel pressure regulator was replaced with an Aeromotive unit, with AEM fuel rail, map sensor, air/fuel gauge and boost solenoid, as well as a Russel fuel filter. All of this power is then exited through a custom hood-exit exhaust and screamer pipe, because who doesn’t want exhaust flames popping up from the bonnet when hooning? Rather bravely, the hood is carbon fibre, though…

Now, if you want big power from an S2k, the ECU needs addressing. No Hondata here, instead, an AEM V2 ECU is used for anti-lag, launch control and the like. The result? 500whp and 360lb/ft. In UK speak that’s around 560-600bhp depending on the percentage used in the calculation for drivetrain loss. Oh and a Honda that actually has torque… 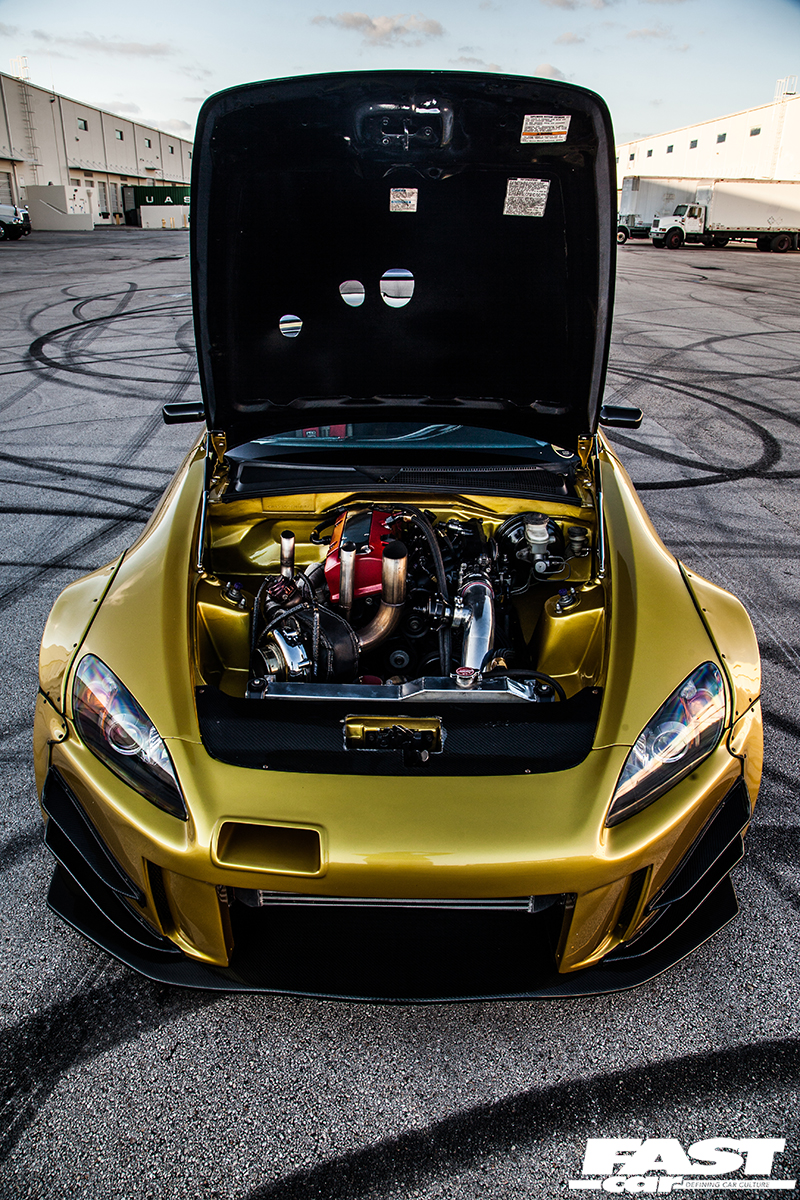 “I always love cars that can handle the power, to keep the speed up in the corners,” says José. Suspension was the natural next step for the Miami tuner who loves to attack a canyon pass. The standard setup is fairly soft from the factory for a car in this class, so a set of D2Racing coilovers were brought in to step things up. To hit that show-look aspect of this build, José went ahead and hybridised the coilover setup with Stanceparts aircups. This couples the coilover with an airbag, which means the Viair 440cc air compressor and Viair 2.5l air tank allow full height adjustability. Think of it as performance-orientated air ride and you’ll be on the right tracks. Megan Racing front and rear camber arms have allowed some camber changes to help with handling as well as setting the look of the car off next to those Avant Garde F110 matte black wheels. They measure a hefty 11×18-inches to put down that 500whp.

With a kerb weight of around 1300kg and a hefty  500whp available, using full throttle means you’re propelled into the next corner at a ridiculous rate of knots. A custom four-piston brake caliper option was installed up front, alongside drilled and slotted discs to help cool when the going gets tough. The rear calipers remain stock, but are joined by some 13-inch Ballade Sports drilled and slotted rear discs. 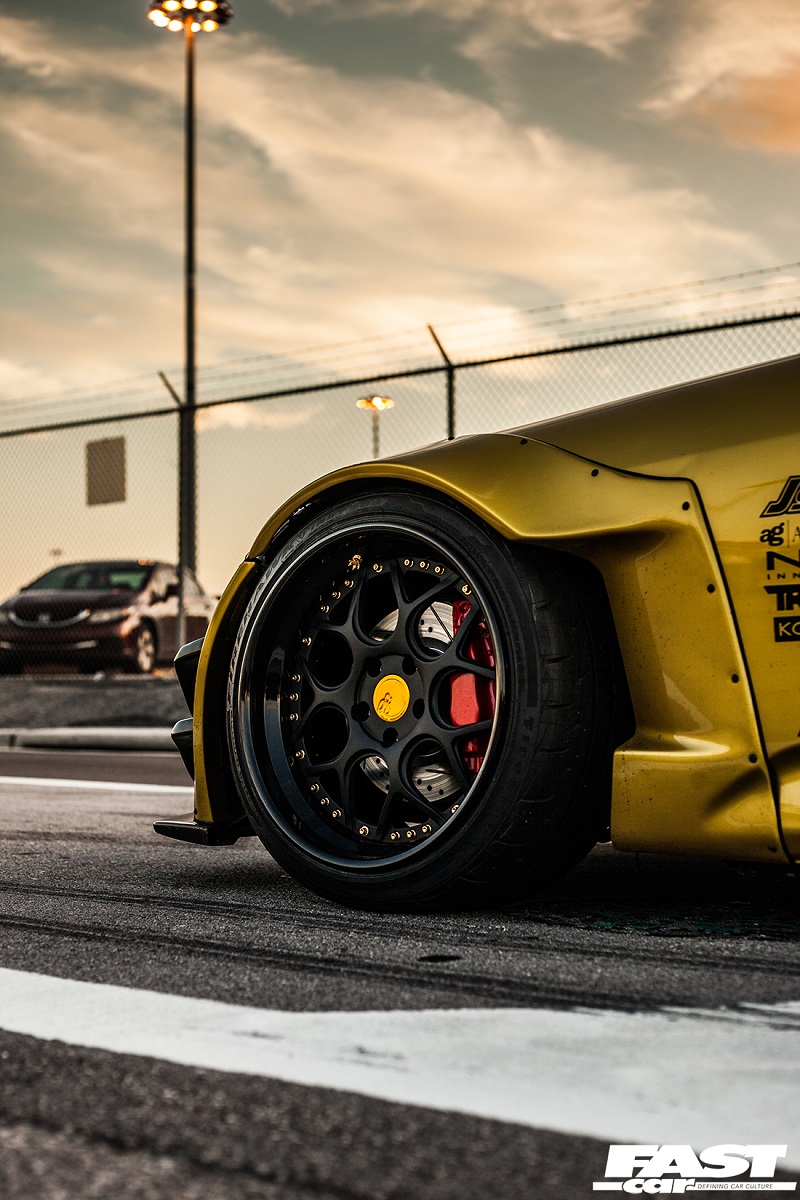 We’ve held off speaking about that exterior for as long as possible, but it can’t wait any longer. This thing is littered with J’s Racing parts, so here goes: front bumper, front bumper extension, carbon fibre front lip, carbon fibre canards and rear bumper are all from the specialists in Japan. Ever seen a J’s Racing Touge video? They’re the ones in that ludicrous yellow S2000. To fit the same wheels to his turbo S2000, José fitted monstrous, Circuit Garage arch extensions. Add to these a big wing (courtesy of NRG), which is hooked up to a carbon fibre boot and carbon fibre Mugen hardtop and he’s nailed the GT look he was going for.

Inside, things get fruity, too. Again, the show look was still an aim of the build, so BRIDE Kevlar buckets were installed, along with red, four-point harnesses and a satin candy apple red Hard Dog four-point roll cage. Things get interesting with the sound system, with a custom enclosed carbon fibre subwoofer box, 10-inch Kicker subwoofer and Kicker XA800 amplifier. The speakers are PRV 250rms jobs plugged into a Sony headunit. More carbon fibre is used inside for the dash and door panels. 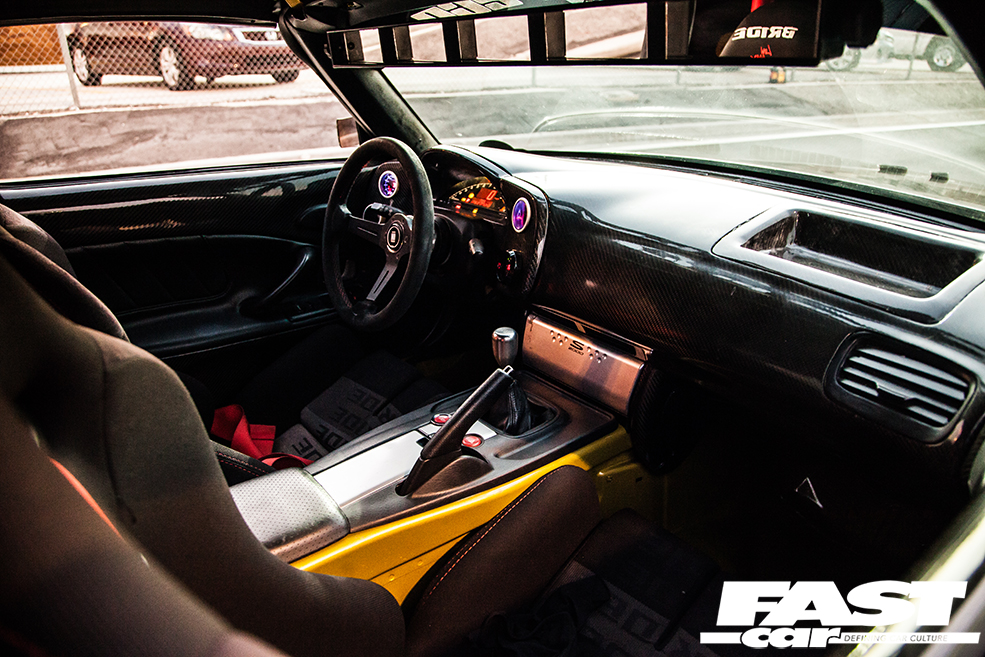 All in all, it’s an epic build, although like most, there have been a few issues to overcome. First up the bumper didn’t fit correctly so it had to be modified. Then, once the engine build was complete, there were some starting issues due to a grounding and voltage conundrum. Thinking the problems were behind them, they fired the car up to find a fuel pressure issue. After identifying the culprit and fixing the troublemaker, the tuner started to slowly add boost for the map, but then the stock clutch gave up the ghost. It was swiftly replaced with an ACT stage four clutch and pressure plate, which is more than man enough for the job – especially with plans for even more power.

“I want to take the car to compete in an autorcross event, as well as hit up the quarter-mile,” comments José. This turbo S2000 may be show-ready, but it also gets continuously “beat on” in the pursuit of performance. “Maybe I’ll add the air conditioning back in; that’s probably my only regret with this build,” smiles Miami-based José. We’d definitely agree with that one! 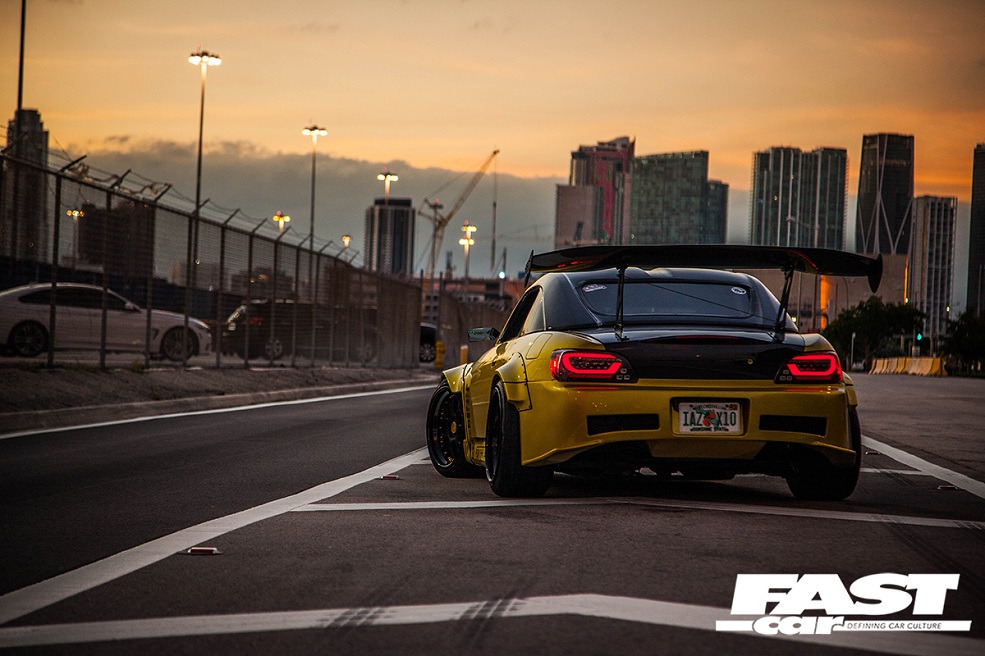