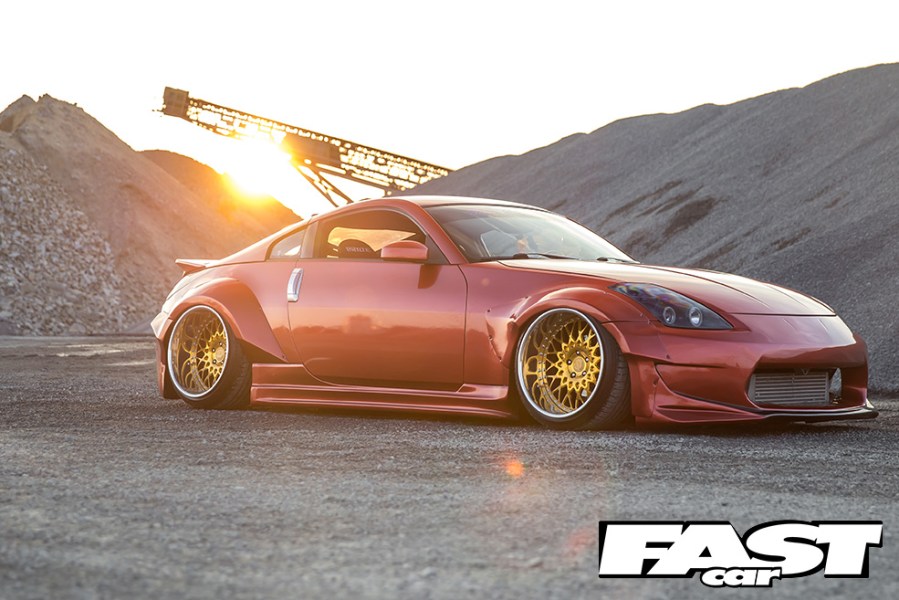 Getting your beloved alloys nicked while your car’s being tuned is any owner’s idea of hell. Corey Sanders quickly turned this nightmare on its head – hitting his project Nissan 350Z turbo twice as hard, and going twice as wide…

You might find it hard to believe. But this fine specimen of a tuned Nissan 350Z, which wins awards around the middle-east coast of the States every time it even threatens to go near a local car show, has also retained daily driver status for its proud owner, for over seven years now.

But, using a slammed street-scraper to get to work, visit the family, and grab milk and bread. Isn’t that a recipe for disaster? North Carolina-resident Corey here isn’t the sort of guy who lets such trivial issues get the better of him. In fact, he’s owned no other vehicles in the seven years that have passed since picking up this then-stock 350Z back in 2010. And both car and owner are still doing well. Take that as a life lesson, those of you considering buying a second car because your project is becoming ‘too extreme’.

Picking up an example of Nissan’s much-loved V6 compact sports car, complete with its manual gearbox and Z-Car heritage, was something Corey knew would happen soon after passing his test. “It was bone stock with some chrome wheels on it,” our main man says of this car’s humble beginnings. Not that it was ever going to stay that way for long.

“There was no real plan to start with. I’ve just always had a bit of a niche with visuals for cars and for my Z I wanted to go to the next level. Not many people around here are willing to go that extra mile. I wanted to be different…”

Keen to change perceptions in a slightly tame local car scene, Corey also wanted to keep his pride and joy for years to come. He sat back for a few months to soak up what trends were coming and going, making a note of the gaps where he could really stand out.

The first brainwave that hit him? Go wide-body. “I was thinking, ‘once I start cutting there’s no going back,’” he laughs. “So now I guess you can say I’m wide-body for life!” Because Corey’s first notable modification after the usual alloys-and-bumpers phase came in the form of a fairly subtle set of wide arches from Florida based Fiberglass Mafia, complete with some wide WORK VS-XX split rims to ensure all of the new space under those arches was suitably accommodated.

Complementing the Nismo and Amuse aero pieces Corey had slowly been attaching up until this point, this setup allowed him to create some ripples in car spheres in his area. Lasting a whole two months before the modifying itch began to strike once again…

“My car was in for a turbo install. But unfortunately while this was getting done, my WORK wheels were stolen.” Nobody wants their prized wheels pinched, especially when they’re a fully custom set of WORKs, bespoke for your vehicle. Ouch. We certainly feel your pain, Corey!

Luckily this shocking move only spurred our protagonist here on to create even more of a monster. With ideas he could cause even more of an impact with the car’s looks playing on his mind, the decision to snap up a set of Stardast arch flares straight from the Land of the Rising Sun itself was more tempting than ever.

Offering a colossal 45mm up front and 60mm out back of extra girth each side, these JDM puppies are the real deal for Z owners, and were promptly riveted to the car while the decision as to what alloys to go for next was mulled over.

“Once the arches were on, I was able to get the sponsorship I was looking for with Avant Garde,” Corey explains. Grabbing a tape measure and working out the specs to fill those arches meant these sumptuous custom Californian rims are truly mind-blowing as a result. From the company’s Function/Form line, these F141s have more dish than the kitchen section of your local IKEA, with 12 inches of width on the rears. Once on though, it was fairly easy to see why Corey was so keen to go for this particular multi-spoke style which sets off the lines of the car incredibly well.

Finishing up on the exterior was a deep Arlon Red Pearl full-body wrap to bring all of the sumptuous body bits together and contrast nicely with the gold centres on the wheels.

A body drop came courtesy of a tried-and-tested Air Lift Performance kit, with V2 management allowing Corey all the customisation he could dream of to ensure he could continue using the car on a daily basis.

Inside, some premium Bride Low Max pews and a custom Grip Royal steering wheel bring the interior bang up-to-date with a little hint of classy drifter thrown in.

But wait, you hadn’t forgotten about that turbo install we mentioned earlier, had you? Because Corey’s car is now indeed rocking a Turbonetics single turbo kit, installed and mapped up by Soho Motorsports and now offering up over 400 ponies to the fat rear wheels of his ride.

“It’s almost doubled the performance on offer, but it does so in such a smooth, enjoyable way,” says a characteristically nonchalant Corey. Isn’t it nice when a show car has the brawl to back up its outrageous bodywork? This has got to be one of the most complete 350Zs currently patrolling the streets of North America. The modification list may not be as long as with some project cars out there, but each adjustment is an inspired touch that carries a whole lot of impact with it, meaning that Corey’s landed himself an outright winner.

So what’s next? “Aero!” he cryptically replies. And knowing Corey, there won’t be any half-measures involved in that…