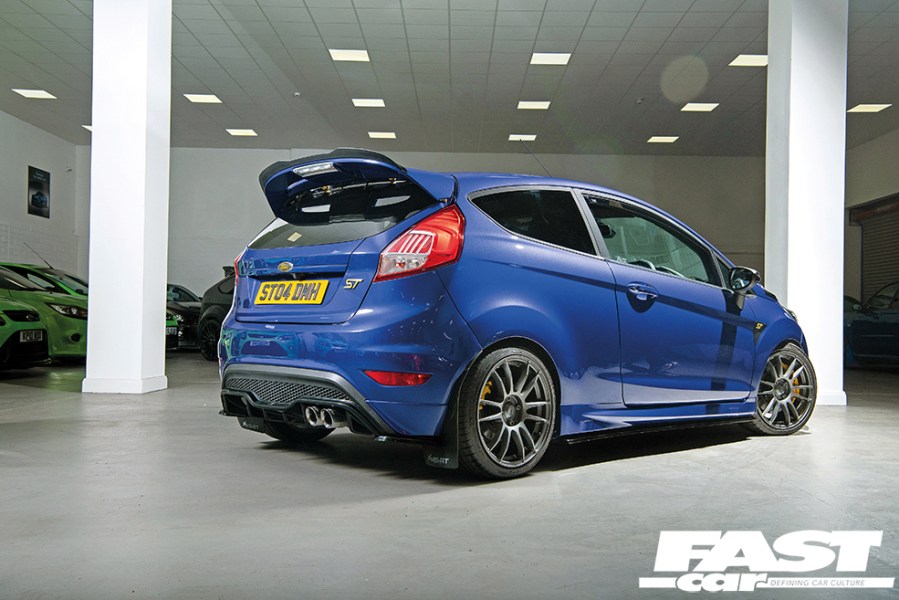 Cars, it goes without saying, are for driving. Sure, there’s a lot to be said for the low-and-lazy cruise to let everyone see the effort you’ve put into your pride and joy. And, of course, we’re very much on board with the show scene, displaying those intricate details that fill your beloved build.

But for the sheer visceral thrill of human being and internal combustion in perfect harmony, all you need is one good road and a little time to enjoy it.

It doesn’t really matter what you drive – if you set your alarm for 5am and head out onto your favourite roads while no one’s around, dominating every apex as the sun comes up in your mirrors, you’re going to have fun in anything. But it really amps up the experience if you’ve got the right car, doesn’t it? 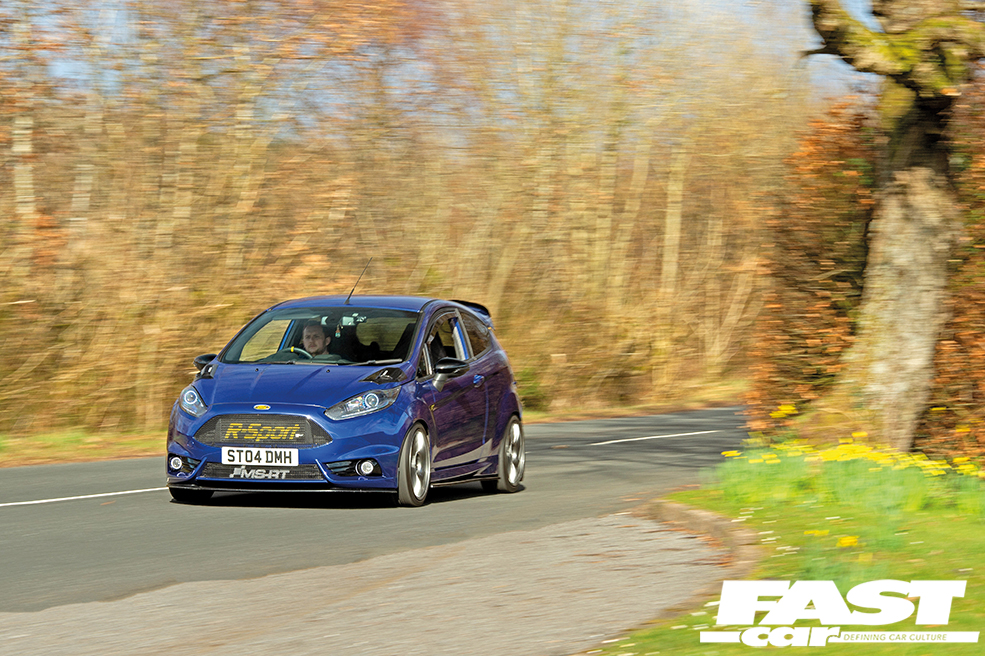 There have been countless automobiles over the years that can be considered good drivers’ cars, but the Mk7 Fiesta ST is genuinely one of the certified all-time greats. During its time in production, it won pretty much every accolade going.

And, as we all know, it’s a pretty damned tuneable car. Outstanding in stock form, yes, but there’s so much potential within the Mk7 platform. Just ask Steven Howells, who’s squeezed a solid 320bhp out of his ST and is always clamouring for more. 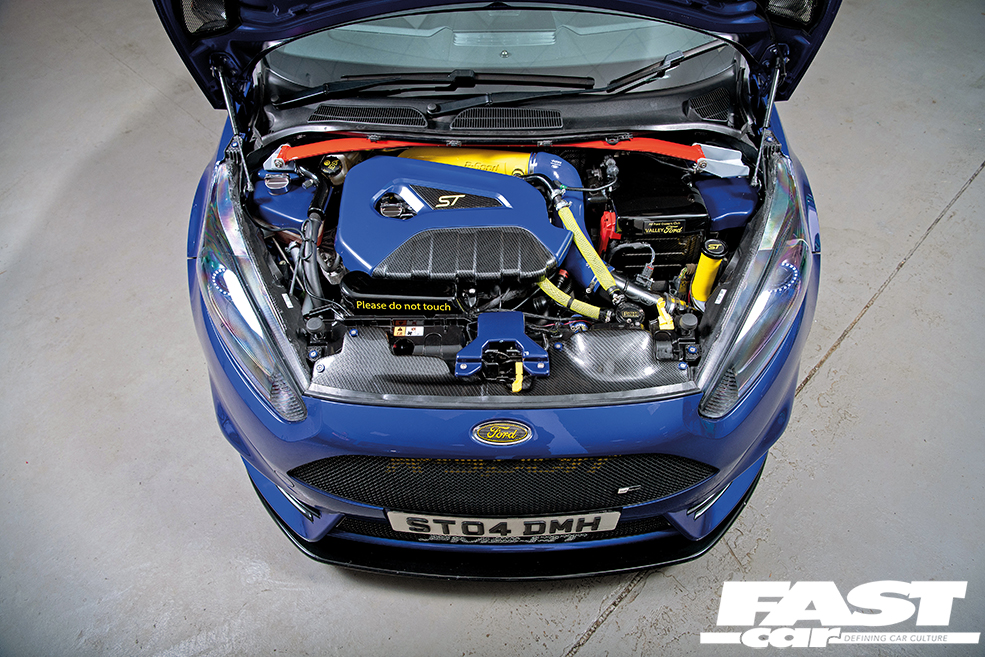 Steven says, “I chose this car because I knew what the Mk7’s potential was when modified. And they’re a really good-looking hot hatch, aren’t they?”

Yep, no arguments from us on that front. And it’s fair to say Steven knows his Blue Oval onions, having been eagerly playing this game for some time now. As he explains, “I’ve been modifying cars since I had my first Ford back in 2009. Then I bought a Fiesta ST150 in 2012, and I’ve had a few Mk5 Zetec Ss as well. 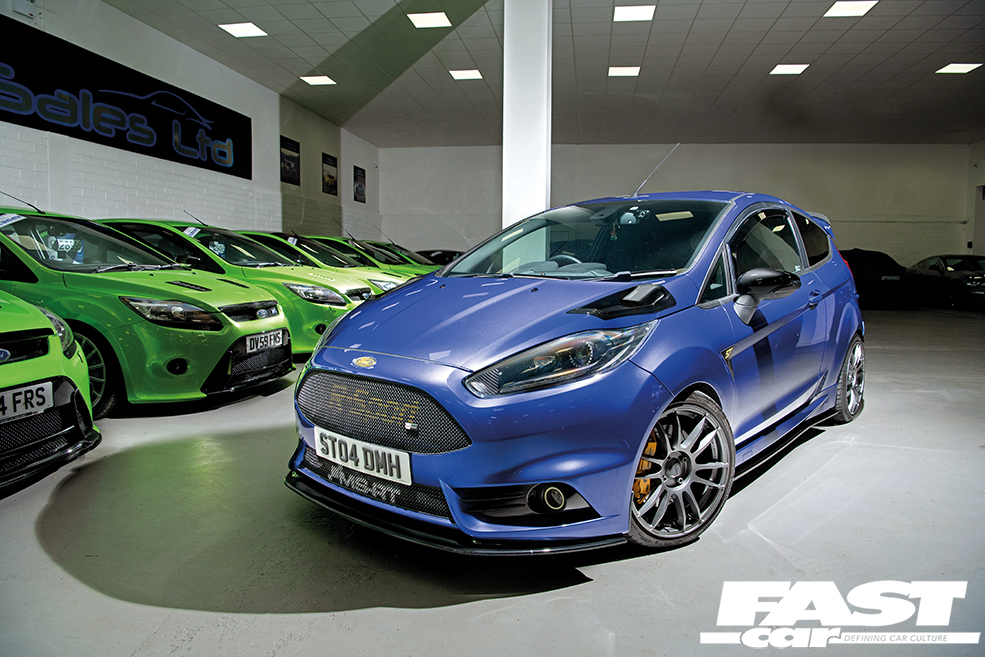 “In 2015 I bought a Focus ST225, and it was after that one that I got this stunning example of an ST180 from Platinum Cars in Merthyr Tydfil. The car only had 27k miles on the clock, along with a full service history; it was mostly standard, but with a front splitter and lowered on Redline springs.”

When he bought the Fiesta, Steven wasn’t really planning on doing very much to it in terms of modifications. Although, to be honest, if we were given a quid for every time a feature car owner suggested that, the entire Fast Ford office would be tearing about in shiny new Ford GTs. 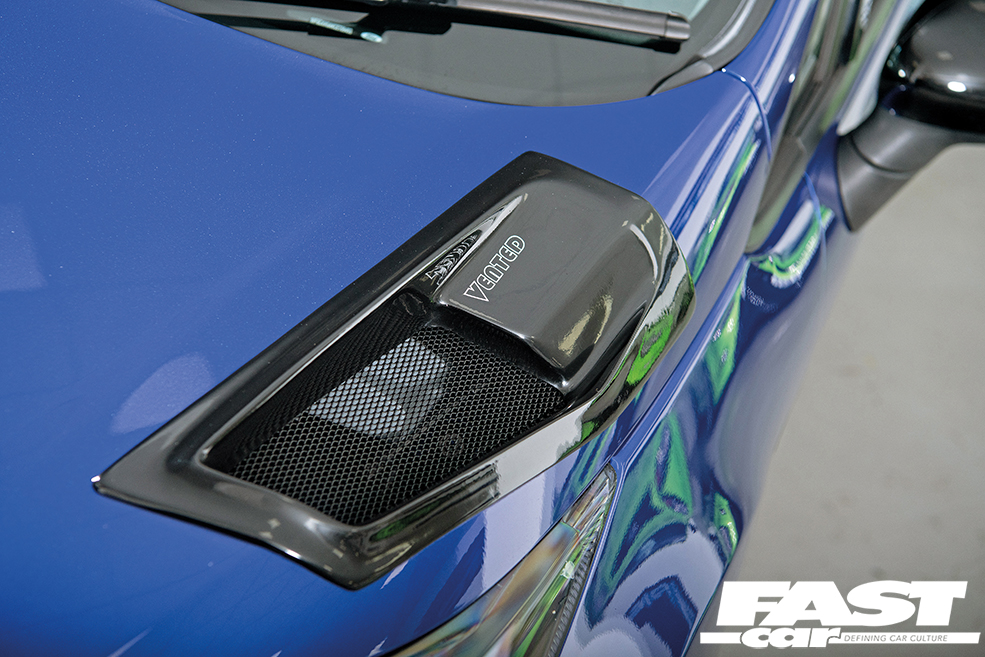 “I was just planning to fit an exhaust and a couple of other bits,” Steven says, fooling precisely no one, “but six months later I found myself running a full Stage 3 spec, big-brake kit, the works.”

Funny how that happens, isn’t it? And the peak power figure of 320.4bhp was proven on the dyno by James at BD Performance in South Wales, a sterling coalescence of Steven’s hard and tireless efforts.

The perky EcoBoost is now bolstered by the much-celebrated X47R turbo, along with an R-Sport Stage 3 intercooler, VUDU big boost pipe kit, ITG induction, and big-bore Milltek decat exhaust system. Impressively, all of this extra power is handled with aplomb by the standard diff and clutch (remarkable really, when you consider that it’s as near-as-dammit an 80 per cent power increase), although Steven has taken the precaution of fitting a Collins rear gearbox mount. 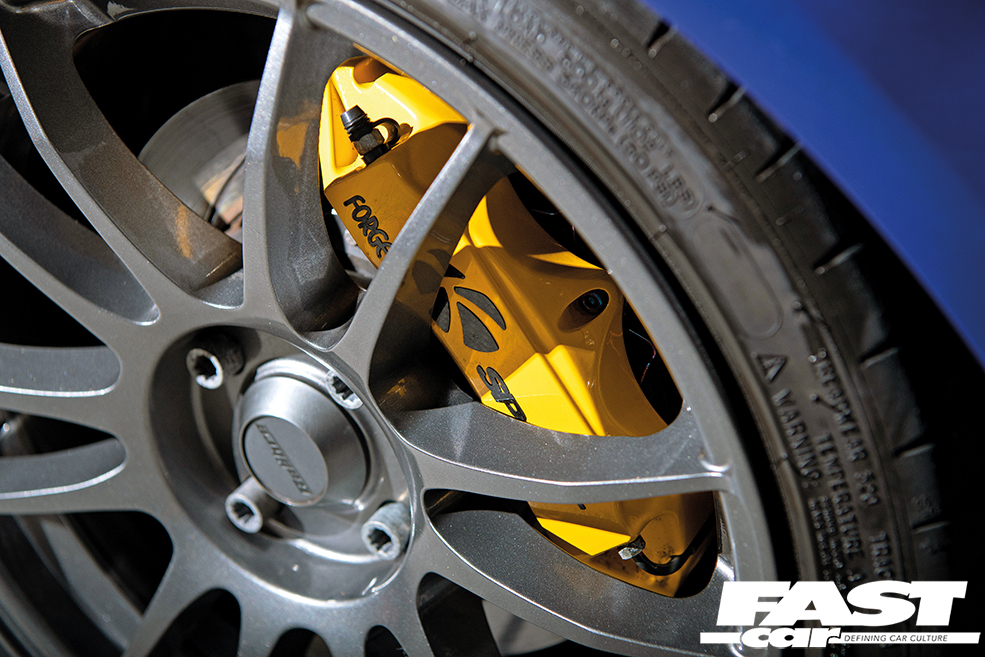 Naturally, you wouldn’t reasonably expect the factory-standard brakes to cope with such a massive increase in day-to-day thrust, so this is one area to which Steven has paid particular attention; at the business end we find a brawny K-Sport six-pot upgrade with meaty 304mm discs, while the rears have been upgraded to ST170 carriers to allow the fitment of larger 280mm discs.

Further chassis enhancements arrived in the form of Summit front and rear strut braces, and since our shoot the Redline springs have been ousted in favour of pukka BC Racing coilovers. 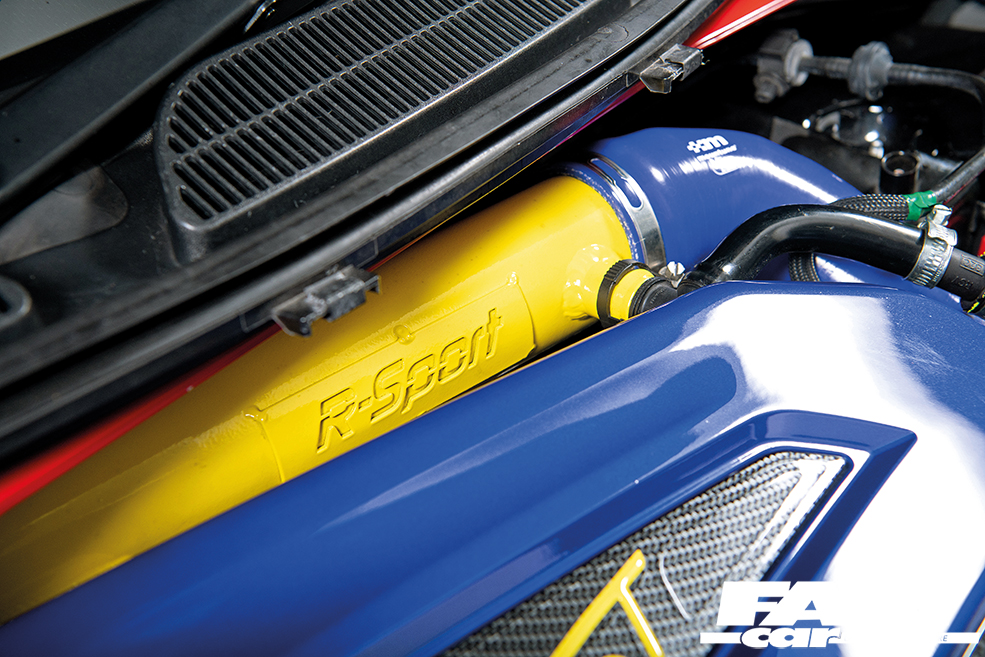 Special mention has to go to the wheel choice, as the Pumaspeed TrackLite is such an outstanding option for this platform, it’s a wonder that everyone doesn’t run them – they fill the arches neatly with no need for spacers, they’re pleasingly lightweight, they allow plenty of clearance for big brakes, and they’re almost absurdly affordable. Look pretty spectacular too, don’t they?

This project is particularly close to Steven’s heart as he’s crafted so much of it with his own two hands. He explains, “I carried out the majority of the work myself, apart from fitting the turbo, doing the remap, and installing the front brakes – which was done by BD Performance.”

The commitment to quality is palpable throughout, with Steven choosing proven upgrades that complement one another in the pursuit of performance. With this in mind, he’s focused more on the mechanicals than the aesthetics, although that’s not to say he hasn’t paid attention to the details. 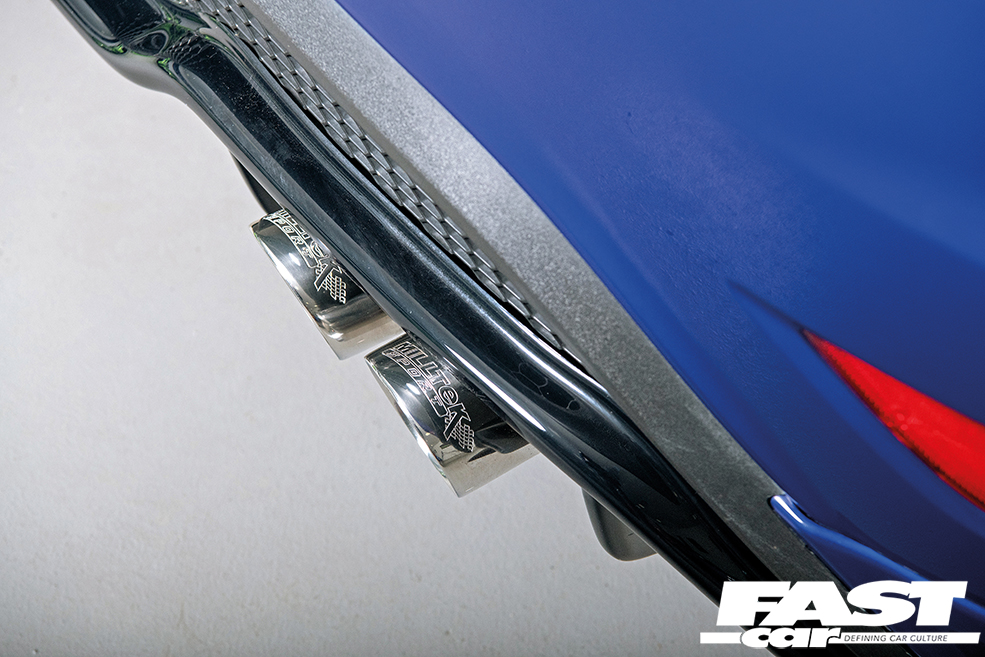 The evidence is right here that the Mk7 is such a cohesive piece of design, it takes just a few choice upgrades to turn it into a proper head-turner: Steven’s opted for the front, side and rear splitter kits from Triple R Composites, along with Zunsport grilles and Maxton Design rear diffuser and spoiler lip. These go hand-in-hand with the WRC bonnet vents and custom headlights (complete with sequential indicators) to create a really rather striking profile.

Steven says, “It gets a lot of attention at shows. Bada at BMC Auto Perfection keeps the paintwork in top-notch condition, following a three-stage paint correction back in August 2019, and has kept it topped up since – so I would like to say a huge thanks to Bada for keeping the paint perfect; he always goes the extra mile when detailing my car.” 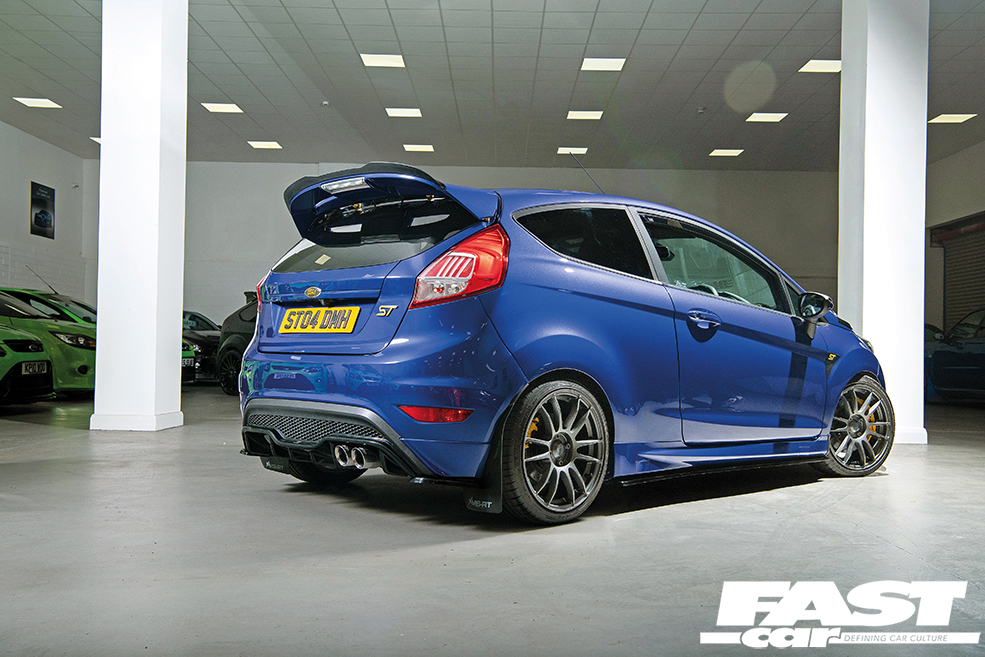 It really is the ideal fusion of form and function. Subtle but aggressive looks with a show-winning finish, housing the sort of improbable firepower that keeps a smile plastered across Steven’s face on a daily basis.