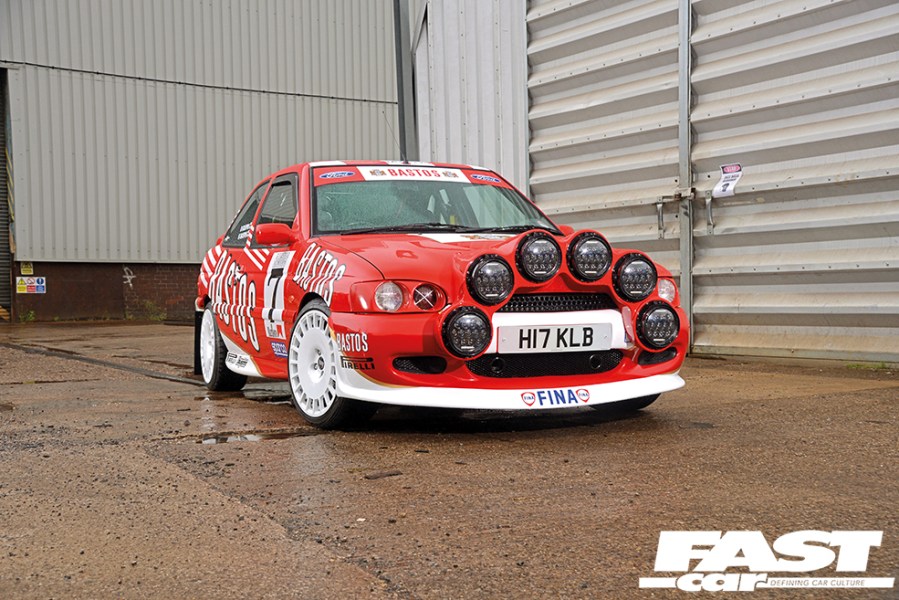 The Escort GTi is a forgotten fast Ford of the 1990s. But Dave and Kylie Raspin’s tuned rally rep is sure to be remembered…

Few of us remember the Ford Escort once wore a GTi badge – the moniker typically associated with French and German hot hatches. But with a peppy 113bhp 1.8-litre Zetec under the bonnet, alongside RS2000-inspired styling, it was a capable car – if not a little overlooked by similar Escorts wearing the RS and XR badges we Ford fans are more accustomed to.

With the exception of the legendary RS Cosworth, these later-generation Escorts are often ignored, which is a bit of a shame. Despite woeful reviews of the early 1990s, Ford persisted with development of its big seller, and by the end of production in Mk6 form, the Escort ended up as a decent car. The underrated GTi was just in the sweet spot. 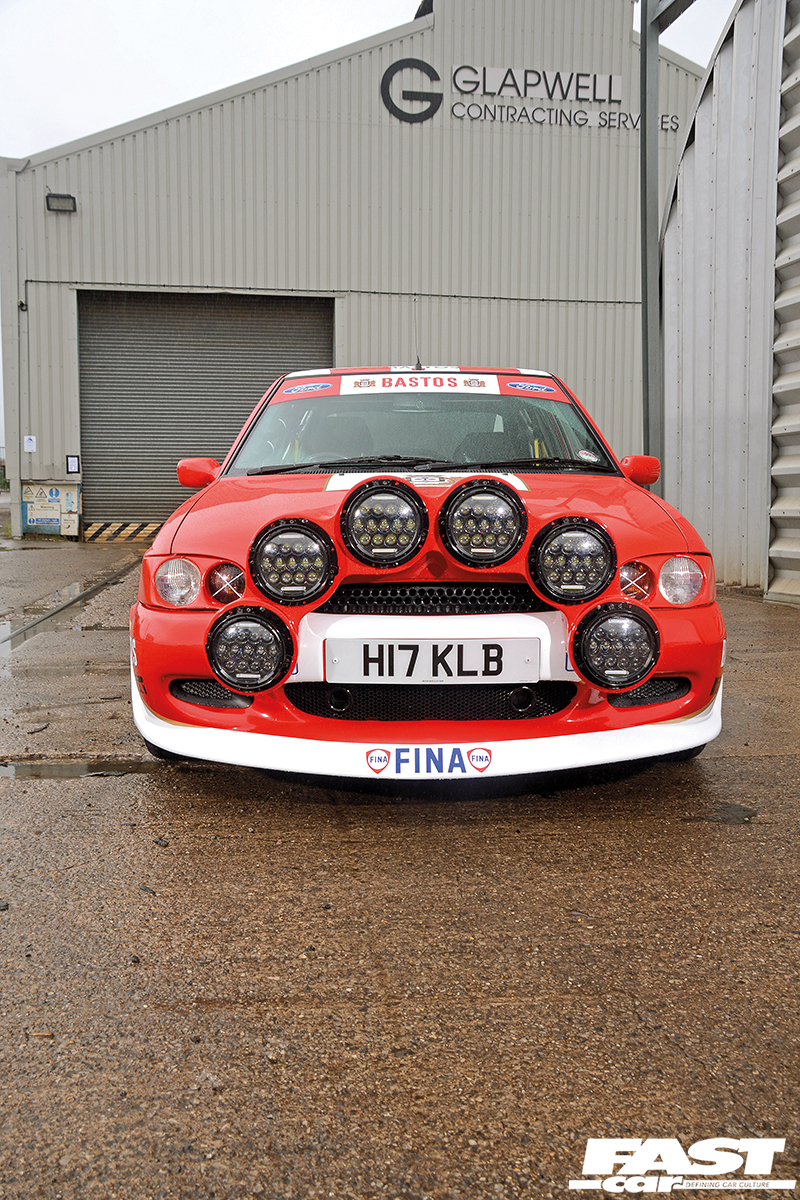 That’s probably why the Ford Escort GTi developed its own group of fans and admirers. And Kylie and Dave Raspin fall squarely in that camp.

Kylie explains, “I’ve had a keen interest in this particular generation of Escort since its launch in the mid-Nineties. I was drawn to the styling, especially the sportier models.”

Aged 16 and with help from her grandad, Kylie bought her first car, which of course turned out to be an Escort.

“I’d always helped my dad out in the garage, wearing overalls and tinkering with his cars,” Kylie recalls, “so it’s no surprise I had my own car as soon as I did.” 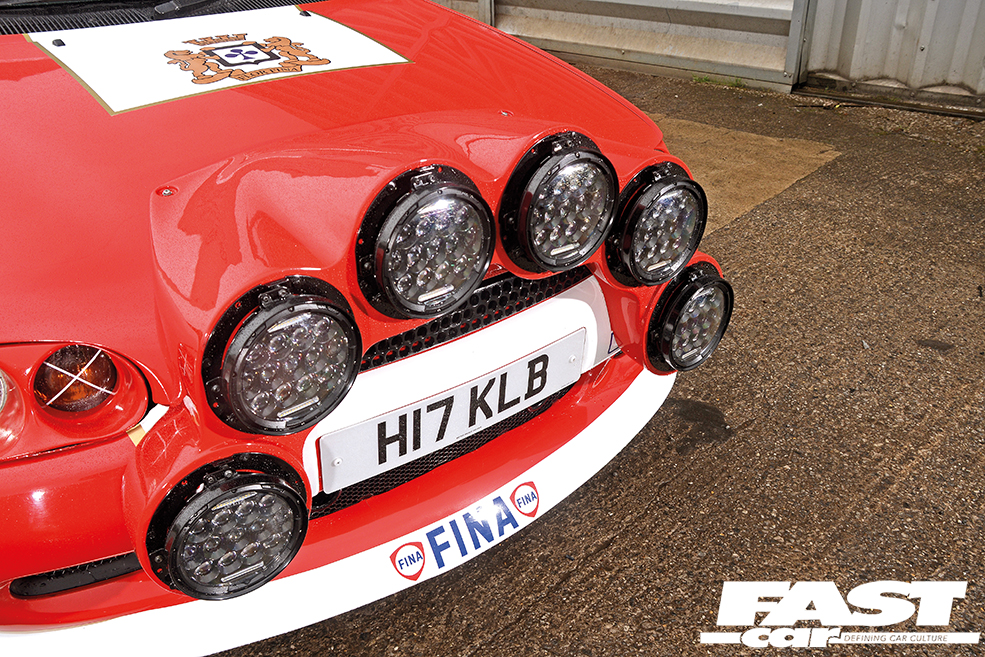 That first Escort was as a 1995 Mk6 Ghia, which Kylie duly learned to drive in and soon set about turning it into a replica of her dream car, a GTi.

Kylie says, “I couldn’t afford the insurance on a genuine GTi, so the Ghia had to do. But after owning and pampering the car for eight years and taking it to meets and shows, I was finally in a position to purchase a real GTi.”

Luckily, Kylie’s husband, Dave, had grown to share the same passion for the Mk6 Escort and didn’t bat an eyelid at his wife trawling through the classifieds as she searched for a suitable GTi they could modify together. 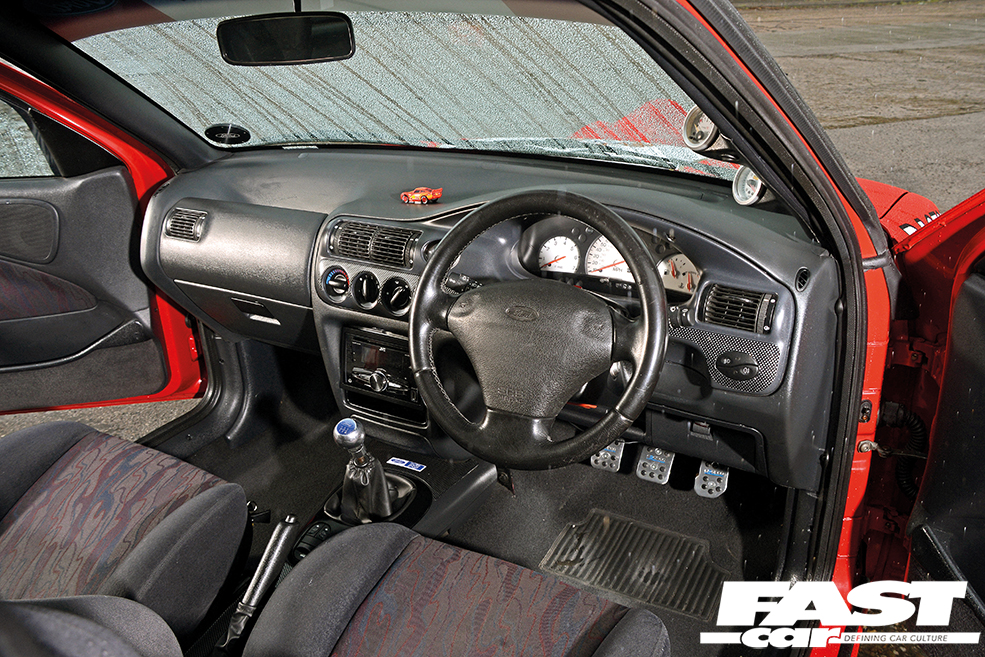 Kylie remembers, “We tracked down an original and unmodified Radiant Red GTi around ten years ago. But before we really got stuck in to putting our own mark on the car, I came across the one I have now, which was the same colour but already benefited from a few modifications.”

Despite the faded paintwork, this second Ford Escort GTi didn’t disappoint, and with relatively low mileage and stacks of history, Kylie and Dave could see the potential.

“It was clear the owner was an enthusiast because he’d added an array of desirable modifications; the Cosworth front splitter, rear spoiler, Recaro Raven Flow interior and chrome engine bay dress-up parts were all in line with our own wish-list of mods,” says Kylie. 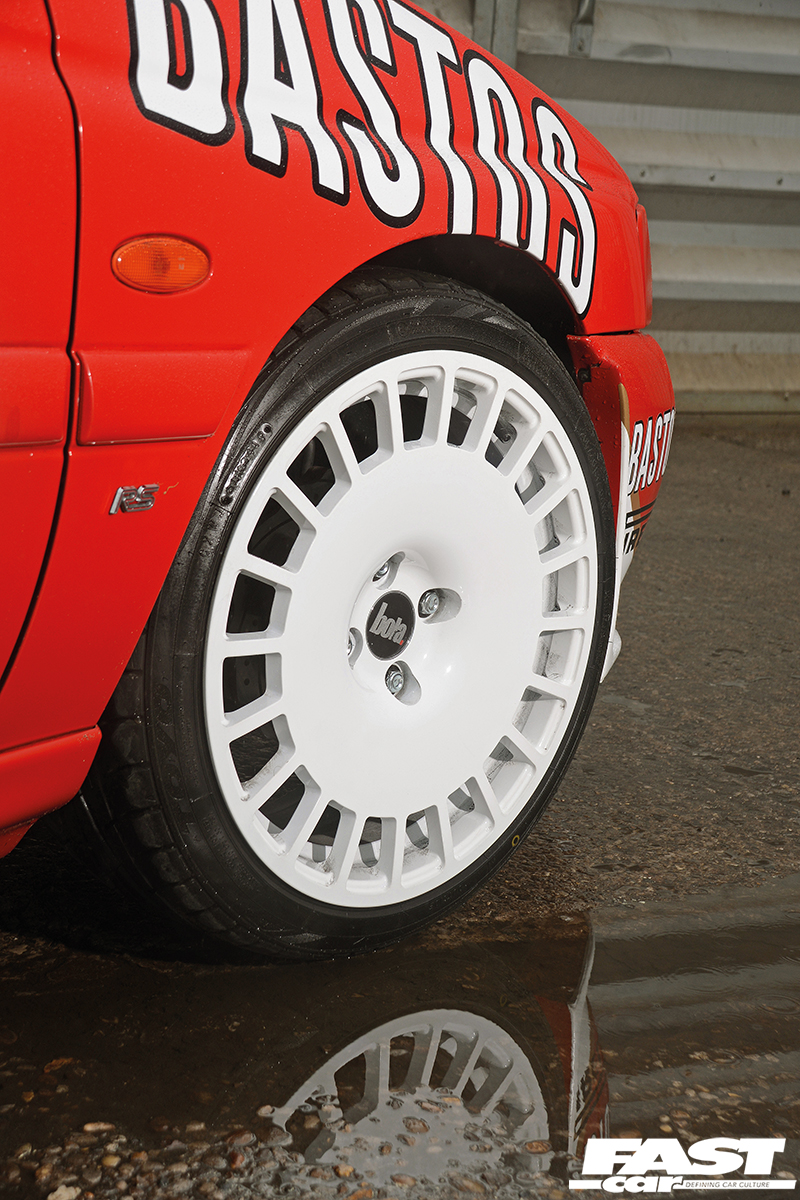 The genuine 16in Cosworth rims and adjustable coilovers helped seal the deal too, even if the coilovers turned out later to be only fit for the scrap pile. Another major plus was the fitment of an RS2000 rear beam, complete with grooved and vented discs, EBC Greenstuff pads and Goodridge brake hoses.

Once the couple had brought the Escort home, Dave was able to inspect the underside in more detail and was pleased to discover a full set of polyurethane bushes.

“We replaced the aging suspension with a new set of Gaz Gold adjustable coilovers, and within the first six months we’d also replaced all the brakes using EBC parts,” Kylie recalls.

As the car was by then approaching 15 years old, Dave took the decision to renew the ball joints, wishbones and clutch, all of which were showing their age. 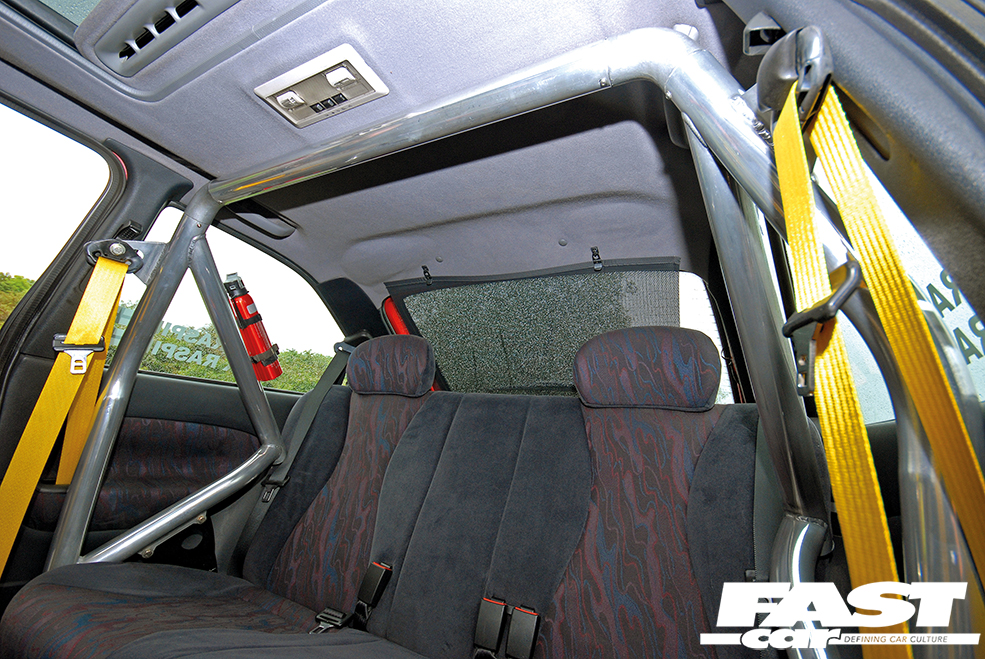 “I spent six months on my back under the car, cleaning and re-undersealing,” Dave laughs. “I painted the entire underside red and silver and fitted new-old-stock heat shields and brake pipes.”

By now this tuned Ford Escort GTi had the look of a brand-new car… Underneath, at least.

As Dave had invested so much time ensuring the underside was immaculate, it led to the tuned Ford Escort GTi only being driven in fair weather. “This meant we could work on the car and add more modifications each winter while it was in our garage,” Kylie smiles.  And judging by how this Escort looks today, it would appear the Raspins haven’t been sat around wasting time between each show season. 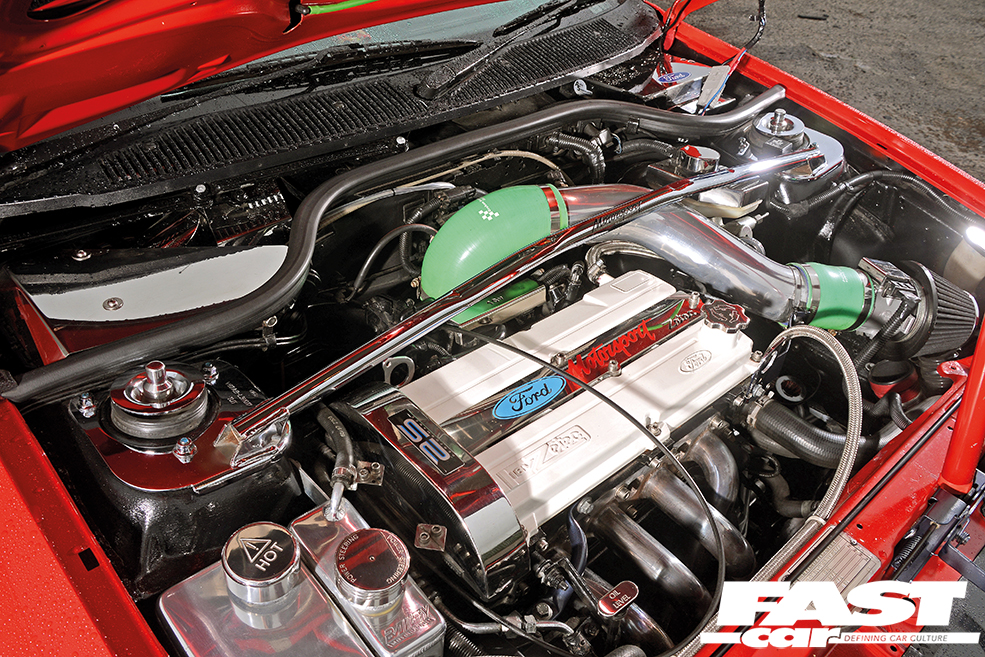 The 1796cc Zetec unit remains in situ, but its surroundings have been transformed, resulting in a highly attractive engine bay. The cream rocker cover, Bailey header tank, chrome strut tops and an array of chrome covers by Auto Specialists certainly brighten things up, but Dave and Kylie were keen to add a few subtle performance mods too.

The alloy induction pipe, Power Boost Valve, Kent cams and custom cold air feeds directed to the K&N filter all help to add a little more grunt. The addition of a full stainless Magnex exhaust system matched to an Ashley four-branch stainless manifold means this tuned Ford Escort GTi now produces a lively 150bhp. In today’s terms that’s a figure for your average lukewarm hatch, but remember, we’re talking a normally-aspirated hatch from the Nineties here, and a huge improvement over the standard car’s 113bhp. 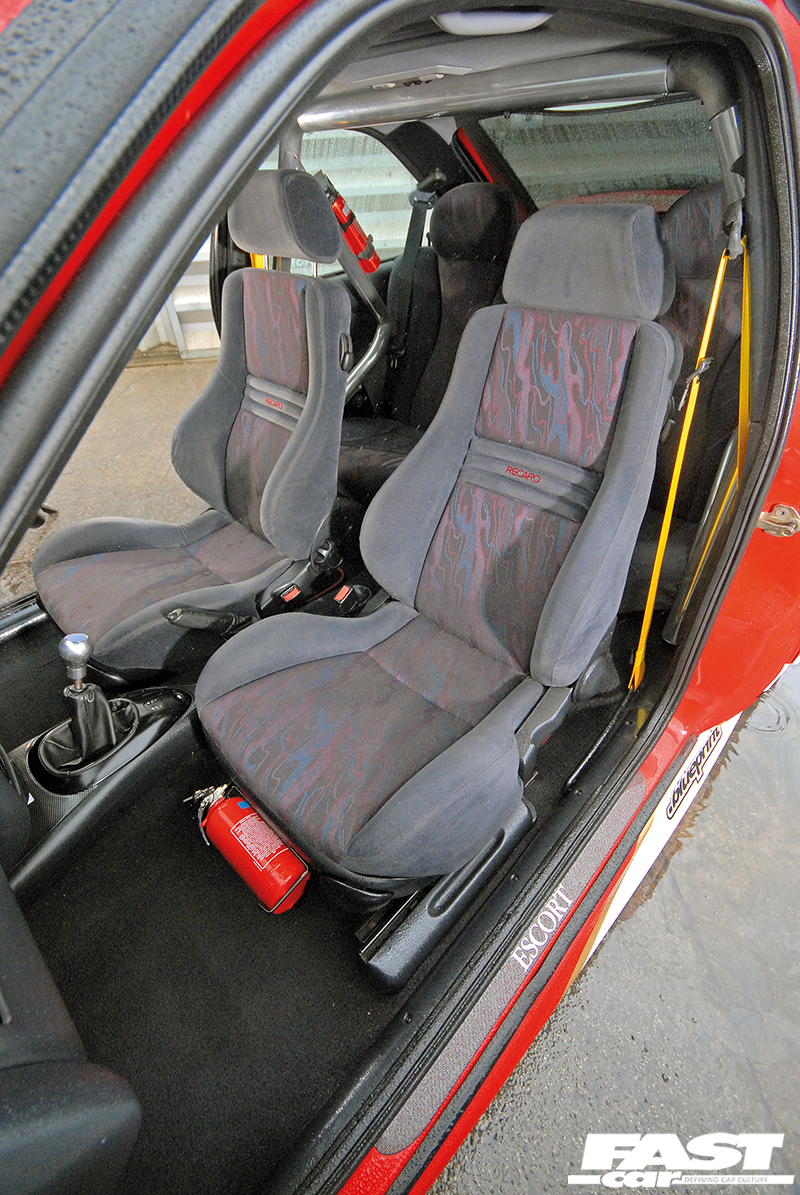 Stainless braided brake hoses and chrome strut braces enhance the nimble handling, and they look great too, spurring Dave and Kylie on to make a few improvements to the GTi’s all-too-restrained interior. An RS2000 steering wheel, pillar gauge pod, Richbrook stainless gearknob and Sparco pedals liven things up, while a carbon-effect dash and centre console trim take things further. The addition of an aluminium show cage is perhaps a clue to the direction the Raspins were heading.

A Morette twin-headlight conversion, Cosworth-style splitter (complete with hockey sticks) and Mk6 Cosworth lower rear spoiler were already in place, but Kylie was keen to ensure their GTI would really stand out from the pack. 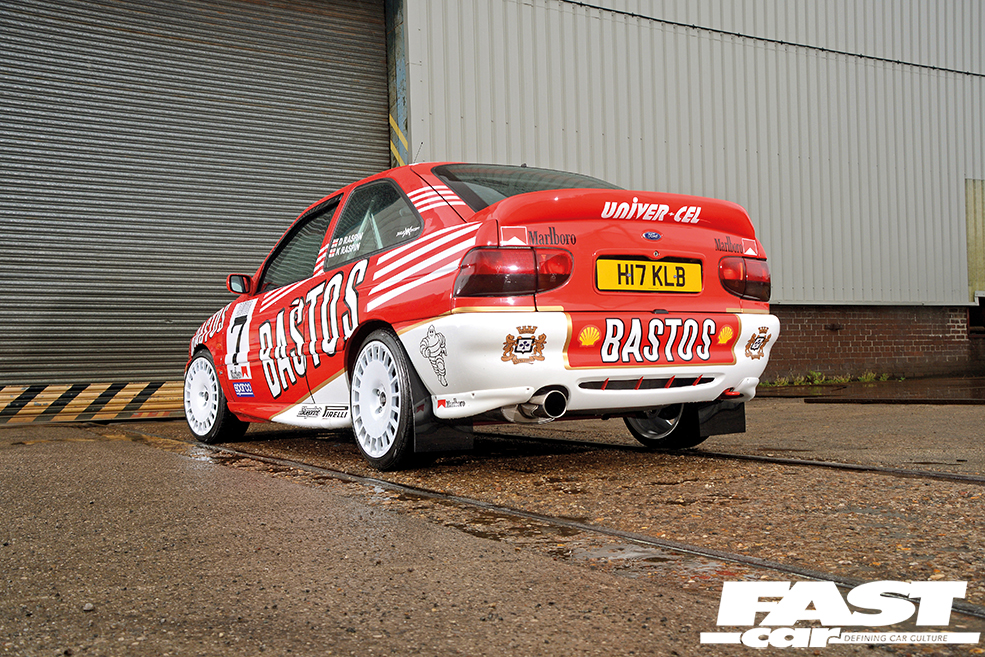 “I’d got bored of the same look, and for around 18 months we’d discussed with a couple of friends the idea of radically changing the appearance of the Escort. Initially Dave wasn’t keen on the idea of having the car wrapped, but these two friends were adamant that a wrapped Mk6 would make a nice change,” Kylie explains.

Towards the end of 2019 and after lots of discussion, the pair decided to take the plunge. Kylie continues, “I’d always liked the look of the Belgian Bastos rally team livery on Escort Cosworths. I wanted to adapt the wrap to suit the smaller features of the Mk6 GTi and to include variations of the official liveries used in the late Nineties, along with a few personal twists.”

Not a lot to ask for, then, but Blueprint was happy to take on the challenge and, as ever, the team come up with the goods. 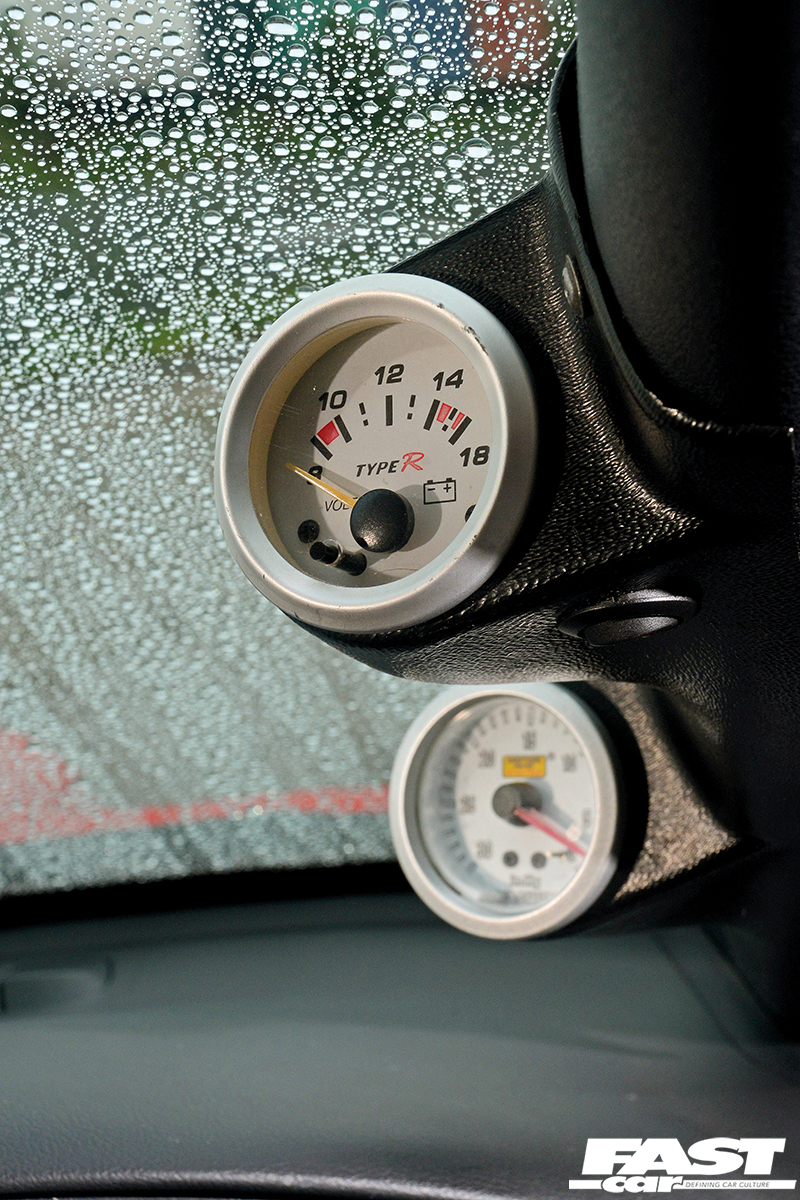 The wrap was completed in February 2020, just in time for… Well, not much really. Kylie laughs, “The new wrap looked stunning, but we couldn’t drive the car anywhere. Other people were using their newly found spare time to start new projects, but we’d almost finished ours.”

That Blueprint wrap had certainly made an impact, but the Escort Cosworth rims now looked lost alongside the bright new livery.

Kylie says, “I persuaded Dave that white rally-style rims would suit the wrap better, and we opted for a set of 17in Bola B12 alloys with Toyo tyres. They were a good choice and we’re really pleased how they look on the car.”

Next it was Dave’s turn to make a suggestion, in the shape of front spotlights – the six-lamp rally-style pod suiting the Bastos theme perfectly.

“I chose Daymaker-style LED lights for a slightly different look; they were fitted by a local garage. The Rallyflapz mud flaps and extra stickers we added soon after,” Kylie says. 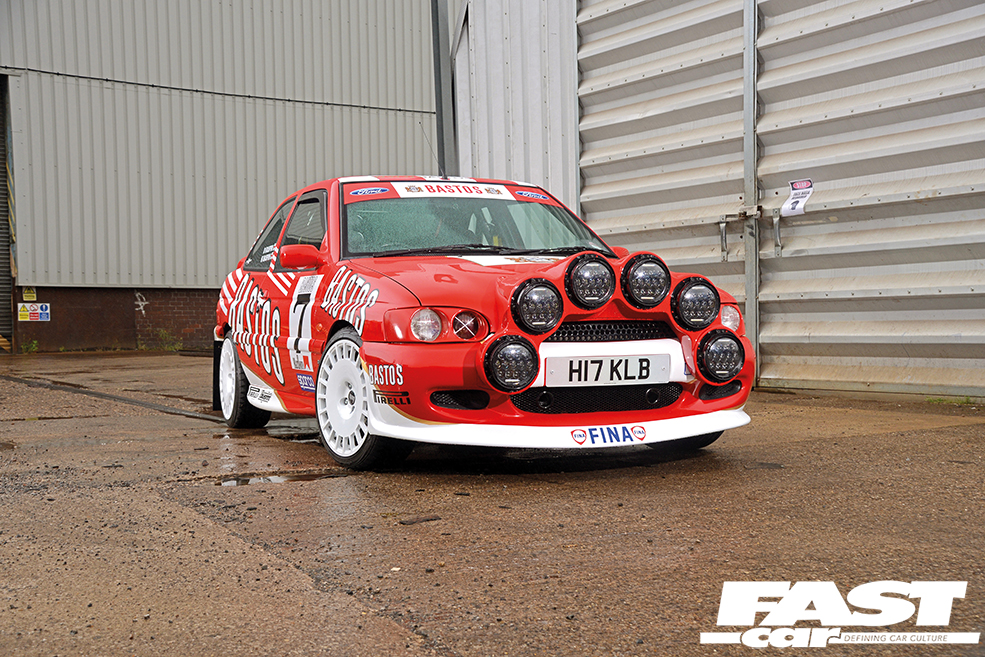 Despite this Escort only ever being driven in the dry, you may have spotted that it was far from dry at the time of our photoshoot. We can only applaud Dave and Kylie for enduring the damp weather in their pride and joy.

In fact, their enthusiasm for this car is quite infectious, and it’s great to see a couple who share the same passion in equal measures.

“It’s Dave’s hobby as much as it is mine, and he still enjoys cleaning the car or tinkering with it whenever he gets chance. I love the nostalgia of driving an older car with go-kart-like handling, though I’m not sure my spine would agree,” Kylie smiles.

As for a follow-up project, Kylie would opt for a Mk6 RS2000 F2 Maxi replica. We suspect they may be needing a bigger garage…

Gaz Gold adjustable coilovers all round, chrome front and rear strut braces, poly bushes all round