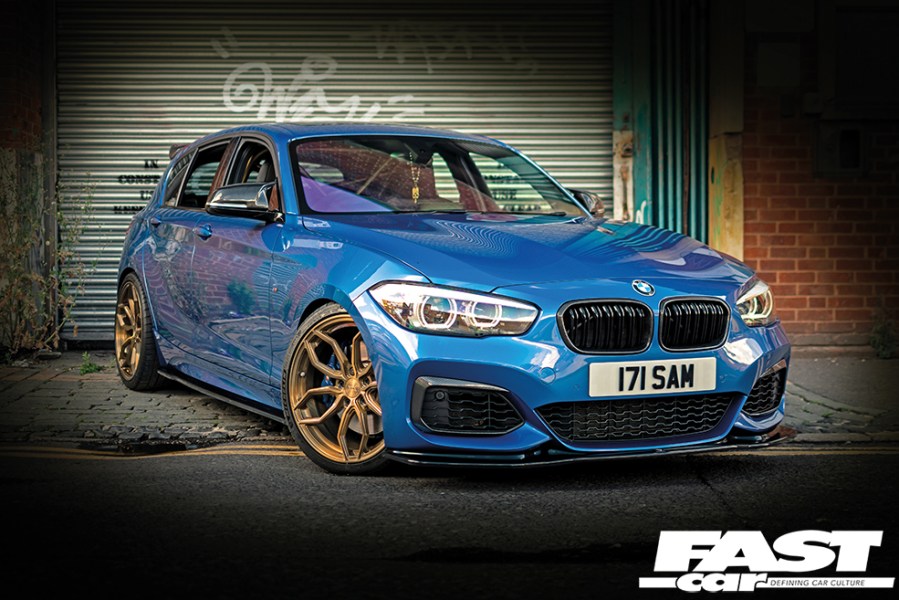 With BMW opting for AWD and a four-cylinder engine for the top of the line 1-series, we think panic buying the facelifted F20 M140i is the way to go, and that’s exactly what Sam thought with his tuned example.

Recently the mainstream media has been awash with reports on the shortage of HGV drivers in the UK. TVs, tabloids and tablets have been rife with pontification upon the contributing factors: Brexit with a mass exodus of drivers back to the EU, a change in export rules and paperwork, pay and condition issues for some. Potentially, this could be good news for existing drivers as the manpower shortage increases demand and therefore pay.

The basic supply and demand theory is one we petrolheads are well aware of. How many times have you missed the boat on a certain model just before the prices go stratospheric? Perhaps you’re the smart one who bought an E36 M3 when they were £3k, and now your pension fund sits pretty in the garage. Some vehicles are instant classics from the off as fabled M car heroes, others have less obvious halos, and part of their charm can be in their subtlety. E24 635CSi, E34 540i, E36 328i… we could go on. Could the understated BMW M140i be a future classic in the making? Given that the latest top of the line 1-series uses AWD and a four-cylinder engine, it adds further fuel to the fire if the F20 turns out to be the last of the rear-wheel-drive, six-cylinder über hatches. 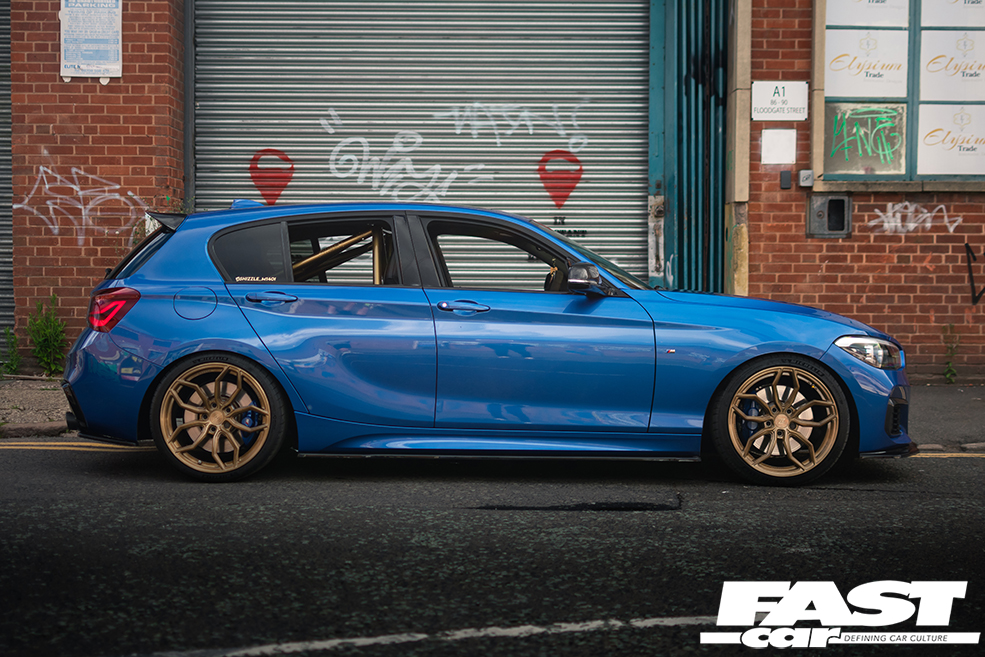 One person with his finger on the pulse in both the professional and automotive sense is the 31-year old HGV driver and owner of this gorgeous tuned BMW M140i, Sam Brookes (shizzle_m2c). Sam’s car-owning journey is a familiar one, starting small but with the modifying bug kicking in at a tender age: “I don’t think I’ve ever owned a standard car, from Max Power-style body kits on my first car, a Vauxhall Corsa SXi, to the serious performance build that is my Mitsubishi Evo 9; I’ve always loved modifying cars and putting my own stamp onto them, each having their own style,” he says.

Bavarian metal has always occupied a special place in Sam’s heart, though, with his grandfather owning a series of BMWs throughout his childhood. Sam’s personal first BMW was a 2007 E61 535d Touring, which ticked the requisite practicality and pace boxes at the time, but his current BM is something rather more exciting. “A friend had purchased an M240i and took me for a quick spin in it. I instantly knew I had to have a car with a B58,” he grins. “I went over to the Sytner dealership in Oldbury that same evening to view an M140i they had on the forecourt. However, when I got there, someone had just left a deposit on it. The sales assistant found another vehicle for me at a dealership in Sheffield. It was the perfect colour and spec I was looking for, and at just six months old, I couldn’t pass it up,” he smiles. 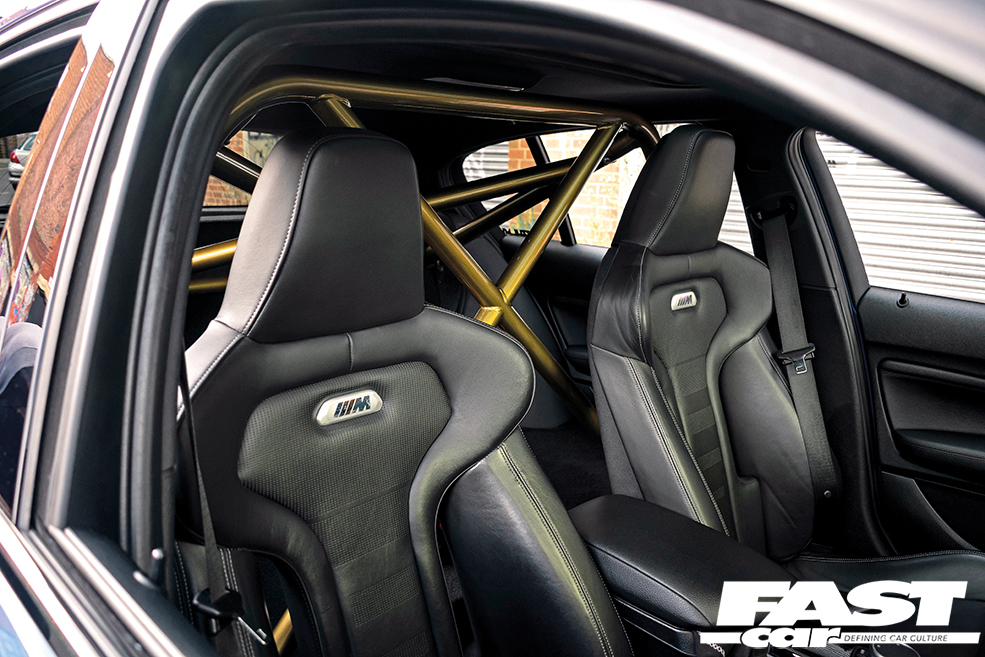 Sam fully intended to enjoy the car in stock form as a sensible stablemate to his aforementioned Evo 9. However, the slippery descent into modifications, which we are all too familiar with (and fully approve of), started just after a month after taking delivery. Sam liked the overall flavour of the stock car and was keen to retain the spirit, but there were certain areas he wanted to enhance.

Styling was the first on the agenda, and Sam explains: “In stock form, the BMW M140i is a very plain-looking car, and there isn’t much that sets it apart from other models in the range. I decided to go for a few carefully chosen exterior modifications to rectify this and achieve a vibe that was a little more purposeful”. The stunning factory Estoril blue contrasts nicely with the darkness of the AutoID carbon kidney grilles and M-style door mirror covers, while the R44 Performance carbon bumper canards and rear spoiler continue this theme. A Maxton Design gloss black front splitter and side blades are complemented handsomely with a Rieger Tuning rear diffuser. A chameleon front windscreen tint with 30% side tints tastefully transform the glass. 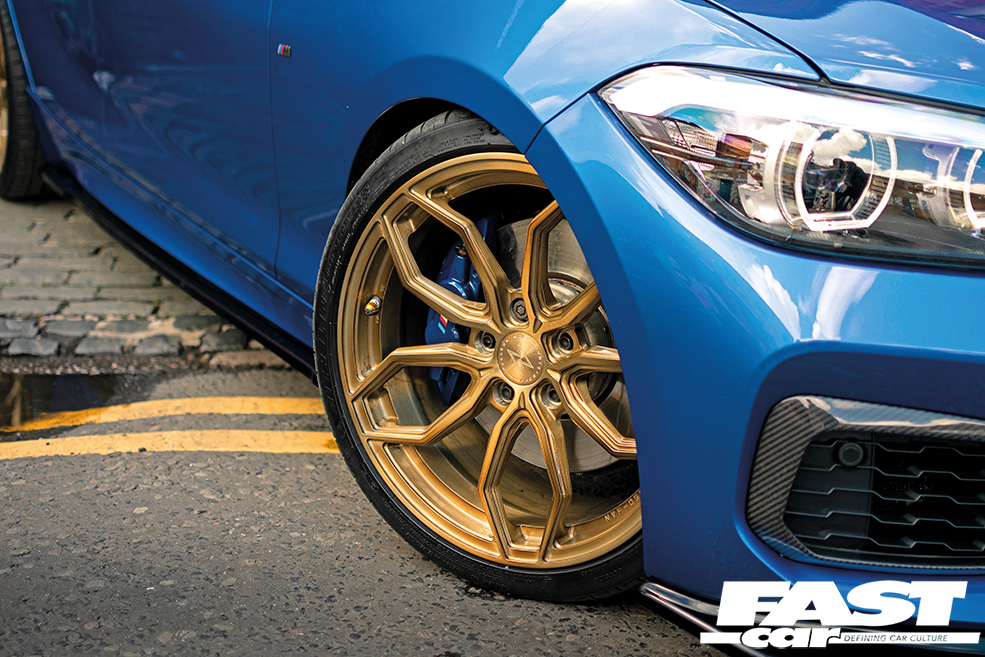 With the styling package complete, some stance and a set of wheels were the order of the day, and Eibach Pro-Kit springs get the car sitting purposefully over the distinctive 19” staggered NV Forged NVF-05Cs. “Initially, I wanted to go for a set of OZ wheels, however, quite a few other owners were opting for this wheel. I wanted something more original while not compromising on weight or performance,” says Sam. “When I saw these NVs and learnt that they were available in custom offsets and wheel finishes, I just knew I had to have a set.” He plumped for brushed gold, and Michelin PS 4 S tyres complete the inspired rolling stock package.

Sam started to research the impressive gains that were being achieved by the B58 engine with maps, so that was his next port of call. A custom Stage 2 remap by NVM catered for the increased breathing capacity from the combination of a Pipercross panel filter, a Scorpion de-cat downpipe, and 3” cat-back non resonated exhaust with ceramic black tips. Sam is a big fan of Scorpion products, having had a few of them on his cars over the years. “I’ve always rated Scorpion’s products, they are of very high quality, so I decided to go with a full system from them to keep everything uniform.” An XHP gearbox map ensures that the gearbox shifts are optimised for the revised power figures of 468hp and 472lb ft, seriously impressive numbers that make this tuned BMW M140i a full-on performance machine. 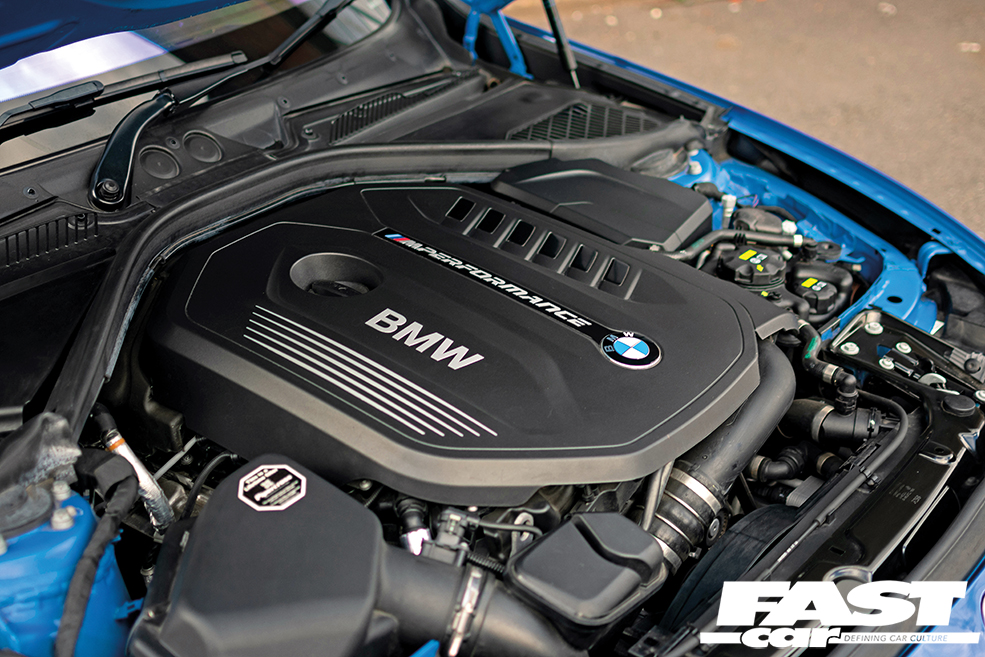 For Sam, this impressive rise in performance necessitated the next modification, a Wavetrac LSD, and an underbody brace and Powerflex inserts were also drafted at this juncture. “The Eibach kit gave the car an aggressive stance, and it drove nicely on the road, but with the added power of the Stage 2 package, it really did struggle for traction,” he explains. “I opted to go for a Wavetrac LSD which helped massively, and the underbody brace just helped keep the rear end in check. As a whole, the chassis mods have been transformative.”

With the looks, handling and wheels on point, Sam’s attention now turned to the interior. Inspiration was sought from the M4 GTS with its rear bench delete, half-cage and figure-hugging seats. SW Motorsports supplied a T45 bolt-in half-cage which, with its Clubsport rear seat delete, creates a neat, aggressive and functional rear cabin space. An M4 GTS fire extinguisher bracket and BMW fire extinguisher are the icing on the cake. An F80 M3 donated its front seats to the OEM+ cause, and they are fully functional, retaining electric adjustment and heating. The attention to detail and motorsport-inspired vibe continues with an M Performance LED race display steering wheel, M Performance gear selector cover, gear surround, handbrake cover and gaiter. Gold-coloured vent surrounds are a subtle way of tying in the cage and wheels to the cockpit and help to make the different elements of this build flow. “My favourite mod has to be the roll-cage, there’s just something cool about it when you’re driving the car, and you glance in the rear-view mirror and can just see it. I always find myself driving around with the rear windows down now too to show it off,” Sam grins. 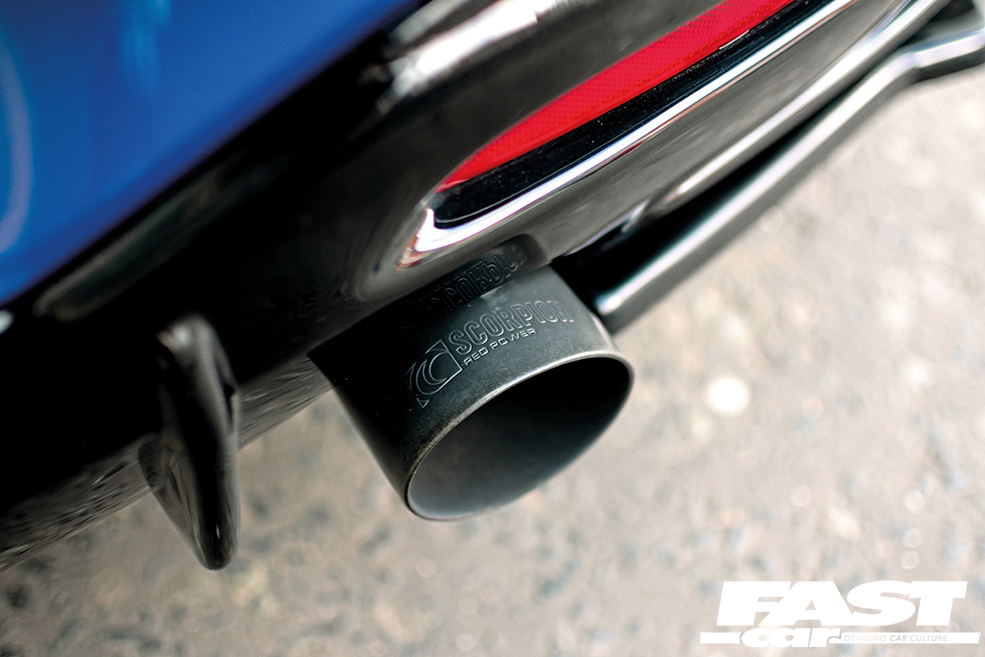 With the project taking nearly two years to complete with obsessive research and execution, will our savvy Sam be garaging it and waiting patiently as the F20 M140i becomes the next big thing? Well, no, in a word. “I feel this M140i is the perfect balance between style and performance, and I’m delighted with the outcome, but I wanted something a bit more track focussed and planted out of the box,” says Sam. So, where do you go from a full-on tuned BMW M140i? In Sam’s case, a Long Beach blue M2 Competition has replaced his 1 Series, and we can’t say we blame him for making the switch to M car territory. He’s not done modding, mind, and with the M2 build underway, we have a sneaking suspicion this won’t be the last we hear from Sam, and if it’s anything like this awesome M140i, you know it’s going to be special. 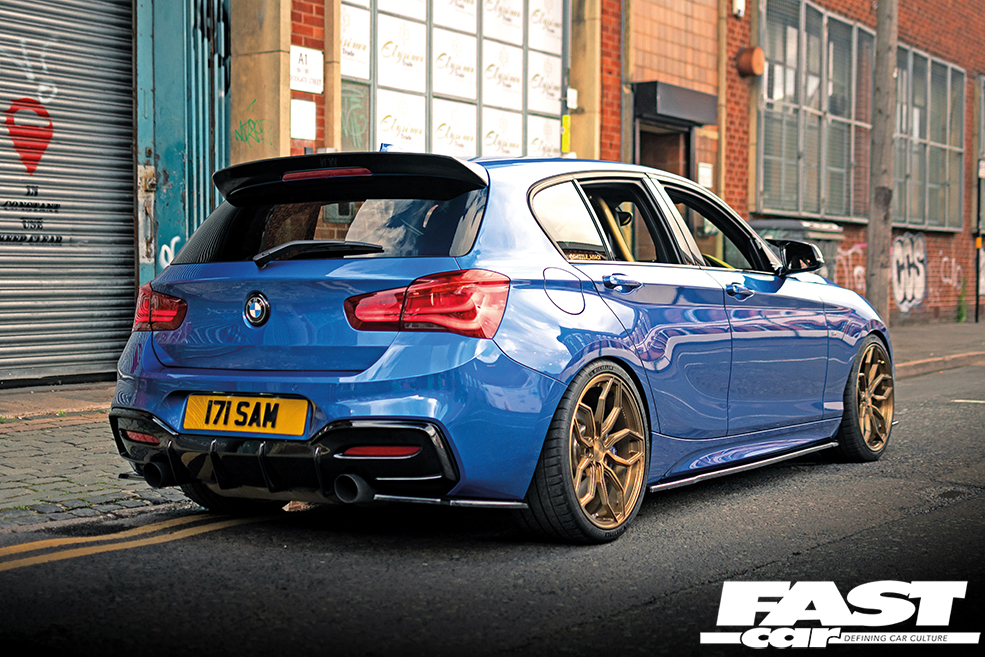