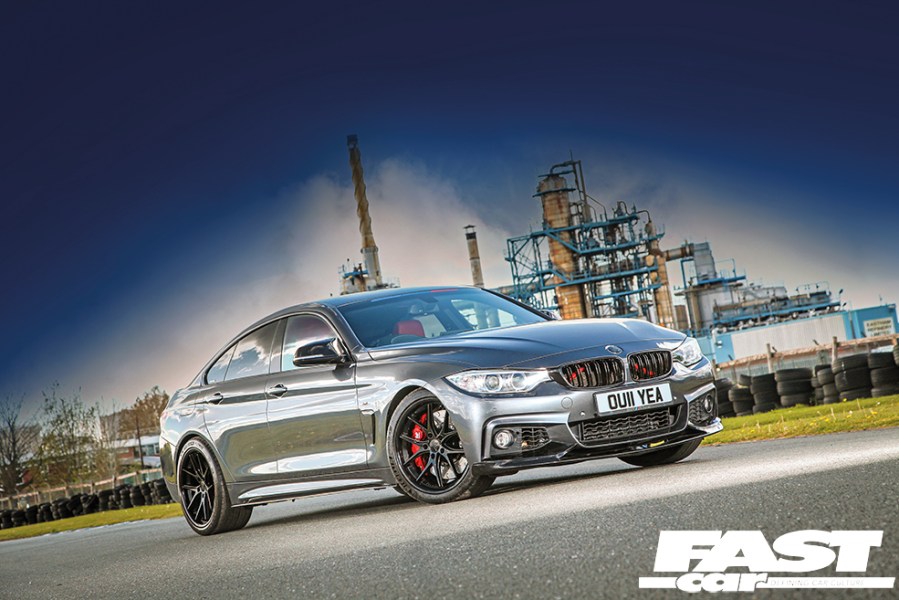 When lifelong petrolhead Radovan Haluska made the move to a BMW 435d, the amount of twist on offer inspired him to start his first ever tuned car journey.

Twist. Grunt. Pulling power. Torque is one of those terms that gets banded around a lot when we talk about the outputs of automobiles, but, for many people, it’s shrouded in mystery – why have this number as an expression of power when the horsepower figure is often quite different? How can that make sense? Well, in essence, what it comes down to is this: horsepower defines how quickly an engine’s work can be delivered, while torque refers to the amount of work it can actually do. In many production cars, the two peak figures are broadly similar; some cars have much higher horsepower numbers than torque (high-revving Honda VTECs, for example), and some engines boast a significantly larger torque figure: specifically, we’re talking about diesel engines here.

Now, the very idea of a performance diesel engine can be tricky for some folks to reconcile. Sure, in the last couple of decades, technology has advanced at an incredible pace, and nowadays, the market is stuffed with rapid dervs that carry no stigma. However, to old-school enthusiasts, it can be hard to forget that the roads in the 1990s were clogged with plodding Vectras and Mondeos, their diesel engines chosen for frugality rather than any semblance of entertainment. These are cars filed away under ‘no thanks’, their sluggish motors belching black smoke and rattling like agricultural machinery. 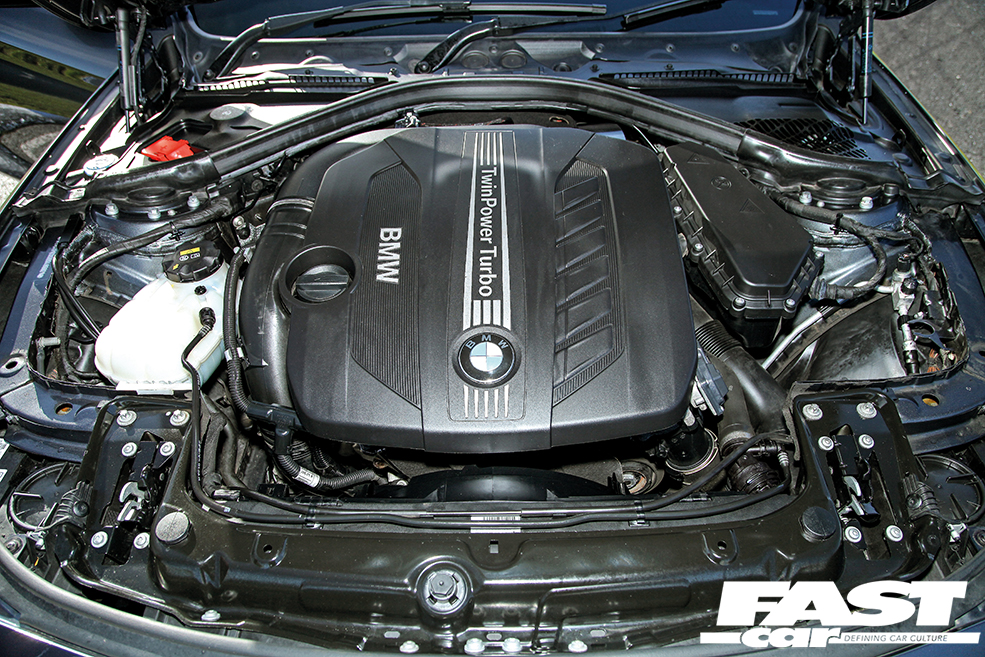 It’s perhaps time to forget all of that unsavoury stuff, however, as a new breed of modders is increasingly switched on to the potential entertainment possible after filling up at the black pump. Radovan Haluska (@2rado1) is a case in point: having always owned petrol-powered cars before, this  tuned BMW 435d Gran Coupé has come as something of a revelation. “My first car was BMW E36 Compact 316i,” he says, “and to be honest, I’ve never modified any of my previous cars.”

The appeal of the diesel must have been really quite something to encourage him to dip his toe in these waters, then? “Yes, I’d always driven petrol cars before, and it got to the stage where I was just paying too much for petrol,” he reasons. “I was always complaining about how much I was spending on fuel bills, and one of my friends lent me his VW Golf 1.9 TDI to try. It was the first diesel I’d ever driven, and I loved it straight away – the torque was amazing, so after that, I changed my mind and became a dirty diesel person!” 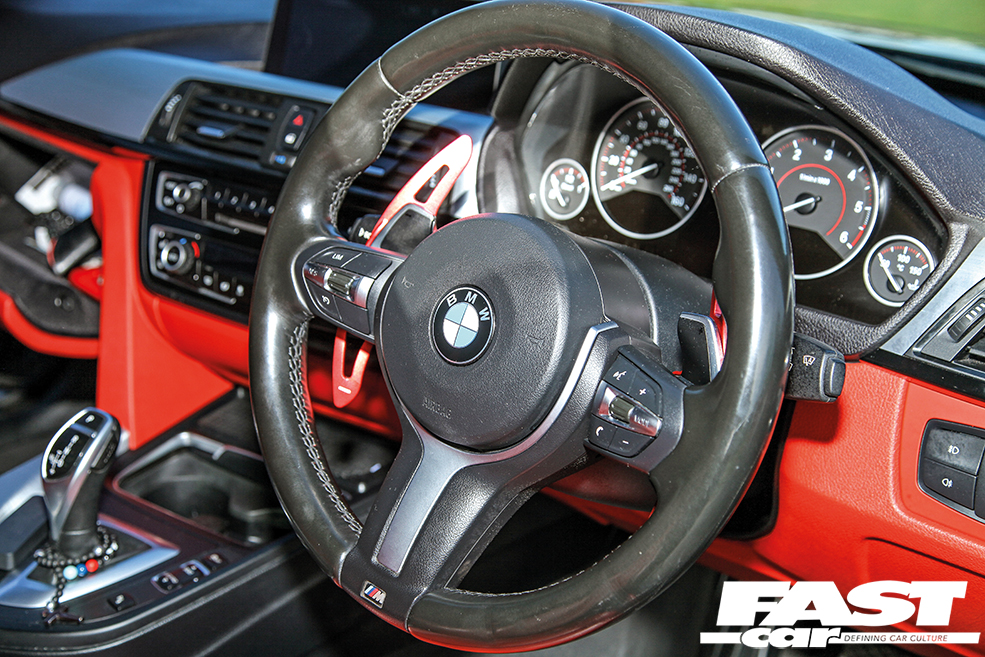 In the twinkling of an eye, Radovan was picking up a Golf TDI 150 of his own, and it’s fair to say the enthusiasm for heavy oil rapidly escalated into something bordering on obsession. The combination of readily exploitable torque and a few extra quid in his back pocket proved to be a truly heady mix, and the Golf was followed in time by a SEAT León FR TDI, before making the jump to an Audi A8 4.0-litre TDI V8, which was something of a statement. However, with all of the colossal grunt this car brought into play, he felt that the motor itself was too big and heavy to make for a truly dynamic car and the A8 itself was too bulky to be fun… and at this point, a long-held yearning came into play.

“I’ve been into BMWs all my life,” he assures us. “Ever since my neighbour bought an E30 320i when I was 10 – OMG, I fell in love with that car straight away! And now I was looking for something that was not too big but not too small, and very fast… and here we go, I found the BMW 435d Gran Coupé.” 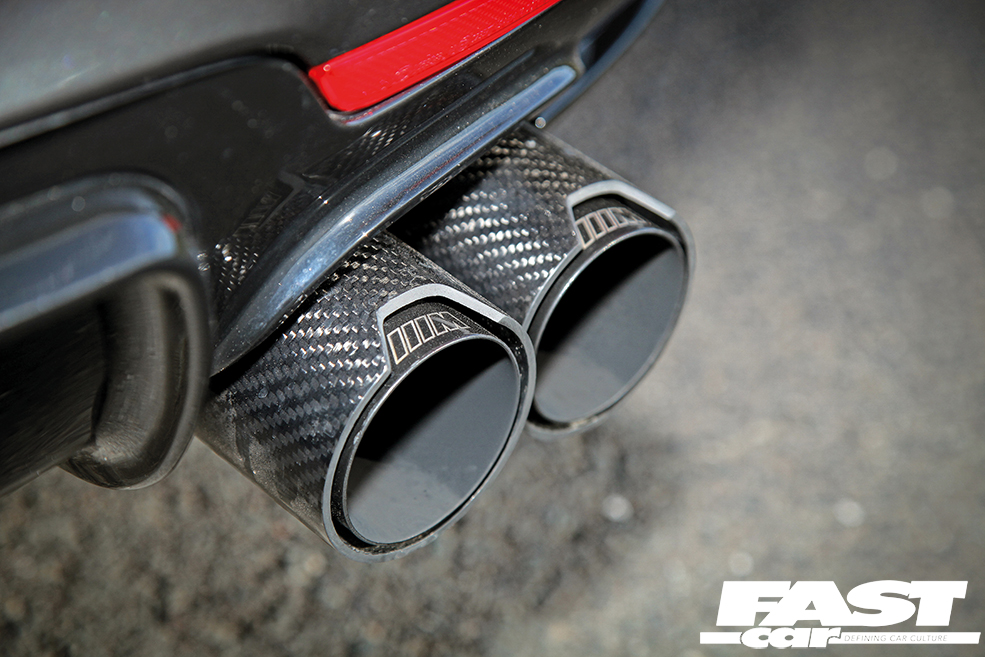 The way the car looks was a big draw for Radovan, and we have to say we agree. In a world filled with identikit SUVs, it’s always pleasing to find someone doing the non-obvious thing and choosing a saloon car. Add to this the recent-ish trend for creating saloons that look like coupés, and the picture is complete. In the case of the first-gen F32 4 Series, mixing in an extra set of doors to create the F36 was a real power move – a jack of all trades, but a master of all too.

“To me, it looks so special,” he enthuses. “And of course, it’s a very, very strong diesel car, even with stock power.” It’s worth considering that stock power for a moment, as the engine range in this generation of 4er was an interesting one. There were half-a-dozen petrol engines on offer, ranging from three-pots to twin-turbo straight-sixes, with three diesel motors in various states of tune according to model strata: the most powerful non-M petrol was found in the 440i, a 3.0-litre twin-turbo offering 326hp and 332lb ft, and the derv equivalent of this is the 435d. In factory-standard tune, the horsepower is slightly lower at 313hp, but the torque is way, way higher – a meaty 465lb ft. And as we’re soon to discover, Radovan’s 435d is now some way from factory-standard… 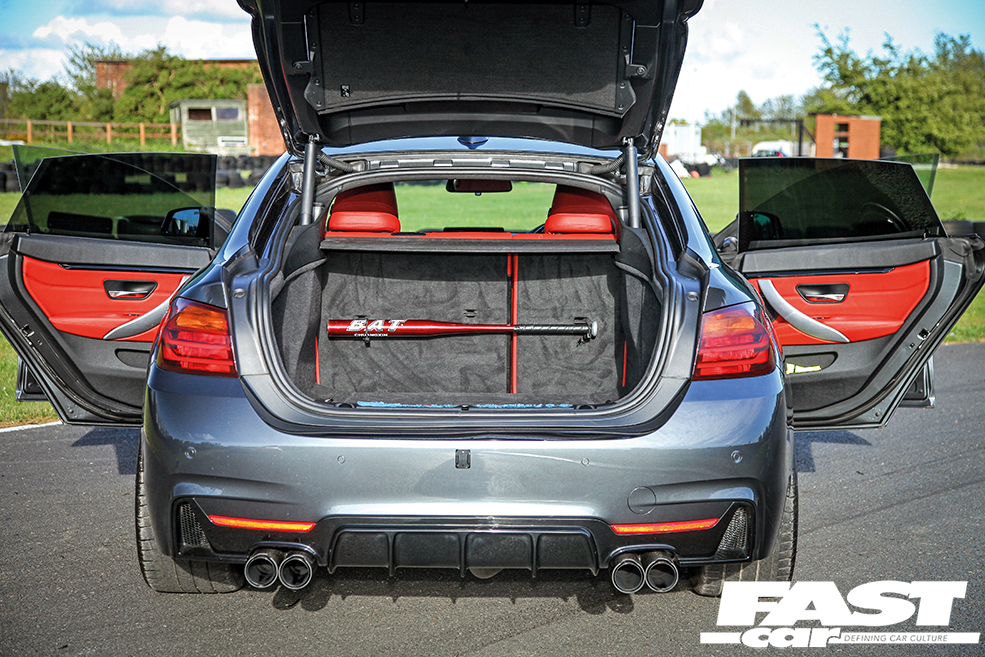 “I bought the car from a private seller on Auto Trader,” he says. “It was totally stock, low-mileage, and in stunning condition.” So what was it that prompted him to start modifying it, having never done such a thing before? It all comes down to that old mantra: power corrupts. Having found himself galloping on a veritable stable of energetic horses, Radovan just wanted more. And more, and more…

“After a couple of months of driving it around and enjoying it, the stock power just wasn’t enough for me,” he laughs. “So the first thing I tried was having a custom Stage 1 map done, which did a lot to increase the numbers… but that still wasn’t enough, so I quickly upgraded to Stage 2. This was the point where hardware upgrades were needed to complement the mapping, so I upgraded the front-mount intercooler and swapped out the turbos for a pair of hybrids, and with some more custom mapping to Stage 2+, the car was putting out 436hp and 634lb ft.” 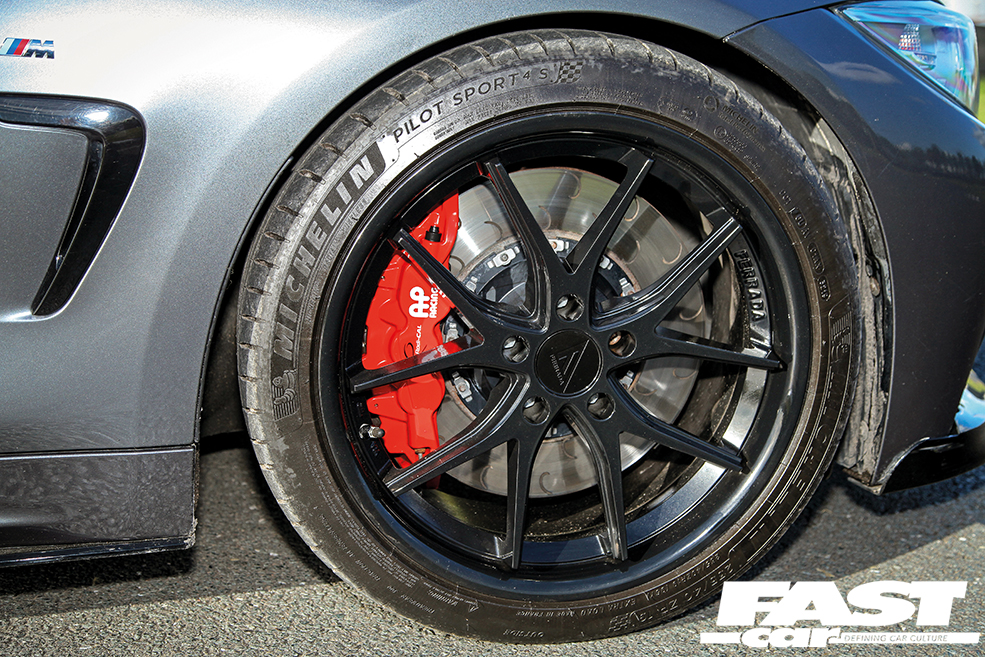 These really are astonishing numbers, and again we need to put each one in context to highlight just how muscular this level of twist is. If we look at that peak horsepower figure, we know that it’s comparable to what can be found in, for example, an Aston Martin V8 Vantage or a Jaguar F-Type V8… but considering that torque figure, that aligns it with a Lamborghini Urus or a Rolls-Royce Cullinan. Sports car horsepower, with premium SUV torque. An impressive package, right?

With all of these under-bonnet shenanigans going on, Radovan was keen to modify the car as a complete package rather than simply throwing a bunch of extra oomph into the stock chassis and hoping it’d all be OK. He wanted to future-proof the specs and ensure that the car was capable of deploying and exploiting all of this newfound energy effectively and efficiently. “The suspension was the next thing on the list,” he says. “Frankly the standard suspension was crap, but the handling is great now that I’ve fitted the Bilstein B16 coilovers. And my favourite modification is definitely the brakes, they’re so powerful.” The choice here was an AP Racing setup, comprising six-pots up front and four-pots out back, and the levels of retardation are properly devastating. Peer through the wheel spokes, and you’ll see that the C-hook discs are improbably huge… and speaking of wheels, Radovan’s made an inspired selection here. The Ferrada FR2 is something not often seen on the scene, its deep concave design mixing with a floating spoke effect. “The quality is great, and so was the price,” he says. And the rims add to an aesthetic package that’s largely OEM but with a few choice tweaks: “I’ve fitted a front splitter, side skirts and a rear diffuser for the quad exhausts, I did that myself.” 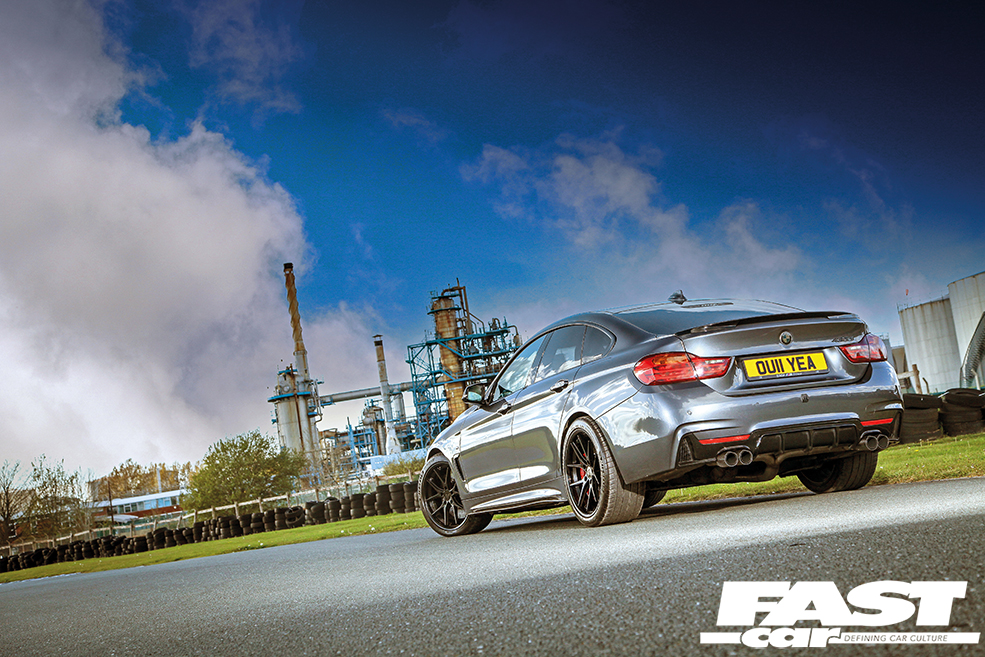 That quad-tail exhaust system is perhaps the biggest statement on the tuned BMW 435d, and certainly its most vocal. If there’s one criticism petrol fans often have of diesels, it’s that for the most part, they just don’t sound that great, but Radovan’s worked hard to address this. His exhaust system is a straight-through setup in the truest sense of the term – no DPF, no cats, no rear box, it really does bellow through its quartet of carbon M-branded tips. You hear him coming a long time before you see him… and then you don’t see which way he went.

This whole project, which has taken around eight months from start to finish, represents an interesting and unexpected chapter in this lifelong petrolhead’s sphere of experiences. He never saw this passion for ‘dirty diesel’ coming, and it’s clear that there’s no way back. The black stuff has corrupted him in the best possible way. With all of this power and torque to play with, Radovan’s still not satisfied. “I’ll easily be able to get more out of it if I upgrade the fuel pump and the cams,” he grins. Which sums up the whole process, really. Power corrupts – and torque? Torque is clearly an addiction.