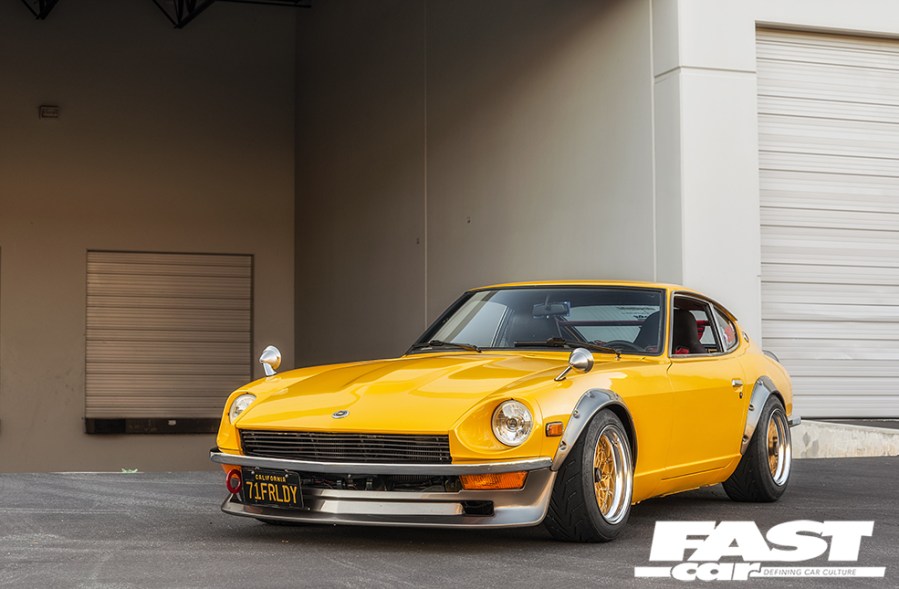 Taka Sato’s modified Datsun 280Z is truly a joyful thing; not just beautiful to behold, but with a top-spec chassis and thrills for days from its howling old-school six-pot motor. Who says you can’t have it all?

Taka Sato has an admirable attitude. “No-one said you can’t take a show car to the track – or vice versa,” he says with a smile, and it’s that sentiment which sums up the ethos of this startlingly yellow Nissan. Form and function working in harmony, and given that Taka built it all by himself in his garage, he’s earned the right to do whatever he damn well pleases with it – it’s been engineered the old-school way for rasping nat-asp six-pot thrills, and it’s also flawlessly finished to an Insta-like shine. Truly the best of both worlds.

Z-cars always make for fabulous project bases; it’s the combination of their gorgeous profile, increasing obscurity and bulletproof engineering. And there aren’t many cars which can convincingly pull off the double over-under shotgun exhaust look, are there? 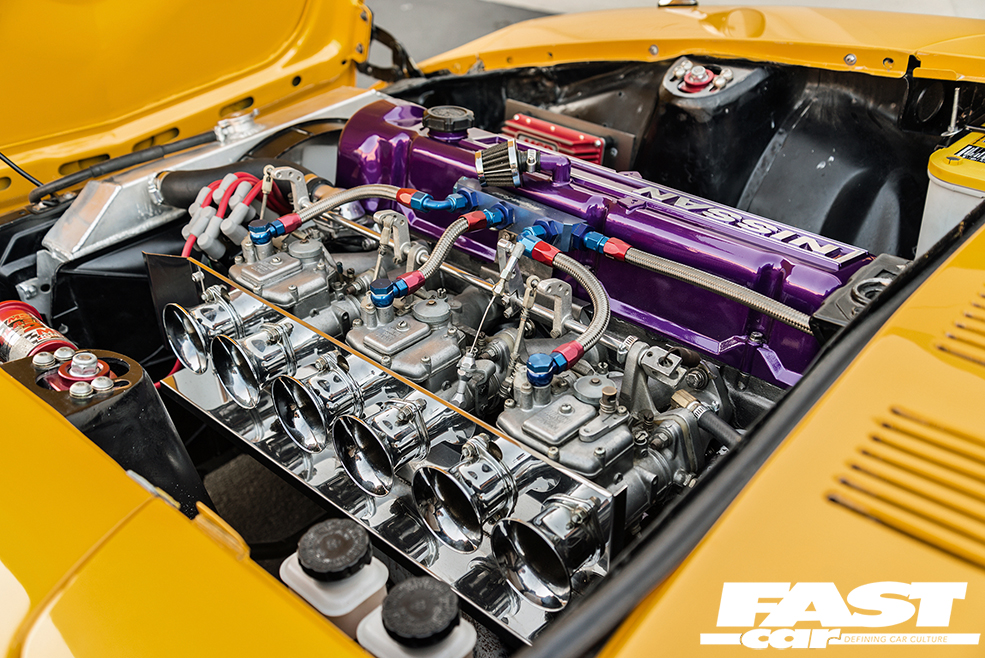 Our California-based Z-twiddler has an interesting history with Japanese cars, the leading lights in his affections prior to this Datsun being principally Hondas, with the odd Toyota thrown in for good measure. “I got into the car scene back in 1995, during my high school days when the Honda scene really dominated the streets,” he explains. “My friend’s cousins all owned Civics and Integras and used to race up the canyons, which I thought was so much fun. Thats when the need-for-speed bug bit me – and the rest is history! Over the years my projects have included a 1992 Honda Civic, a ’92 Acura Integra with an LS-VTEC swap, a ’97 Nissan 240SX with an LS1 V8, and an ’85 Toyota Corolla AE86 with an SR20DET.” 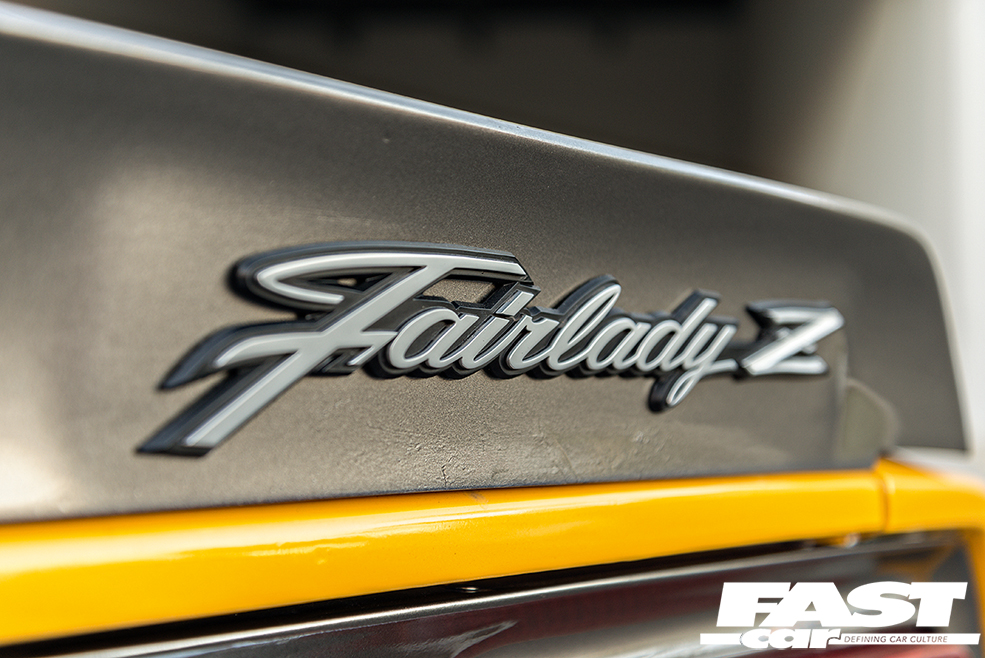 Safe to say he likes throwing racy engines into retro Japanese tin then, so it’s interesting to note that in the case of this Z-cars’s six-shooter, it’s old-school tuning all the way. “The motor was one of the first things I tackled,” Taka explains. “When I bought the car, I towed it home from San Jose, CA, and immediately started tearing it down in my garage to get the rebuild process started as soon as possible. I pulled the L28 motor straight away and gave it a rebuild – although I did later blow it up and have to rebuild it again!” The spec now is formidable – the first thing that leaps out at you as you raise that clownishly long bonnet is the triple Mikuni carb setup, the 44PHHs gulping and gargling fuel like filthy mermaids. The fully balanced motor is also running Isky Racing cams, adjustable Tomei valve gear and a custom fuel rail, along with uprated cooling and electrics. Think of it as a sympathetic massage rather than a concours-correct tune, but the results are inarguable; the way it barks through that sonorous Fujitsubo Legalis R exhaust is little short of magical. 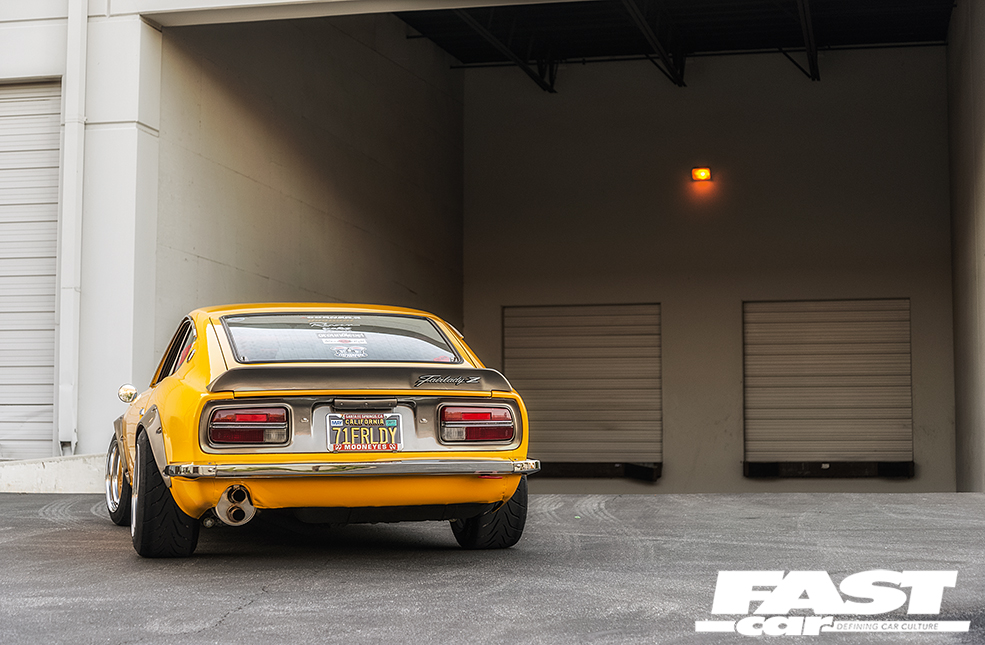 Given the additional horses being unleashed, Taka sensibly took the opportunity to upgrade the transmission too; a close-ratio 5-speed from a 280ZX was roped in for cog-swapping duties, backed up by a stage 2 clutch and lightweight flywheel from Competition Clutch, a Kaaz 1.5-way Super-Q LSD, and an R200 3.90 diff with a solid mount from Arizona Z Car. 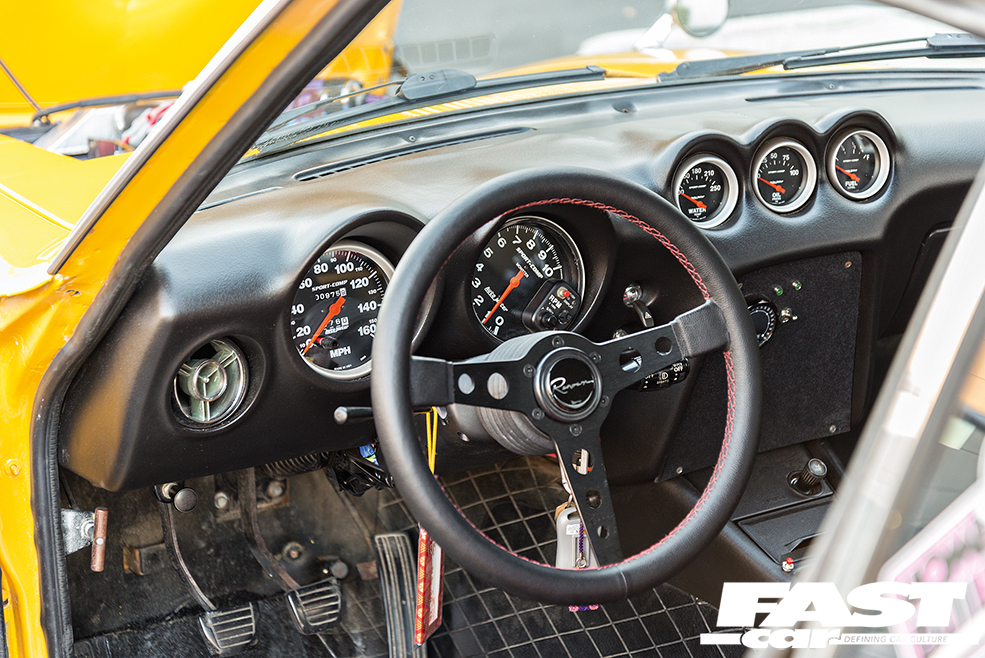 As it turns out, Arizona Z Car are good people to know if you’re upgrading an S30, as they’ve got all sorts of tantalising weapons in their arsenal. Taka’s coilovers came from there, as well as his billet moustache bar – which, despite our initial hopes that it would be some sort of hipster grooming device, is actually a beautifully machined and very shiny diff mount. These gleaming toys inspired Taka to go all-out with the chassis upgrades, opting for a set of Toyota 4-pot brakes with Brembo discs and pads up front; the rear still wears its drums, but now beefed up with Porterfield Racing shoes. He then got on the blower to Techno Toy Tuning, who are the go-to name for Stateside retro JDM tweaks, placing an order for their revered front and rear lower control arms, track control rods, outer tie rods and roll centre adjuster. As such, the chassis is now as tight as a drum and more than capable of fulfilling its determined driver’s track aspirations. Taka certainly exploits it to the full, as evidenced by his colourfully exploding engine which let go in a big way on track, leading him to the top-flight rebuild you see before you.

But like he suggests, this car needs to wear two hats. It’s not just a capable circuit miscreant, it’s also a drop-dead-gorgeous beauty queen. And while every other element of the build was carried out at home, Taka opted to commission West Jones Auto of Rancho Cucamonga to take care of the bodywork. It helped that the car as-bought was bodily straight and true, so it wasn’t a case of months of agonising welding to get it all as Datsun intended; with the shell perfected, it was all shot in a shade of Yellow Pearl pinched from the Honda NSX catalogue, while the details were picked out in House of Kolor Galaxy Grey: the airdam, taillight panel, BRE rear spoiler and Marugen Shoukai ZG-spec arch flares all wear the sparkly grey, and they’re beautifully offset by the chromed Euro-spec bumpers. In addition to the colour-coded centres of the staggered Star Road Glow Star wheels (which, incidentally, measure an incredible 10-inches wide at the back), it all adds up to a heart-meltingly splendid colour scheme. 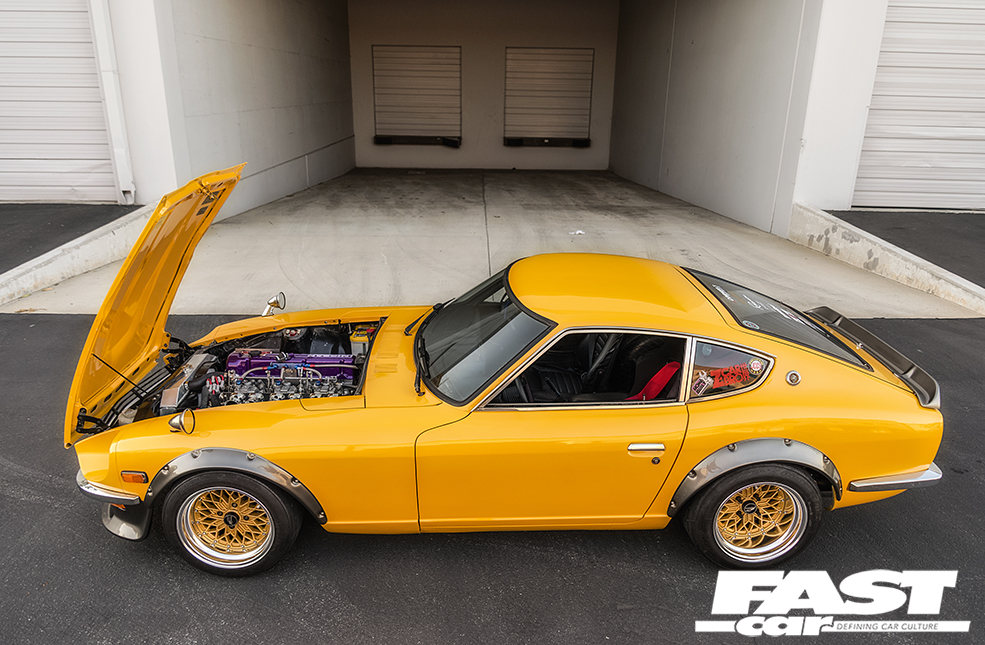 The interior is equally alluring in its retro 1970s magnificence. The S30 came from the factory with an ineffably cool dashboard, with perky eyebrows framing the dials, and Taka’s stuffed the orifices with Autometer Sport-Comp gauges to contemporise the readouts. The driver’s seat is a tasteful bucket with a 5-point harness, neatly framing the retro-modern Renown steering wheel, while the passenger seat is simply the OEM item, artfully retrimmed. Everything fit for purpose, and all in-keeping with the show-and-go vibe.

“I guess the fabrication of suspension components and the carburettor tuning were the most challenging parts for me, since I didn’t know anything about welding and I’d never touched a carburetted engine before in my life,” he says. “It was one of the hardest projects I’d ever embarked upon, as I really didn’t know anything about Z-cars. And rebuilding a car that’s over forty years old took a lot of research!” 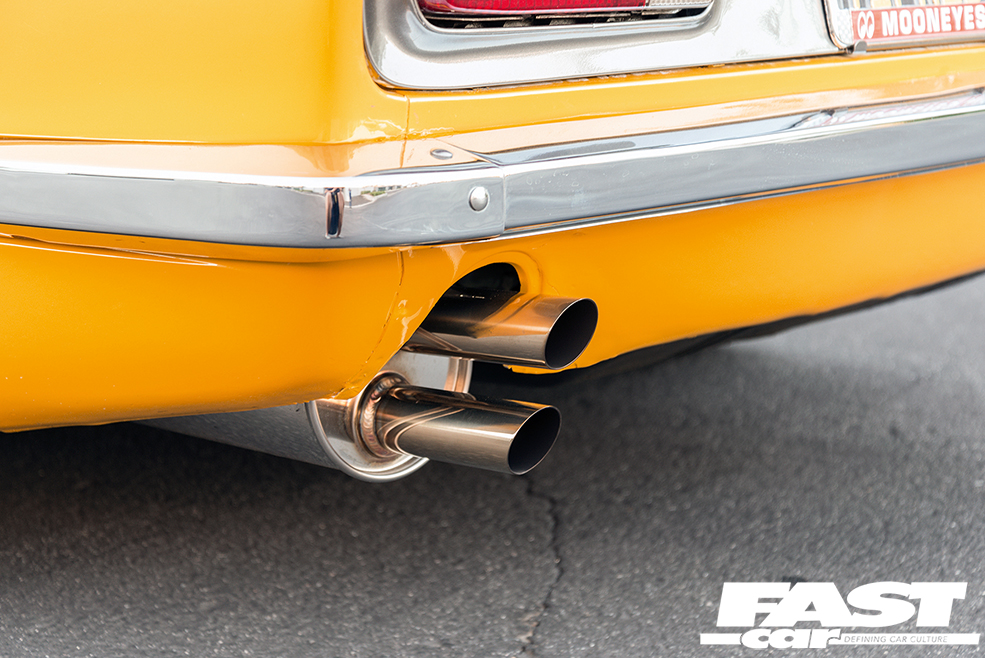 That research certainly paid off, as what he’s created here is a true polymath. It drops jaws and wins trophies (and hearts) on the showground, but it’s no trailer queen. Whenever possible, that L28 straight-six gets the life thrashed from it on track, howling through its shotgun tails, the poised chassis shimmering balletically through the curves. And it’s all down to Taka’s attitude – who says you can’t have it all? Show-and-shine, track day; concours, sprint… if you build it properly, there’s no need to choose.