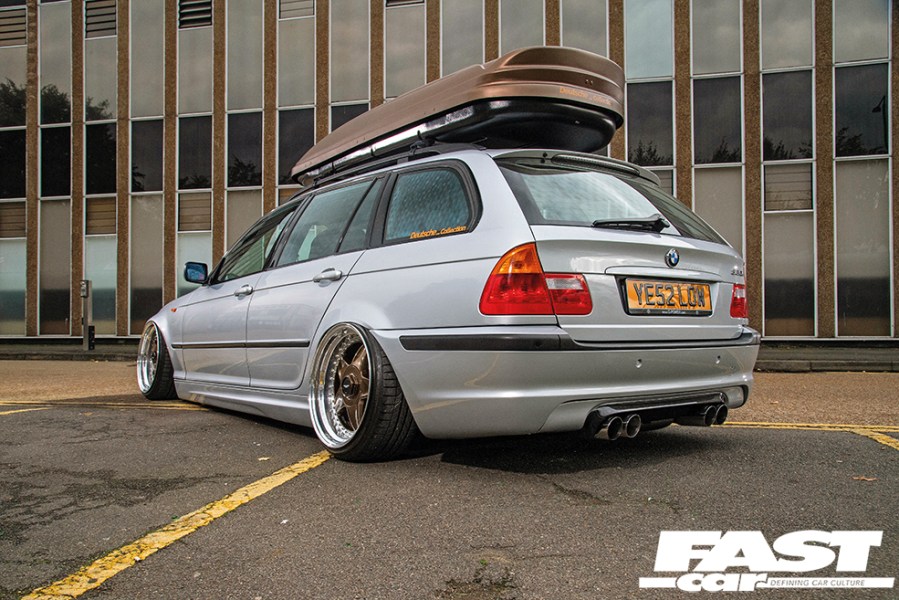 Fusing the disparate styles of the E46 M3 and Aston Martin DB7, Sav Kannides’ supercharged 330i Touring is a big-power sleeper with a dreamy spec.

‘Sleeper’ can be a relative term. In some cases, a street sleeper might be a car that looks entirely standard and unassuming but hides a bewildering and entirely unexpected stable of horses within. In others, it can be a car that simply focuses more on power than aesthetics, and from thence the surprise arises. It’s a subjective area with a lot of wiggle room. And Sav Kannides’ supercharged E46 330i Touring can be found somewhere toward the ‘surprise’ end of the scale.

Sav (@deutsche_collection) is one of those kinds of guys who’s always happiest with a spanner in his hand and oil on his shirt, endlessly seeking out offbeat ideas and solutions. And as you can see from the shoot, this BMW is an exercise in subtlety, in relative terms at least; sure, folks like us will immediately spot the aired-out stance, the stellar split-rims, the M3 exhaust outlets… but to the casual bystander on the street, it’s just some old estate car. 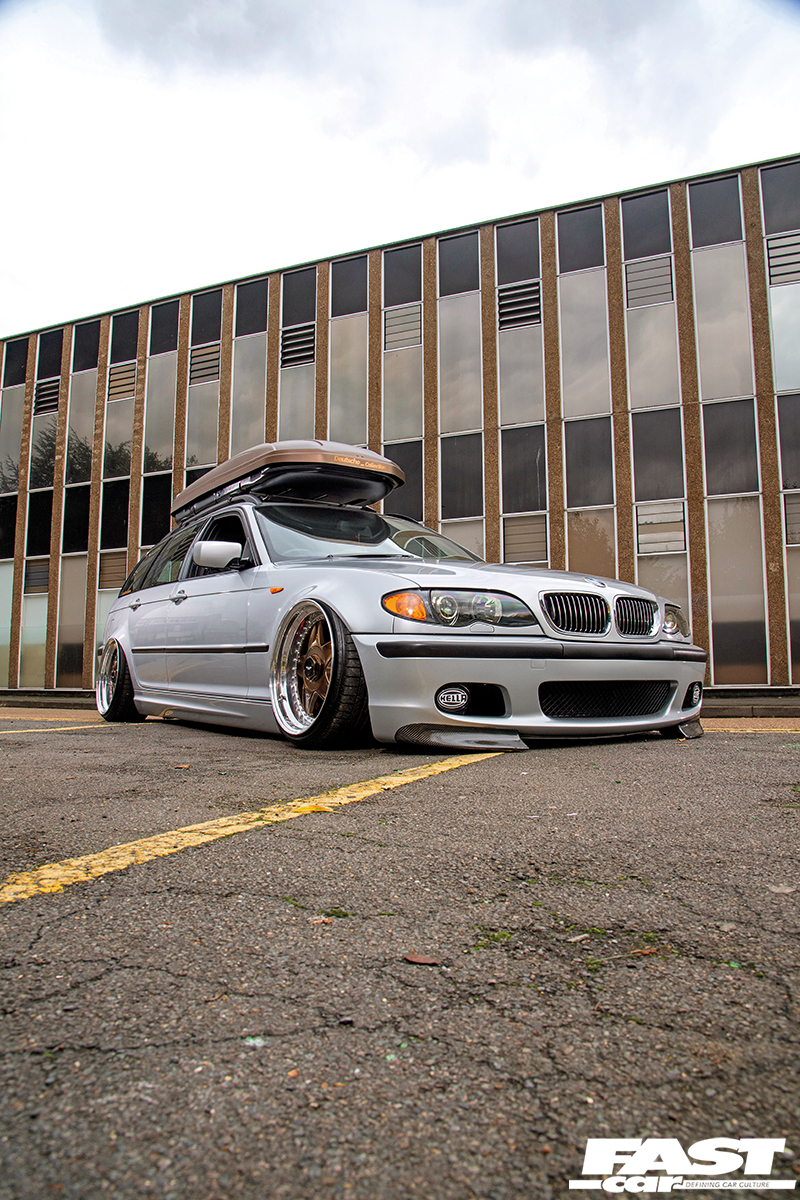 It wears its original shade of paint, it’s got a roof-box for that practical-family-man-on-holiday vibe… but wait, what’s that behind the front wheels? Does it really say Aston Martin on those calipers? And when you peep through the window, there’s an Aston Martin steering wheel in there too. A particularly clued-up aficionado may spot that the Speedline wheels were original Aston Martin equipment. What manner of thing has happened here?

Quite simply, Sav is living out the dadlife dream. He’s got the perfect family car – safe, practical, reliable, spacious – while at the same time turning it into a supercar. This is probably the only E46 in existence with a carbon fibre DB7 steering wheel, and those sodding great brakes are there for a reason: you see, what really characterises supercars above all else is that they’re really rather powerful. And so, as we’re soon to learn, is this ever-surprising estate car. 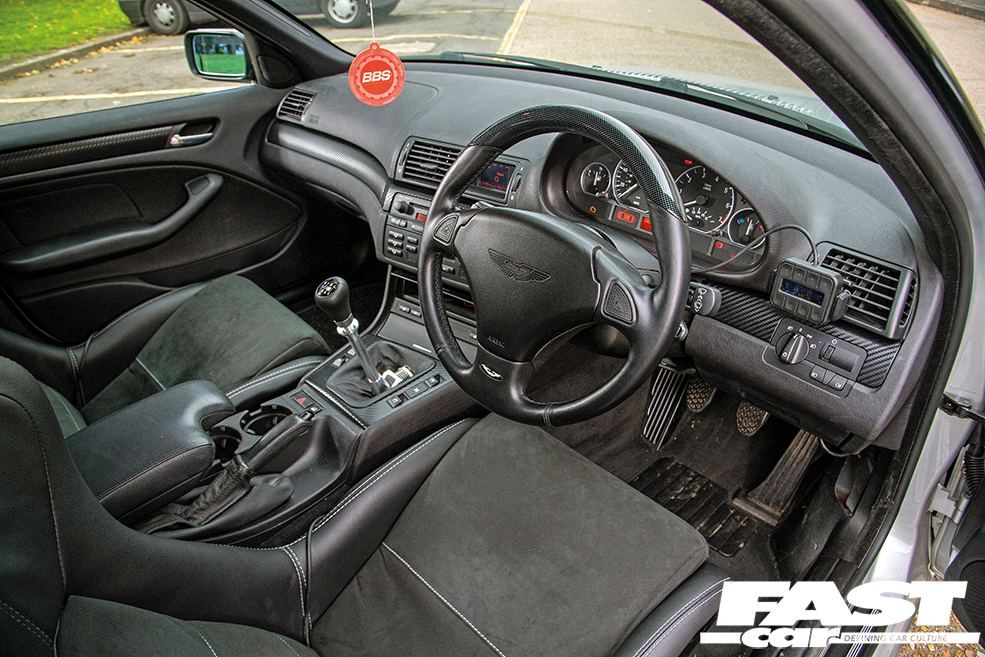 “I’ve modified every car I’ve owned – and I still own them all!” he says. “I’ve never sold a car. My first was a VW Scirocco Storm, which had the usual wheels, suspension and exhaust plus a respray in purple, and that’s now sitting in the garage. I’ll get around to restoring it one day.”

Sav’s petrolhead proclivities are sufficiently strong that he studied Automotive Engineering Design at uni, and as such, he’s very hands-on with modifying his cars, doing as much as he can on them himself. Following the Scirocco came a Mk3 Golf VR6, which rapidly morphed into a 3.1-litre with an ABT kit, and, as the shell rusted away, he transplanted the motor into his Corrado (carrying out the swap on his parents’ driveway). The sensible family car today is a Mercedes-Benz CLS 63 AMG Shooting Brake, remapped to about 600hp because ‘sensible’ is a spectrum. So, with one practical station wagon on the driveway, why get another one? 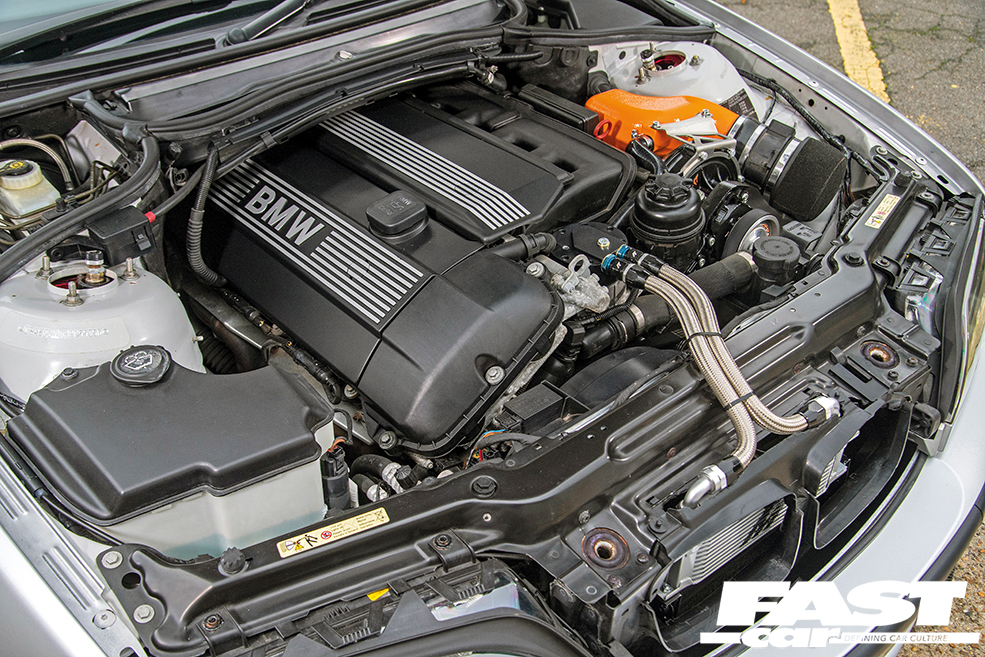 “I’ve just always wanted a BMW,” he enthuses. “They were too expensive when I was growing up, and the E36 M3 was the one I always dreamed of. My brother also had an E30 325i which was awesome – RWD cars were really something to aspire to after VWs. Why did I go for this E46? Well, I always liked the Touring shape, there’s something appealing about a fast estate car. There are loads of potential, too, seeing as BMW never made an M3 estate, and the M54B30 is a peach of an engine. I wanted to do my own take on the Touring.”

He knew exactly what he wanted as well. Sav spent six months searching for the right E46, as it absolutely had to be a facelift 330i with a manual gearbox, non-sunroof, in Sport spec with the Alcantara trim and Xenon lights. And in time, his diligence was rewarded, the right car popping up with a dealer a four-hour round-trip away from home. 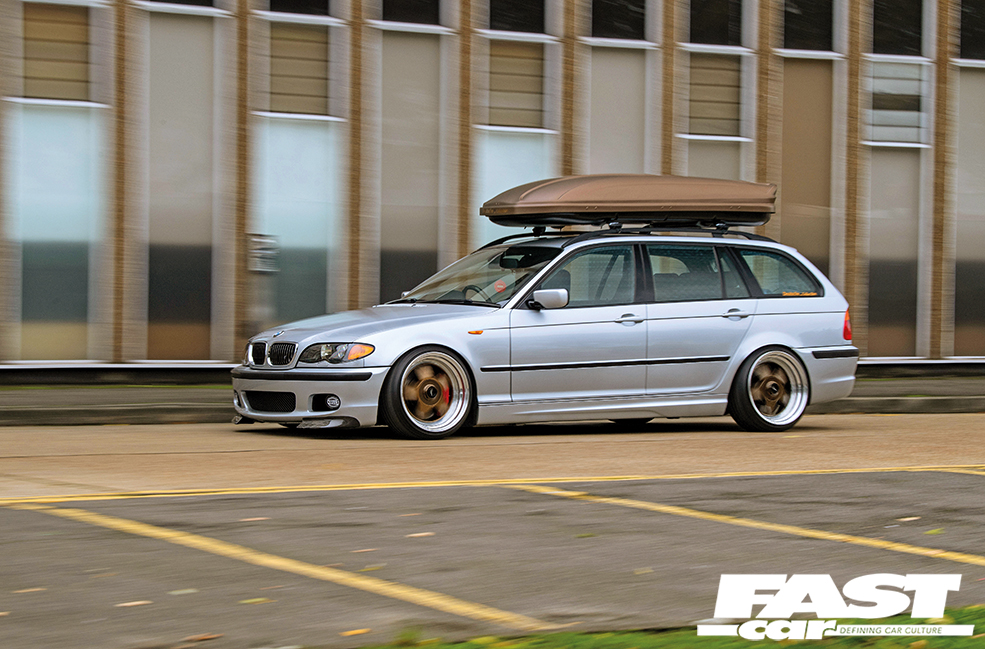 “It wasn’t as good as it looked in the pictures,” he laughs. “The mileage was 80k, low for the year, but it had rusted arches and a dent in the rear quarter… it was a good car though, just needed TLC. Perfect for me! And yes, there was a plan right from the start: I wanted to do a stanced look, with the horsepower to back it up.”

Setting about fixing up the bodywork straight away, the first mod was to fit the air-ride – an Air Lift Performance setup acquired second-hand from a fella on a BMW forum who’d had it on his M3. Sav fitted this on his brother’s driveway over the week, and the next step was to upgrade the wheels. He’d envisioned a set of concave BBS RCs from the outset, and these were duly sourced from eBay via Germany… although it wasn’t long before they were ousted by the three-piece Speedline Mistral split-rims you see here, which were originally fitted to a DB7.

“Split-rims were a must for the look I wanted,” he assures us. “And from then on, the mods were a slippery slope.” Coming next in rapid succession were the Cobra Nogaro bucket seats, an interior retrim in black leather and Alcantara with custom M stripes, an RTD gear shifter, and the impressive Awron gauge, followed by the exhaust. This is a Scorpion item for an M3 at the rear, with the distinctive quad tails, mated to a custom catless manifold-back system. All fun and games, as the spare wheel well had to be cut out and replaced with a coupé floor to accommodate the M3 rear box, the work carried out by The South London Garage. And then, with the pieces all slotting into place, it was time to address the issue of power.

“I specifically wanted reliable power with this, and forced induction was the only way to go – supercharging made sense to me,” he says. “I went for the G-Power kit as it was the only TÜV-approved ’charger I could find. The quality of their kit was amazing. Not the most powerful out of the box, but that could easily be improved! I installed the supercharger over the course of a month or so, mainly during weekends, while translating the instructions from German to English with the help of Google. I also stripped it and painted it black for a more OEM+ look but kept the signature orange G-Power intake pipe.” 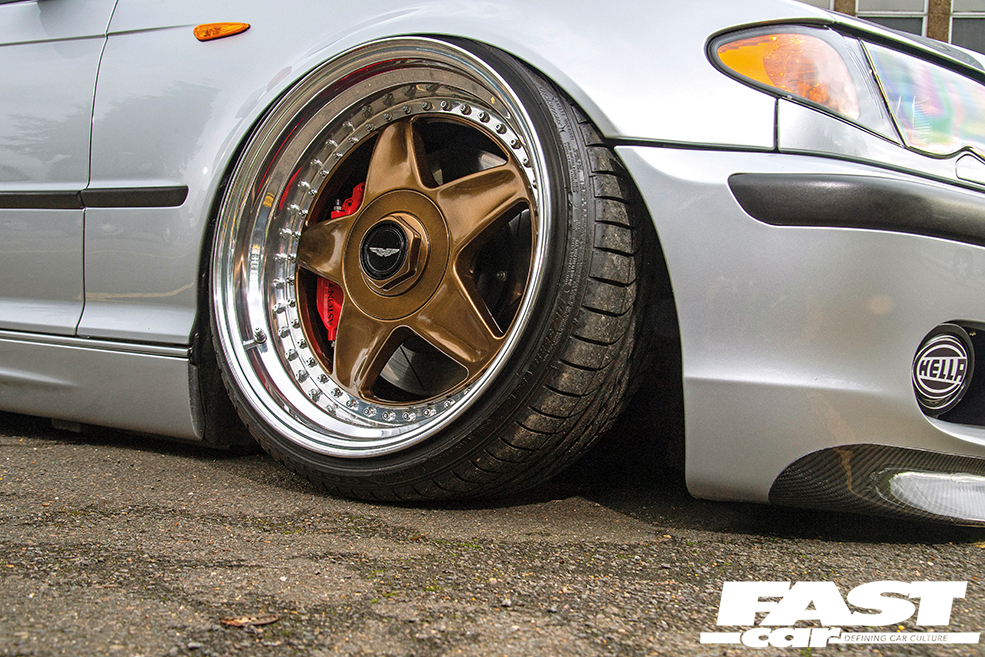 With that keen eye on reliability, Sav fitted a Mishimoto external oil cooler to keep the temperatures down when pushing it for long periods, as the blower uses the oil feed from the motor, and he had a custom map made up for the car. G-Power’s stock map is very conservative and he knew there was more to give, so with some custom mapping plus a boost increase and a bespoke pulley, the rolling road showed a solid 380hp. “I had a C55 AMG, and this has a similar feel of having a V8 under the bonnet with none of the on/off power band you typically get with forced induction,” he says. “The power is just so usable and reliable, which is exactly what I wanted.”

All of this simmering potency is encased within subtle environs, as Sav was keen to pursue a crisp OEM+ aesthetic. The original paint has been corrected and light lenses replaced (keeping ambers for the old-school), and there’s a sprinkling of carbon fibre at either end – a CSL diffuser at the rear and corner splitters up front. The arches have been subtly rolled and flared to accommodate the rims in their stanced setup, and there’s intelligent engineering behind this. In addition to the Air Lift hardware and a full set of new OEM-spec bushes throughout, Sav has added adjustable camber arms to get it all tucked in. And of course, there are the wheels themselves, neatly complementing the Aston Martin four-pots with Newport Pagnell panache. “The DB7 Speedlines were built to custom specs,” says Sav. “I originally built them myself with silver centres, although the offset was a little too aggressive and stuck out too far. Then I gave them to Dan at Wheel Unique, who did some machining to the back pad to give a better ET and re-did them in bronze powder coat, which I think looks fantastic.” 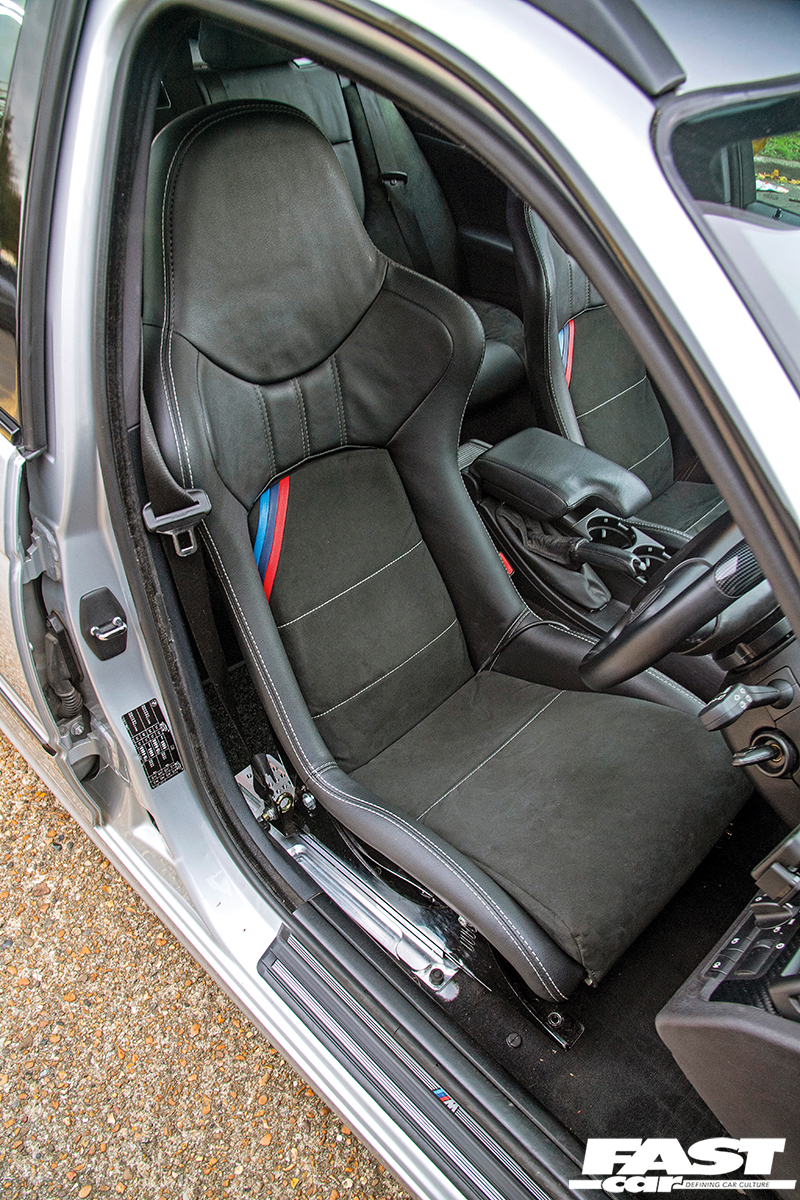 Yep, we’d have to agree. The Aston Martin theme fuses beautifully with the M3-inspired touches, and, of course, the sole element that makes its presence felt more than anything else on this build is that sublime supercharger conversion. “That’s my favourite part of the car, it’s made the biggest difference to the driving experience,” he beams. “The torque is fantastic, it really pulls. Plus the fact that I did it myself, and the sense of satisfaction after I installed it was immense.”

It’s taken Sav around two years all-in to get the supercharged E46 330i Touring to this point, and for the first time ever with a modified project, he feels that he’s got to a stage where it’s finished. There are always ideas swirling about, but for now, he’s happy simply to drive it and enjoy the dream-come-true glow. Besides, he’s got a Scirocco to restore. This fresh sleeper can keep on surprising people. Sav’s vision is complete. 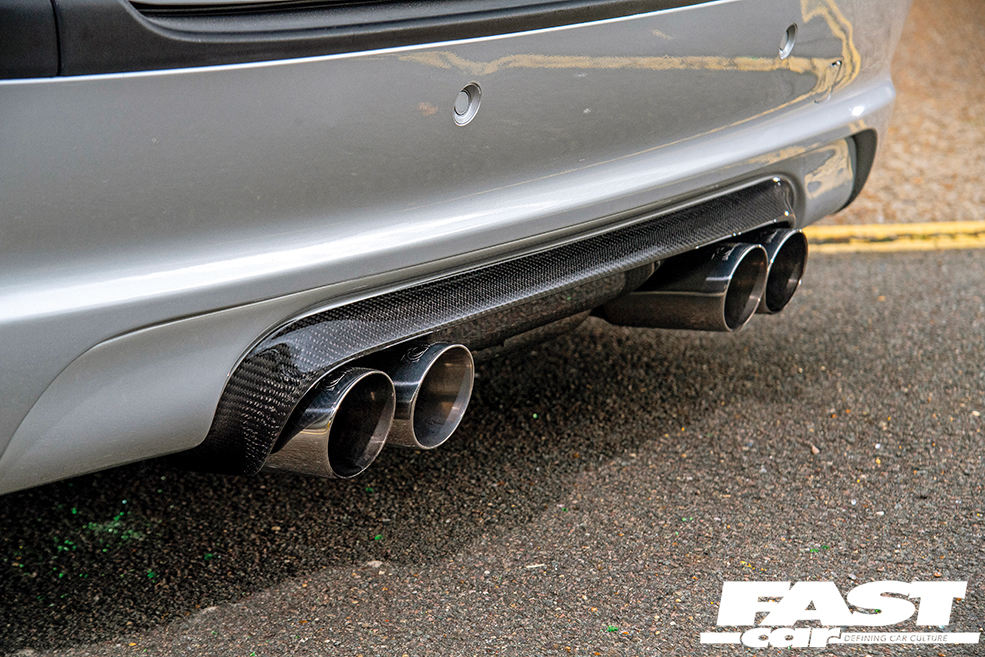