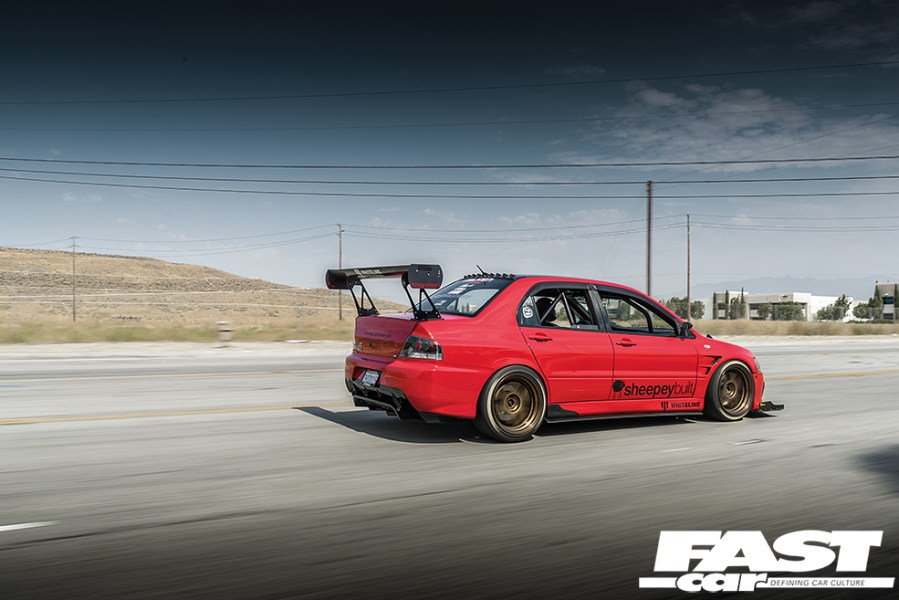 Sergio Miranda’s Evo IX is running big power at the wheels, has a chassis that won’t quit, and a unique body with a show-winning shine. But this is neither race car nor show pony – it’s his daily driver…

Evolution is an interesting thing. Kangaroos have strong tails which they can lean back on to make them really good at kick-boxing. Humans have strong and versatile opposable thumbs to allow them to excel at Instagram and Gran Turismo. Chameleons can blend into their surroundings pretty cunningly, as can stick insects, by looking like other things. Trees can, on a chemical level, talk to each other to communicate information about spreading tree diseases. It really is astounding how the natural world teaches itself to constantly adapt and perpetuate by remaining fit for purpose.

Naturally, some things will always refuse to evolve – stromatolites, platypuses… and, of course, if you’re a religious type then the whole idea can fly in the face of your entire belief system. But hey, we’re a modified car mag, we’re not interested in getting involved in all that. The salient point is this: the theory of evolution, and all of the many natural splendours therein, has clearly and tangibly informed Mitsubishi’s own Evolution series. Ever since the firm first saw fit to shoehorn the engine and drivetrain from a Galant VR-4 into a Lancer bodyshell back in 1992, the levels of madness have been incrementally escalating to a sort of fever pitch… and that’s just the factory cars. Sure, Mitsubishi themselves honed and refined these cars for an impressive ten-generation span, but for the eager modifiers out there in the Jap scene heartland, these formidable machines were merely blank canvases. An astounding base upon which to build something phenomenal; helping them to evolve further, a sort of evolution-squared. This is probably the sort of car that Charles Darwin would have driven.

The ‘90s power wars between Subaru and Mitsubishi helped to cement a modern era of inviting the accountants into the workshop as ever-more juicy powerplants and fiendishly clever drivetrains were stuffed into sensible four-door family saloons. The lines were blurring between selling performance models to act as a halo for the brand, and making the high-performance variants the mainstream sales models in their own right. The public lapped it up, of course, as ten generations of Evos has proven – people love to champion a hero, and the rivalry between these two rally giants became a badge of honour for any true fan.

It’s safe to say that Evo enthusiasts generally have a favourite version. Some prefer the purity of the bare-bones Evolution (retrospectively dubbed ‘Evo I’); others love the boisterous colours and titanium-bladed turbo of a Mäkinen Edition Evo VI, while some revel in the shrieking lunacy of the Evo X FQ-400 (and we all know what ‘FQ’ stands for, right?). But for many, the Evo IX is the ultimate platform: the last of the traditionally-styled Evos before the Evo X arrived, looking like Predator and frightening the children. And while Mitsubishi’s attention to mechanical detail bordered on the obsessive with the Evo IX, it was ultimately in the same category as any other road car: a base for tweaking – brimming with potential, but necessarily softened for day-to-day use and warranty compliance. Lots of scope for improvement, then! And as this particular IX proves, it’s easy to get a bit carried away…

This shiny red brute belongs to Sergio Miranda, an insatiable tuner who had been more interested in tweaking Honda Civics, before the lightbulb of illumination pinged above his head and he decided to go AWD in something with a little rally pedigree. Working in tandem with his older brother Luis, the dream-team had previously spannered together a turbo EG so the notion of forced induction wasn’t at all alien to them, and the balls-to-the-wall nature of the Civic had earned them a lot of friends within the aftermarket and tuning industry – so the scene was set for these combined passions to level-up to something extraordinary.

At this particular moment in time, a perfect project base serendipitously presented itself in the form of a tidy and almost-stock 2006 Evo IX – although it has to be said that Sergio wasn’t champing at the bit to get elbows-deep into the project right away. Given the heightened levels of chassis sophistication and readily deployable power compared to what he was used to, he was happy to daily-drive the thing about for a couple of years just as it was. Of course, hardcore modifiers can’t be sensible forever, so inevitably it was only a matter of time before the Snap-On chest started calling to Sergio, siren-like, to come back to the garage.

And so that’s exactly where he went, cracking out the tools and setting about the Evo with ninja force. Job one was to upgrade to a top-mount turbo, complemented by a full carbon fibre front end, a towering rear spoiler and a tasty set of Volk TE37s. It was still his daily, but he saw fit to install a rollcage as it fitted neatly with the increasingly aggressive nature of the build.

Now, the thing about evolution is that it’s relentless. Nature never sleeps. So obviously it wouldn’t be the case that Sergio would bolt a bunch of bits to his Mitsubishi and leave it at that; this Evolution needed to evolve. So the more he changed, the more he felt the need to change, the spec sheet blossoming into something near-unrecognisable.

The big news is happening under the bonnet. Thanks to all those contacts made in his Honda days, Sergio knew just the right contacts to work with in making his Evo’s 4G63 all the more shouty. Alexander Soto at Sheepey Built was a key figure, working with Sergio’s dreams and requirements to plan out a pioneering top-mount, forward-facing manifold with the exhaust and wastegate screamer exiting through the bonnet, along with the vast front-mount intercooler and all its hugely impressive bespoke titanium piping. Titanium became something of a feature in fact, with the lightweight metal being employed for the cam cover, the dress-up bolts, all sorts. It’s a formidable engine in terms of grunt, but it’s also been built to look gorgeous. Mission accomplished, right? Sheepey Built then worked with Gonzo Motorsport to get down-and-dirty with the 4G63’s guts, installing Crower valve springs and retainers, GSC cams, and AEM cam gears; meanwhile, Sergio was busying himself rewiring the car while a buddy converted the 4-point ’cage to a full-fat 6-point.

It’s worth bearing in mind that this has always remained a streetable car, too – 518whp is a mighty and slightly silly figure, enough to go obscenely fast; yes, we’ve seen far more from the 4G63, but those massive-power builds are usually drag cars and far from daily-drivers. Sergio’s taken a methodical approach here to keep it all usable. The exemplary chassis setup helps a lot – Stance+ coilovers tie in with a full suite of Ultra Racing chassis braces and Whiteline anti-roll bars to ensure that while it’s all stiff and race-car precise, it’s also smooth and compliant when it needs to be. So he can give the opposition hell on track, or he can just cruise to the shops and pick up a drive-thru on the way home.

The body has also been gradually evolving in line with the mechanicals. When Sergio swapped to the all-carbon front end he sold off all the original bodywork that had been unbolted, but in order to keep the look fresh he decided to acquire and swap back in an OEM front bumper, complemented by a JDM-spec rear item, and you can’t miss the huge Kognition wing – in combination with the Varis diffuser and Voltex vortex generators it really does make the back end look pert and purposeful. The front wings are now Chargespeed carbon pieces, joining the Seibon carbon bonnet and Rexpeed carbon skirts in a carnival of black-weave cheer, and the paint’s been carefully colour-matched to the OEM Phoenix Red. Because while bare carbon is cool, lightly painted carbon has more of an F40 vibe.

With an interior carefully upgraded with a Buddy Club P1 seat and a MOMO Monte Carlo wheel, along with all the gauges he needs to keep an eye on that vibrant motor, there’s more than a hint of racer purposefulness in here – but, once again, it’s important to remember how Sergio uses this car. Sure, it’s got the horsepower and the chassis to be pretty devastating on track, and the sort of fit-and-finish with those well-chosen aesthetic upgrades to ensure that he’s winning trophy after trophy at the show-and-shines… but he drives it everywhere. This is no trailer queen or pampered garage showpiece, this is Sergio’s everyday car. And that’s perhaps the clearest manifestation of evolution in action – it’s changed and developed this way because that’s the way it works. Let nature run its course, and perhaps all Evo IXs should end up this way. That’s evolution for you.