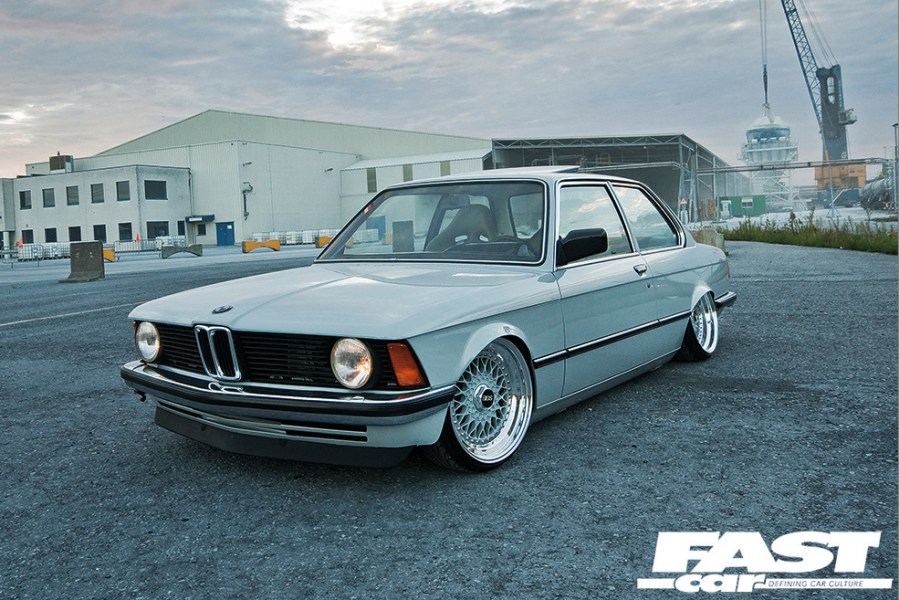 Welcome to this week’s FC Throwback, where we take a look back at some of our favourite previous feature cars. This week it’s Kevve Raekelboom’s sick BMW E21 316 from 2012…

It’s all very well searching the interweb for ideas but nothing beats getting up close to other modified metal to find inspiration. Fortunately, Kevve Raekelboom has the perfect job to do just that. He scours Europe and beyond to bring you some of the best cars on the planet through his lens so it’s no surprise that on his travels he found some damn fine motivation for his own project.

He told us: “I bought my BMW in October 2010 and went to the SEMA show only days later,” Kevve explains. “I came back with my head full of inspiration and just couldn’t wait to get started!”

The most immediate task was to rebuild the 1.8l engine. It may have been decades old but the block had only covered 80,000km so it was well worth saving. Kevve chose to keep it real with no crazy mods here, just a K&N filter and custom exhaust. After that, it was time for him to get creative, very much in a hands-on fashion.

The suspension alone took a whole three months to get right but this car is all about stance so it was time well spent. You don’t just buy air kits for 30-year-old BMWs ‘off the shelf’ so Kevve and friends had to figure out a way. In the end, it was an AccuAir system, custom created from an E30 base.

But that was only part of it – as the chassis had to be notched, arches pulled and wheels carefully chosen to ensure the E21 could hit the deck when that magic button was pressed.

There was, however, one further obstacle: “The fuel tank had to be relocated to the boot as it was the lowest point of the car and scraping fuel tanks is not so cool,” Kevve laughs.

Getting the interior right on a retro ride is one of the hardest areas of modifying. It’s difficult to find the correct balance of new bits while retaining the ‘old skool’ feel.

But Kevve has excelled here too, combining the modern Bride perches and carbon dash with a stunning cabin retrim in a period green colour. It’s absolute perfection and for anyone with a retro project, this is a lesson!

While much has gone on inside and underneath, Kevve recognised that the bodywork was a case of less being more. Once the rear panel was smoothed and the window wipers removed, nothing else was required – other than adding carbon mirrors and handles then coating it all in a lush grey.

The polished BBS splits were then colour-coded to suit and our Kev was ready to roll in one of the finest retro rides we’ve ever seen. The boy has shown he can take bloody good photos and now he’s proved he can also build a mighty fine project car.

Thanks
My mates from our club, Concept 983; Kean Suspensions for the air ride install; Deca for the upholstery; Dieter for all the help; Girlfriend Ellen for all the help in the winter rebuild and keeping me warm in the garage!