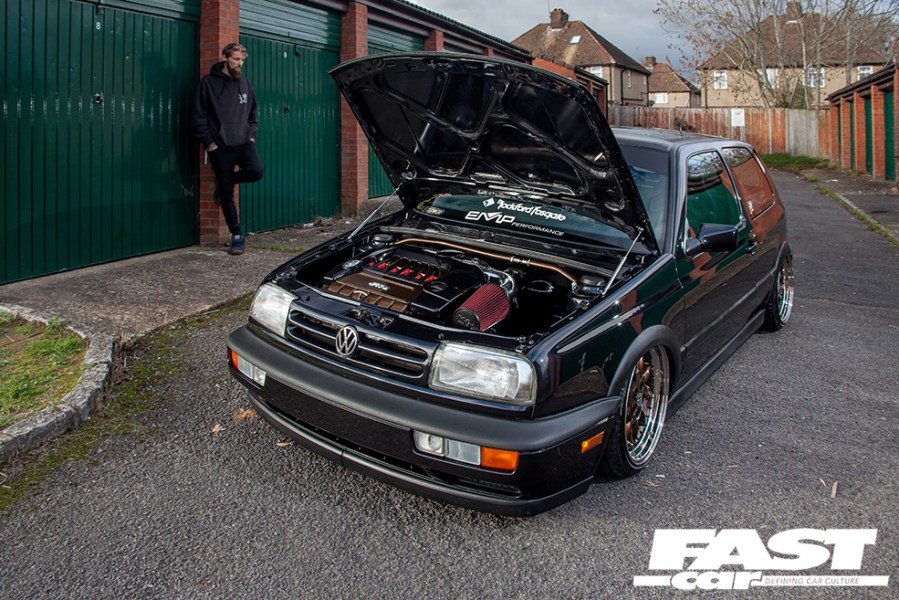 With a silky-smooth R32 engine swap and some sweet detailing, this Mk3 Golf is making all the right noises…

Ever since car enthusiasts first started tinkering with their rides, the prospect of dropping a big engine in a small ride has always appealed. Rather than faff around trying to squeeze more power from the existing set-up, it’s often easier – and cheaper – to fit something with more grunt as standard. Even manufacturers have recognised the potential, with Renault bunging a V6 in the back of a humble Clio to create one of the maddest hot hatches of all time. For Keil Critten, owner of this stunning Mk3 Golf, he knew right from the off it had to be V6 power. “I’ve always liked the sound of the R32 engine, so when I started my Mk3 project, that was what I wanted,” he explains.

Having already built a multi-show winning Polo, he knew what needed to be done to create a cool car, but this time it would have more power. It would also be done by himself on the driveway of his house (with help from girlfriend Katie’s dad, Phil). “The garage can only just fit the car in, so the only way to work on it, was to roll it out onto the drive,” he says. “We put up a gazebo in the winter so we could continue working on it, but even so, it was hard going sometimes!”

Fortunately, his girlfriend Katie and her parents were on hand to keep him going with cups of coffee and Hobnobs – essential modifying sustenance. “I turned their house into a bit of a parts store,” Laughs lorry driver Keil, “there were parts all over the place because there’s barely enough room for the car in the garage, let alone anything else.”

Pop the bonnet and the wheezy 2.0-litre GTI engine has been replaced by a big lump of V6 goodness. Taken from a Mk5 Golf R32, the 3.2-litre six-cylinder sits very neatly in the bay. “I wanted to get it as tidy as possible, so relocated the battery, deleted the washer bottle, expansion tank and did a wire tuck,” says Keil. A lot of fabrication and smoothing went into the bay to leave the R32 engine and large, hard-piped K&N induction kit as the centrepiece. It’s more than just a great looking engine though.

With a solid 247bhp and 320Nm of torque from the factory, it generates decent performance too. Keil has further enhanced it with a custom exhaust system with OEM tips from the crew at EMP Performance. Dave and the crew know a thing or two about making an engine sound good (he built one of the UK’s finest R32s – an ex-FC feature car no less) and this V6 is no exception. There’s a deep rumble on startup followed by a sonorous howl when you floor it. An R32 with a full system has to be one of the best noises you’ll ever hear. Hooked up to a VR6 gearbox it also provides plenty of shove – not that this car is driven everywhere flat-out, of course; it spends a lot of time aired-out at shows, so people can check out the rather epic styling.

When it came to the air ride installation, Keil figured this was one area where it was best to leave it to the experts and sent the Golf off to Car Audio Security. “It was quite funny, because when I arrived, it was at the start of the project and the car was looking a proper state with rust and all sorts,” laughs Keil. “Parm and Jay actually asked me if I was serious about having the work done, as the car looked like it wasn’t worth the investment.” But he could see through the bad bits and knew the Golf had real potential.

After he’d persuaded the guys at CAS that he was serious, they set about fitting the Air Lift Performance V2 kit. Once the lines had all been routed and the air was fully hooked-up, Keil got stuck into making the rest of it look good.

This began with a serious amount of restoration to treat the tin worm and other issues that this tired Golf had accumulated over the years. “My mate Dean helped with the welding and lots of advice,” says Keil, which was essential to get the smoothed engine bay that he craved, before adding some tasty additions to the styling.

The boxy three-door shell has been lovingly enhanced, but it retains that OEM+ feel. Up front a Vento front end has been fitted, together with a Phase 2 grille. A US-spec bumper with side indicators and splitter completes this fresh front end. At the rear, a US-spec tailgate was fitted, along with red Hella lights. The whole shebang was then treated to several coats of chocolatey BMW Marakesh brown paint. Yum.

With a plethora of different wheels available for the Mk3, Keil decided to go his own way and the end result is both highly innovative and stunning.

“I wanted something to tie in with it being a GTI, so built my own split rims using original GTI wheels,” he explains. The alloys were taken apart and rebuilt with 2 and 2.5in Radinox dishes with 6-inch barrels and spiked bolts, before the centres were painted BMW Marakesh brown to match the Golf’s exterior. Sat tucked up tight in the GTI arches, they look superb and you’re unlikely to see another set.

Keen to stick with the GTI theme, Keil really went to town on the interior. “I got hold of some seats from a Corsa VXR and then ordered some Golf Mk7 GTD tartan cloth,” he says. The iconic fabric was then sent to Lawanda at LG Trimming, who used it to cover the centres of the Recaro seats, as well as the rear bench and the door cards. With contrasting copper stitching they look superb – it’s a cracking job.

A self-confessed carbon nut, Keil has added the black weave all over the cabin. “I did it all myself,” he explains, it wasn’t easy – especially that custom surround for the doubleDIN headunit.” The rest of the inside has been smothered in Alcantara, including the dash, door cards – even the 280mm MOMO wheel. It really does look special in here.

Having gone to the trouble of fitting a custom housing for the doubleDIN headunit, it seemed a shame not to add some serious audio upgrades to go with it. Custom door builds were fabricated to house component speakers, while the boot features a recessed sub as the centrepiece of the build.

Considering this was once a very sorry looking 2.0 GTI, the transformation is immense. Keil has looked at every area and given it a refresh, with a nod to the car’s original roots. It’s no wonder that it’s already bagged a heap silverware at various shows and looks set to continue the trend as the 2019 season gets into full swing. It’s a true homebuilt hero with real six-appeal.

Thanks
My girlfriend, Katie Collins, for allowing parts everywhere and supplying coffee, her dad, Phil Collins, for all the late nights lying under the car getting everything shorted, the Car Audio Security boys (Amal, Jay, Parm) for non-stop help and support, EMP Performance for the exhaust, Dean Lapham for welding, parts finding and technical knowledge, Lawanda at LG Trimming for the retrim and James Batty at Auto Finesse