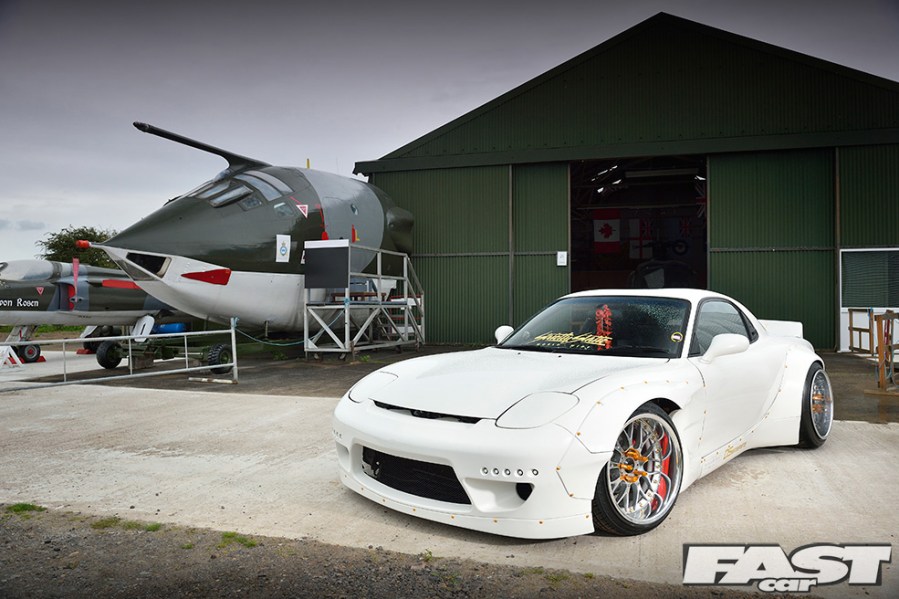 You know what those annoying philosophical people like to say: ‘fail to prepare; prepare to fail’. But as irritating as it sounds, it’s an ethos that certainly seems to work, and rings particularly true in our owner Sean’s line of work here – a man who’s tasked with signing off seriously important blueprints for Jaguar and Land Rover’s very latest models.

With so much thought going into his job, you probably won’t be surprised to hear that Sean’s work philosophy was directly transferred over to his latest project car when it was time to put it under the knife for a bit of bodywork recently. And as the end result is so damn stunning, we think you’ll agree this time at least, it was worth all of that gruelling groundwork…

This stonking RX-7 isn’t Sean’s first foray into rotary fun either, as we discovered when he explained his car history to us: “I’ve had cars ranging from a Mk2 Golf through to a Fiat Grande Punto,” he delves into his previous four-wheeled antics. “Then I picked up an RX-8 when I was just 22, which I still have to this day! It’s now got a welded diff and stripped interior and is used for drift days…”

Falling in love with the Wankel’s unique noise and smooth power delivery through this futuristic looking beast, it was only a matter of time before Sean began delving deeper into the rotary back-catalogue for something arguably even more impressive.

“I picked up the RX-7 in early 2016,” Sean continues the tale. With a freshly rebuilt twin-turbo motor in the tidy bay up front, along with notably clean bodywork for its age, he was able to see through this fresh import’s questionable body kit to a car that was clearly extremely well looked after back in the land of the rising sun.

“I knew I’d be freshening up the bodywork in some way anyway, so it wasn’t really an issue,” he explains, quick to put a deposit down on the car he’d been dreaming about since the days of Need for Speed Underground 2.

Although always intended to be a long-term project, Sean admits he didn’t plan to go too extreme after taking collection of his tasty coupé. “I began looking at the likes of BN Sports body kits straight away, and never thought I’d be able to pull off a Rocket Bunny project myself,” he admits, initially thinking getting his hands on and fitting one of these super-rare, bang-on-trend JDM wide-body packages was going to be more hassle than it was worth.

He added: “But then my friend Tobi told me he had a link to someone who could supply me with a kit, and the Rocket Bunny seed was planted in my head…”

Things moved quickly once the first steps were taken, meaning the multi-piece kit was laid out in his back garden just a few weeks later, with Sean super-excited about the next chapter with his steed. “I didn’t trust myself to cut and tub the arches,” Sean admits.

“Luckily, I’d been recommended going to Tom at Lukatar Power in Rushden through the drift community.” Sure enough, Tom performed a stellar job of getting the wide arches, front bumper, rear diffuser and ducktail spoiler riveted onto the car with military levels of perfection, before a lick of white paint was slapped onto the new-found curves, leaving Sean with a drop-dead gorgeous body on his hands.

You know what comes after adding an extra four-odd inches of girth to each corner of your sports car? Finding some suitably wide wheels to fill out the arches, that’s what! Wanting something a little out of the ordinary, Sean managed to snap up some suitably JDM Weds Kranze ERMs with their tasty Y-spoked faces.

Problem was, they were nowhere near wide enough for his newly-built monster. “They were perfect for splitting and re-lipping, though” he explains. “I used my experience from my career as a metrologist to get the perfect wheel specs to the very last millimetre…” Using his highly sought-after skillset of being able to identify the exact sizes parts need to be to work, he soon came up with the winning formula for his RX…

“I worked out the rears would need to be 14.5 inches wide!” He laughs. “I doubted myself a little, because with my negative offset that would work out at over eight inches of lip at the rear…”

Eventually convincing himself these frankly insane specs were indeed right, the hunt began to find someone who had enough polished alloy on-hand to create these huge barrels. Eventually, VR Wheels in the States came up trumps, and the rims were put back together with suitably tasty gold M8 hardware to create some of the most incredible, physics-defying rimmage we’ve seen in a very long time – just look at them!

It was becoming clear that Sean was onto a winner at this stage. He just needed a way of getting the car to sit a bit squatter over the new hoops. Problem was, the majority of his allocated budget had already been busted on the premium body kit and wheels! Nothing a bit of imagination couldn’t sort out, though…

“I wound down the coilovers that came on the car, and tweaked the camber and toe to get it sitting nice and low… But it wasn’t low enough,” Sean painfully recalls. “I therefore drilled extra mounting holes 15mm higher up on the forks – an easy way of adding a little more drop!” Riding static (for now, at least), Sean’s saved on fitting a full-fat air suspension kit while breaking out of the mould in the process. Cool!

With over 300bhp now on tap thanks to a large street port and some trick breathing mods (which also leaves him with the all-important ‘brap’ soundtrack, too), Sean’s now got his hands on a rare slice of Wangan-stomping royalty which understandably amazes passers-by. “I’ve honestly never known a car to turn so many heads as this when I drive past!” he grins. “It’s easy to get a bit blasé about owning it, but when I see people’s reactions it reminds me I’ve created something pretty special here…” You got that right, mate!

By caricaturising all of the bits that make the standard car so fantastic, it’s not surprising Sean’s road weapon is breaking necks wherever it goes. Now hitting the show scene hard, it’s getting all the love it deserves. And it all boils down to a tonne of hard prep work. So remember kids: stay in school!

THANKS
Big thanks to Japwestmods for importing the car in the first place; DS Motorsport for their mechanical expertise; Pipercross UK for supplying me with new custom air filters; VR Wheels in the USA for manufacturing my custom 8.5″ rear dishes for my wheels; BLACKMARKET DRIVETRIBE for cutting my stickers and supplying me with awesome merchandise; and last but not least, big thank you to my wife Kichelle for her help, encouragement and good company when we’ve spent evenings together in the garage.