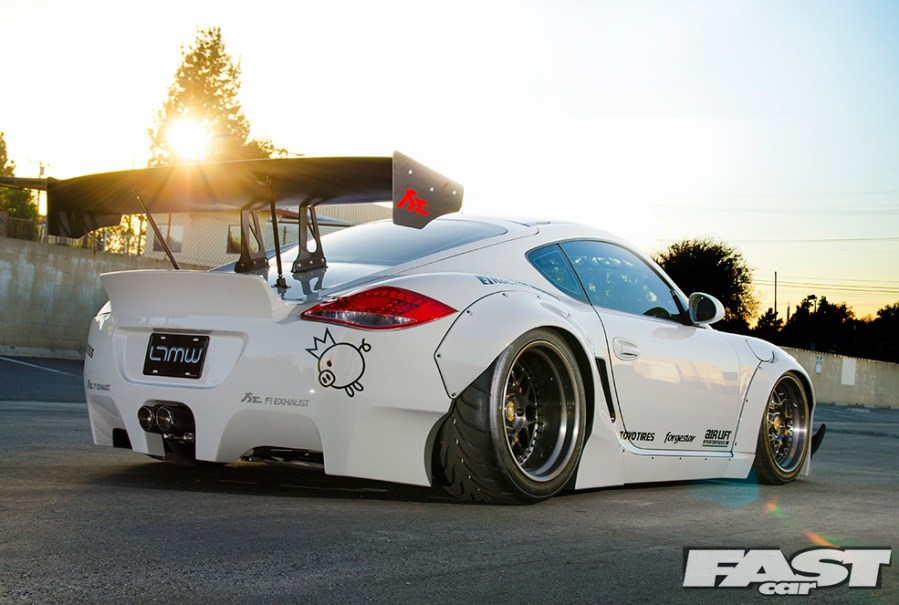 On paper, the Cayman is the smallest car in the Porsche range – but there’s nothing small about this modified Pandem Porsche Cayman. Just look how damn wide it is!

Some people like to pigeonhole themselves. They say ‘I’m a Ford guy’ or ‘I’m a VW girl’ and let that define their lives. That’s fine, of course; everyone has their own paths into car enthusiasm, their own unique reasons for making the decisions that they do, and you can’t deny the passion that’s tied up in single-marque affinity. Look at the fervent eagerness of the fans of Ferrari (the ‘Tifosi’) and Alfa Romeo (the ‘Alfisti’), or how strictly polarised Australia is between Ford and Holden, or even the Vauxhall groups on Facebook that’ll viciously chew you out if you suggest that anything other than a Griffin badge might be an option.

Some, however, are rather more open to alternatives. Andrew Ho freely admits that he’s usually a BMW guy, but the car you see before you resolutely isn’t a Beemer, is it?

“I actually bought this Porsche Cayman for my wife,” he explains. “It was an engagement gift. I previously had an E90 BMW with an M-Tech kit, riding on Enkei RPF1 wheels and KW V3s, and this Cayman was intended to be something nice for my wife-to-be to drive around LA. I bought it from a retired lawyer who was in a rush to leave the country! It only had 22k on the clock and it was a good deal. But my wife didn’t end up using the car much, partly because of the manual transmission and partly because of the Los Angeles traffic.”

It was at this point that ideas started to percolate through Andrew’s subconscious. Mischievous ideas. The experts always say that you should start any project with the best possible base, and he had a pristine little sports car just sitting there, waiting to be refreshed and revivified with a new persona. But which direction to take? A full-on race build, a stance project, some sort of powertrain upgrade? The options were wide open, and it was while Andrew was pondering all this that his good friend Long Tran came knocking on the door.

Now, some of you will know this name from myriad other mag features and show reports. Long is the mastermind behind revered tuning outfit LTMW, a garage with an improbably long string of iconic builds in their back catalogue. And the reason Long came to visit Andrew? Well, he knew that his buddy had a Cayman, and he also knew that Kei Miura of Rocket Bunny fame was developing a widebody Cayman kit under the Pandem sub-brand. “I couldn’t pass up on this project,” Andrew laughs. And so began the descent down the slippery slope.

The Cayman itself is an interesting proposition for a build. There are a lot of people out there who sideline it, calling it a ‘poor man’s Porsche’ simply because it isn’t a 911. These people are idiots who can safely be ignored. The truth of the matter is that it’s an entirely different kind of Porsche; while the bigger-brother 911 has been belligerently clinging on to the notion that hanging the entire engine way out behind the rear axle is a good idea since the 1960s (with, it has to be said, a surprising degree of success), the Cayman and its roofless Boxster sibling reframe the experience within modern parameters: the engine’s in the middle of the car, which arguably makes far more sense and makes the thing more balanced, and the car is also usefully smaller. Smaller means lighter.

Lighter means more agile. It’s a hell of a car, it really is; the flat, mid-engined layout gives it a very low centre of gravity and near-perfect weight distribution, the entire thing pivots around that peach of a motor, the steering is superbly precise, and the ride’s surprisingly compliant. Of course, you’re reading this magazine because you like modified cars, not standard sports cars, so you’ll be pleased to note that Boxsters and Caymans are prime modding fodder these days too, and Andrew – with the help of Long – was developing some pretty naughty plans.

“Long was able to negotiate sponsorship for the project from companies including FI Exhaust, Fabspeed Motorsport, StopTech Brakes, Recaro, Tarett Engineering, and Air Lift Suspension, as well as getting me a place on the Forgestar Wheels stand at SEMA,” says Andrew. There’s a lot of big names there, so there was clearly never any question of half-measures here, this was always going to be a massive build. Super high-profile.

And so, with the help of all these sponsors pulling together toward the SEMA goal, along with the proven expertise of LTMW, the spec list began to take shape. Piece by piece, the Cayman climbed up the ladder of awesome toward the fluffy clouds of victory. A set of KW shocks were mated with a custom air-ride setup courtesy of Air Lift, while the brakes were exponentially beefed up by StopTech BBKs at either end. Naturally it had to run Forgestar wheels, so a set of M14s were chosen in staggered widths – 10×18” up front, and a meaty 13×18” out back – all slathered in sticky Toyo R888s.

A lot of attention was paid to the interior, all centring around those racy Recaro Sportster CS seats that have been artfully trimmed in sumptuous leather, and of course there’s no point uprating the ‘show’ if you don’t also augment the ‘go’, so that 2.9-litre flat-six was treated to a Fabspeed manifold and full F1 Valvetronic exhaust system as well as an IPD plenum and 911 GT3 throttle body. The upshot of all that is a handy 292bhp and 235lb.ft, which will do nicely until Andrew’s aspirations for thrust accelerate to the next stage.

What really defines the build, however, are those outrageous aesthetics. The Pandem widebody kit pretty much jabs you in the eye with a wedge of lemon, doesn’t it? “The fun part was that the kit was designed for the earlier 987.1, while my car is a facelifted 987.2,” Andrew points out. “This meant that we had to do quite a lot of modifying and reworking, from altering the bumper fitment to extensively readjusting the suspension to work with the lines of the kit. We also had a hard time with the wheels, because they’re very wide and we still wanted to achieve full steering lock. But Long and his team were able to pull it all off, and the car was ready for SEMA as intended.”

It’s an impressive tale, taking a project that was never initially planned to be anything and then rapidly freefalling into a full-on show build, but in the aftermath of the show it was created for there was never any question of Andrew resting on his laurels, drawing a line under the endeavour and moving on. “After SEMA, it became my plan to build the Cayman that Porsche should have built,” he says. “Something more powerful, more capable, that Porsche would never be brave enough to build in case it overshadowed the 911. So I’m currently seeking a 911 GT3 engine to fit into my Cayman… I think this would complete my build.”

We’d suggest that ‘complete’ isn’t quite the word, as people like Andrew are never satisfied with saying a project is finished, there are always further improvements to make. But his commitment to further ramping up the awesomeness of this Cayman can’t be denied. Just look where it came from – he thought of himself as a BMW guy, and this wasn’t even his car – and look at it now. It’s one of the most incredible Caymans on the scene right now, and we suspect its trajectory into the glorious oblivion of horsepower isn’t going to slow anytime soon…