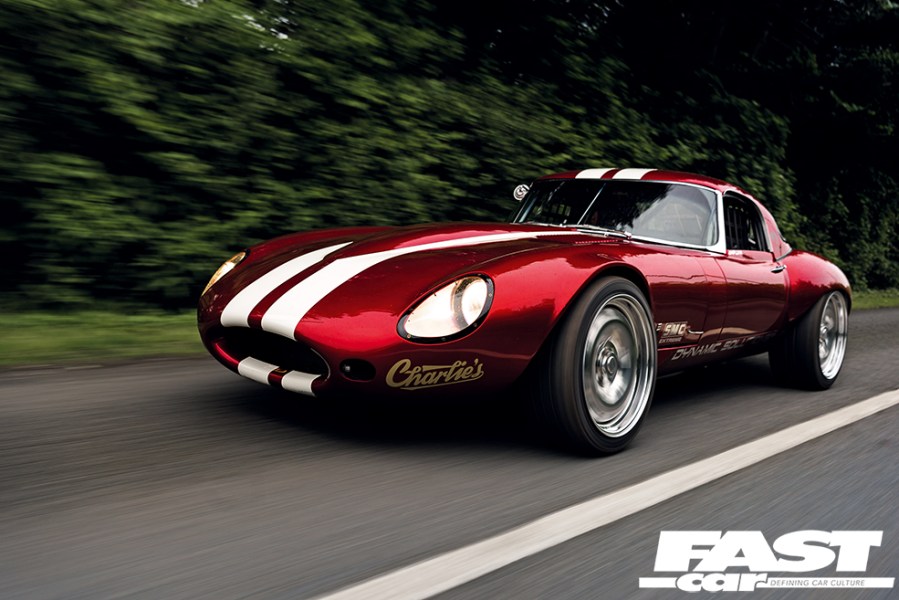 The idea of a Toyota-powered E-Type may sound despicably sacrilegious, but you have to set aside your prejudices when you meet the Japuar…

The Jaguar E-Type flicks a significant emotional switch. That’s a truism akin to pointing out the wetness of water; the sylph-like curves, the delicate chassis, the keen pricing that helped to democratise the accessibility of sports cars… you can understand why purists get a little hot under the collar when they see modified examples.

Such enthusiasts may wish to steel their nerves with a stiff brandy, however, as the E-Type you see here is some way removed from factory-stock. It’s a genuine, bonafide 1966 Series 1 Roadster, although its fundamental purpose has seismically shifted. It’s not for rasping to a country pub, clad in tweed and humming Elgar. It’s altogether naughtier than that.

Charlie Seward is the man holding the keys, and he’s keen to assure us that this is all perfectly healthy behaviour. His conscience is clear, as is his brother Nick’s.

“Our grandad won this E-Type in a bet, when he backed James Hunt to win the 1976 Formula One World Championship,” Charlie explains, and you have to admit that’s a hell of a statement to open a story with. “After taking delivery of the car in late ’76, he used it as a daily driver until it failed its MOT in 1988, when it was retired to being a yard car on the farm – right up until the early 2000s when the rust got so bad the Jaguar snapped in half! It had sat in the chicken shed from then until when we decided to dig it out in September 2014.”

We’re on safe ground if we park the common ‘sacrilege’ label, then – this is a car that worked hard, fulfilled its purpose, but was ultimately left for dead. Any form of resurrection would be welcome; the manner of metamorphosis we see here is frankly more than the Roadster could have possibly wished for.

Now, the story of how this formerly sedate drop-top evolved into a snarling beast is an entertainingly shocking one, so let’s tip-toe gently into the shallows of the tale by first taking a look at the aesthetics, before we move onto the really frightening bits.

Some of the Jaguar’s original exterior features have been retained, for the sake of nostalgic whimsy, including the filler cap, latches and hinges, and a variety of pukka Jaguar Heritage panels were used to replace the terminally rotten bits. It’s safe to say, however, that they’ve been monkeyed about with a bit… the front wings were massaged around the arches to allow for massive wheels, before returning to the factory lines further on, while the rears are custom widebody items fabricated in steel – the reason for all this is to house the colossal custom rims. Made to special order by Image, they ape the classic Dunlop design while serving up a rather wider footprint.

There are shades of the iconic Lightweight racers throughout the Seward brothers’ visual treatment, with the nosecone originating from a 1970s race car recalling the look and fastened down with straps, while the hardtop (a fibreglass item from Honeybourne Mouldings) and alloy boot sport matching Lightweight-style vents. A little nod to the veteran enthusiasts, although they needn’t get too comfortable… there may be classic Old English White stripes, but that vivid paint is actually Honda Candy Red. It looks like you could swim in that atmospheres-deep paint too; Charlie put three-hundred hours into the prep work alone, and the metallic silver base coat really makes it pop. Old meets new with the headlamps, the original units along with their metal surrounds and glass lenses being replaced by modern affairs with angel-eye sidelights and lightweight Lexan covers; teeny LED indicators peep out of the air ducts. It’s a visual treat, with oodles of variety and myriad jarring juxtapositions.

An unsympathetic restoration, then? Well, arguably yes, but that was never the point of this project. This isn’t a traditional resto, it’s evolution. “It was primarily built as a drift car,” Charlie explains. “The main drive behind the whole build was to upset as many people as possible by building what we believe to be the best E-Type on the planet. Saying that, it’ll also hold its own on grip events, and on the strip, where it’s run an 11.3-second quarter.” Fighting talk for the old Jag – so how does one go about transmuting headscarf motoring into headcase hedonism? The answer, somewhat surprisingly, comes from Japan and makes a high-toned whistling noise.

The Toyota 1JZ-GTE engine is the catalyst for all of this mischief; sure, the E-Type was sitting there gently crumbling and murmuring for attention, but it was this feisty turbocharged straight-six that really got Charlie’s mental cogs spinning. Having decided to get rid of his old NASCAR-inspired S15 drift car, he found himself taking the 1JZ in part-exchange. You can imagine how this thought process went: he had a hot engine sitting there, he had no car to put it in, he was looking left and right to see if a chassis might pop up, he happened to amble into the chicken shed… and then a lightbulb, an epiphany. Mischief was most assuredly afoot.

“I wasn’t sure about it at first,” Charlie admits. “But after quite a lot of cider, Nick and I decided to send the shell for sandblasting, to assess how viable it was. I was almost hoping nothing would come back… but then, when it returned, the front and rear bulkheads were still intact. So, you know, we had to go ahead with it!”

Charlie was well within his comfort zone, you’ll be reassured to note, as he owns Charlie’s Classic & Custom Body & Paint Shop down in Yeovil, and knows his way around a concours rebuild. An eye for the details is very much his MO. So, with a new set of sills, floorpan and boot floor from Jaguar Heritage, the two brothers got stuck in. A new front A-frame was built up from chromoly tubing to broadly match the E-Type measurements while allowing the Toyota motor to slot in, while the back end was wholly reworked for the harsh demands of drifting: an E60-generation BMW M5 gave up its rump innards for the cause, and all-new chassis components were fabricated to Seward specs. The front features their own double-wishbone setup with custom coilovers, the brakes being whacking great Willwood 6-pots; the rears are the M5 items native to the back axle.

And the engine? Well, you routinely hear of JZ motors being tuned up into four-figures, but don’t go thinking the 480bhp on offer here is any sort of compromise – in a car that weighs just 1,150kg it serves up mighty, tarmac-ruffling grunt, and it’s been tuned to have the maximum amount of power accessible in any given gear at any moment. The sequential turbos have been junked for a single GReddy T67 with a TiAL 60mm wastegate, and there’s also a single-jet alcohol injection system running 100% methanol. The whole shooting match is controlled by the revered Syvecs management – all wiring having been taken care of in-house – and it adds up to a frankly terrifying machine on every conceivable level.

Terrifying, yet… somehow rather charming too. Peeping inside, you’ll spot that the Series 1 dash lives on, albeit studded with fresh gauges. There’s also the addition of a pair of Kirkey competition seats. There may be a hydraulic handbrake and a chunky rollcage too, but there’s also quilting on the trans tunnel. So it’s obvious that these guys haven’t lost sight of the Jaguar’s heritage and, much as they’re keen to upset the applecart, it’s endearing to note that they haven’t quite abandoned all sentimentality.

What the Seward chaps have achieved here is a glorious melange of seemingly inappropriate approaches. The phrase ‘drift E-Type’ sounds inherently wrong, but your perceptions are shattered when you see the quality of this build – it’s phenomenally fast, astoundingly capable in a variety of motorsport disciplines, and it truly showcases how outstandingly skilled these designers, engineers and fabricators are. There were no diagrams for any of this of course, they made it all up. And the best part of all? It’s carrying on the legacy of an old family friend; a Jaguar with a hell of story behind it, writing a new chapter in its history that’s just as wacky as that unlikely bet back in 1976. James Hunt would have liked this. Grandpa Seward would find it hilarious. And you can be damn sure that Charlie and Nick are far from done annoying people with it. Long may the mischief continue.