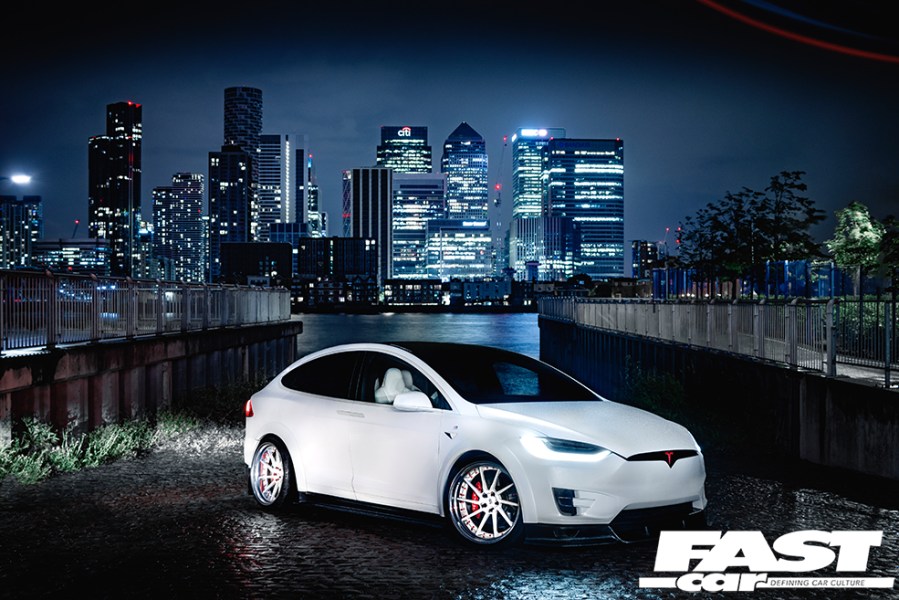 As a dedicated petrolhead at heart it took something pretty special to convert Andrew Dharman to electric transportation, but even when a Tesla Model X won him over, he couldn’t stop his desire for a modified motor.

There’s something inherently right about internal combustion engines. Yes, they may technically be inefficient, they may lack the instant torque of an electric motor and they may produce harmful emissions when they are in use and need the juice of dead dinosaurs in order to run, but my god they sound good don’t they? And this is an area that electric powered cars can simply never live up to. So, if this is the case, why would a devoted petrolhead like Andrew Dharman make the jump to buying the most ludicrous of electric vehicles available – a Tesla model X SUV of all things?

“It was my wife that first suggested we get a Model X,” shrugs Andrew. “At the time I was like ‘No way! They’re electric!’ as I’d never even considered myself becoming an owner of an electric car, I just liked petrol power too much.” 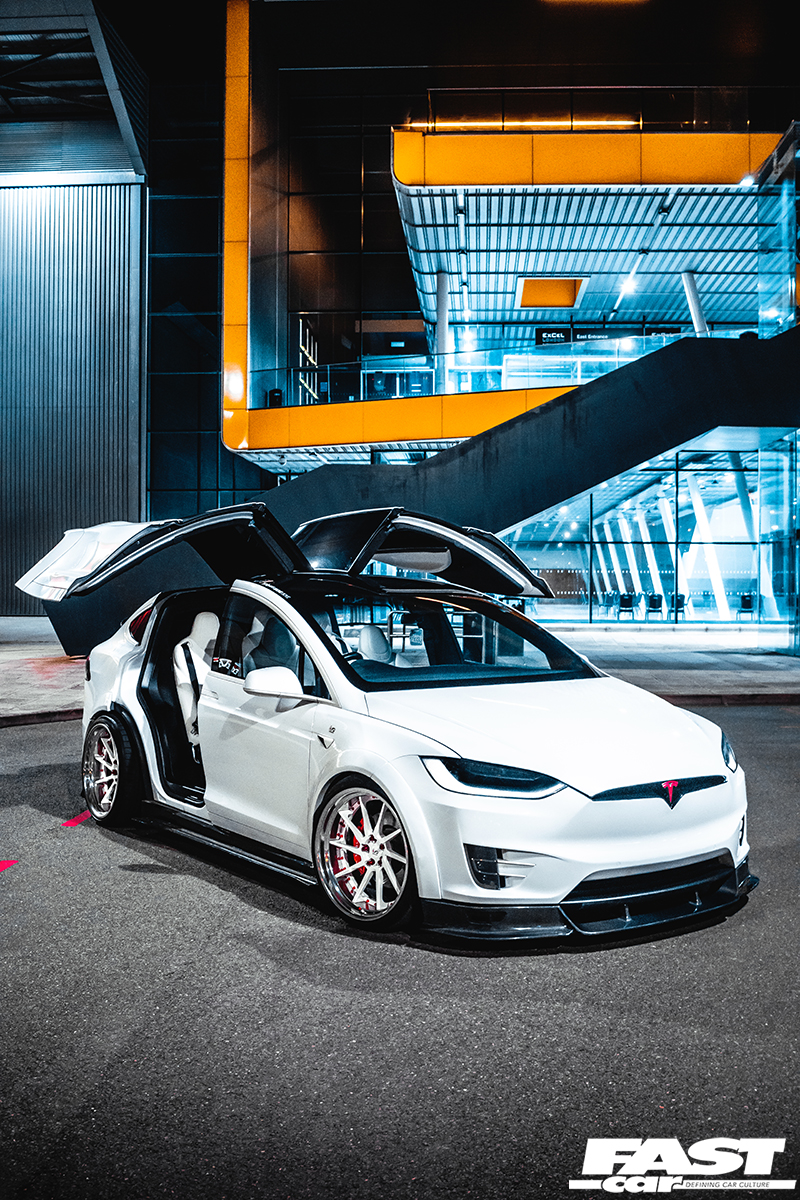 Coming from a background of owning big power Bavarian autobahn stormers, it was only natural that Andrew was feeling somewhat skeptical about the thought of going electric.

“One of my previous BMW builds was in Fast 6 in the beginning of the race between Dom and Letty,” Andrew reveals proudly. “Shaking hands with Vin Diesel was the pinnacle of car modding culture for me. It was an unreal moment.” 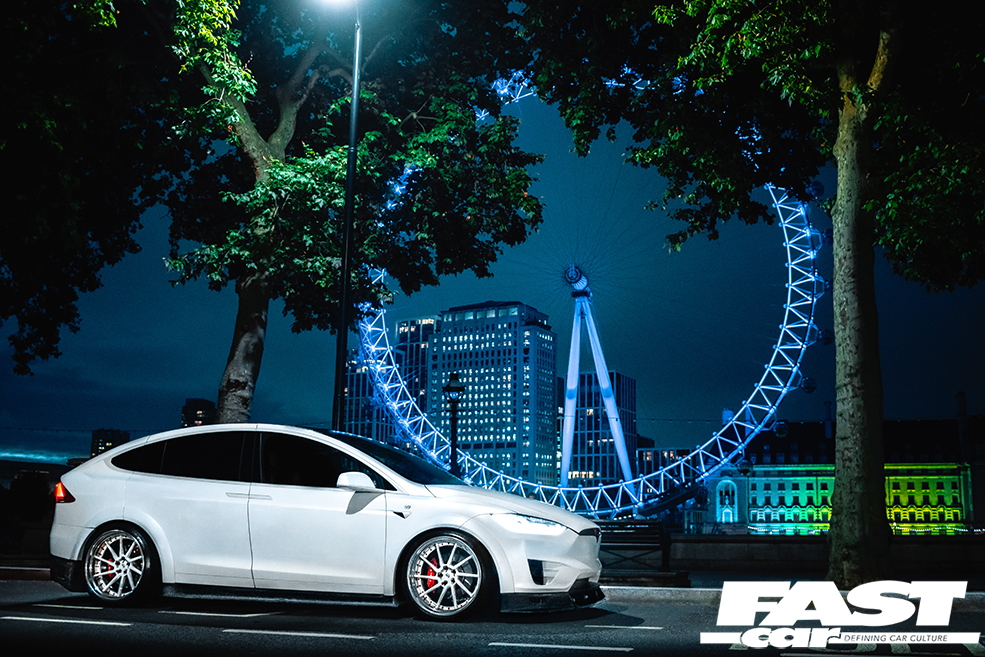 But you know what they say: ‘Happy wife, happy life’ and with Andrew’s other half with her heart set on the tyre shredding Tesla, he felt it was only right that he at least took one for a test drive.

“The Tesla Model X is unlike any other car out there,” he says. “Of course you get in through the bonkers falcon wing doors and then have the huge windscreen arcing over your head, and the rest of the interior is like a spaceship, but to be honest, none of the visual tricks were really doing it for me. I was still very unsure whether this could actually deliver the thrills that I wanted.”

But even with petrol coursing through his veins, it didn’t take long for Andrew to start to realise the benefits of an electric drivetrain. 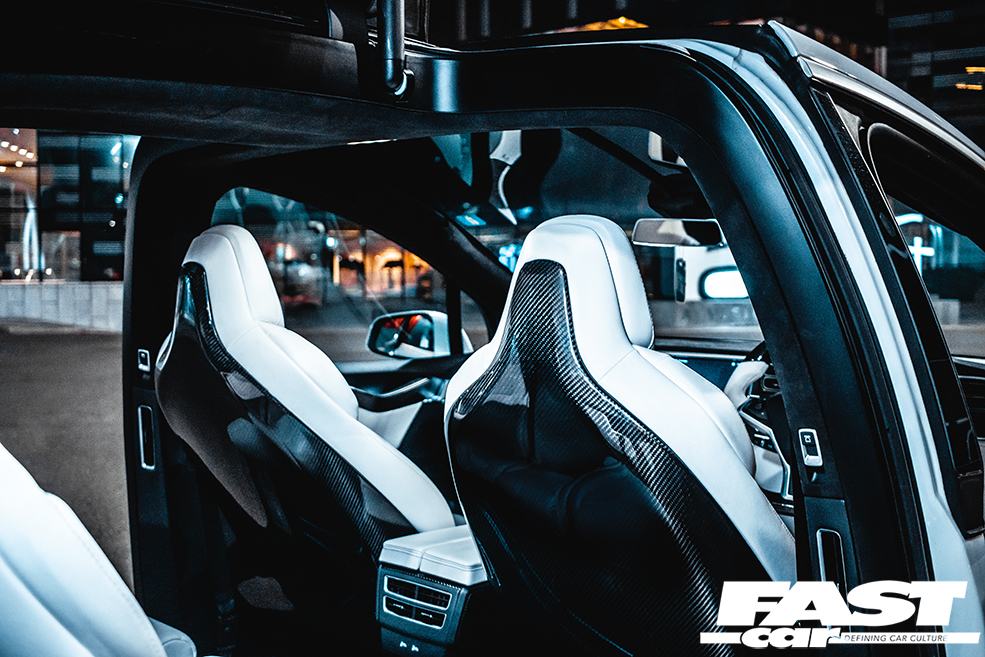 “I knew I had to have the car when I put the stalk into drive and it just went!” he laughs. “From a “cold start” the power was just there. The torque is something else. It was smooth and effortless. There was obviously no noise but I didn’t mind. It felt different. It wasn’t a V10 (which I also have on my driveway) but something far more exciting. That mind-warping speed coupled with the incredible handling meant it honestly felt more like a sporty hatchback than a two tonne seven-seater.”

And so Andrew was sold, his steely wall of skepticism crumbled like a house of cards and in no time there was a Sparkling White Model X sitting on his driveway, mocking the petrol-powered relics that it shared its new home with. 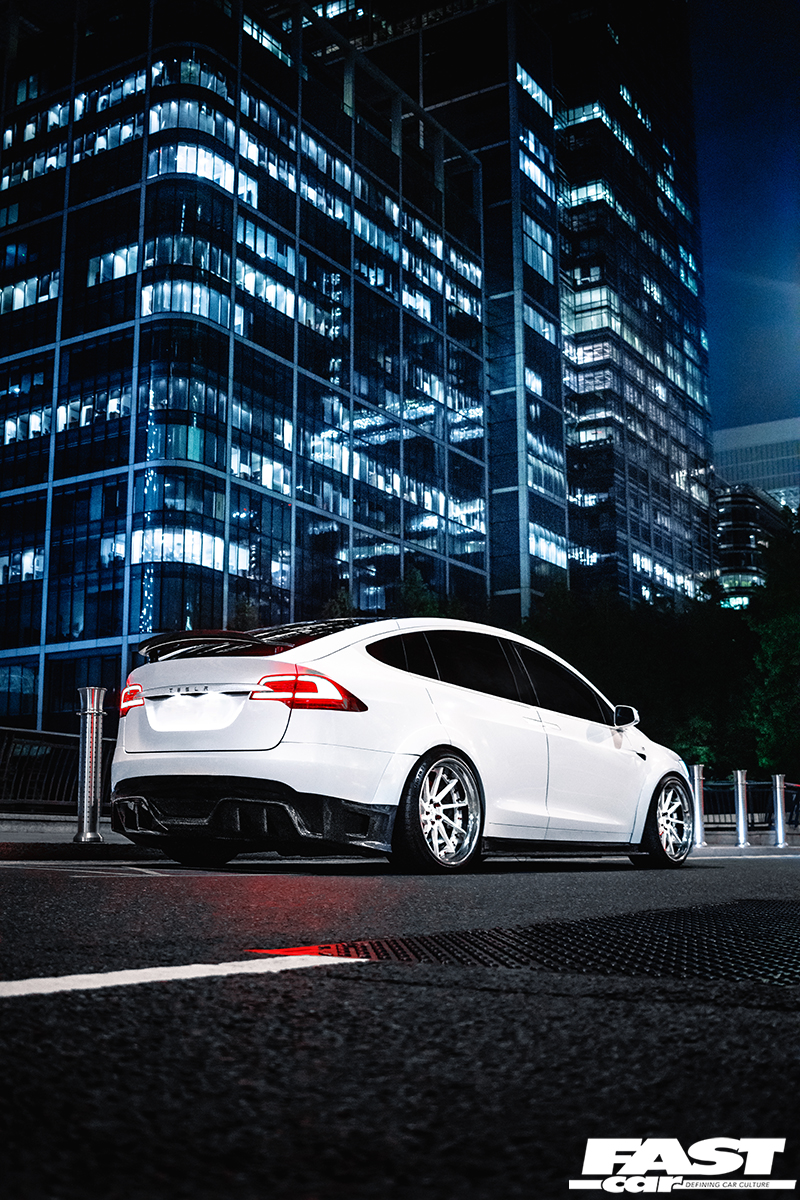 Of course, being a serial modifier, Andrew wasted no time planning how he was going to enhance and personalise the vehicle to his own taste.

“I was inspired by a couple of cars in the US who have the Revozport kit, so I contacted company owner Charles Wan as there were no Teslas in the UK with the kit at the time,” says Andrew. “I didn’t quite order all the parts as I had a vision for the car and didn’t want it too extreme. When the parts I’d chosen arrived, it was all fitted by my local bodyshop who I’ve used many times before for pretty much all my cars.” The Model X came with factory air-ride (which cleverly has GPS memory, so it can raise or lower automatically when it arrives at certain locations), and Andrew’s added Evolution Airmatic lowering links which allow him to maintain full functionality of the suspension but also trick it into sitting even lower on demand. The arches were then filled by a set of Vossen 22in wheels, with a lot of thought going into the tyre choice – Continental SportContact 6 – as it was always the intention to drive the Tesla hard. 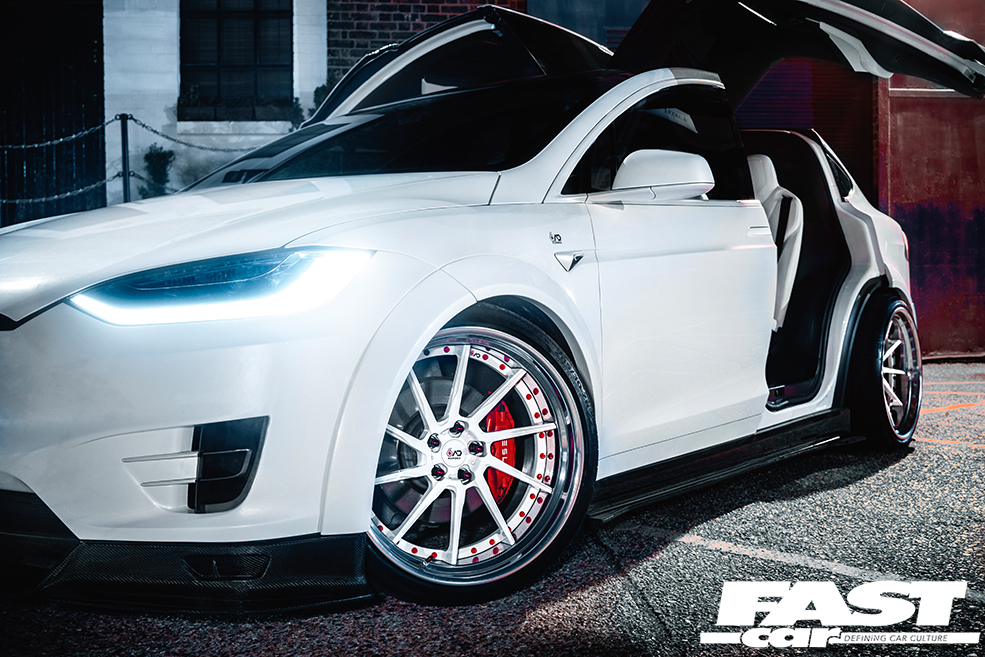 “I’ve done a couple of Euro road trips over the last two years, through Holland, Germany, Switzerland, Italy and France,” he enthuses. “It’s free to use Tesla Superchargers, and it takes thirty minutes to get around 250 miles of charge. There are many more Superchargers dotted through Europe than there are in the UK, and the car tells you where the nearest ones are. My most memorable road trip was with Urban Racers through Switzerland to Como, which was amazing fun; the Tesla did brilliantly well and kept up with the supercars with no problems! Plus it’s such a head-turner, especially when the doors go up…”

The responses to the car at shows have been universally positive – and somewhat gobsmacked at the drama and theatre of the spectacle. Andrew was welcomed into the carpeted VIP area at FittedUK, the indoor hangar at Players, and the VIP section at BrokeBoys. Everywhere the modified Tesla Model X went, curtains part and velvet ropes were lifted. “It was also on display at TRAX, and I took it on track at Silverstone,” he beams. “It handled brilliantly well, and people are always so shocked to see the performance of a seven-seater SUV.” 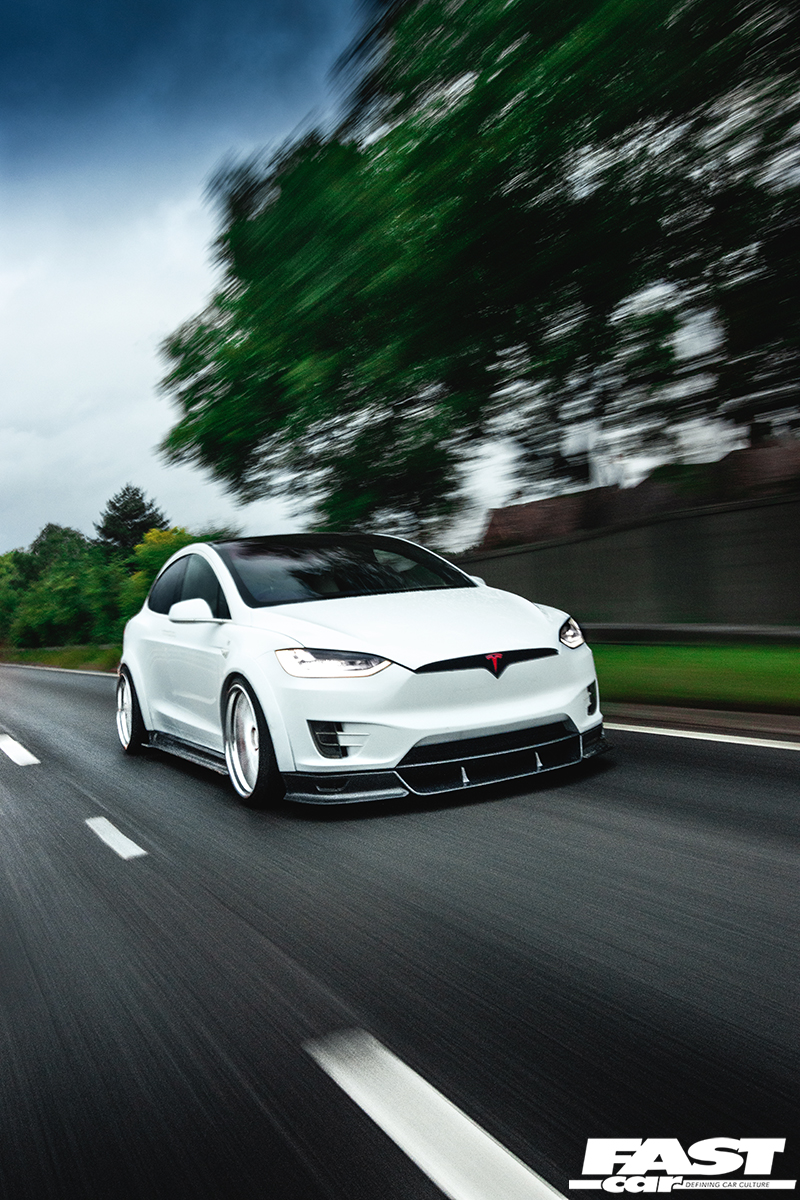 But then Covid hit and the world was plunged into lockdown, meaning Andrew could no longer get his fix of wide-eyed adoration for his mighty machine. Not one to let an opportunity pass him by however, Andrew concocted a new plan to revamp the Tesla once again to ensure that none of its impact was lost when the world would eventually return to some form of normality.

“During the lockdown I had a vision of something really unique as I knew there weren’t many wide arch, modified Tesla Model X cars around,” says Andrew. “In fact, this is now the only one of its kind in the world to be running these mods.” 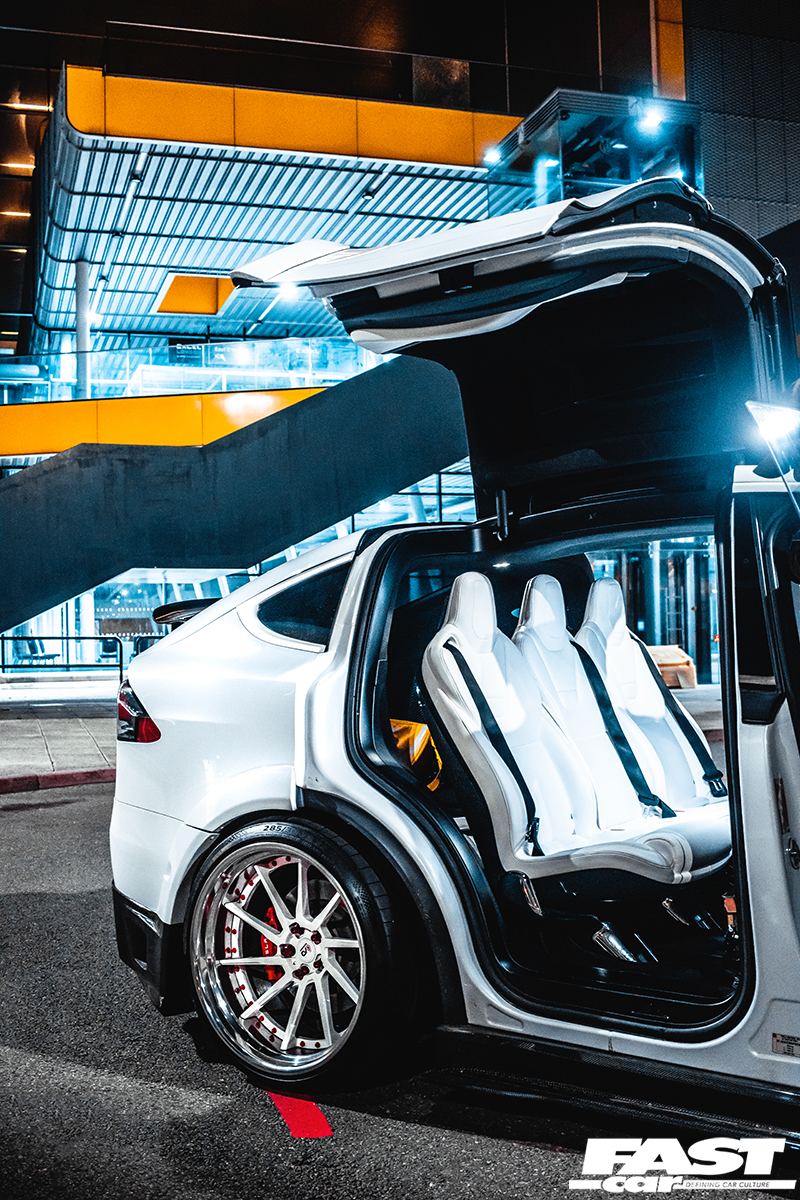 The car already had the Revosport low line kit of front splitter, sideskirts, rear diffuser and ducktail spoiler, but Andrew then added a full carbon-fibre wide arch kit into the mix that he had painted body colour.

“The wide arches line up perfectly with the low line kit that was already installed and really give an aggressive look to the car,” he says.

Continuing the colour coding theme, Andrew had all the plastics repainted Sparkling White which is a triple layer paint that has a real depth to it and shimmers in the sunshine. 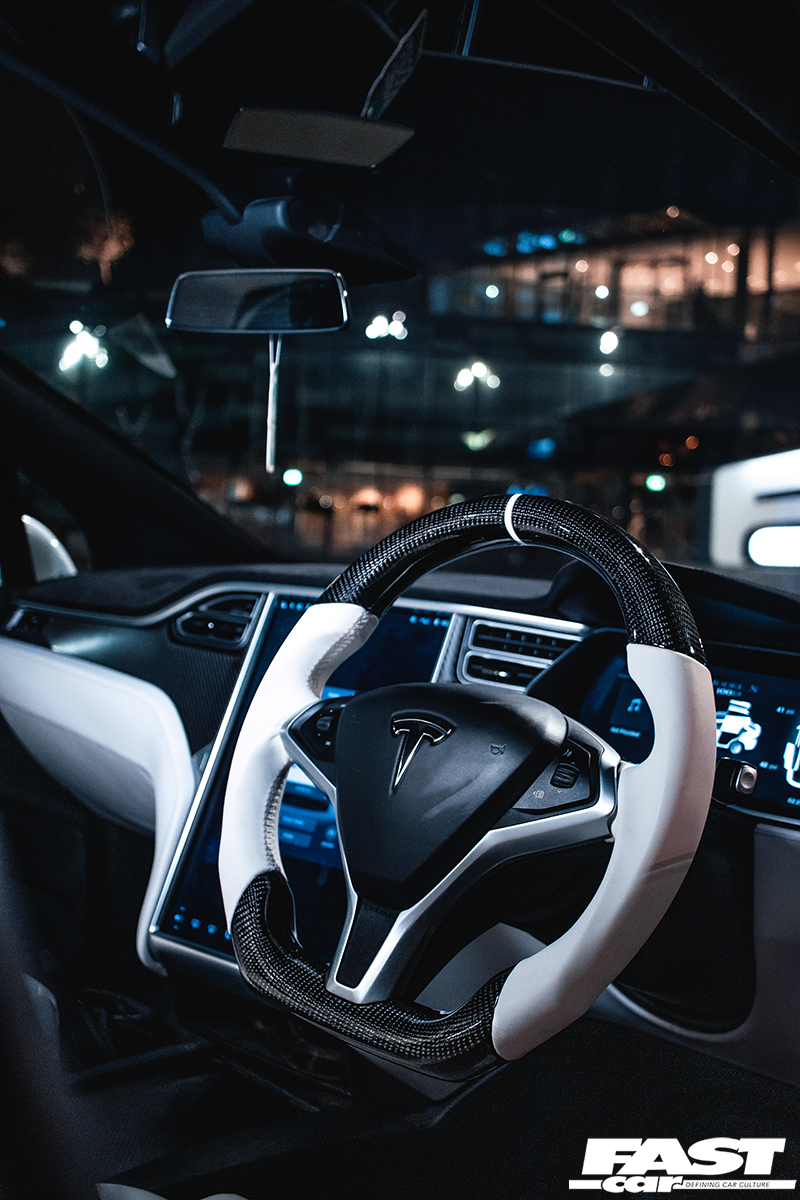 Obviously, adding a wide arch kit meant that the previous Vossen 22s were looking a little lost in the new bulging quarters, so the search was on to find a more suitably beefy alternative.

Andrew is arguably in the best position possible to source a set of unique and stunning rims, as he is a distributor for the awesome 6AD Forged wheels.

6AD Forged make custom lightweight forged wheels to your own exact specifications and Andrew took full advantage of his connections to design the perfect set of hoops for his electric wonder wagon. 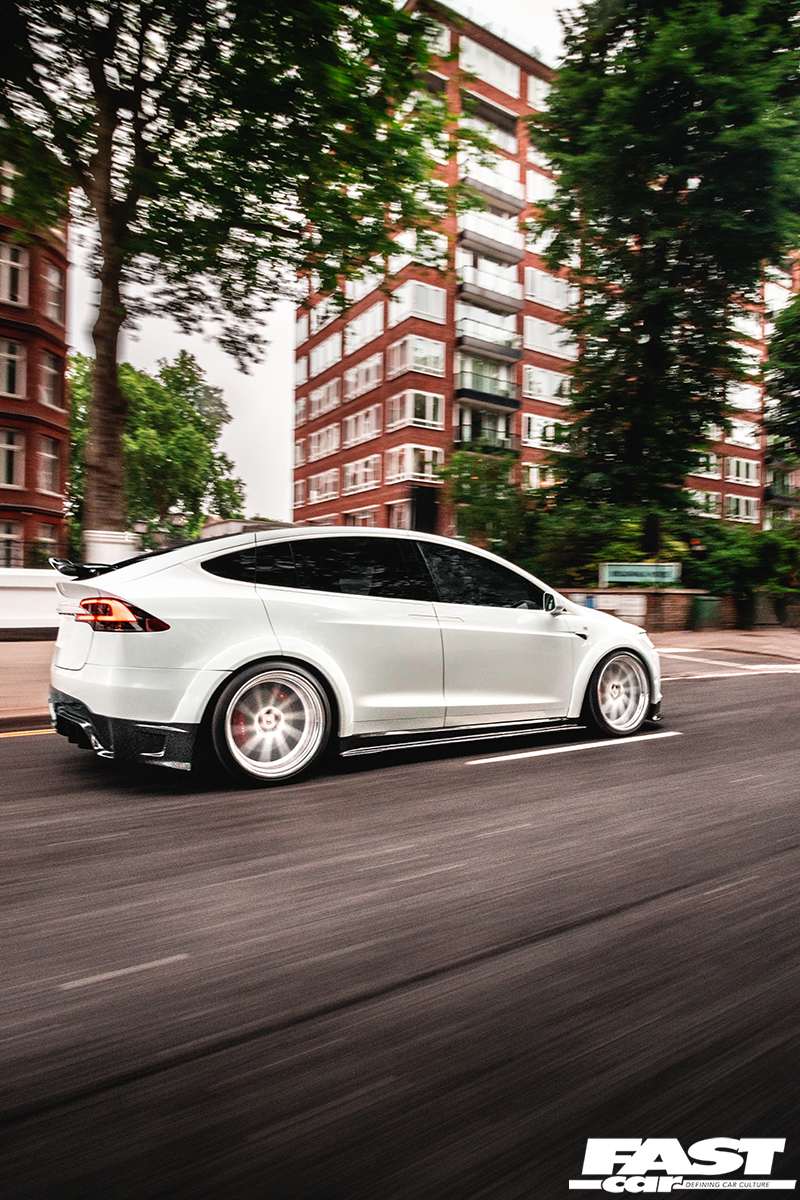 “The 11x22in 6AD2.52s have a rotational design which is reverse on the left and forward rotation on the right to give two subtly different looks from each side,” he says. “The negative offsets are staggered with -20 rear and -10 upfront. This results in 3in and 4in lips. The faces are gloss white and have an inbuilt concave, so even with the dish, the wheels have a concavity which has to be seen rolling to be truly appreciated. They are made from aerospace grade aluminium and made to measure with custom PCDs and offsets so no need for spigot rings or spacers.” 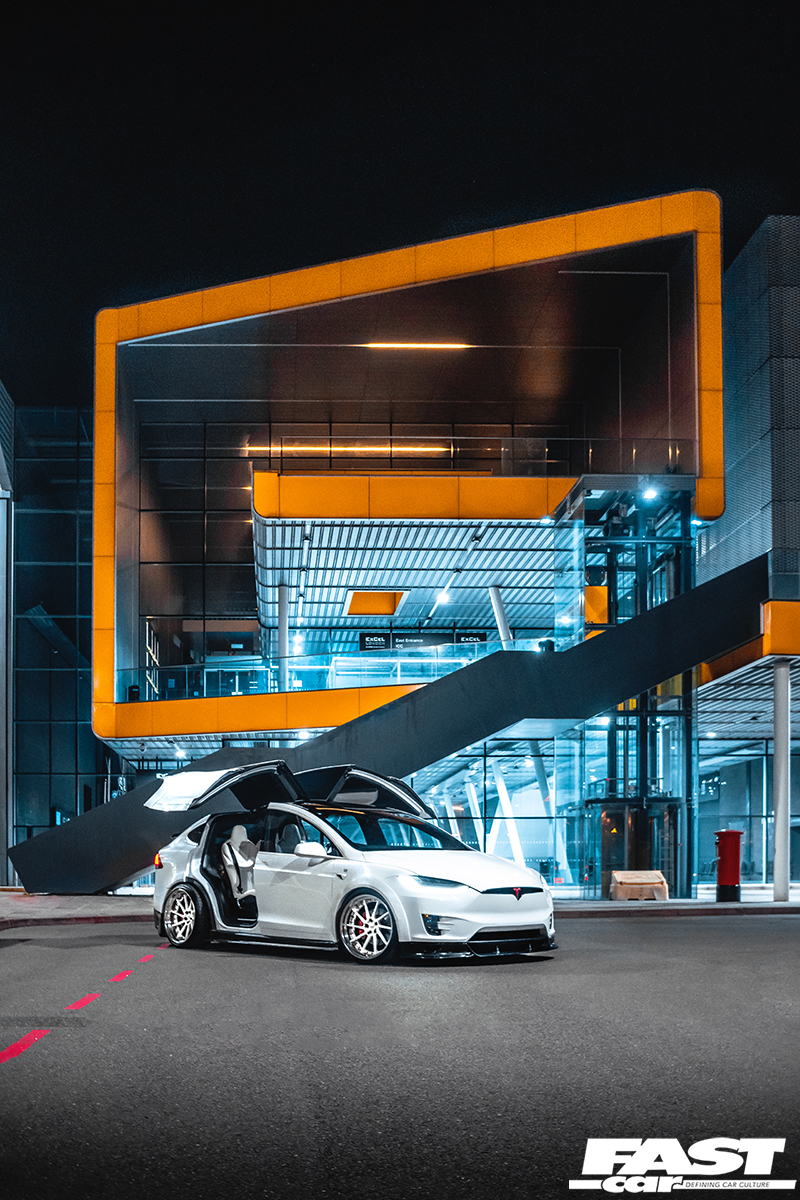 The final cherry on the top of the cake for the modified Tesla Model X is a full undercar LED kit that harks back to the glory days of the modified car scene and Andrew’s tuning roots. 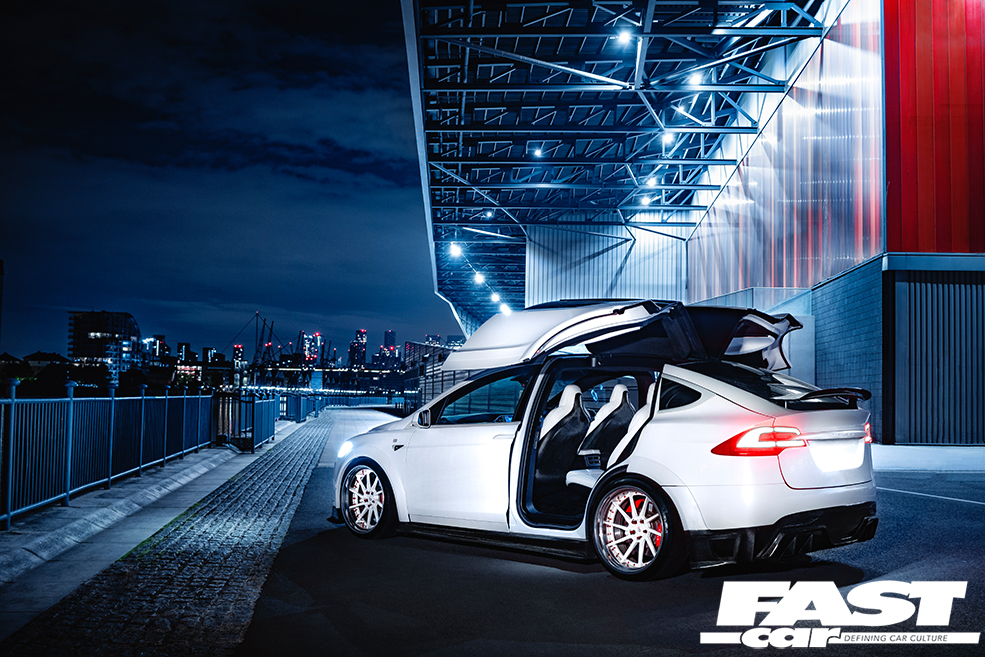 “It’s just a bit of fun really, which this car has in spades,” he laughs. “From the dancing doors to the Autopilot and all the other neat tricks and gimmicks the car can do, there’s just so much to like about the car.”

But this is one car that is far more than just a gimmick. Here is a two tonne, seven-seat SUV that can crack the 0-60mph dash in 4.2 seconds and show a clean pair of heels to most supercars, be that on track or on the road. Add in the fact that it looks like a UFO, wafts around in near silence and can automatically upgrade itself through Tesla’s frequent wireless upgrades to power, performance and even more techy tricks, and this is a serious machine that even a die hard petrolhead can’t fail to respect.