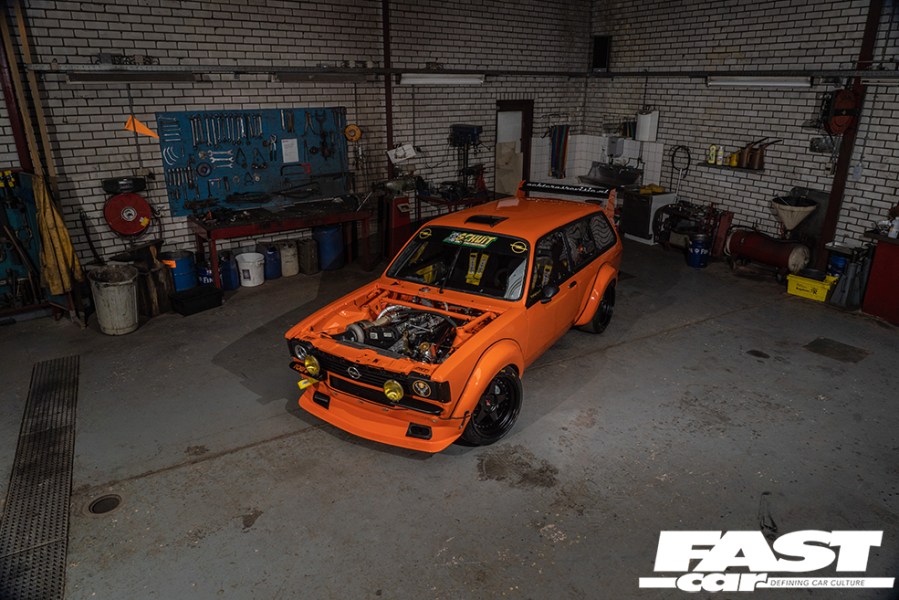 Anyone who spent their formative years watching The Inbetweeners will have quite a skewed view on the subject of caravans. Why would you want to go on holiday in a wheeled box where you essentially poo right next to the dinner table? There’s no fun in that.

But caravans can be cool. Back in the late-1990s, a friend of mine used to have a caravan in his garden, which his folks bought when he was studying for his GCSEs. He shared a bedroom with his younger brother, so they picked up this rickety old hulk to park in the garden and give him a quiet place to study. It had served its purpose well as a holiday vessel for some other family and now, in its crumbling twilight years, it found fresh purpose at the hands of a group of mischievous teenagers (i.e. us) who wanted somewhere unsupervised to sit and smoke straggly rollies and drink improbable quantities of whatever was on the eight-cans-for-a-fiver rack at the village offie. Sometimes, after a protracted bout of truth-or-dare Jenga, fuelled by wild quantities of mind-alteration, we’d go off a-wandering in the countryside. 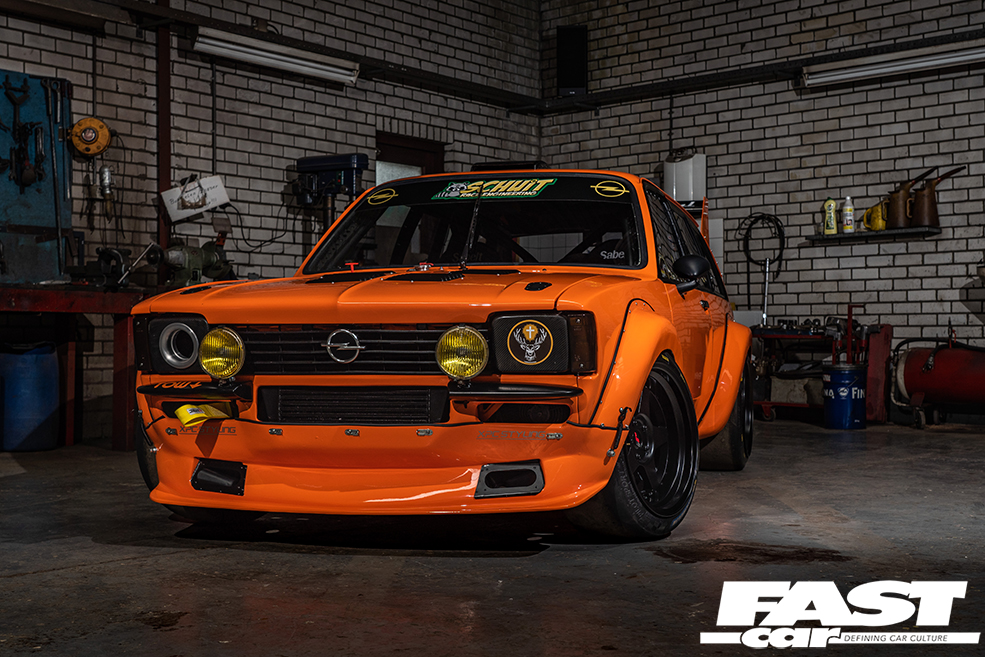 City folk can’t appreciate the country on the same level as born-and-bred village kids, not unless they’ve spent their youth – or misspent, the line between the two is inconsequential really – wandering around in fields at night. Walk for long enough, you reach a state of near-perfect darkness, far from the invasive streetlights, where you’re illuminated solely by the moon and the stars. You step in all sorts, your legs get scratched up like crazy, but none of that matters. You’re experiencing a world which is a daylight everyday for farmers and dog-walkers, but an entirely different arena as you crash through as if blindfolded. The glowing cherries from our rollies were the only pinpricks of light in an otherwise inky void. That darkness was ours.

What relevance does all of this have to the jaffa-orange Opel adjacent to these words? Quite simply that in the European market, this junk-in-the-trunk model wasn’t referred to as an Estate (or ‘Station Wagon’, ‘Touring’, ‘Shooting Brake’ or anything of that nature); no, Opel called this model the Kadett Caravan. 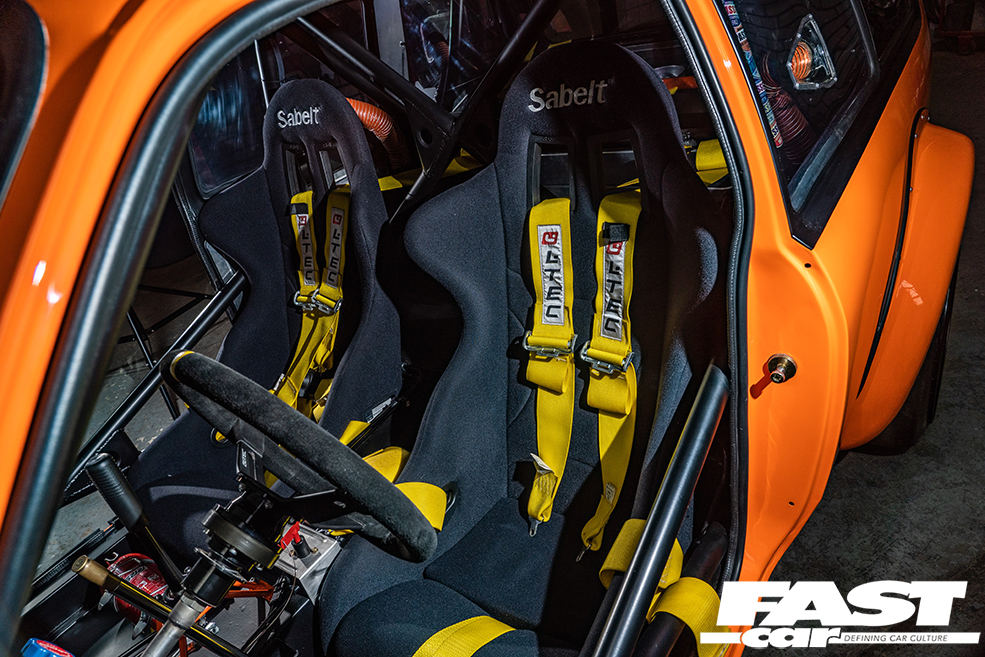 Yep, that’s the full extent of the tenuous link. But given that this is our final issue of Fast Car, this logic feels close enough. The old ‘write drunk, edit sober’ adage that’s been swirling around literary circles for generations is all very well, but we’ve slightly modified the second part. Feel free to send your complaints in to the usual address; the lights will be off and we’ll be in the pub.

Operating with markedly more focus than any of this was the Opel’s doting creator, Erwin Schuit, and it’s fair to say this sort of thing has been in his blood from day one. Growing up in the Netherlands, he’d been around modified cars since the time he was first able to crawl, and he learned from first principles how to restore and customise cars, working alongside his dad long into the deep winter nights. It’s hardly a surprise that Erwin has blossomed to become an engineer, building and maintaining BMWs for racing and rallying. 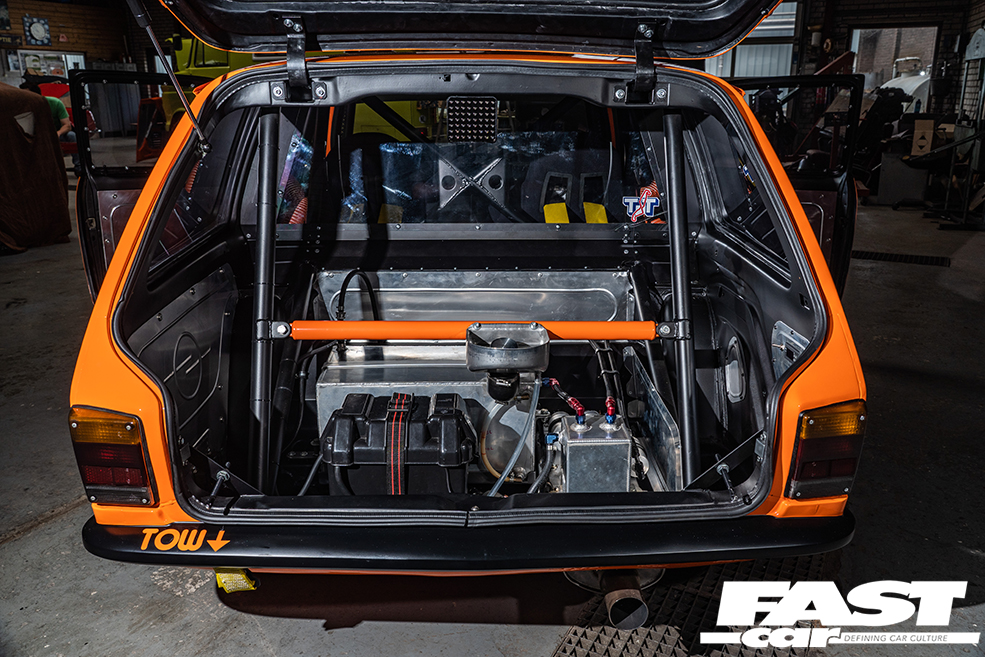 So if BMWs are the bread-and-butter, why is he mucking about with an old Opel in his spare time? Again, it’s something that’s been simmering in the proverbial pot for many years. “I’ve always been a big fan of the Kadett,” he says, “and particularly the Caravan because it’s something that you almost never see at shows – so that had to be the one for me. I had a clear aim from the start too, to make it the fattest, fastest Caravan out there; I wanted to develop myself as well as the car, and the most important part of all was to have a bit of fun with it.”

There’s an interesting evolutionary element to the finished product that you see here today (if indeed it can be called ‘finished’, which project cars obviously never actually are), in that it acts as a sort of fusion of the two projects which came before it. Starting out on his solo modding adventures, Erwin began with the saloon version of the Kadett C, which ended up boosted and slammed and all sorts, before he jinked off on a tangent and bought a Volvo 940 Turbo, of all things. Proper Gatebil vibes with this one, he wound the motor up to 265bhp, dropped it on the floor, and gave himself something of an epiphany. Smooshing those elements together could create something really special. And so it came to pass – a 1976 Kadett C Caravan was duly acquired. Malevolently steepling his fingers together, fiendish plans were brewing. 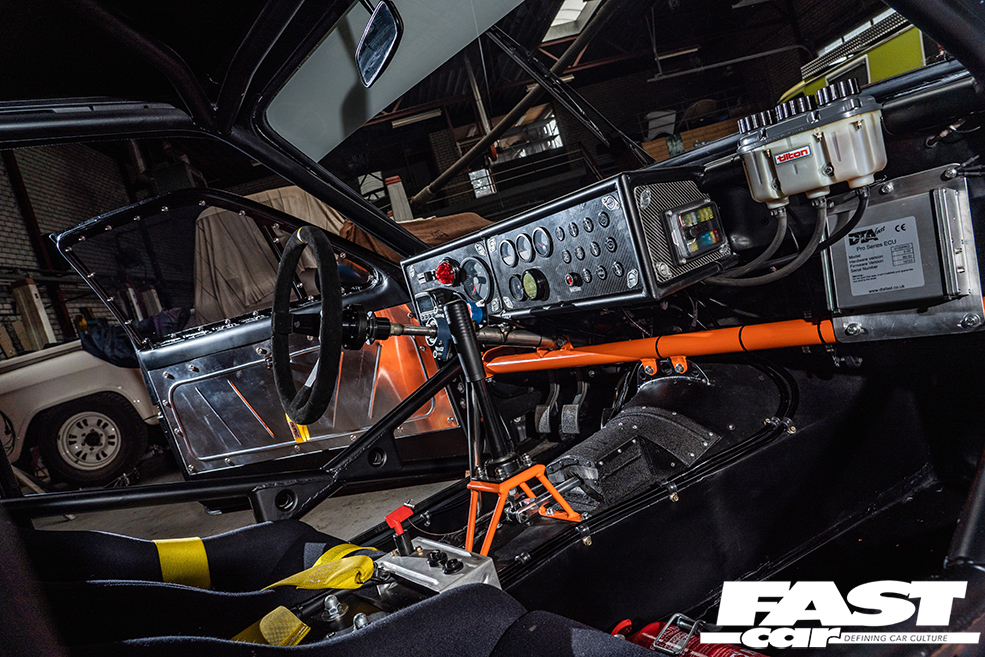 “The bodywork was the part that took the longest, by far,” he says, with a world-weary sigh. “There was a lot of rust, let’s just say I had to make quite a lot of adjustments…” Such adjustments are plainly evident from the car’s bullish profile, which has been amped up to an absurd degree thanks to a smorgasbord of composite panels: the bonnet, bootlid, front spoiler, arch extensions and even the doors are lightweight facsimiles, and even without the lurid orange paint it’d be something of an eye-catcher – not least because of that colossal home-made rear wing. And of course this isn’t all just about the look: Erwin’s keenness on creating ‘the fattest, fastest Caravan out there’ would involve rather a lot of horsepower.

“I was initially inspired by various iconic race cars from the 1970s and ’80s,” he says. “And the build has evolved over the years as I built custom parts for it and added other things I found; it’s grown and developed as I have, and the car just kept getting more and more extreme.” 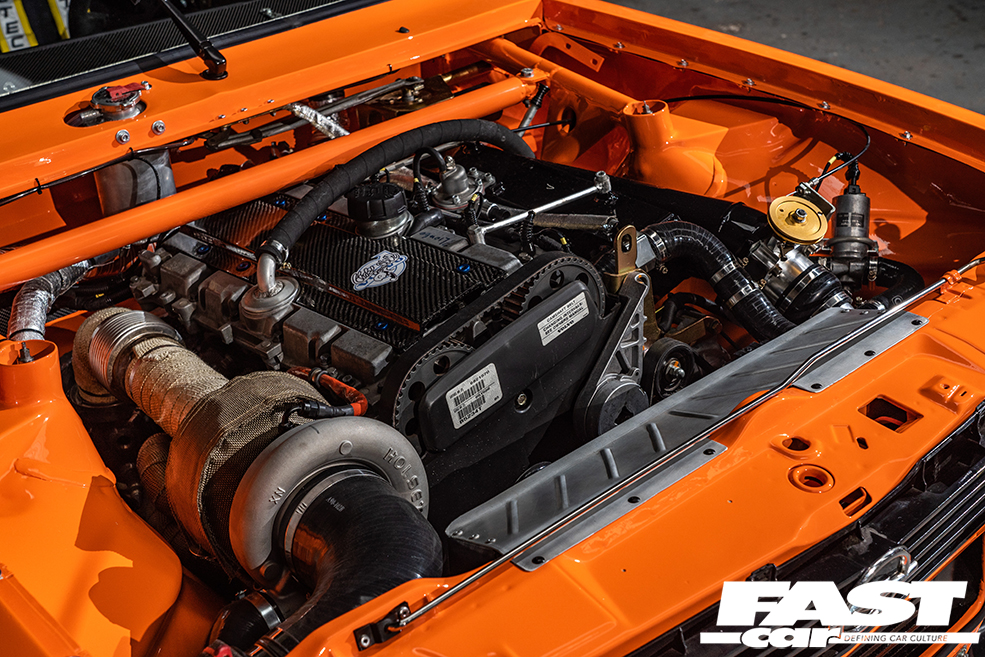 Indeed, there’s very little Kadett left in the chassis whatsoever. Erwin has fully customised the underpinnings, making a full new floor from scratch and creating a frame for the four-link rear suspension in the position where the rear bench used to be. The sills have been modified and the chassis beams replaced, and the level of engineering prowess is remarkable – he’s custom-made upper and lower wishbones at each end, made fully bespoke mountings for the KW V3 coilovers, upgraded to Volvo S60 R brakes all round… and that’s before we even get to the drivetrain.

Roundly dismissing all of the in-house Opel options, Erwin has opted for the five-pot boosted motor from the Volvo 850 T5, and even in stock form this would have been a brutally powerful engine for a car this small and light. It isn’t in stock form though; very far from it in fact, as he’s seen fit to port and polish the head himself, drop in some oversize pistons, add the cams from a nat-asp 2.5 850, massively uprate the fuelling, and hang a sodding great front-mount in the nose. The crowning glory is the mighty Holset HX35 turbo, and the ones-and-zeroes are all knocked into shape by a DTA S100 standalone ECU. The result? Hysterical numbers for a car that weighs about as much as a packet of Golden Virginia and a half-full pipe of Pringles – we’re talking 406bhp and 406lb.ft at 1.3 bar, with potential for plenty more. 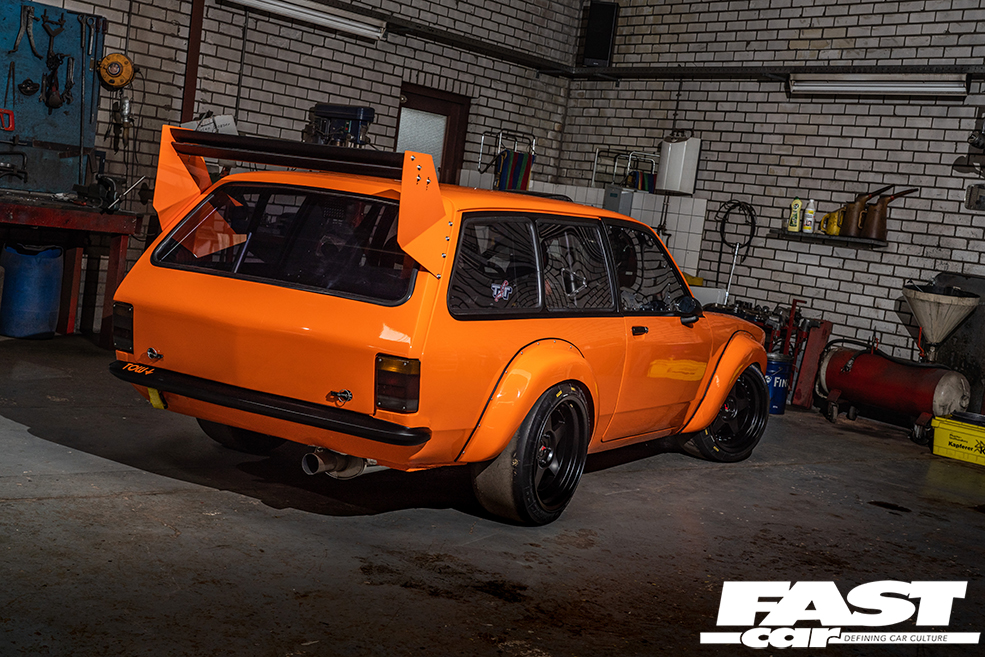 “I’ve been working on this car for ten years now, and I’m always developing and inventing new things for it,” he enthuses. “Every part on the Opel Kadett Caravan has been modified, custom-made, borrowed from a completely different car, or even from a Bobcat mini-digger. Fitting such things was a win for me every time, because there will always be other times when you spend weeks making a piece of sheet metal that you then cut out again a few days later because the next part doesn’t fit.” That, of course, is the nature of being a trail-blazer. You’ve got to hack your way through the undergrowth, there’s no easy path. But Erwin is supremely adept at finding his way: foot to the floor, into the deepest darkness of the night, the blazing cherries of his Opel’s taillights the only evidence that he was ever there. The night is his own, and so is the Caravan.