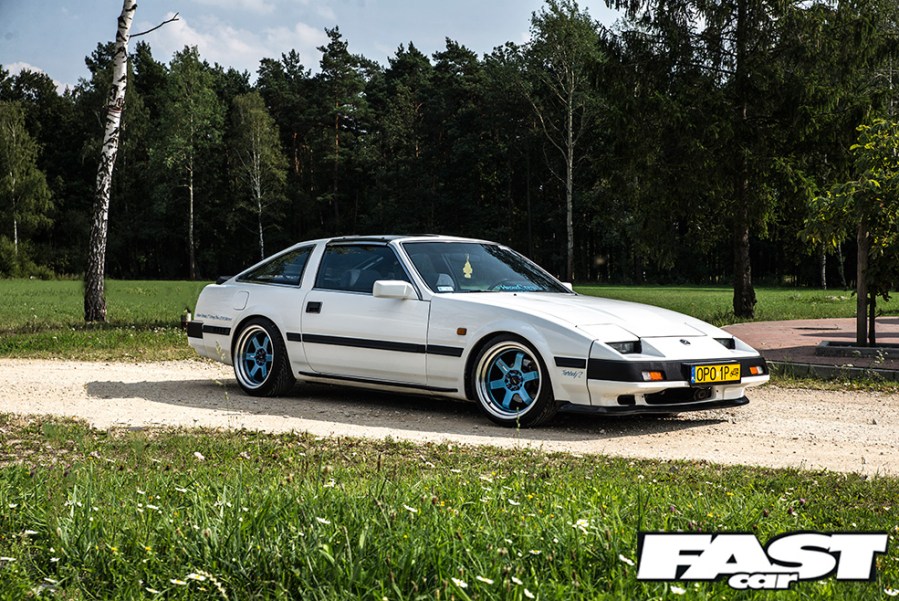 It took an epic journey for Rafal Kotysz to finally realise his Z31 dreams. This sparkling white Targa shows that you should never stop chasing the one that got away

Today’s modifying scene, more than ever, is polarised between two main approaches: the ostentatious, and the less-is-more. Both methods have their merits, and it’s all in the execution, but it’s safe to say that for every outrageous widebody Lambo there’s a few dozen tastefully upgraded retros. And you could even argue that the minimalist approach is far harder to pull off: if you’re building a money-no-object supercar you can go hell for leather with your wallet, throwing cash at every aftermarket manufacturer who takes your fancy and pulling together a colourful jigsaw puzzle of big-name additions.

However, accentuating the simple purity of a design, requires a light touch. Some of the classiest builds are the ones where people who aren’t in the know wouldn’t realise that anything’s been done at all. Naturally it’s a tightrope, though – where do you draw the line between a car that’s been subtly enhanced, and one that’s been done in a half-arsed manner?

Rafal Kotysz is a man who’s got this formula pretty much nailed. Regular readers may recall his Mitsubishi Starion, which we featured a few months back – an exercise in subtle enhancement, it accentuated the classis Mitsi’s stunning body lines by throwing in a custom air ride system… even though the engine was stock (and so were the wheels!), Rafal’s approach created something that was just implacably perfect. Timeless design, flawless execution.

He’s played another blinder with this Z31-generation 300ZX too, hasn’t he? A keen eye for classic design means that this old-school wedge slots perfectly into his favoured approach. And with this particular car, the end-game has been a long time coming…

“Once upon a time I remember seeing a beautiful Z31 for sale,” he recalls, slightly misty-eyed. “It was lowered, sitting on BBS alloys – it looked amazing! But it was a bit too expensive for me at the time, and I took a little while to make the decision. When I eventually decided to buy it, I called the owner… and he told me he’d just sold it! That was the moment I told myself that I had to have one like it one day.”

It’s a strong position. After all, the allure of the Z car’s cult cannot be denied, it’s been drawing enthusiasts in for generations. Ever since the 240Z arrived back in 1969, offering an offbeat alternative to the Jaguar E-Type, buyers have been flocking to these hairy-chested little coupés – whether it’s the sylph-like old S30 that flicks your switch or the modern 370Z bruiser, you’ll always have a good time in a Zed.

What’s interesting right now is that the Z31 is gradually coming to prominence too; it’s long been the overlooked model in the line’s history, but the oh-so-eighties version that was on the market from 1983-89 has managed to fight off the criticisms of looking ‘too eighties’ and come out swinging. People are viewing it in a new light. And that was precisely Rafal’s viewpoint.

So, back to the hunt… “I spent hours on the internet searching for a Z31 that was just right,” he explains, “and in the end, after a lot of looking around, I finally found a white 1986 300ZX Targa that looked like the one. Some Polish dealer had bought it from a scrapyard in Germany, and I bought it from him. It was in a pretty bad way, but I could see the potential! The front and rear lights were all broken, and it was missing the rear windows and the rear spoiler; the fuel tank was full of rust and quite a few of the smaller trim pieces were missing too. On the other hand, the body panels were straight and had very little rust. So my first move was to start collecting and stockpiling all the parts I’d need to restore it, and while I was doing so I handed the Z to my body specialist Zygmunt Lipok so that he could work his magic.”

While this wasn’t a full-blown salvage operation, thanks to the straightness and originality of the car, there was still a hell of lot of work involved to get the body ship-shape, for two key reasons: firstly, Rafal and Zygmunt are perfectionists, and secondly, this isn’t just a car – it’s the realisation of a dream. The one that got away might have, er, got away, but Rafal was determined to doggedly pursue the idea regardless.

And so the Z31’s chassis was stripped and sealed, and the body had its old paint removed and every last iota of corrosion aggressively chased out and repaired before the shell was prepped for the new paint. The plan was always to keep the original colour, although Rafal wanted to give it his own twist, so instead of flat white it’s now a sumptuous pearly white, with an extra frisson of metallic blue finely misted over to really make those retro body lines pop.

“The wheels came next,” he says. “They’re 17-inch Japan Racing JR12s, which have been painted in the same shade of metallic blue that was subtly ghosted over the body – I think the colour combo works really well, particularly with the neo-chrome lug nuts.” And as we all know, bolting big wheels to classic cars without doing anything about the suspension is a one-way ticket to ridiculous off-roader ride-height, so Rafal had to set about sorting that too. Although it’s not as easy as you might hope. “It’s very hard to get lowering suspension for the 300ZX in Poland,” he tells us, “so I decided to combine the original Z31 struts with a set of MDU coilovers designed for the Nissan 200SX. A bit of cutting, a bit of welding, and it all worked out really well!”

The final flourish was to ensure that the car’s lusty V6 could really find its voice, something which was achieved by a visit to RM Motors, who fabricated a full custom stainless steel exhaust system with shotgun tails – now the car can signal its approach long before you see it, which gives your brain time to prepare for the awesomeness it’s about to witness as the sleek Nissan heaves into view.

“I decided to go with the minimum of tuning, to keep the car as original as possible,” Rafal says, but don’t go thinking we’ve gone all straight-down-the-line classic-car-mag on you. The attention to detail and the subtle tweaks to this Z31 make it a totally credible force on the modern stance scene. It’s been winning awards at shows and rightly so. You don’t always need to throw everything at a car to make it shine – sometimes, just sometimes, less really is more.

Thanks:
A special thank you to Pietruszka Performance and Zygmunt Lipok.