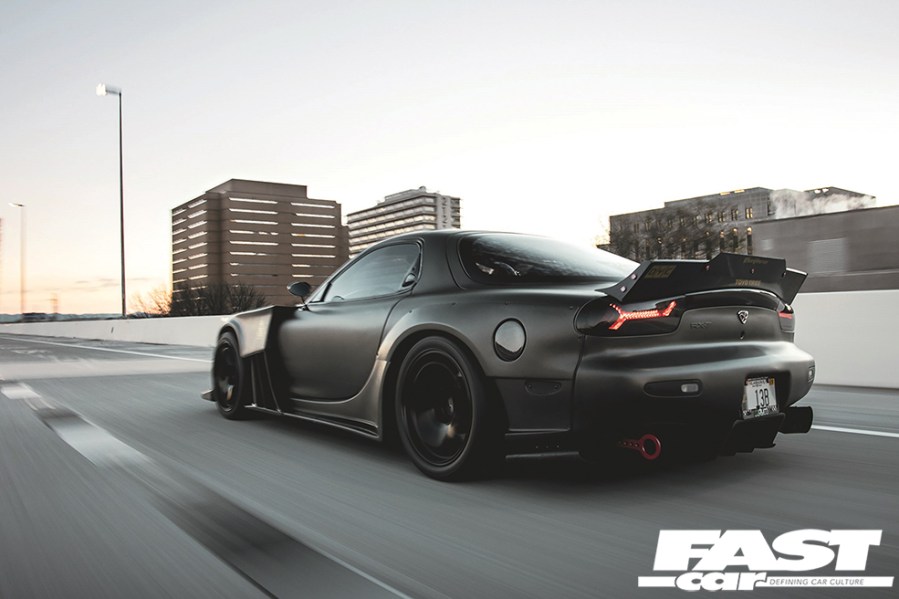 Very few cool stories begin with Malibu. As was adroitly pointed out by Gary in ‘Men Behaving Badly’ back in the nineties, there’s a strict social code that forbids ordering Malibu in pubs; sure, its easy-going coconut flavour makes mixing a piña colada a bit simpler, but it’s really just watered-down rum for people who don’t actually like rum.

That’s the UK perspective, anyway. Over in the USA, the term represents something different. If you live in California, Malibu is a beach city in western Los Angeles where dreams are made by beautiful people, the sun always shines and you’re forever tripping over palm trees and wedges of discarded banknotes. More than a few cool stories have started with that Malibu. Elsewhere in the USA, though? The name refers to one of the less inspiring models to be produced by the General Motors corporation: by the time it had reached its fourth-generation in 1978, the Chevrolet Malibu had grown into a square-jawed box, most notable for its use on police fleets (and, bizarrely, in a special production run brokered by Saddam Hussein to work as taxis in Iraq). Is this the stuff dreams are made of? Possibly not. But there is one distinctly cool story that began with exactly this starting point, and the endgame is spread out before you on these pages. You see, Phil Sohn, world-renowned Wankel authority and dyed-in-the-wool RX-7 aficionado, started his automotive adventures in a ’78 Malibu. And it certainly doesn’t seem to have done his motoring passions any harm. 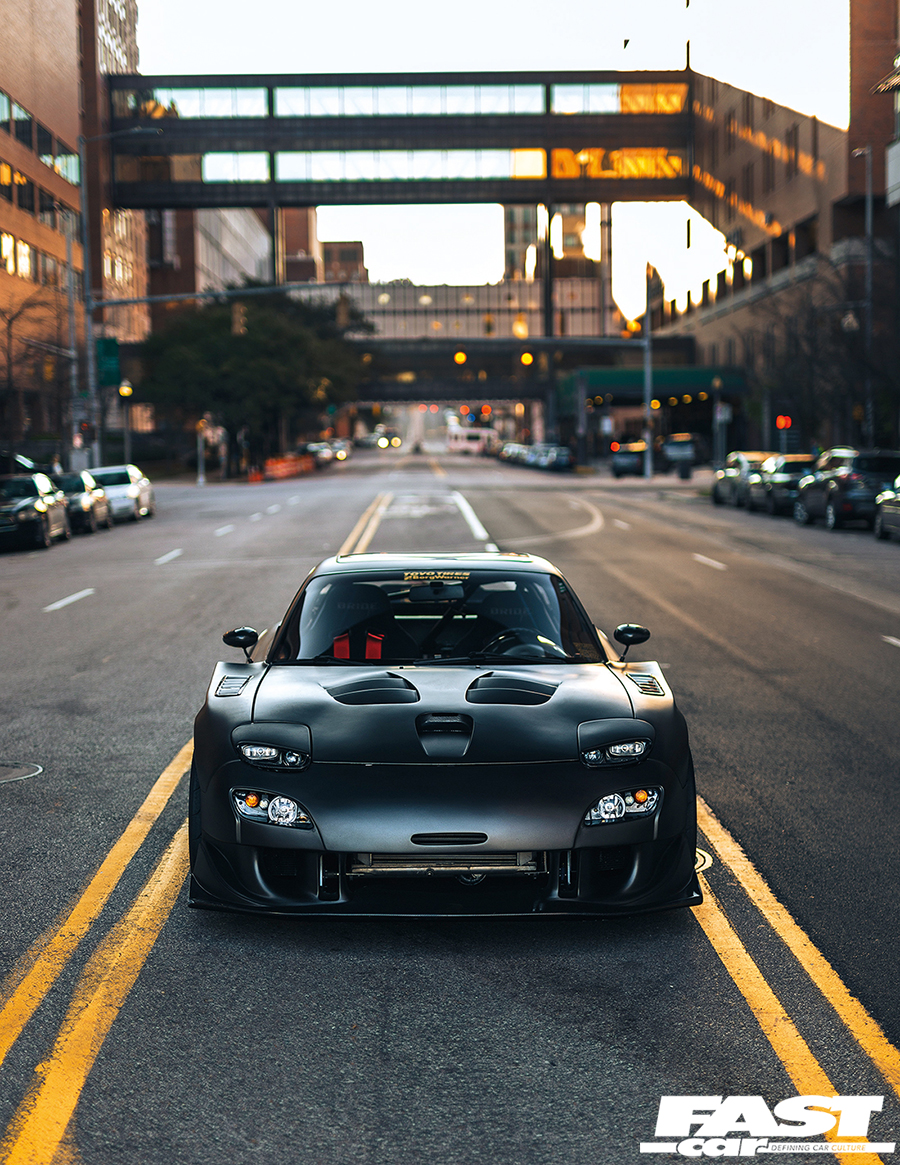 “I’ve been modifying cars since the late-eighties, starting out with stereo stuff,” he explains. “In the mid-’90s I bought my first RX-7, a 1991 FC convertible, and at the end of the ’90s I got my first FD.”

It’s fair to say that Phil has become something of an expert over the last couple of decades or so, having spent an incredible amount of time tearing down RX-7s and rebuilding them to be harder, better, faster, stronger; what he doesn’t know about these offbeat rotary tearaways isn’t worth knowing. The car you see here was the fifth FD RX-7 he’d acquired and modified (at the time – the tally today is more like fifteen), and it’s been through a remarkable number of evolutions in the time he’s had it.

“I bought this car from a friend back in 2003, who’d just got a new RX-8 and needed to sell the RX-7 because he couldn’t use it with the family,” Phil continues. “It was in amazing condition with all new ’99+ body parts on it. Back then, only a handful of RX-7 owners had these OEM ’99+ updates.” Having been a serial FD perv since 1999, there’s a certain neatness to the idea of acquiring cars with the rare and sought-after ’99-spec bits, and it was clear from the start that this one was to be a keeper. 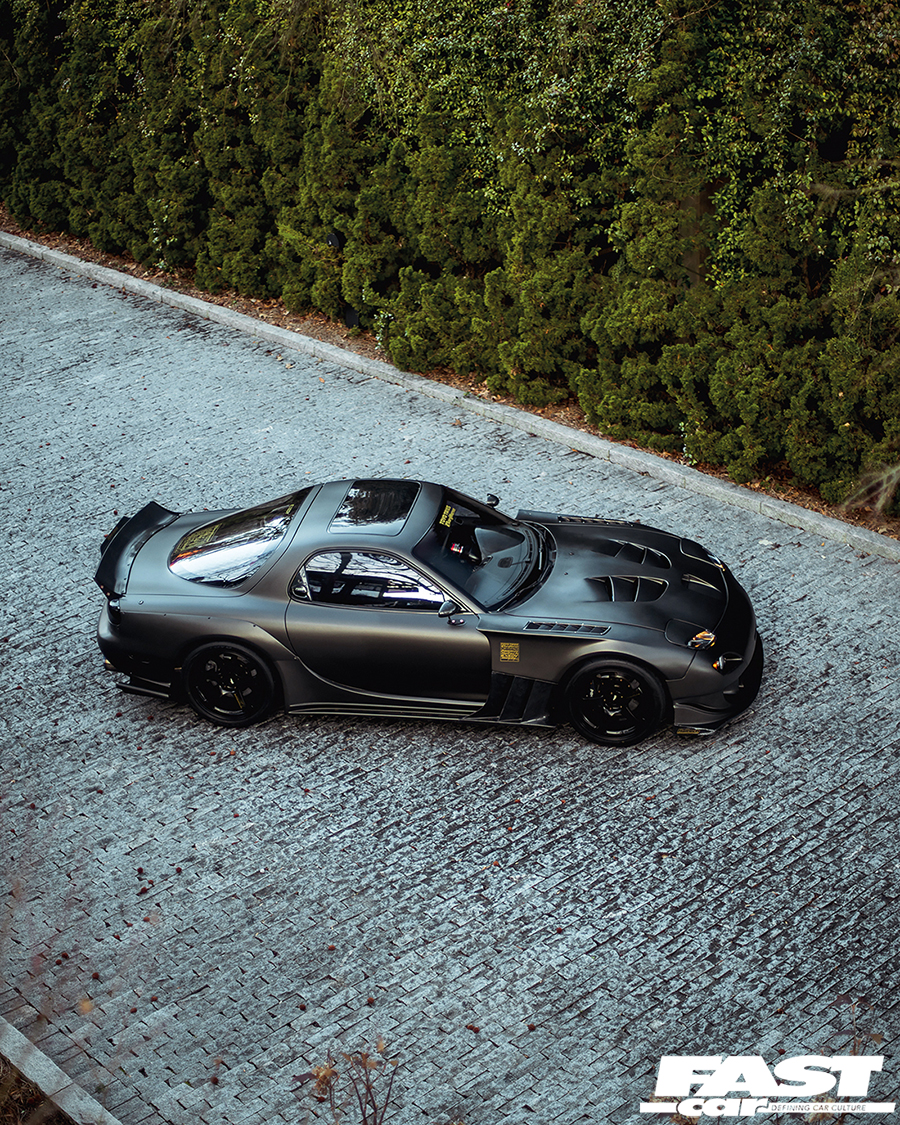 “This modified FD RX-7 has seen multiple changes over the years, and multiple features with all the different evolutions,” he says. “I’ve done most of the work myself, and it’s always been the same chassis underpinning it – although you mightn’t believe it when you see how much it’s changed each time.”

Corralling a strong arsenal of sponsors and associates has helped the project to grow and flourish, with Phil building up close relationships with a variety of aftermarket kingpins over his lengthy and diverse endeavours. Key figures within the process this time around included BorgWarner, Radium Engineering, Built 2 Apex, ID, FFE, Haltech, Davies Craig, SakeBomb Garage, Samco UK, Defi, Exedy, Liqui Moly, Tein, Bride, Powerflex, Toyo… it’s a rich and tasty list, and the results of all these high-quality ingredients are self-evident in today’s spec. 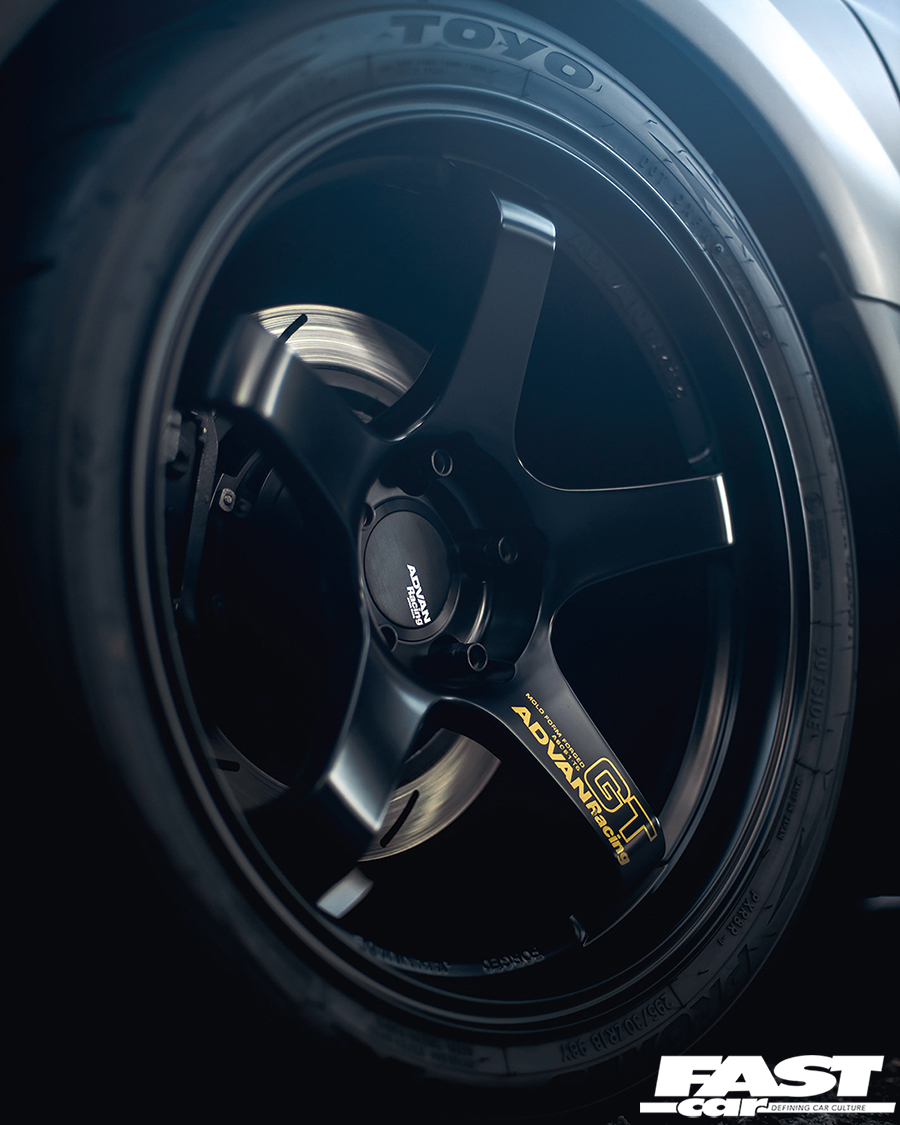 “The engine was built by me and Brian Treffeisen, a long-time friend and tuner,” says Phil. “Brian will be tuning the car, and we’re expecting to see around 450whp.” This is attributable in part to the fact that the revered 13B-REW has been converted to run a single turbo – a BorgWarner EFR8374, a ceramic ball-bearing unit designed specifically to support power in the 400-800bhp range while also offering rapid spooling at motorsport level – but of course it’s rather more involved than just that. Phil’s worked closely with Radium Engineering to develop the perfect fuelling system, which features their proprietary drop-in multi-pump surge tank, two Walbro E85 pumps and a lift pump, remote fuel filter kit, and Full Function Engineering primary and secondary fuel rails with ID 1300 and 1700 injectors. SakeBomb Garage perfected the water/meth injection setup as well as providing the coils, dual oil coolers and various other tricks. The FMIC is an A’PEXi GT item, the hoses are all Samco from right here in the UK, and all of the myriad modifications are bossed into order by a Haltech Elite 1500 ECU with dual EGT sensors and mil-spec wiring harness. When it comes to 13B motors, this is all just about as clever as it gets – a supremely high-end build designed for devastating performance with impeccable reliability. After so many years reimagining these cars, Phil knows exactly what he’s playing at here. And don’t make any smarmy jokes about rotor seals, he’ll throw a spanner at you. 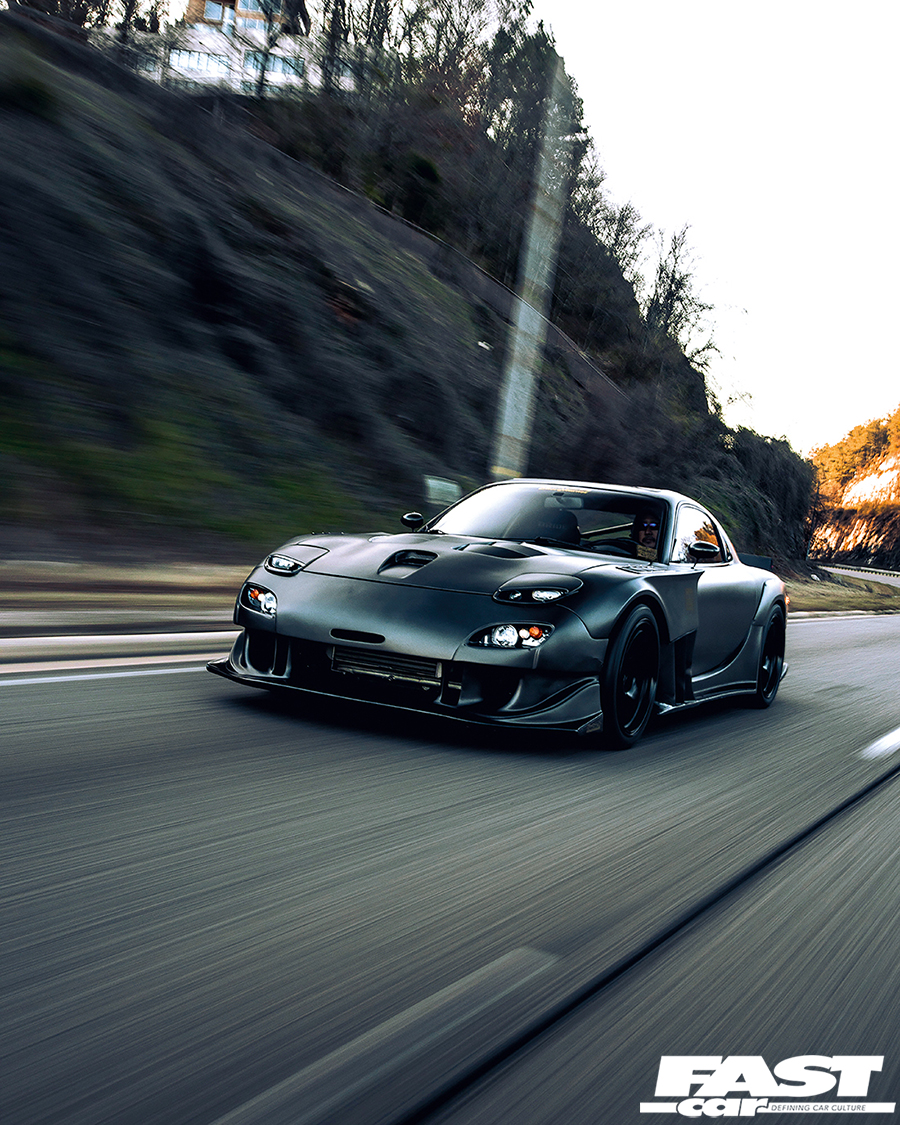 In order to deploy all of this cartoonish thrust, the chassis has been down to the gym and very diligently doing its daily Joe Wicks workouts; we’re talking Tein Flex Z coilovers with the supremely clever EDFC Active Pro damping force adjustment, backed up by Powerflex Black Series bushes throughout, SakeBomb billet solid anti-roll bar mounts and adjustable ARBs at either end. The brakes are pretty bloody devastating too, with the front end wearing SakeBomb’s own take on the Wilwood BBK, and a ’99-spec rear upgrade from Racing Brake.

Form is just as important as function with this project, that’s always been at the core of Phil’s modding sensibilities – although you’d probably already gathered that from the quality of the car’s presentation. The interior is flawlessly detailed, with the uber-fancy Bride seats surrounded by neat hex carbon that makes it look like the cockpit of a fighter jet. And outside? Phil’s exacting standards have seen some seriously clever custom features come to fruition. 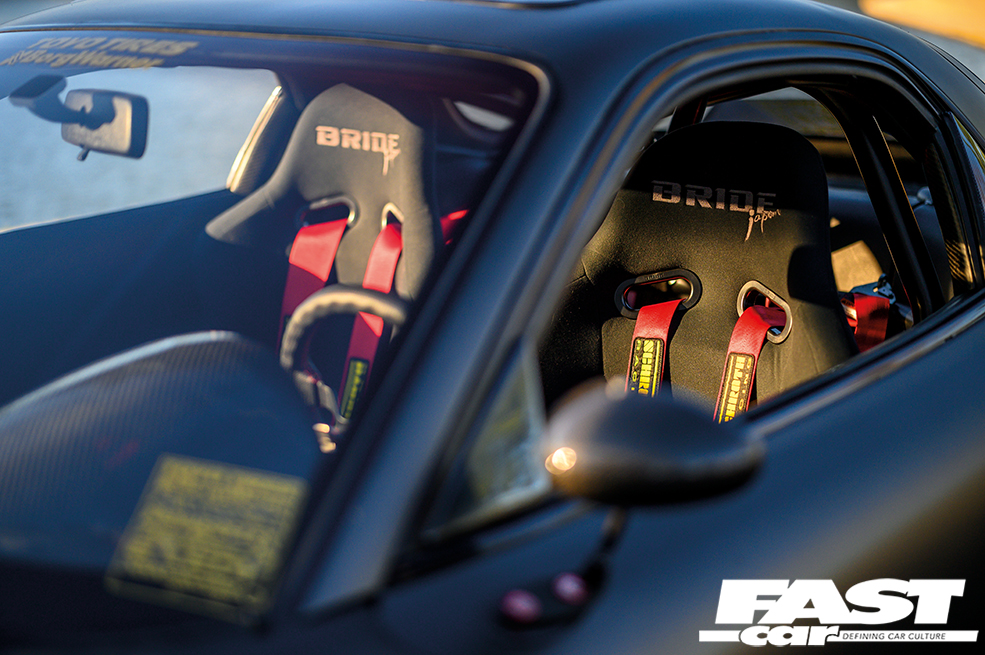 “The front bumper is my own creation,” he explains. “It’s a combination of the RE-Amemiya N1-05 design and the FEED Type 2R, which are my favourite aftermarket options for the FD; I’ve taken the best elements of both and blended them together, along with some custom carbon accents. I produced a mould while I was making it and made five more bumpers.” Always useful to have spares, although perhaps these jewel-like creations could provide unicorn-grade additions to hardcore FD builds across the US or beyond. The rest of the RX-7’s exterior bristles with cool upgrades, from the TCP Magic G-FACE GT front wings and FEED rear flares to the APR wing-top vents, Scoot bonnet and RE-Amemiya carbon rear splitter. The cherry on the cake is the colour, which has actually been plasti-dipped – this is something that was massive on the scene a couple of years ago but seems to have largely receded back into the shadows; here Phil’s demonstrating that it’s still a very versatile idea, and his chosen colour – amusingly named ‘Motor Oil’ – is absolutely spot-on for this super-aggressive Mazda. 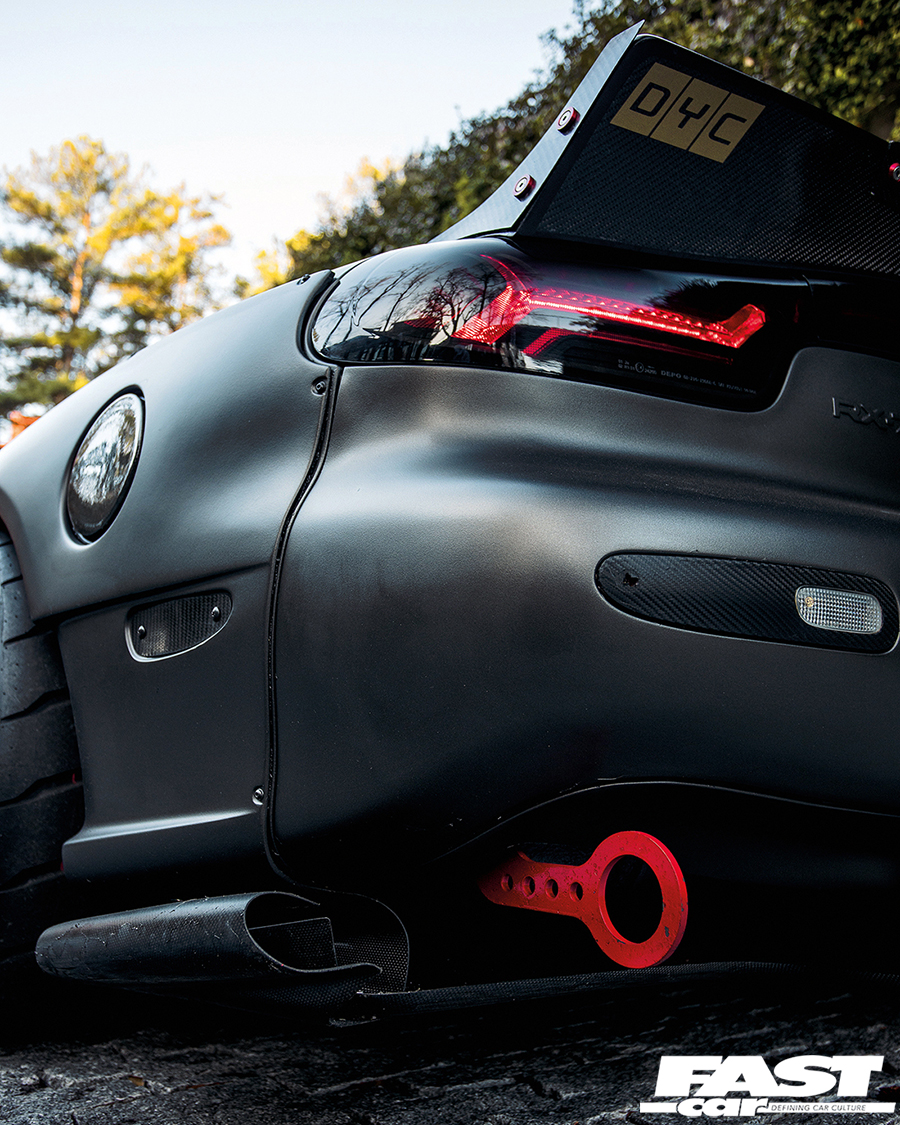 “I’ve done pretty much everything with this car,” says Phil, with a wistful smile. “Long-distance trips, touge runs, shows, track days, you name it. This FD is particularly special in that I took my wife on our second date in it, and raced a 911 on the road – with her permission! It’s also my longest-owned FD RX-7 and I’ve changed everything on it… and when I say everything, I mean that literally; right down to each individual wire, every single element has been changed since 2003.”

As tales of automotive obsession go, it’s a compelling one. This isn’t just a project car, it’s a companion. It’s been with him through thick and thin, he knows every millimetre of it, and with each evolution it keeps getting faster and more exciting. Who says cool stories can’t begin with Malibu? 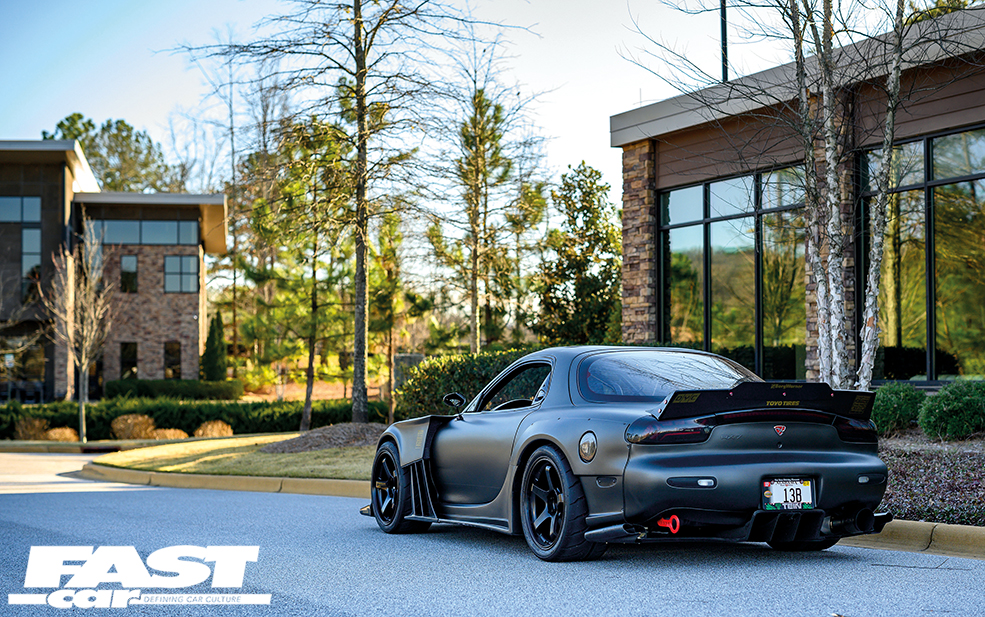