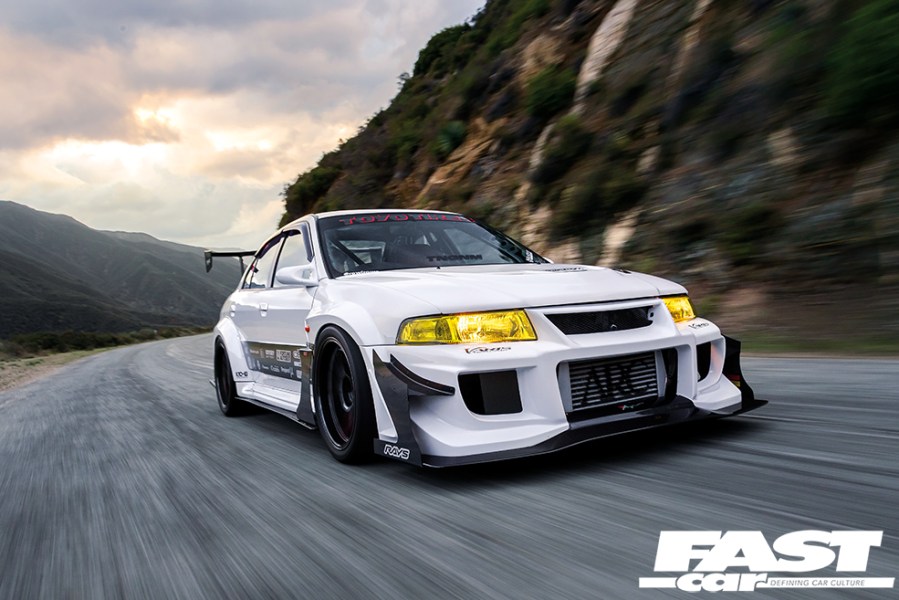 As a member of exclusive Lancer owners’ club, Team Emperor Motorsports, Rowie Landicho has dressed his imported modified Evo V in the most exclusive of Japanese parts, creating a JDM machine that reigns supreme.

When it comes to finding inspiration for your project build, there are few better places to look than motorsport. Whether it’s the lurid team liveries or the functional lap-time reducing aero parts, there’s always going to be something you can take from a race car and apply to your own modified ride, albeit often with a watered-down twist. The other great thing about aping a thoroughbred racer is the sheer diversity of classes, series and machines that you can draw from. Right from the Formula 1 elite to grassroots drifters, there’s just something endlessly cool about racing cars. One man who is no stranger to the allure of circuit-shredding-chic is Los Angeles-based JDM fanatic Rowie Landicho.

“For me, it’s always been the Super GT series in Japan that has got my juices flowing,” grins the 28-year-old sales and marketing specialist. “The cars are all based on models you can buy for the street, including JDM legends such as R35 Nissan GT-Rs, Honda NSXs and Toyota Supras, but there’s also true supercar exotica like McLaren F1s, Lamborghini Murcielagos and Ferrari 458 Italias, but with much more extreme engine tuning and wild aero packages.” 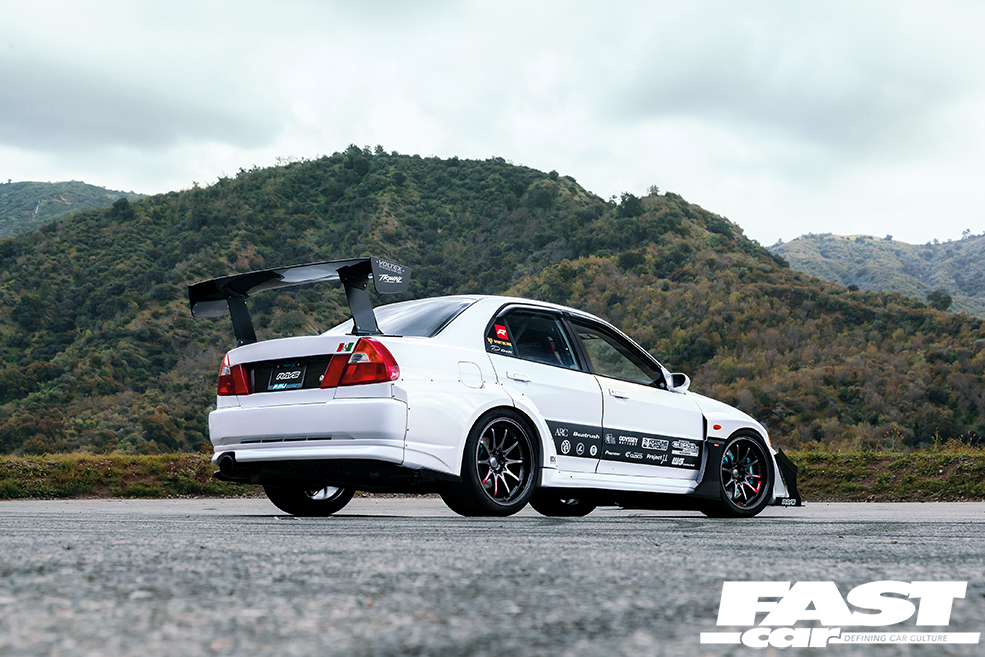 And it was by fusing his love of Mitsubishi’s mega-saloon and the unhinged downforce generating bodylines of his favourite Super GT contenders that resulted in his latest eye-popping Lancer build – the wide-arched fifth generation Evo on these pages.

“As a loyal member of the Cali-based Lancer owners’ club Team Emperor Motorsports, I’ve had Evos for a while now, my first being a tenth generation model that I modified extensively with rare Japanese parts,” Rowie explains. “That car was displayed at SEMA and also won the coveted ‘Judges Choice’ award at the Mitsubishi Owners Day event in 2015. It was a cool car, but eventually I decided to move on and start another project.” 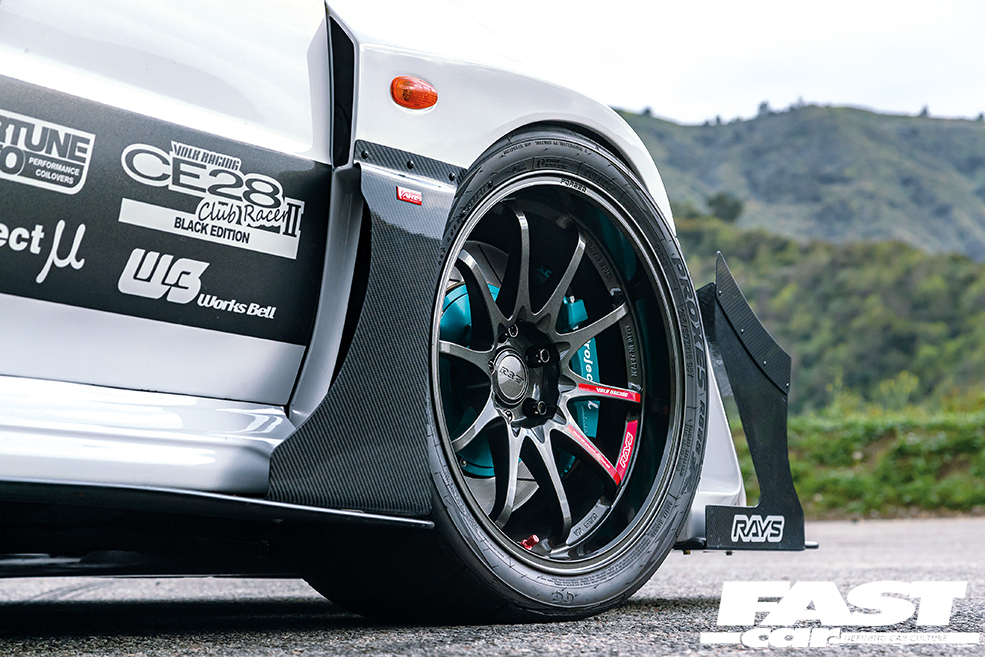 Being a diehard Lancer nut, Rowie knew his next steed would come with the iconic Evolution badge, but his initial thought was to step back a couple of models and go for either an eighth or ninth generation car, but then an opportunity arose that he simply couldn’t refuse…

“Back in November 2017 I had the chance to acquire an Evo V,” he recalls with a grin. “I say acquired, because I didn’t actually pay for it – I did a trade with the owner for a bunch of rare ARC Evo X tuning parts and a host of uprated suspension mods that I removed from my old build. He had recently purchased a Final Edition Evo X and just didn’t have the time to work on the V as well, so he was keen to do the deal.”

As you can imagine, for the price of a few parts, the Evo that Rowie ended up with was a far cry from the immaculate street and circuit slayer that it is today. 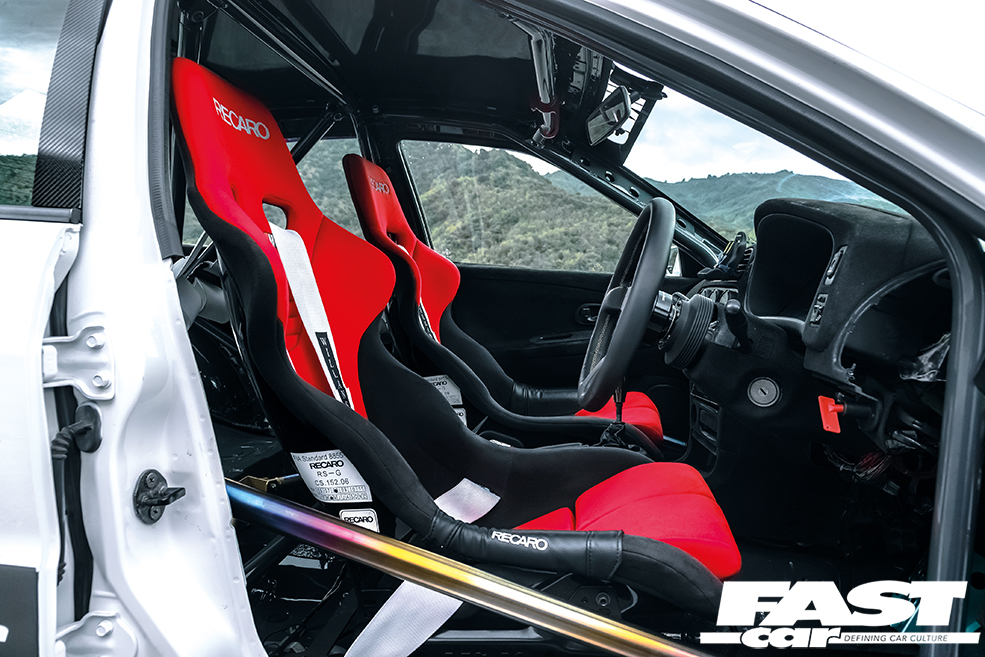 “It had been sitting in a garage gathering dust and cobwebs for around five years,” he laughs. “In fact, when I first saw the car, it was under a tonne of random garage junk. Let’s just say it wasn’t exactly a cherished collectable, that’s for sure! But even so, I immediately saw potential in it, so had to snap it up.”

As a Japanese import, the Evo is right hand drive, which for a JDM fan in the US is popular option as it retains the authenticity of the original car as it came from the motherland. However, it does pose a challenge to drive on the street, as the USA is a left hand drive country, so you are effectively driving on the wrong side of the car, although the kudos gained in hardcore JDM circles is often a worthy trade-off. But before Rowie could experience any of the thrills from behind the wheel, he had some serious work to do.

Having not run for more than half a decade, the Mitsubishi had a host of electrical gremlins that needed sorting before Rowie could begin the car’s transformation, so he took the ailing Evo to tuning specialist KT Motoring to diagnose the problems and get the engine firing on all cylinders. 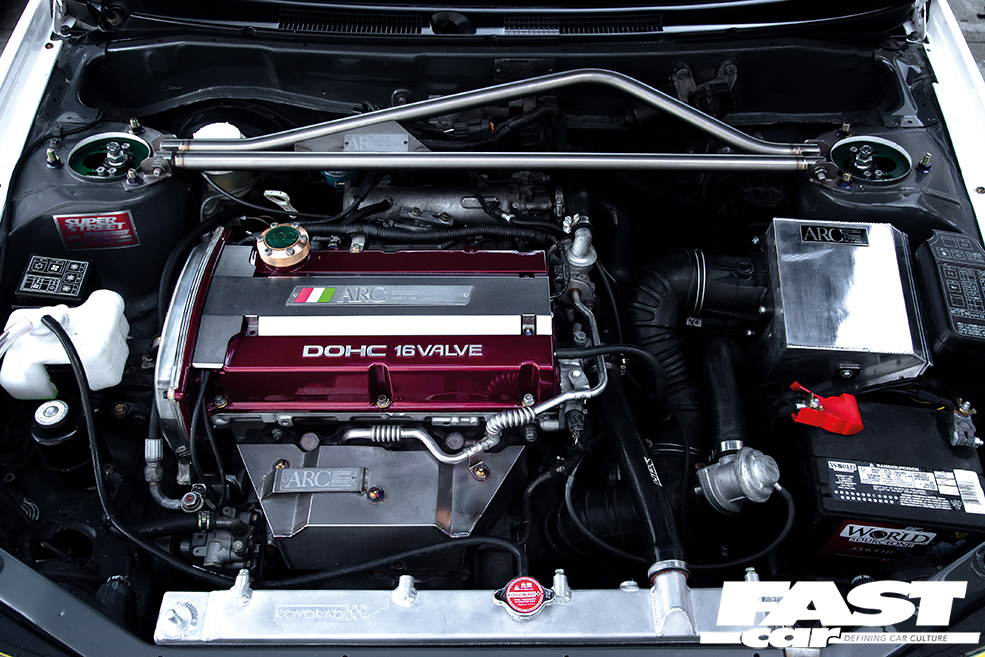 “Once the 4G63 was up and running again it was delivered to Dennis at Denz Mechanical to go full steam ahead with the restoration of the corroded bodywork,” says Rowie. “We started by dropping the now healthy motor and painting the refreshed engine bay in OE Mitsubishi Medium Grey, which was a colour that would later feature throughout the interior and rollcage.”

The ‘cage itself is a Cusco 13-point item with custom Enticed Motorsports pillar gussets and gorgeous Chasing J’s titanium door bars. Combined with the flocked dash, Beatrush rear seat delete and carbon parcel shelf it really adds an authentic motorsport feel to the cabin. The other items that channel the Evo’s inner racecar are the uber rare Ralliart Recaro RS-G bucket seats. 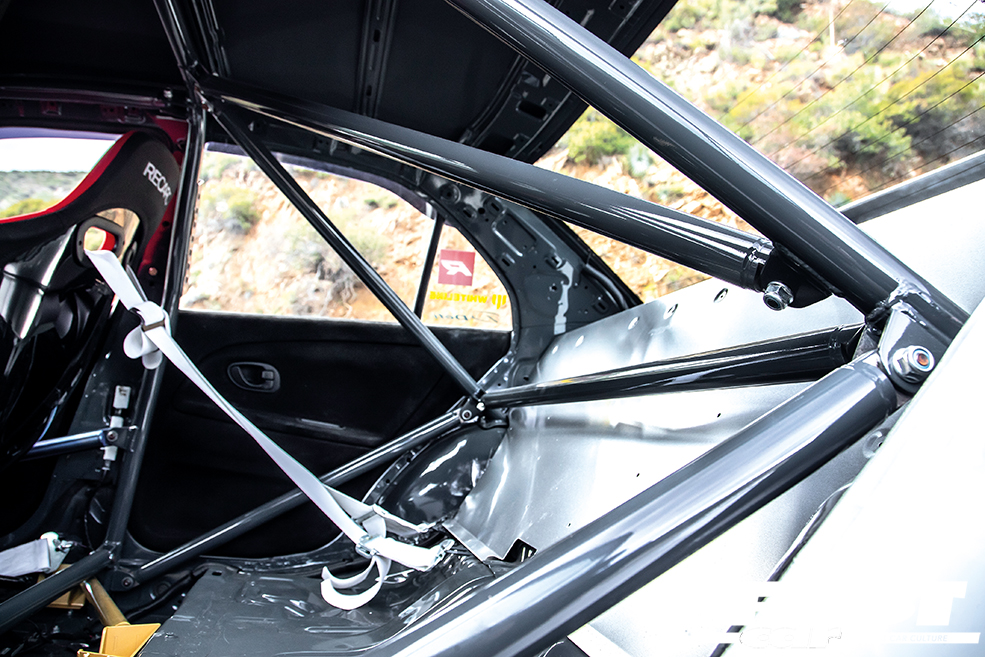 “I’m a sucker for rare and discontinued parts,” laughs Rowie. “My favourite mod is the seats, which I believe is the only set in the US. In fact, if I ever decide to sell the car, I’d definitely remove them and save them for my next Mitsubishi project.”

And while the seats may be the pinnacle of the Evo’s rare parts list, they are by no means the only ones, and are merely the tip of the JDM iceberg…

“I’ve always prided myself on using only the best JDM parts and, throughout the build, I was able to source some of the rarest parts available for the CP9A chassis, such as an ARC titanium strut bar, ARC intake box, ARC oil cap, ARC spark plug cover, ARC heat shield, ARC front-mount intercooler and titanium cat-back exhaust and an ARC shift knob,” Rowie highlights, pointing out the jewels in the Evo’s crown. 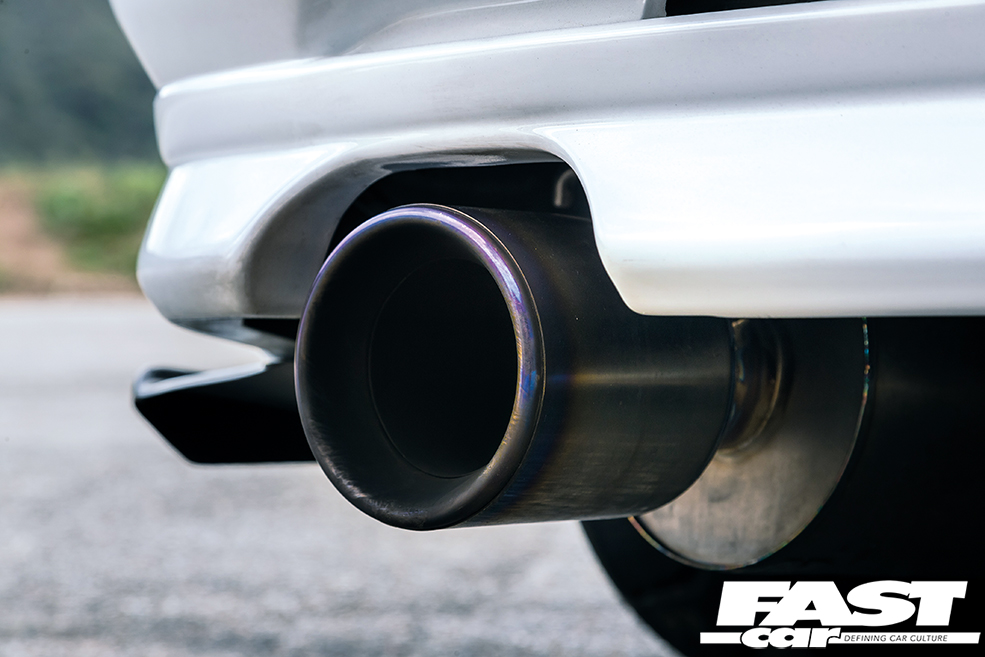 But aside from the copious amounts of hard to come by under-bonnet bling, the thing that makes Rowie’s modified Evo V stand out so effectively is the body kit.

“Since I first got the car, I’d always planned to fit it with the Varis ASSO wide body kit,” Rowie remembers. “It’s by far the most aggressive kit available for the V and has similar styling to the Super GT racecars.”

The kit is a limited production item and was sourced as a special order from Japan by Jonny Grunwald at TCP Magic USA and was an essential ingredient in ensuring the Evo was accepted to be part of the exclusive 2019 Toyo Treadpass arena at the 2019 SEMA show.

“Getting accepted to display at SEMA was a real honour, but meant we now had a tight deadline to work to in order to get the car finished and ready of the show,” Rowie says. “So while Dennis got busy with fitting the kit and painting the exterior in OE Lexus Super White, I began installing the ever-growing pile of bolt-on mods that was slowly stacking up in the corner of the workshop.” 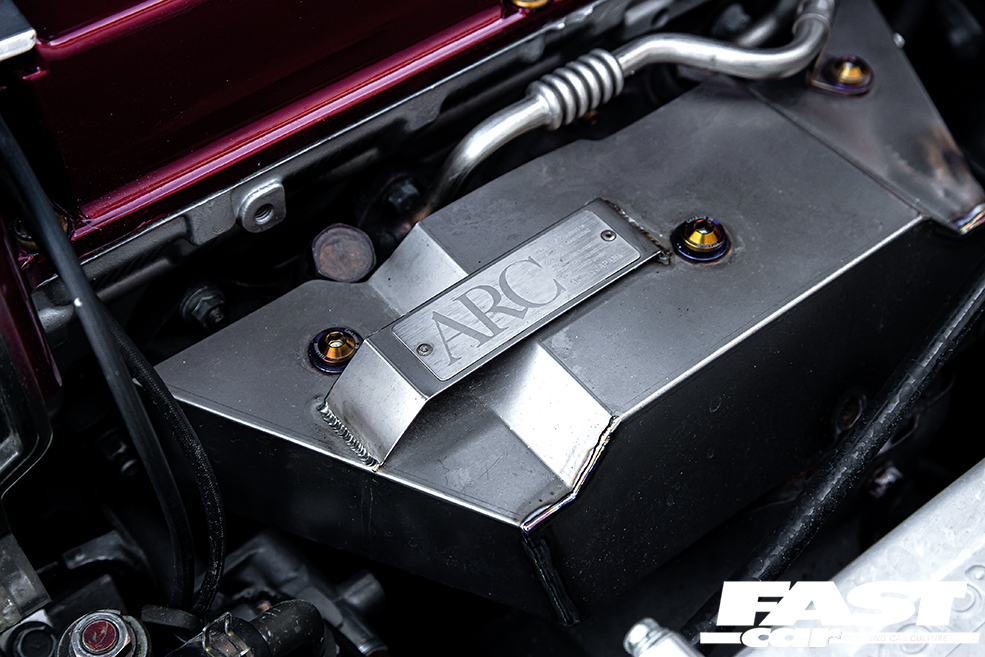 As well as the host of rare ARC parts, the engine got a thorough working over with an uprated CTR-X650 Comp turbo, HKS camshafts and cam gears, a set of ID1000 fuel injectors fed by a Walbro fuel pump and a remap for potent E85 fuel. The result is a conservative but super responsive 380bhp and 360lb ft of torque.

To tame this beefier powerplant Rowie wisely opted for a Project Mu big brake kit at the front and uprated Project Mu discs and pads at the rear. Working alongside a set of similarly branded braided hoses they ensure the Evo has ample stopping power for either road or track – something that Rowie is keen to experience in the near future. 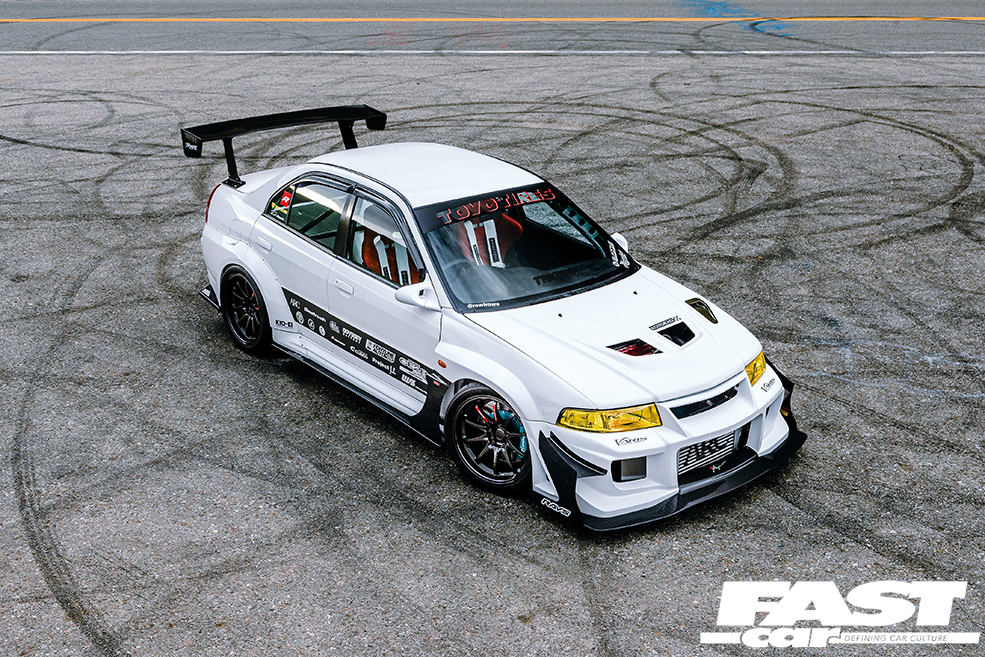 “Many of the cars built for SEMA end up being pampered show ponies,” Rowie laughs. “And it would be very easy to follow suit and wrap the Evo in cotton wool now it’s complete, but I’ve built it with driving in mind and I’m itching to try it out on the track.”

Which is why he has forgone the usual show car route of airbags for a more traditional track set-up for the suspension including Fortune Auto 500 Series coilovers, Whiteline anti-roll bars and polyurethane bushes.

“The suspension set up, combined with the functional aero of the bodykit and the huge Voltex wing, should make the Evo a real weapon on track,” Rowie beams. “It’s been a privilege to have another car on show at SEMA, but for me cars are meant to be driven, so that’s exactly what I plan to do.” And who could blame him? If we had an awesome track-tuned Evo, dressed in the finest parts that the Far East has to offer, we’d be doing the same. 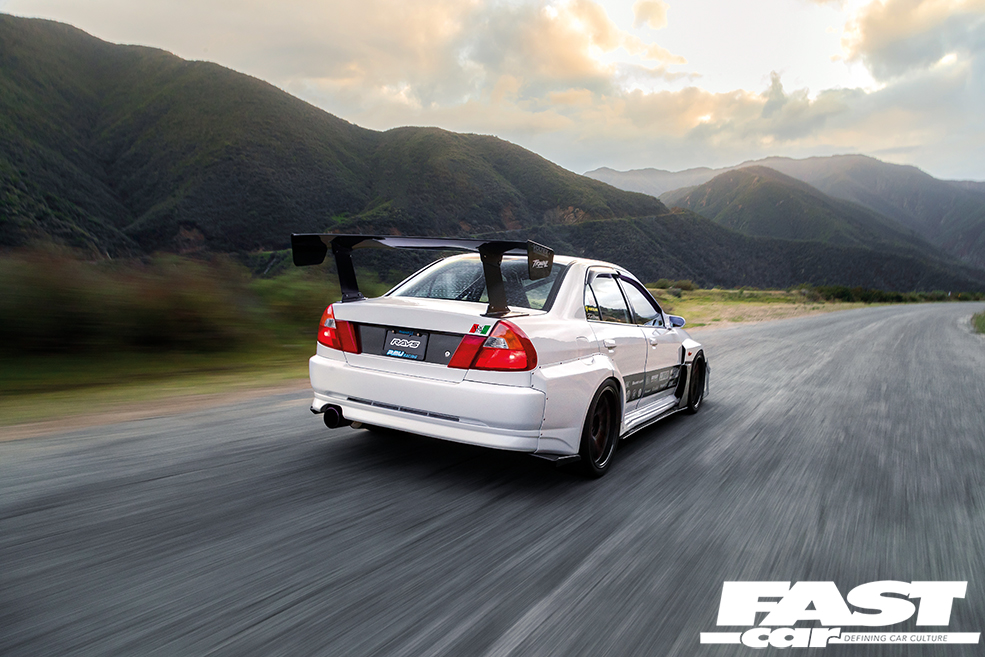