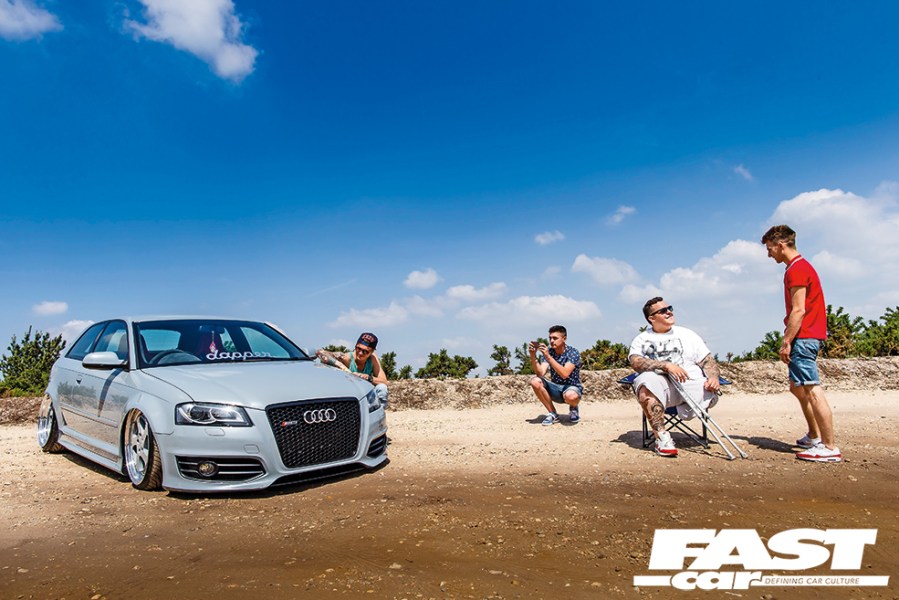 Welcome to this week’s FC Throwback, where we take a look back at some of our favourite previous feature cars. This week it’s Jason Allen’s modified Audi A3 from 2014… 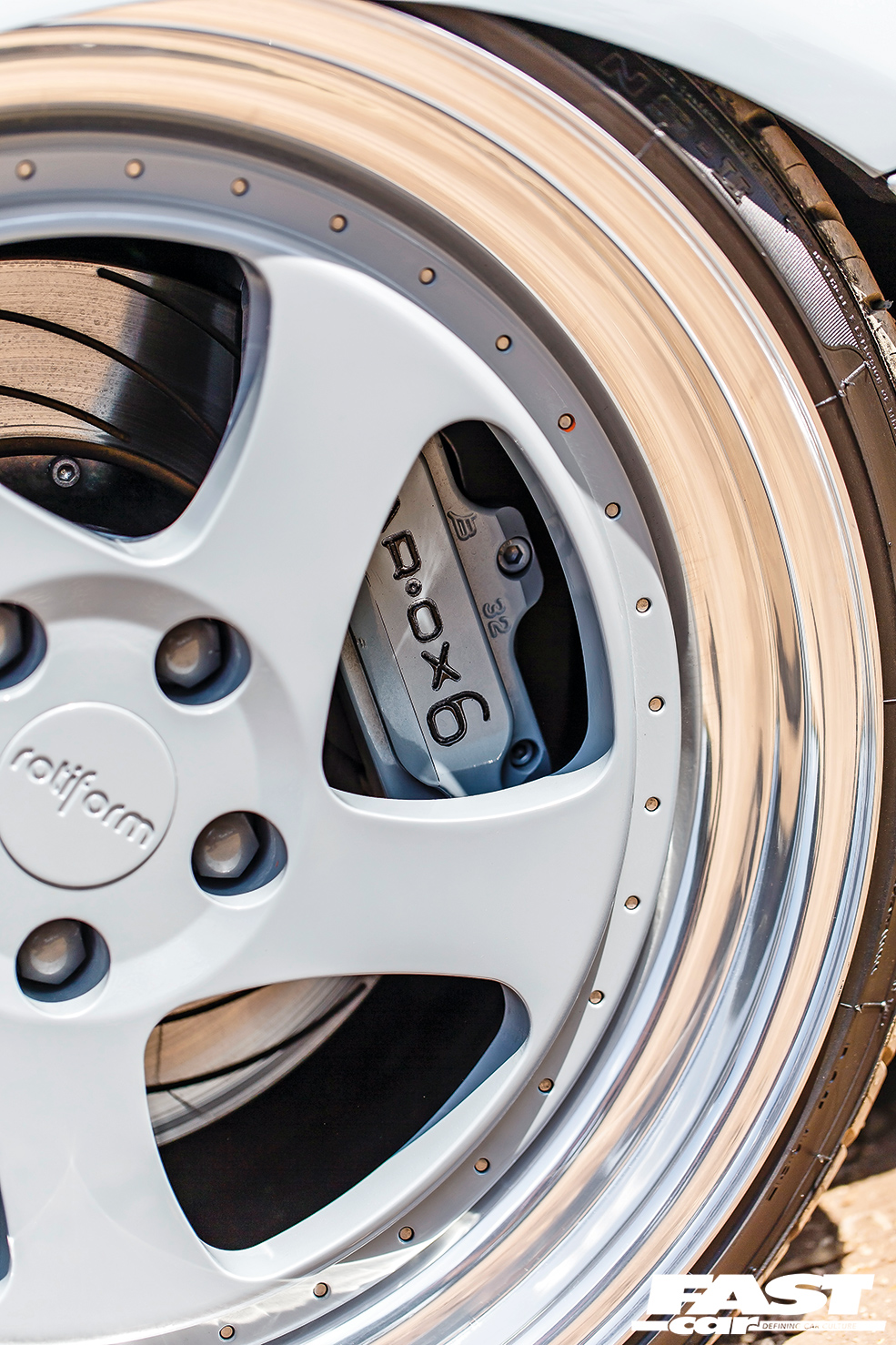 The term wheel whore used to describe someone who has a severe addiction to hoarding, buying, selling or swapping seriously awesome hoopage. Attracted to shiny round-shaped objects, sometimes in a sexual manner. Based on this, we can safely say that our mate Jason Allen is the king of the wheel whores, and lord of the stance! 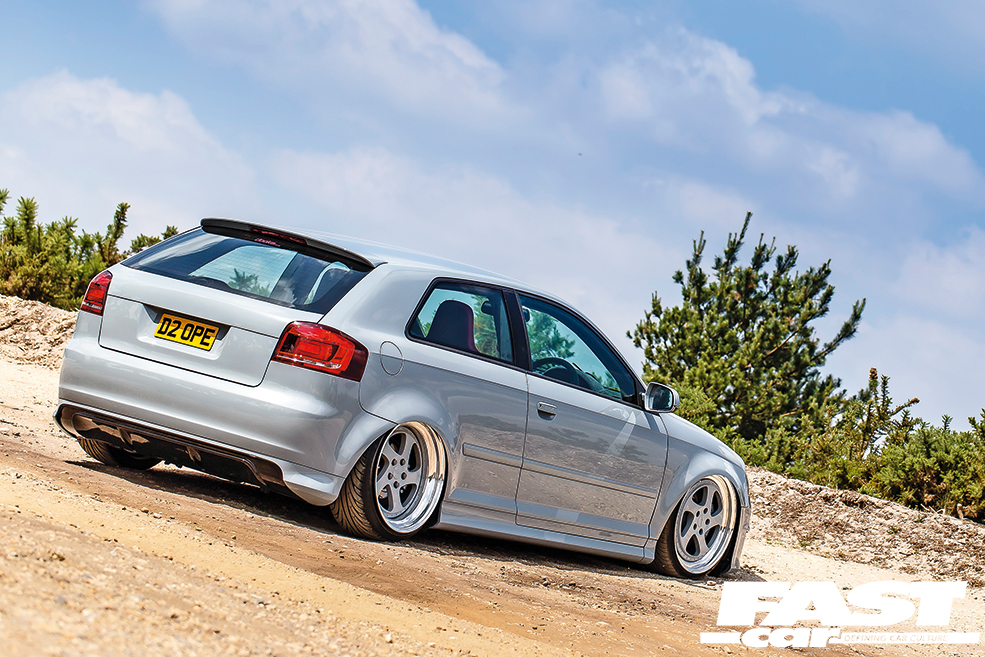 He’s not shy about showing off his motor either. This modified A3 swaggers around the show scene like a dirty little slut-hoe for all to see! This isn’t the first time we’ve had a go on the Audi. Not so long ago it was featured with its black coat and pink Rotiform TMB rims, now it’s back for seconds! 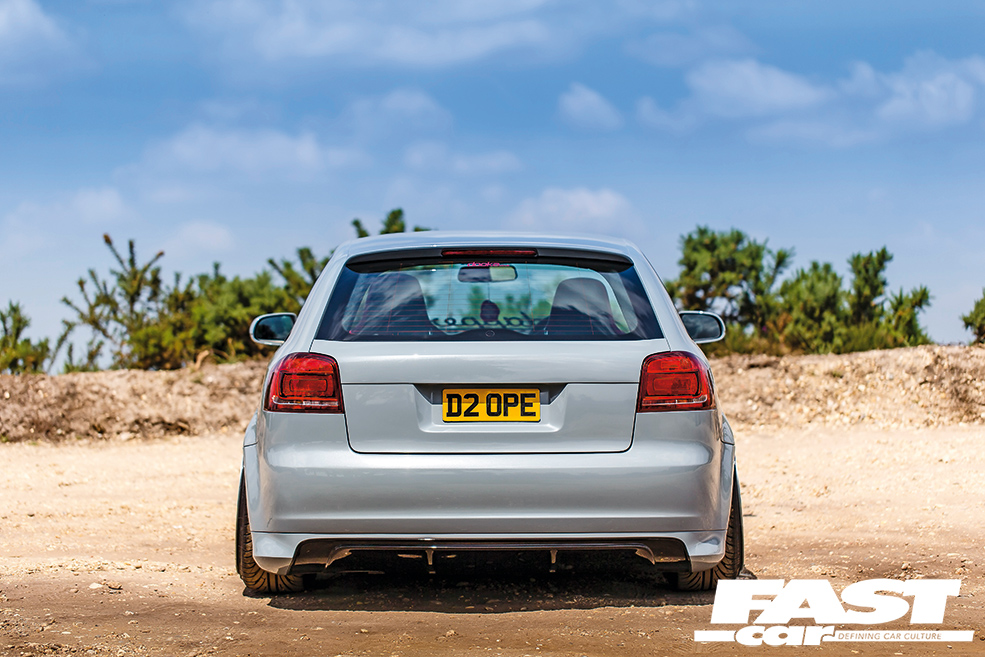 Jason had the Audi back down with the lads at Reflex before our snapper even had chance to pack away his camera. Mr Allen isn’t one to do things by halves either, it was all or nothing for this modified Audi A3! The standard bumpers were taken off and replaced with Audi S3 parts, but not before a touch of smoothing. To complete the kit, they added a set of skirts and an RS3 front grille. 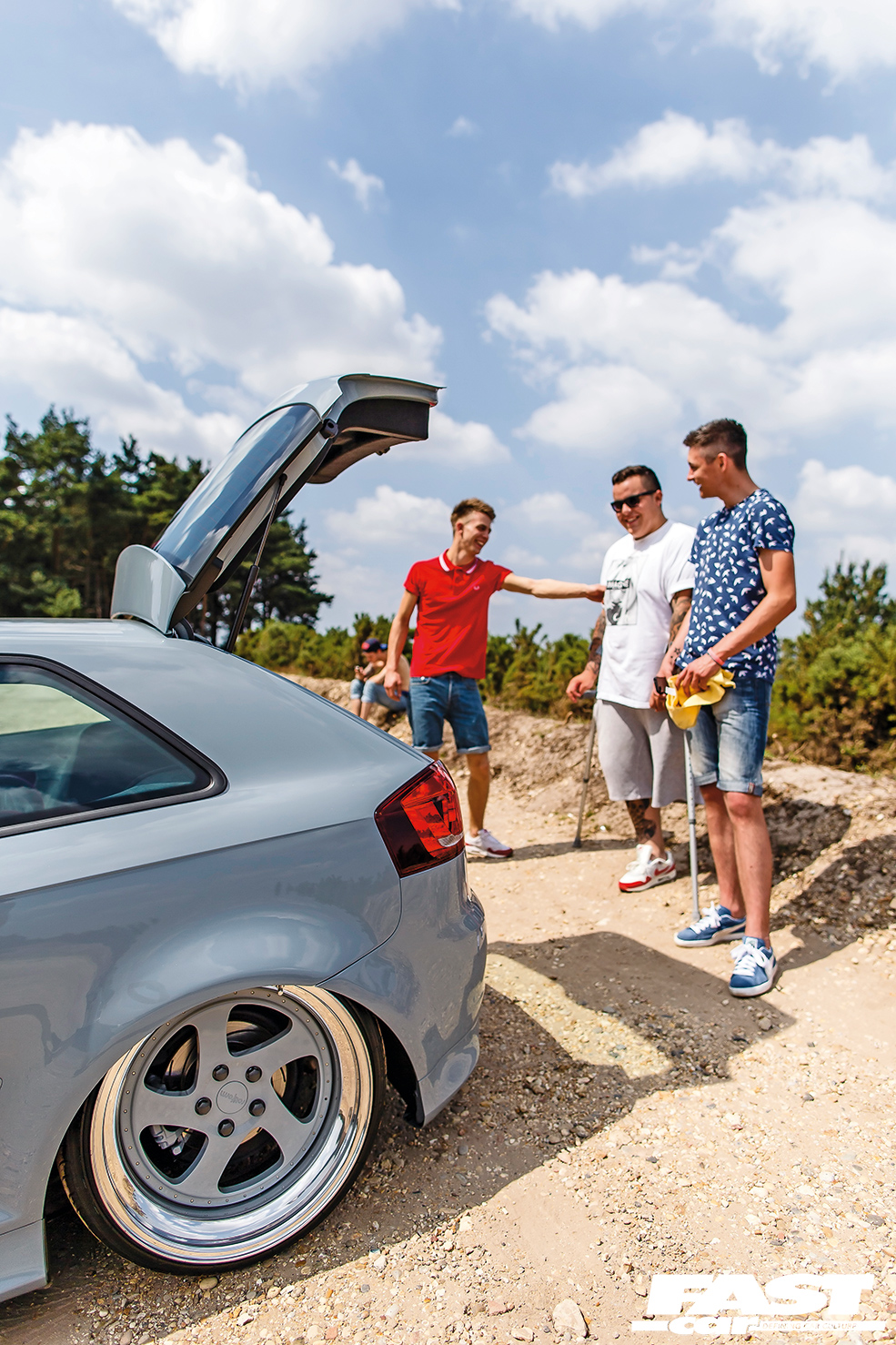 With plans to fit an even wider set of rims, the front and rear arches have both been flared out. The real transformation came by way of a complete colour change to grey. “I’ve always been a fan of grey cars and I wanted something similar to Abarth grey that Matt at Reflex has on his Lupo, it went from there,” Jason tells us. 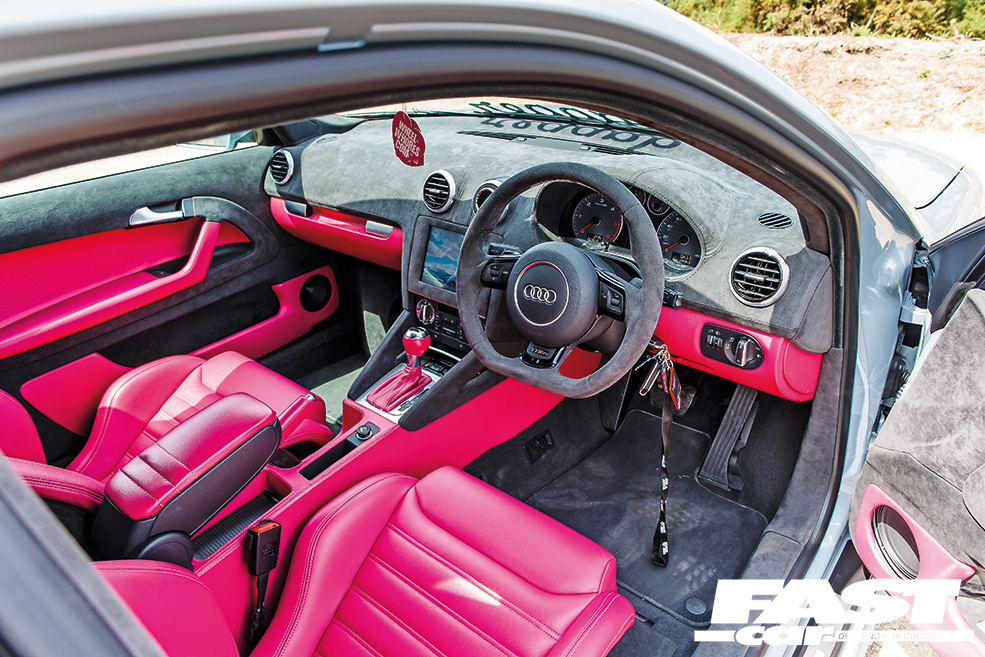 Filling out those flared arches are a set of staggered 9x19in and 9x10in Rotiform Race TMBs with plenty of dish! These are the 14th set of wheels to grace the Audi and when you consider he’s only owned it for two years, that’s pretty impressive whoring! 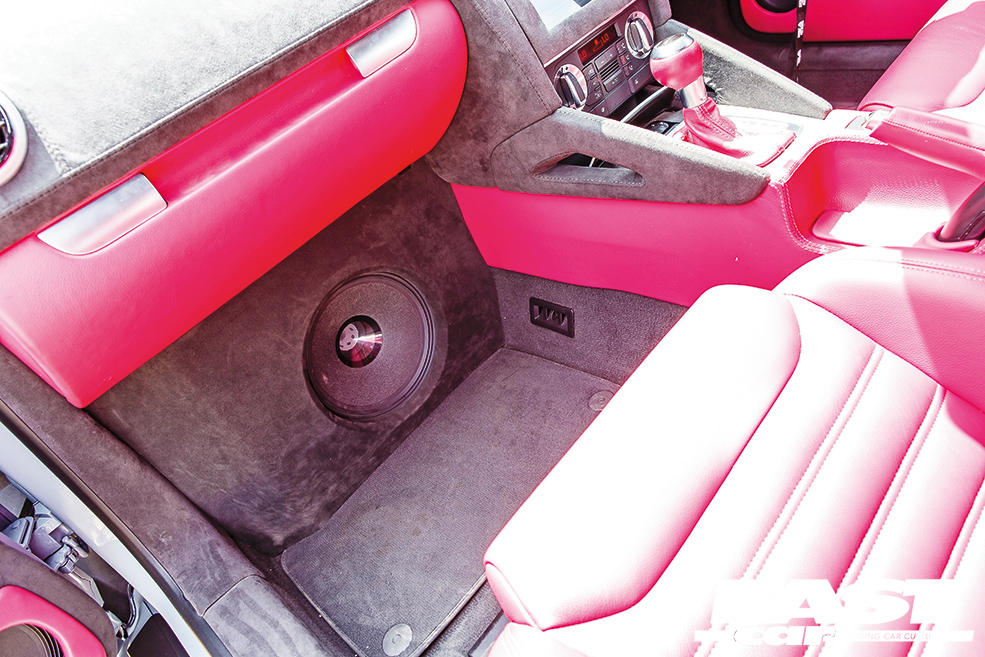 It doesn’t stop at an exterior overhaul either! Luke at Plush has once again worked the shit out of that needle and thread to create one of the most beautiful interiors we’ve ever seen! Up front sit a pair of Recaro CS Sportster seats finished in bright pink with matching door cards, gear gaitor and centre console. 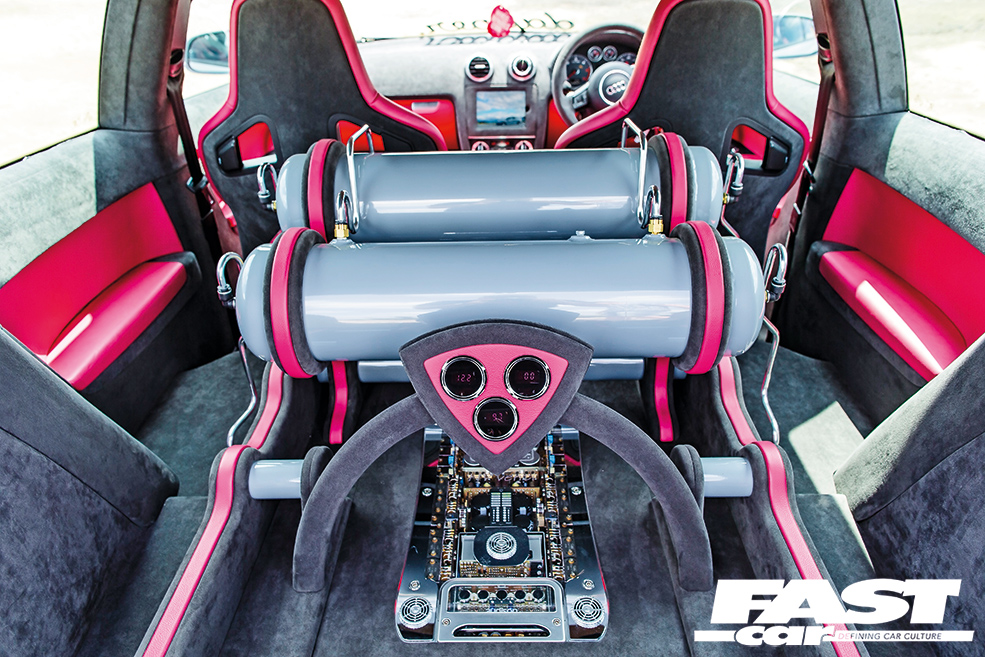 The real change is in the back though. The rear seats have made way for a killer install! A pair of five-gallon air tanks have been mounted on custom frames just behind the front seats. Feeding the tanks are a collection stainless steel hard lines that add even more detail to the build. Beneath the air tanks sits a top-of-the range Audison Thesis amp that’s been sunk into the false floor. The install continues on right up to the boot with an Audison bit-one processor and iPad mounted onto more framework, perfect for Jason’s regular Facebook updates! The whole lot sits on a bed of black Alcantara. Smashing. 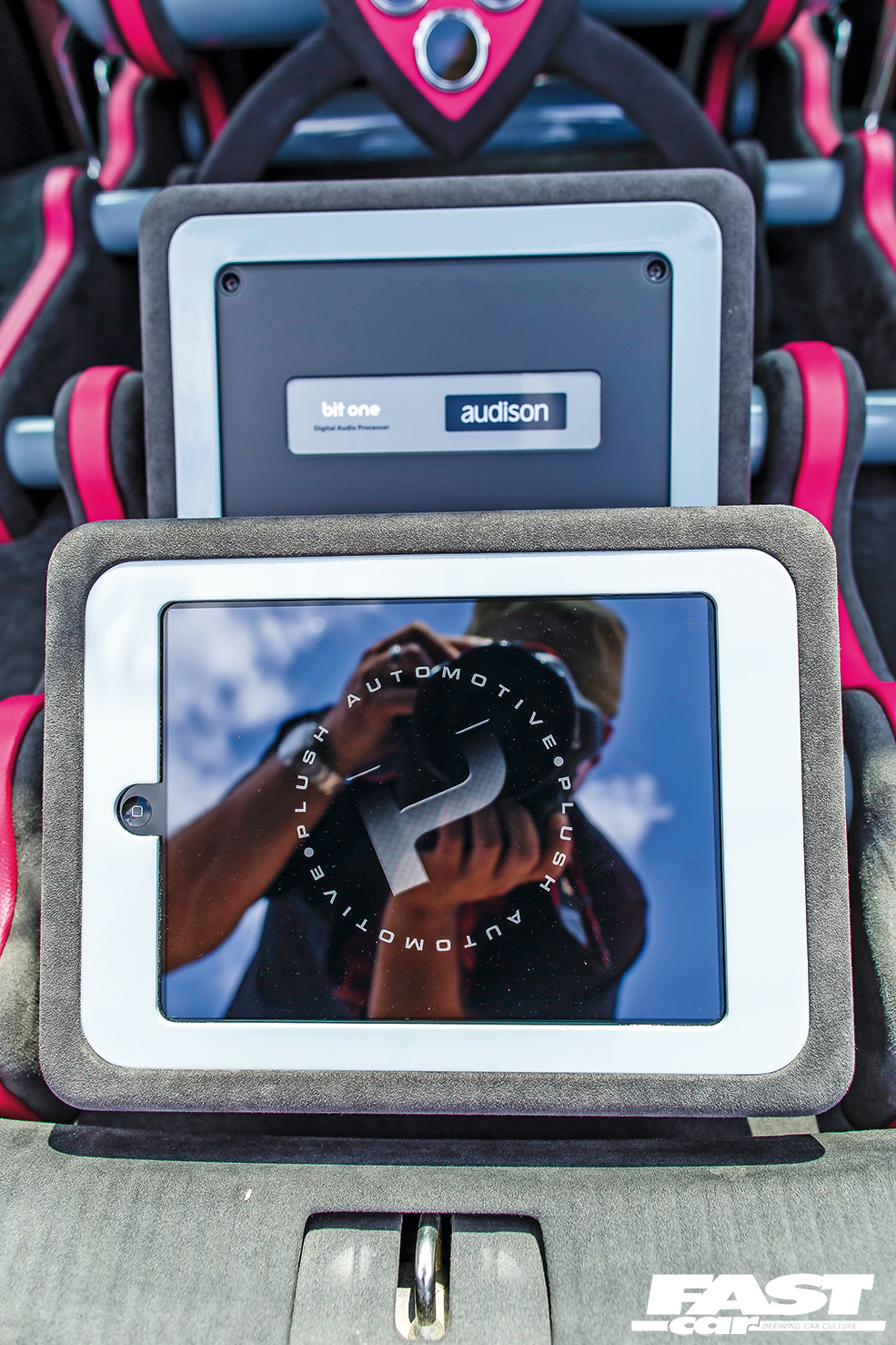 So there you have it. It’s not easy to bag yourself a second feature on the same car but, Jason has reinvented his Audi, making it even bigger and better than before. For that we doff our caps and wish Jason and his glorious chariot farewell, until next time – because it will be back! 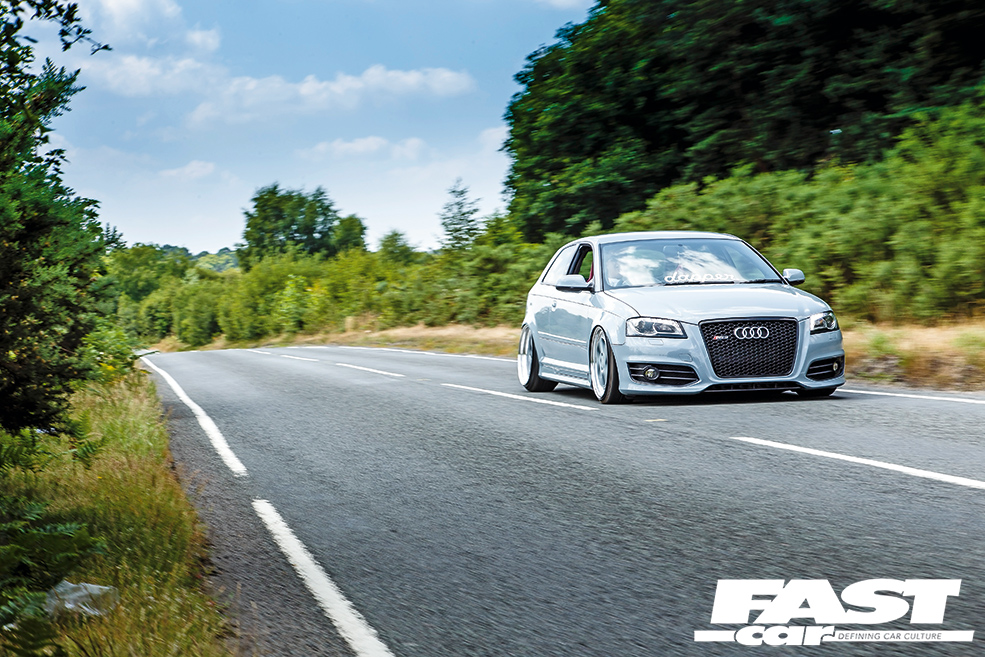 thanks
Plush Automotive – they always give 110% effort into making my car the best it can be and always make the silly deadlines possible, Brian and all the boys at Rotiform for all the custom splits they’ve made for my car, Dooka Detailing for all the endless hours he’s put into the car, Matt and Jonny at Reflex Auto Design for doing a stunning job on the re-spray and all the other work, Specialist Tyres in Letchworth who supply & fit my tyres for me!