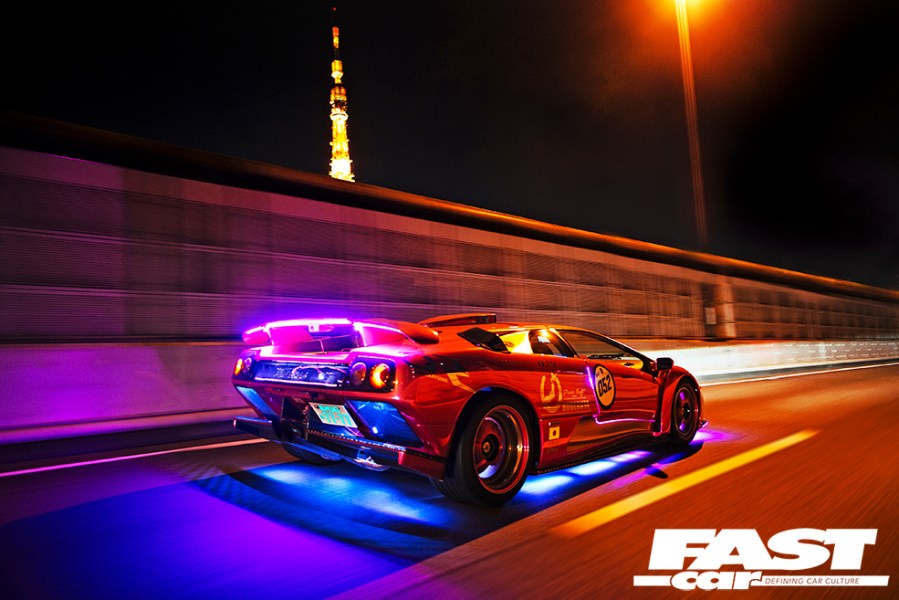 Welcome to this week’s FC Throwback, where we take a look back at some of our favourite previous feature cars. This week it’s Morohoshi-san’s insane modified Lamborghini Diablo Super Veloce from back in 2014…

Forget what you have to do in the Italian capital to turn heads – it’s when you get to Tokyo that everything goes mental!

The first question we normally ask ourselves when looking at any feature car would be ‘would I feel a dick driving it?’ Well, dear reader, with this particular motor it has to be a resounding yes! On the face of it, this 1980s Italian thoroughbred has been modified in such a way that you can almost feel the designers at Lamborghini spit out their cannelloni and fraguni in disgust. Even I have to admit it’s awful, and a big, fat ‘fucking’ awful at that.

But the important thing about this pink and gold beast isn’t so much the actual chunk of neon-lit orimental madness you see before you, it’s the context – this one’s all about where it’s actually from.

You see, drive a car like this through London, Milan or Bognor Regis and, I don’t care how big you think your bollocks are, quite frankly you’ll look a bit of a dickhead. In Japan though, the rules are different, and by that I mean there aren’t any. When you live in Tokyo, the streets are quite literally rammed with crazy tuner cars, Kanjo racers and Kei trucks, there’s a special kind of mentalism too when the Bosozoku-style cars are out in force. Pound for pound you’ll not see (or hear) more wide-arched, neon-lit, brightly coloured craziness anywhere else in the world.

Of course, there are plenty of blacked-out Mercs cruising through Kabukicho, Tokyo’s red light district, too but they’re not exactly there to turn heads, much to the relief of the Yakuza gentleman that often lie within. I guess, the real point is, in Japan you wouldn’t get so much as a second glance in a relatively sedate Euro style cruiser and Shinichi Morohoshi, the man responsible for this particular piece of flamboyant exotica, is all about turning heads.

The whole car came about from the need to be noticed and that notion positively extends to the aura around the man himself. Everything about Morohoshi-san is over the top, from his ridiculously diamond-encrusted trainers, phone and watch, to his infectious enthusiasm about having the wildest motor on the block.

The craziness of the Bosozoku influence is clear, the limitless excess of the gang’s cars and motorbikes is a central theme for this 500-odd bhp Diablo Super Veloce and, considering Morohoshi himself used to run with the tribe, it’s hardly surprising. The gang-life may (apparently) be a thing of the past but giving up the ethos wasn’t quite as easy – he still wanted something louder, lairier and generally more insane than everyone else. Well, he certainly got that, and then some.

Let’s just say his ties with the Bosozoku and Yakuza are well documented, he says he’s not part of any underground organisation and I’m not inclined to ask any further, I’m guessing he wouldn’t tell us if he was, right? I certainly won’t be the one posing the question quite how he affords not just this Diablo but an equally bonkers Murcielago Coupe, Murcielago Roadster and Aventador.

I don’t think he’s exactly a Lamborghini dealer either, but he’s definitely a Lamborghini man thorough and through and that’s not exactly made him popular with the suited-and-booted Japanese businessmen in the local Lamborghini Owners Club. But then, this car very much demonstrates how little he cares what anyone thinks and the fact that it’s pretty ridiculous, even by Japanese standards, has made it a legend, a kind of cult hero on both the back-streets and the Wangan, the Mid Night Club’s old stomping ground.

Nowadays there are plenty of wild supercars created around Tokyo, but this was one of the very first. In fact, the concept of making supercars quite this vulgar was so new when this one rolled out that, not being a tuner or car dealer, Morohoshi-san had a distinctly hard time finding any garage willing to carry out the modifications in the first place.

With this car the minor details of the spec aren’t quite so important either, it’s the whole retina-burning, sense-insulting package. We can talk all day about strobe lights, LEDS, air-horns that play the theme tune from The Godfather and exhausts that make your ears bleed. We can say how they’re not such a good idea and how not to do it but, here in Japan it works, it really does. In this context I even like it myself, and that my friends goes against every fibre of my being, I mean, it’s even got Lambo doors – I absolutely HATE Lambo doors (it is a Lamborghini you goof – Jules).

Would this madness work anywhere else on the planet? No. Does that premise make Morohoshi-san give even an inkling of a shit? No. Is it an automotive icon that thoroughly deserves its place in the limelight though? Oh yes. This badboy deserves it with neon-lit bells on!