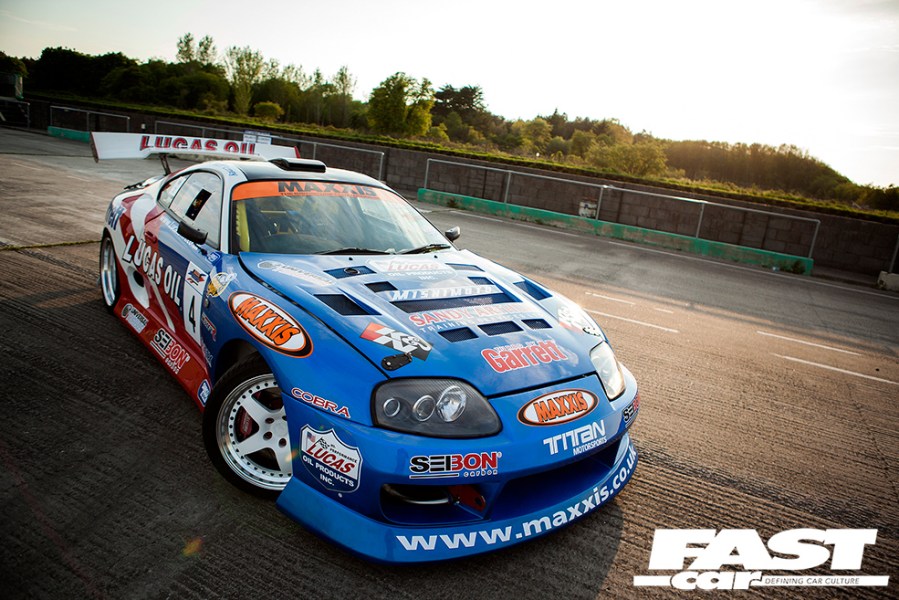 Welcome to this week’s FC Throwback, where we take a look back at some of our favourite previous feature cars. This week it’s the SATS drift Toyota Supra Mk4 from way back in 2014…

What you are looking at here is one of the most powerful Supras in the UK, made famous by its exploits in a bunch of top-end drift competitions across Europe. But why are we featuring it now? Well, this thing has been in constant development since it landed in the UK a few years back, and you kind of know it’s the real deal when American oil giants Lucas get involved.

We decided to spend a weekend with the team at Pembrey Circuit for round 2 of the 2013 British Drift Championship, where we shot these pics, caught up with team leader Chris Arthur and the Supra’s drift pilot, Mark Luney for some tyre smoking fun.

This MkIV has been built with one purpose in mind… to go sideways, and to go sideways in style with as much smoke as possible! Under the Seibon carbon fibre hood, you’ll be greeted by a 2JZ-GTE engine that has been tuned to be capable of over 1000bhp. In fact during the 2012 season it ran that power, but for this year it has been restrained to a mere 868bhp of forced induction, Universal Turbo boosted power, as Team SATS wanted the perfect balance of power and reliability.

But as any drift team will tell you, the set up of the car is as important as the big power figures. There are more trick bits under the arches of this Supra than there are in Dynamo’s secret invisible drawer.

MeisterR are responsible for a lot of the hardware such as the coilovers and the 8-piston brake system, while the rest of the chassis has been set up using Wisefab steering and hub geometry. Very nice.

One of the common misconceptions regarding drifting is that you need a crappy rear tyre to help the car brake traction and slide easily. This couldn’t be further from the truth. A drift tyre needs to be consistent and grippy, to allow the driver to control the slide and have great feel through the rubber. Maxxis have even developed a tyre known as the MA-Z1 Drift and this is the only tyre that Chris and the team will use on the Supra. They have squeezed 275/35s over the 10.5×18-inch BC RA-01 rear rims and 225/35s over the 8.5-inch fronts.

Another vitally important part of any serious drift car is the keeping the weight as low as possible. That’s why last year Chris struck a deal with the guys from Seibon to run carbon panels on the car that complement the Tokyo Salon Car BN Sports Blister kit, which have all been covered in the iconic Lucas Oil livery.

So this beefy Supra looks the part, handles the part – basically this thing is the part and if you can, we highly recommend that you get out and see Mark put the Supra through it’s passes at a BDC round this year. Is it a bird? Is it a plane? Not it’s the SATS Supramen!