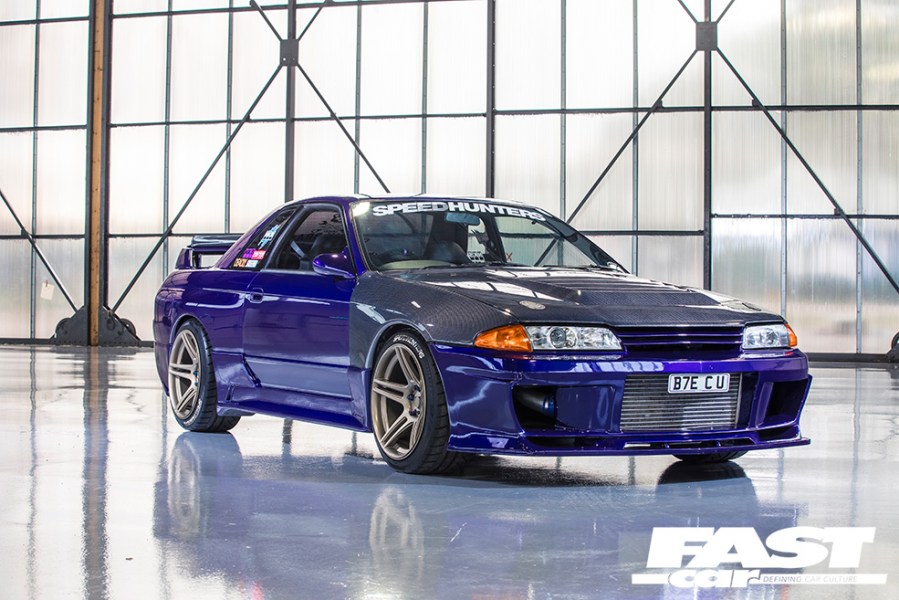 Looking back through owner Dan’s car history, it’s clear that practically his entire life has been leading up to the stage he’s finally reached now: being able to own his very own Do-Luck kitted tuned Nissan R32 Skyline GT-R.

“I’ve had a couple of Silvias, an Evo VIII and even an R34-shaped GTT,” our Leicestershire-based construction manager here reveals. “I’ve could never get over my soft spot for the R32 though…” A passion he developed early on in life, it was around 18 months ago that Dan was finally in a position to realise one of his longest-lived dreams when he snapped up this purple show-and-go stunner here.

“I actually began by looking at Supras,” Dan admits; the Skyline’s infamous twin-turbo rival briefly distracting him. “But I soon reminded myself just how much I’ve always wanted a Skyline GT-R, and set about looking for the very best example I possibly could.” They say it can sometimes be disappointing to eventually meet one of your heroes, and Dan was adamant for this not to be the case by looking for an example that had plenty more to shout about in terms of both performance and styling than when it left the factory.

After much trawling through the small ads, Dan eventually clapped eyes on this particular car. Already boasting the majority of its impressive modifications, and in a suitably pristine condition to match his OCD-levels of attention-to-detail, it didn’t take much persuasion for him to bite the bullet and finally dive head-first into GT-R ownership.

There are arguably two very common paths to go down when tuning Nissan GT-Rs – engine tweaking to obtain monster power, and visual upgrades to create a show-stopping ride. The fact that both of these aspects had already clearly been considered help make Dan’s latest acquisition the perfect illustration of just how much can be achieved from this celebrated platform.

Let’s start under the bonnet because quite frankly, it’d be rude not to. Staring back at you is one of the most infamous internal combustion engines of the 20th century – the twin-turbo RB26DETT unit that is the main star in many a supercar-shaming YouTube video. Here, it’s not only the custom coloured casings and silicone hoses that add to the excitement, but plenty of serious performance upgrades that help the car kick out a not-so-shabby 586bhp. To the wheels.

First off, the block itself has been fully forged and bored to cope with as much power as you can throw at it along the way. Think H-beam con rods and CP/Wiseco pistons and you’ll get the idea of how seriously this task has been carried out. Then there’s some lairy cams in the strengthened head, before two fairly reserved HKS turbochargers have been added into the mix. The fact that this would be seen as a relatively ‘mild’ string of upgrades for this particular engine in the tuning world should tell you all you need to know about this legendary lump.

“It performs great; the acceleration is savage and very exciting!” Dan reveals, the car clearly living up to all preconceptions he might’ve had. Power is transferred through a fairly standard five-speed ‘box aside from a sturdier clutch, further illustrating the outright strength of this car’s drivetrain. Controlled effortlessly through that trick computer-assisted four-wheel-drive chassis, things have been enhanced here with the likes of some TEIN coilovers, Garage D arms and a bigger Brembo brake upgrade from the car’s younger sibling, the R33.

Clearly one of the most rapid things he could’ve bought for the money, then, but that really was only half of the picture. Already rocking that recently-performed blue/purple re-spray that really shows off those revered boxy lines, as well as a genuine JDM Do-Luck body kit to further enhance the exterior aesthetics, Dan’s spent the last year or so picking up where the previous owner left off in terms of making his car look as epic as it now performs.

A great place to start was a set of fresh and heavily-concaved 7Twenty rims to really fill out the car’s signature arches. Set off in a contrasting bronze and shod in some Westlake tyres complete with the all-important tyre wall stickers, there’s no denying the squat, functional stance that’s been left as a result.

“I also added a lot of carbon fibre, including the front wings which are one of the only examples in the country,” Dan adds, the parts custom-made after he mistakenly purchased some GTS-t-shaped units that didn’t quite fit the bill. There’s also the vented Z-Tune-style bonnet and small touches like the gurney flap on the rear spoiler that finish the job off perfectly.

The fact it’s still able to cut it with the new kids almost three decades on is a real testament to the ongoing impact the Nissan R32 Skyline GT-R has had on the car world. It also helps to explain why prices of these cherished models have only skyrocketed in recent years, too!

THANKS
Thanks to JM-Imports and EP Racing for suppling parts; Germaine at GS Automobile and last but not least; my missus for putting up with my addiction!