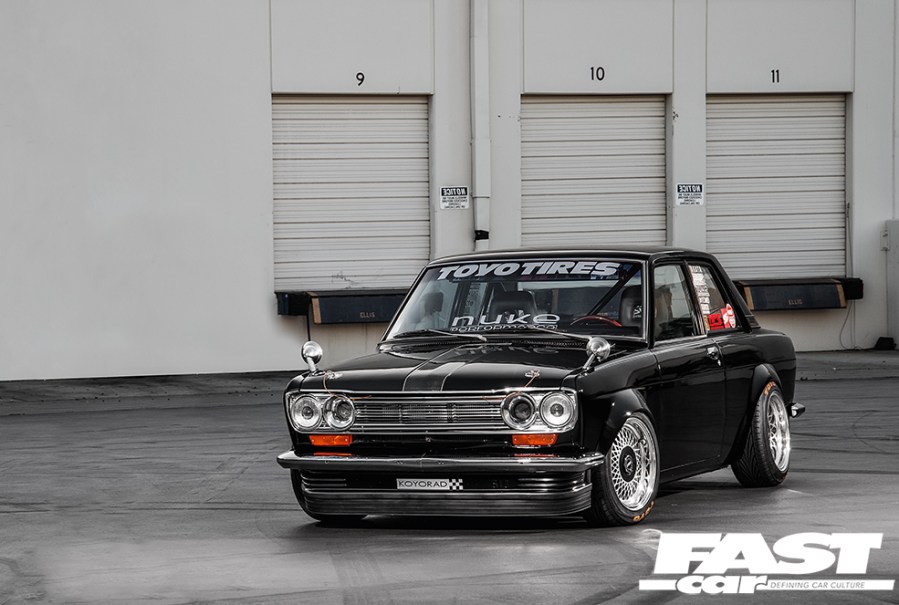 Dominic Le may have an SR20 in his Datsun 510, but he’s tuning it the old fashioned way. And it’s not the SR20 you’re expecting…

The Datsun 510 spent a long time in the retro wilderness, with few people in the scene being totally sure what they were – a baby Cortina? A scaled-down Lada? These set-square three-boxes used to cause a lot of headscratching in old-school circles. This reputational obscurity began to peter out around a decade ago when some really original and high-spec 510 builds started to pop up, emulating the glory of the period Datsun race cars, and now that people are really cottoning onto their charms we’re finding that it’s pretty unusual to spot them up for sale – at least in any sort of salvageable form. And it’s a fairly safe bet that if you see one out and about, the owner probably has another one at home, or lurking in their past. 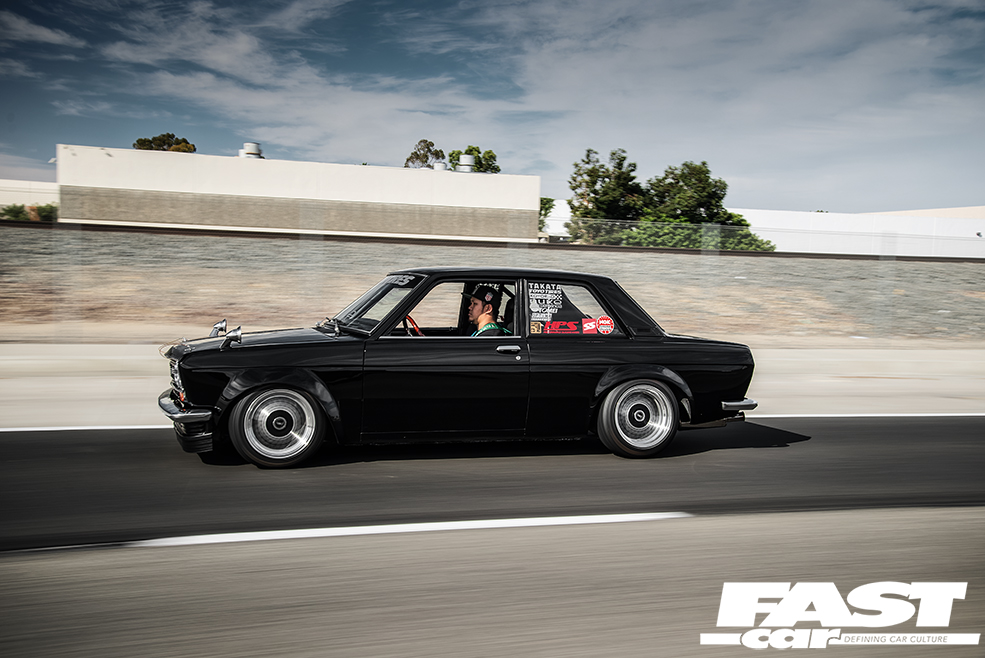 Dominic Le, the owner of this shimmering black example, began his 510 journey with a rather cruddy sedan, which rather swiftly made way for this two-door once he’d identified it as a better base for a project. “I found this car in San Diego, and the seller said it was a running car with a small fender bender,” he recalls with a grimace. “But that supposedly minor damage turned out to be a full-on front-end impact which had crushed the passenger side.” With this being the favourable base, you can only imagine what that sedan must have been like…

“As bad as it sounds, I just had to have it,” he continues. “I’m a strong believer that everything happens for a reason, and this 510 was plenty reason enough for me.” Fair enough – sometimes when you know, you know. And so it was time to roll up his sleeves and get stuck in. 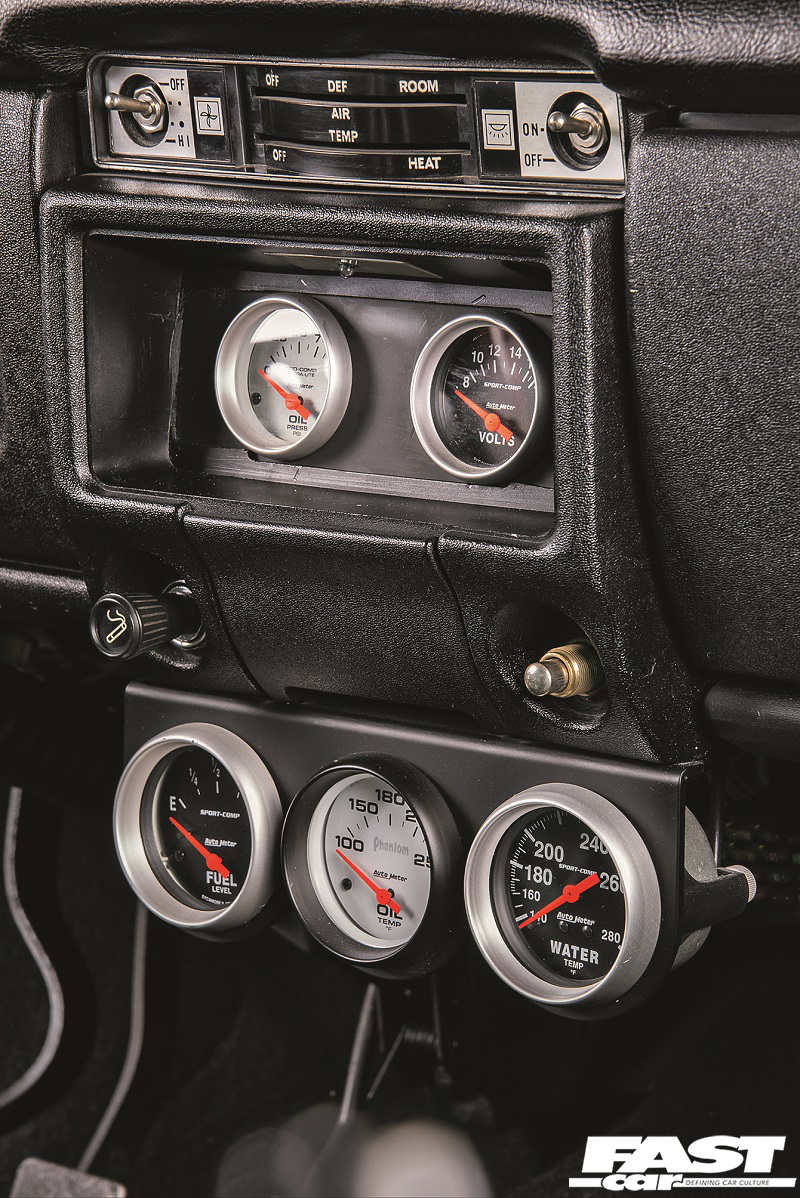 Now, Dominic is a man who strives for perfection. This was never going to be a thrown-together lash-up; ‘good enough’ just isn’t good enough. Working day-to-day within the financial heart of Mitsubishi’s North American headquarters, as well as working with Nuke Performance in addition to that, he knows more than a little about precision and fastidiousness. So countless hours were poured into straightening and perfecting the bodywork, getting everything just-so; the wings received a set of BRE flares in homage to the retro Datsun racers that Dominic admired as a child, while the rest of the bodywork was kept as simple and clean as it left the factory. Never one to make things easy for himself, he had it in mind to shoot the shell in Mercedes-Benz Jet Black and, as any bodywork aficionado will tell you, that’s pretty much the least forgiving colour. Everything had to be beyond perfect; dream-like, almost. And he’s achieved that rather well, hasn’t he? 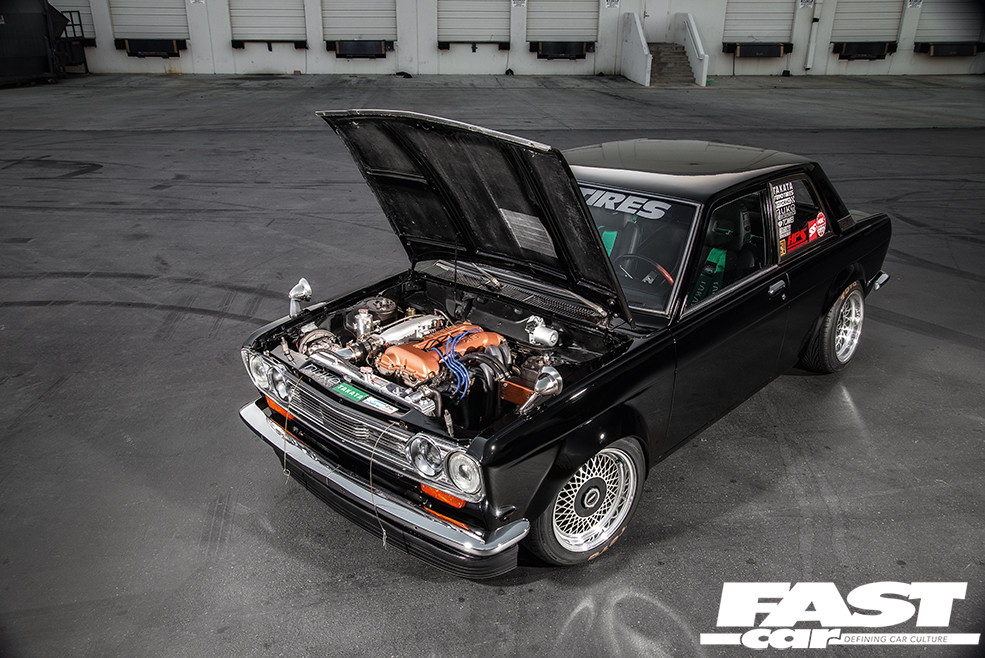 What’s most notable about this build, however, isn’t the Darth Vader looks. It’s what’s lurking under the bonnet. You see, our hero has opted for Nissan’s SR20 engine… but not in the manner you’d expect. Sure, it’d have been easy to plunder a 200SX for its boosted twin-cam, but instead Dominic has chosen to go down the nat-asp route with an SR20DE. This JDM option was originally found in things like Primeras and Rasheens, offering a sturdy but inoffensive 140bhp in stock tune. A healthy base for tuning, but why not just make it easy on yourself and go with the bigger-power, more abundant turbo motor? 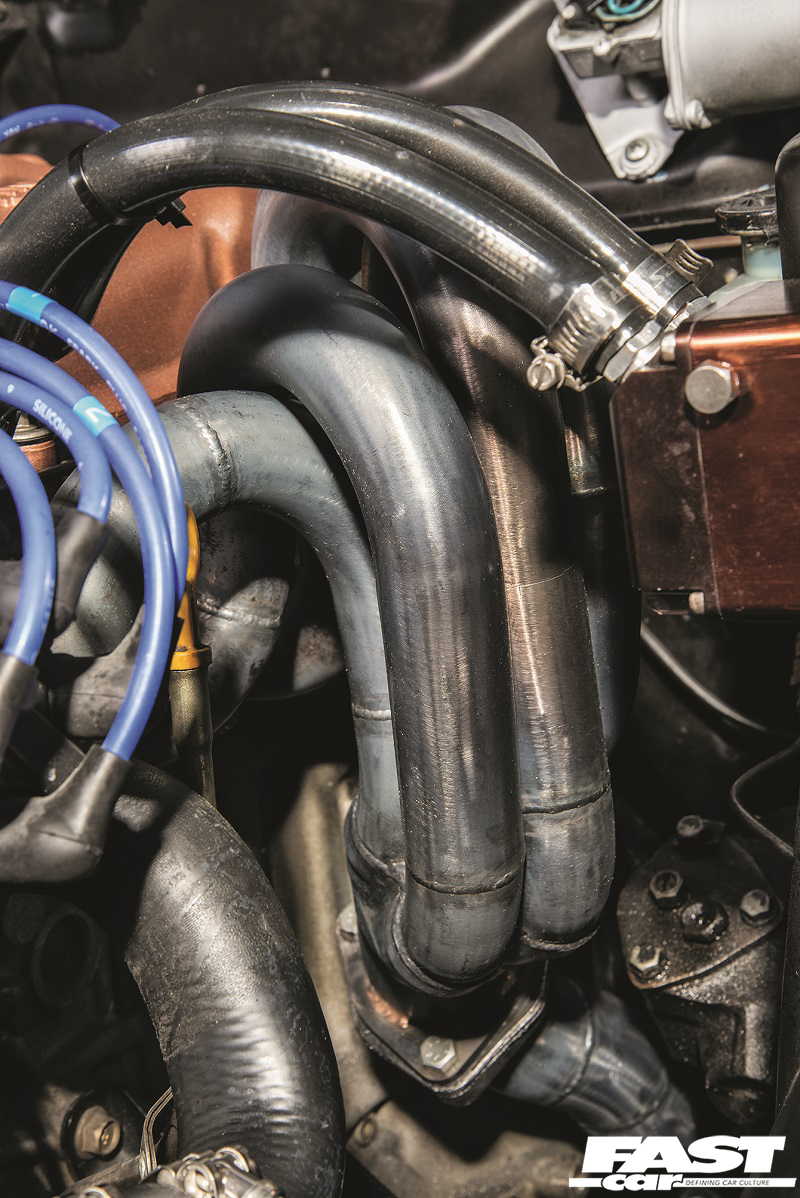 “I wanted something simple, and to not have to worry about the problems that a turbo motor might bring,” he shrugs, matter-of-factly. Although it didn’t quite work out that way, it has to be said. “To my surprise, this simple engine wasn’t actually that simple at all! There wasn’t much information on the motor here in the States, so when I did the wiring it took me months to figure it out – but to be honest, I really wanted to have a powerful, naturally-aspirated motor.” Knowing that something fairly radical would be required in order to achieve this goal, he opted for a Tomei stroker kit, which took the displacement out from 1,998cc to 2,188cc, and also threw into the mix Tomei’s PonCam camshafts, fuel pressure regulator and valve springs. The headline figure that he’d been shooting for with all this was a nice round 200bhp – quite an improvement over the stock output – and he went all out in pursuit of joining the two-hundred club. Bigger injectors, throttle-body mods, custom exhaust work… when you consider the weight of the thing, that’s more than plenty to be entertaining – and as if that wasn’t entertaining enough, it revs to 9,000rpm! Hilarious fun. 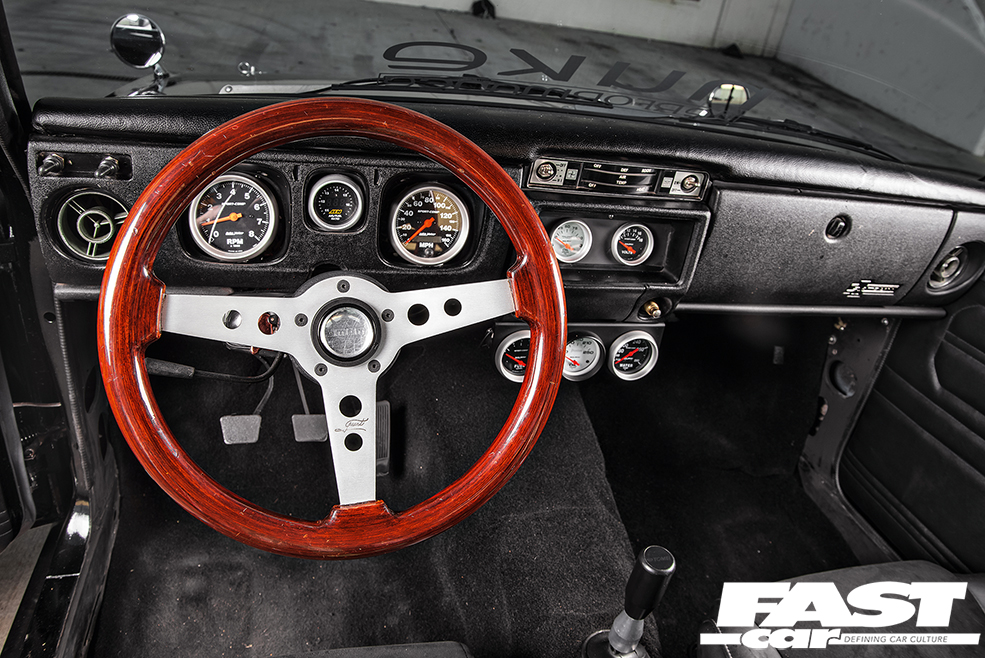 Half the battle with building a fast-road car is in the handling, of course. You can have all the power in the world, but if you can’t deploy it, it’s basically meaningless. So Dominic put a lot of thought into setting the chassis up right to make for an entertaining steer. “The front has 280ZX struts and shortened FC RX-7 Tokico shocks, with QA1 coilover perches and custom camber plates,” he explains. “Out back, we’re looking at a modified crossmember with custom camber adjustment, and KYB AGX shocks with QA1 coilover adjusters and Eibach 300lb springs.” This isn’t off-the-shelf stuff, this is research paying dividends. And naturally it would be madness to throw such a percentage power increase at the factory brakes, however advanced they may have appeared in the late-1960s, so Dominic’s plumbed in a custom Wilwood big brake kit at the front, with an artfully reworked Nissan Maxima disc setup on the back axle. For the sake of belt-and-braces, the diff is an R180 Subaru STI unit.

It goes without saying that project cars live or die by their wheel choices – that’s the fickle nature of social media, if nothing else – so it’s pleasing to note that Dominic’s played a blinder with the rolling stock too. A 15-inch diameter is very much an appropriate size for a 510 of this nature – you have to be very careful when over-wheeling a classic, you need to be able to justify yourself – and Enkei’s EK64 is a belter of a design. It’s as if someone took the meshy wheels from a three-door Sierra Cosworth and rebuilt them with a bit of extra dish – what’s not to love? 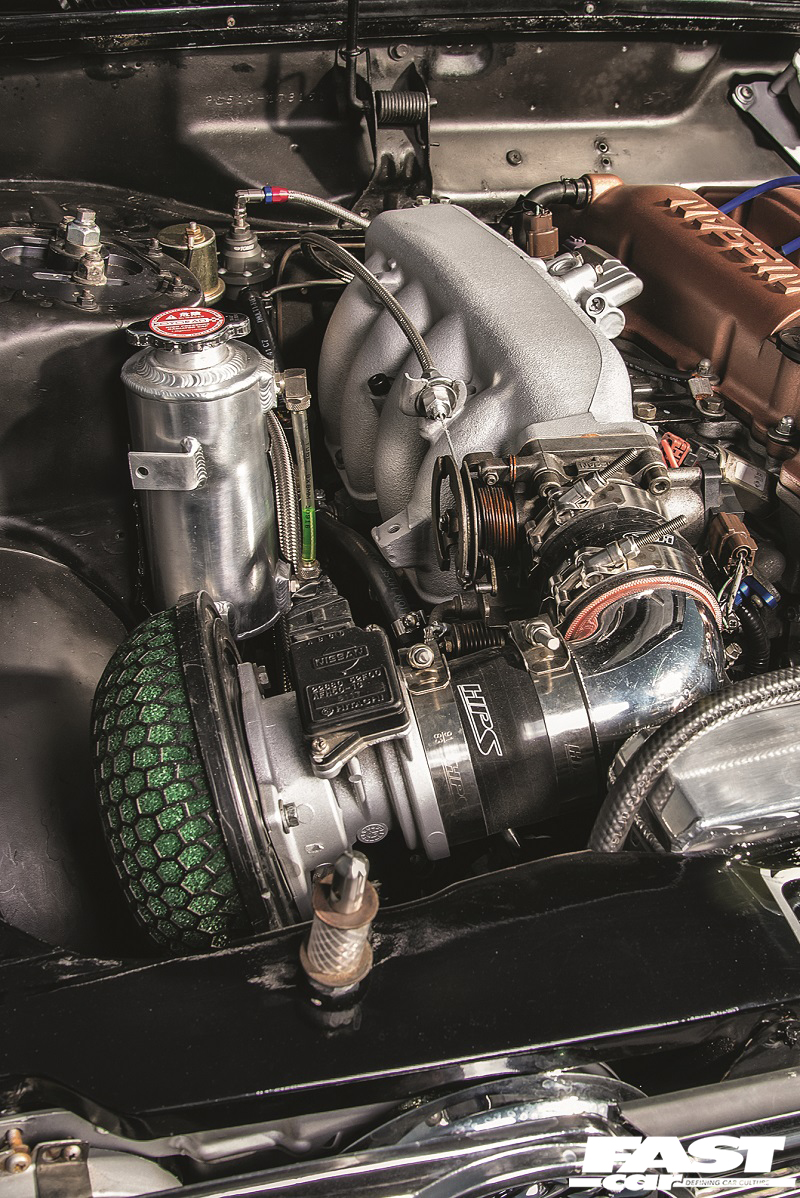 As you might hope from a man with such passion for the marque – and Dominic’s got three 510s in his collection now, it’s hard to keep up – this little black street-racer is a riot of detail. Take a look at it from head-on, you’ll spot that amongst that mile-deep, near-liquid black paint he’s left a broad exposed stripe on the bonnet, to showcase that it’s been replaced with a carbon-fibre item. Beneath its lip sit BMW E30 projector headlights in the outer holes, the inners having been sacrificed for performance purposes. The JDM wing-mounted mirrors say more about retro chic than mere words can convey; the period aftermarket airdam is glorious (“That came from an older gentleman in Maryland,” Dominic says. “He used it on his own racing 510 during the early 1980s…”) and the juxtaposition of those flared arches with the broad Enkei rims really does evoke those BRE racers that Dominic clearly still yearns after. 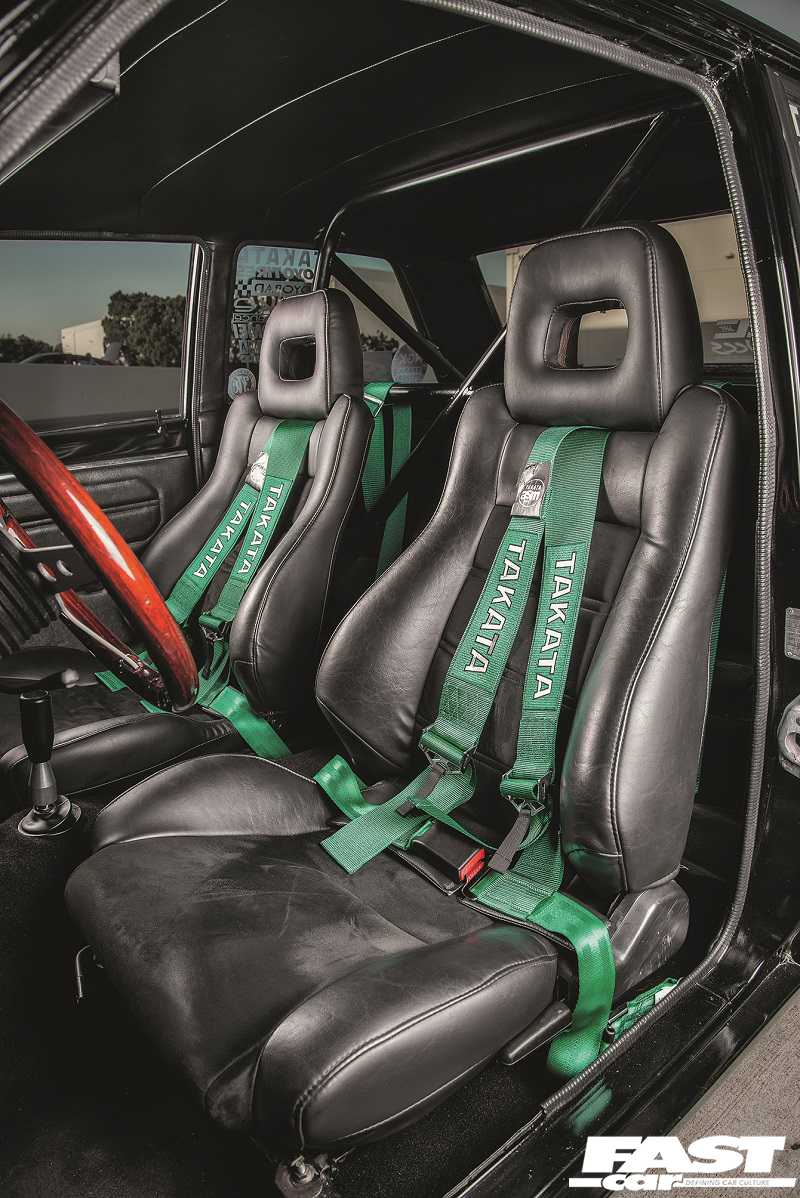 The story continues inside the cabin. Those old-school Recaros you see actually came from a Honda CRX – but hey, there’s an SR20 under the bonnet, he’s not trying to win any concours trophies for originality – and they’re neatly complemented by all manner of custom trim, as well as a half-cage whose oh-so-visible diagonal bar acts as a statement of intent for anyone in the rear-view mirror who may be foolish enough to try it on.

“My mother helped to sew up the leather headliner and door panels,” he smiles. “I hadn’t really worked on interior trim before, and this gave me something new to learn – and the result turned out pretty good!” 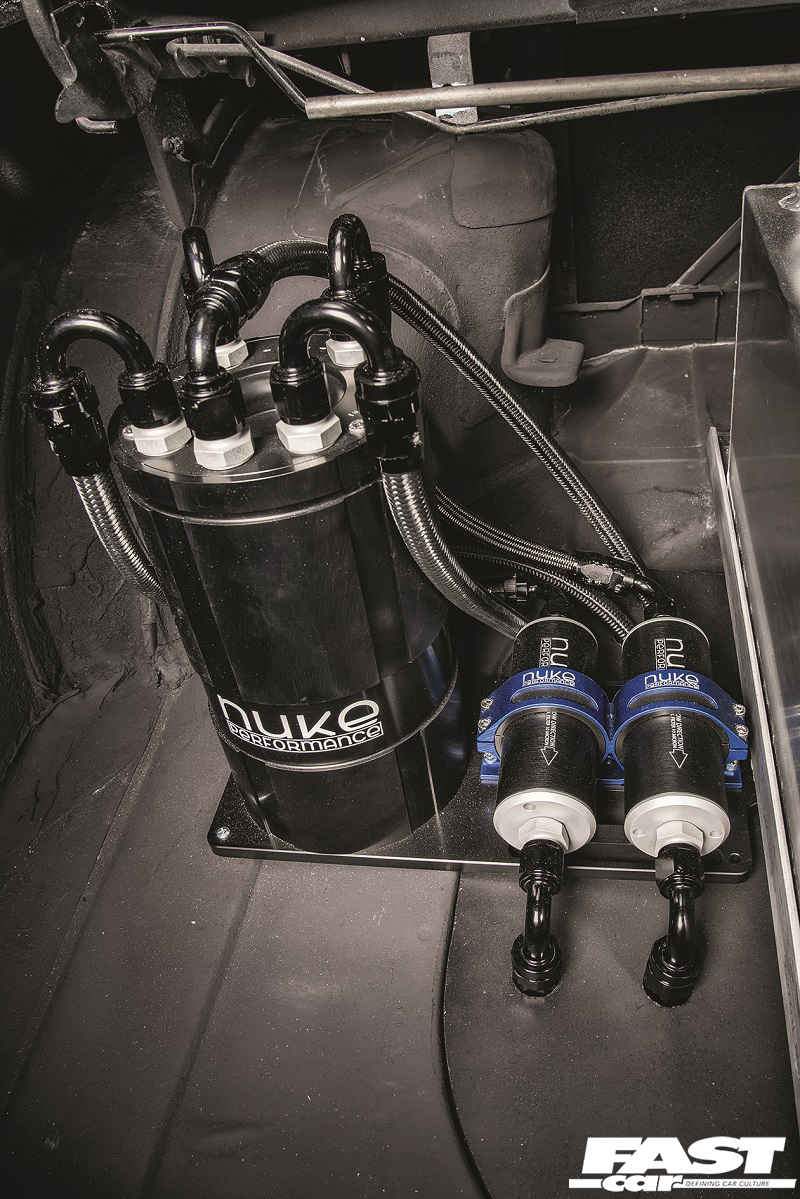 While trimming leather and Alcantara was a new adventure, what Dominic really knows is fuelling – his work with Nuke Performance means that he knows about petrol delivery inside-out; as such, you’ll spot a substantial fuel cell in the boot along with a surge tank and external filters, feeding precious lifeblood to that racy, high-revving twin-cam. If the engine is the wrangled soul of this 510, that intricate fuel system is its beating heart.

This, in fact, is a build with a massive amount of heart. And passion, and personality. Indeed, it’s the culmination of years upon years of playing about with cool old cars, chasing the unicorns of childhood memories, and splicing together automotive DNA to make those dreams come true.

“I’ve always messed around with cars since I was young, and I never thought I would make a career out of this hobby,” Dominic enthuses with a charged twinkle in his eye. His excitement is infectious and it’s impressive to consider that, while a build like this would represent the final, ultimate project for a lot of people, for this guy it’s a stepping stone. Think this 510 is cool? Just wait ’till he’s finished the next one… 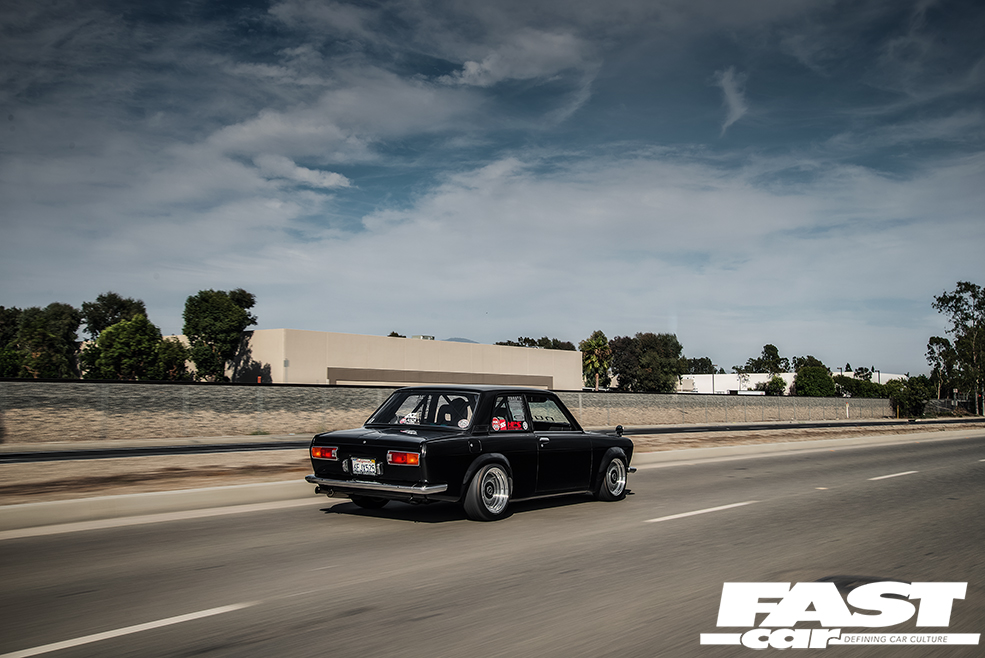