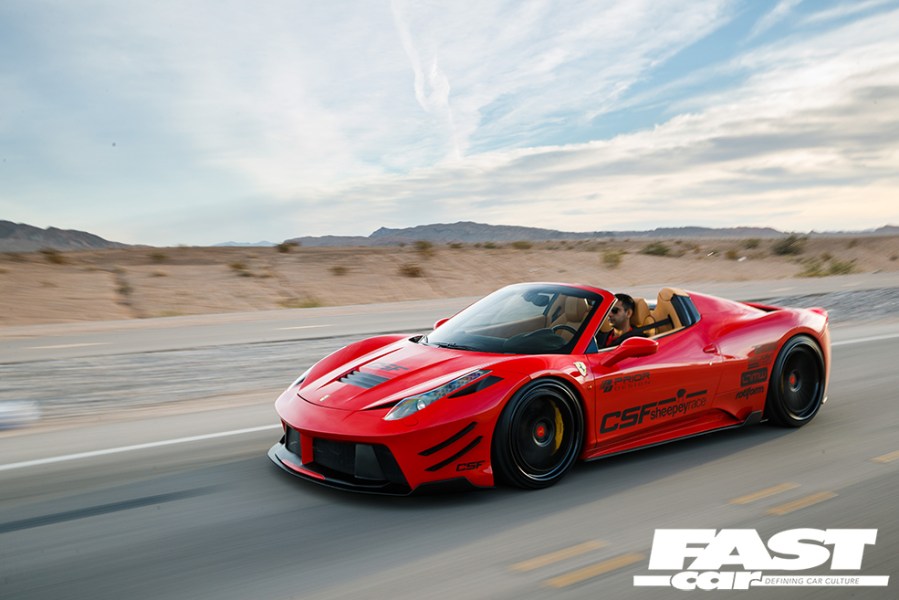 The Ferrari 458’s F136 engine is one of the all-time great naturally aspirated V8s. So what happens when you bolt on a couple of turbos? Well, the results are pretty crazy…

Turning a Ferrari 458’s Manettino to Race mode is like plunging through a wormhole in space, tumbling into a distorted mirror and slamming straight through the back of the celestial closet into whatever the petrolhead alternative to Narnia is. Even in friendlier Sport mode it’s a pretty brutal proposition: a 562bhp V8 with a howling 9,000rpm redline, making a noise like a tortured choir of wronged angels, mated to a 7-speed dual-clutch Getrag ’box.

This all runs hand-in-hand with smart E-Diff and F1-Trac systems, carbon-ceramic brakes with a ‘pre-fill’ function, drag-reducing deformable front winglets… and when you click that little switch to Race mode, all bets are off. Gear-shifts times are quickened, suspension stiffened, traction control loosened, and it’ll let you bounce off the limiter for giggles rather than automatically shifting up for you. The thing just wants to play. But it’s not a game for the faint of heart.

The breathtaking performance of this model reframed what we thought we knew about road-going performance cars when it was launched in 2010. It was staggering, devastating, perhaps even tiptoeing up to the warning sign marked ‘too much’.

But for some people, too much ain’t enough. You’ll notice that the animal nature of this 458 Spider has been ramped up by expanding the menagerie of creatures involved; whereas the factory 458 is liberally studded with equine motifs, in this instance the prancing horse is joined by sheep. Lots of sheep.

Now, our woolly chums have never really been associated with sporting prowess, but there’s a shadowy clique of gearheads out in southern California who are keen to challenge this viewpoint. Sheepey Race is a company run by enthusiasts, for enthusiasts. Otherwise known as Sheepey Built and renowned for their tuning expertise and innovation with Hondas, Mitsubishis and other fast-road Japanese fare, the team have recently been dipping a toe in the vibrant waters of supercars and motorsport – with some startling results.

These are not people who do things by halves. There’s a big name pulling the puppet strings, which helps explain the forthright nature of what’s been achieved here. And that name is SEMA. The annual trade show draws the great and good from across the globe to Las Vegas for a colossal extravaganza of awesomeness in which everyone shouts louder than everyone else. If you’re building a car for SEMA, you pull out all the stops. Because the world is watching.

With this in mind, Sheepey founder Alex Soto pulled together a squad to craft something unique. Largely based in southern California (aside from bodykit artisans Prior Design, from Germany), a crack team of experts comprised LTMW, Rotiform, CSF Radiators… big names and the sort of people you can trust to get this stuff done right.

Firstly, the guys were keen to fit an eye-catching bodykit to the car, because there’s just something deliciously naughty about doing that sort of thing to a Ferrari. And secondly, Alex wanted to develop a twin-turbo kit for it. As you do. No biggie.

This is a particularly alluring idea for Ferrari owners. A long-standing bone of contention has been that aftermarket twin-turbo kits for Lambos are readily available, whereas for Ferraris, not so much. So what Alex set out to achieve here wasn’t just about breaking necks at SEMA. It was a public service. Now all those Ferrari guys lusting after forced induction have somewhere credible to turn.

The car for this project is a 2013 458 Spider, although at first glance you might be forgiven for thinking a LaFerrari had just slipped into your field of vision, such is the aggressive nature of the Prior Design kit. Expertly applied by Long Tran at revered modifying superhero hangout LTMW, the kit’s been perfectly colour-matched to the factory paint and it really beefs up the profile.

The car now sits markedly lower thanks to its Novitec springs, and the colossal wheels filling out those pumped-up arches, like a shot glass full of pure adrenaline cut with a dash of snake venom, are a custom set of rollers fabricated by the wheel-wizards at Rotiform. You’re looking at 22 mighty inches of forged, three-piece splendour.

What have Sheepey Race been up to beneath that engine lid? It’s a fairly comprehensive mechanical transformation. The Sheepey system centres around a brace of Precision 6062 Gen 2 .82A/R turbochargers, each one a work of art with a forged aluminium compressor wheel and air-cooled, dual ceramic ball-bearing centre housing rotating assembly. These work in conjunction with a pair of Turbosmart Hypergate45 wastegates and Race-Port 50mm blow-off valves, and the pipework really is gorgeous – not just quality, but native quality.

It looks utterly fabulous and you can’t argue with the results: the team’s engineering prowess has unlocked 700bhp at the wheels, and that’s running at a very safe and conservative 5psi. This means that while the system may be making seismic alterations to the powertrain’s delivery, it’s not causing undue component stress in doing so. This seemingly brutal setup is actually docile enough for day-to-day use.

A hidden element of genius within the system is thanks to CSF’s mould-breaking technology, intelligently customised by Sheepey. You see that tank at the rear of the engine bay? That contains a pair of CSF air-to-water intercoolers. As opposed to the usual air-to-air system you’d find in a traditional front-mount intercooler, these use a water reservoir for cooling. The filler cap at the top can be used to stuff it with ice water. Liquid-to-air coolers are technically more efficient in their operation, with a pair of custom CSF heat exchangers completing the cycle, and Sheepey’s execution has packaged it all with panache.

Despite the truncated deadlines of SEMA, coupled with the pressure of knowing that a judgemental global audience will be keenly watching, the masterminds behind this project have turned out a quality product. But it also represents the importance of restraint. There are tiers of ostentatiousness in the world of supercar tuning, as the base car for any given build will be quite outrageous by its very nature. And sitting low-slung over huge wheels, slathered in the logos of the firms involved, there’s no missing the fact this isn’t your run-of-the-mill 458. But at the same time, the superbly chosen and flawlessly finished bodykit, combined with the stock-looking exhaust outlets and absence of look-at-me aesthetic alterations, means that few will suspect the sheer ferocity of this malevolent Ferrari. At least, until Alex blips the throttle, and the rapidly rising howl of that low-inertia V8 is joined by a crescendo of turbo whistles, followed by the sneezing and chattering of wastegates when he lifts off. Sure, the 458 comes with Race mode as standard, but these guys have taken that concept to a whole other level.