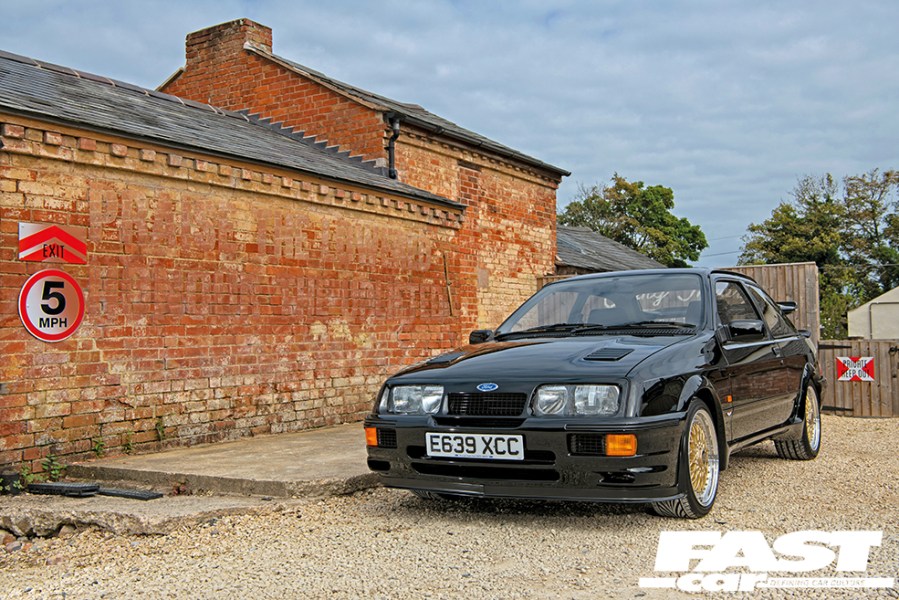 With 450bhp on tap, this Concours Ford Sierra RS500 Cosworth is a very dark (and shiny!) horse that’s taken home a title.

Few Fords look more menacing in your rear-view mirror than a black Ford Sierra RS500 Cosworth. In the 1980s, whether you drove a Porsche 911 on the street or a BMW touring car on the track, Ford’s ultimate Sierra left a terrifying impression on anyone it pushed out of the way.

Kev Murby’s experience of the whale-tailed icon was slightly less visceral, but no less memorable. “I had a very unique picture on my wall at work; it was of a black Ford Sierra RS500 Cosworth parked in front of a futuristic-looking glass building. Every single day I looked at that picture, and promised myself that I’d own one,” he remembers.

Fast forward a few decades and Kev has fulfilled that promise while at the same time bringing this particular example back to its former glory. As he explains, “I came into some money around 2014, and wanted to finally scratch my RS500 itch, but prices were on the increase already and there was no way I could justify spending £100,000 on what is still a Ford Sierra.” 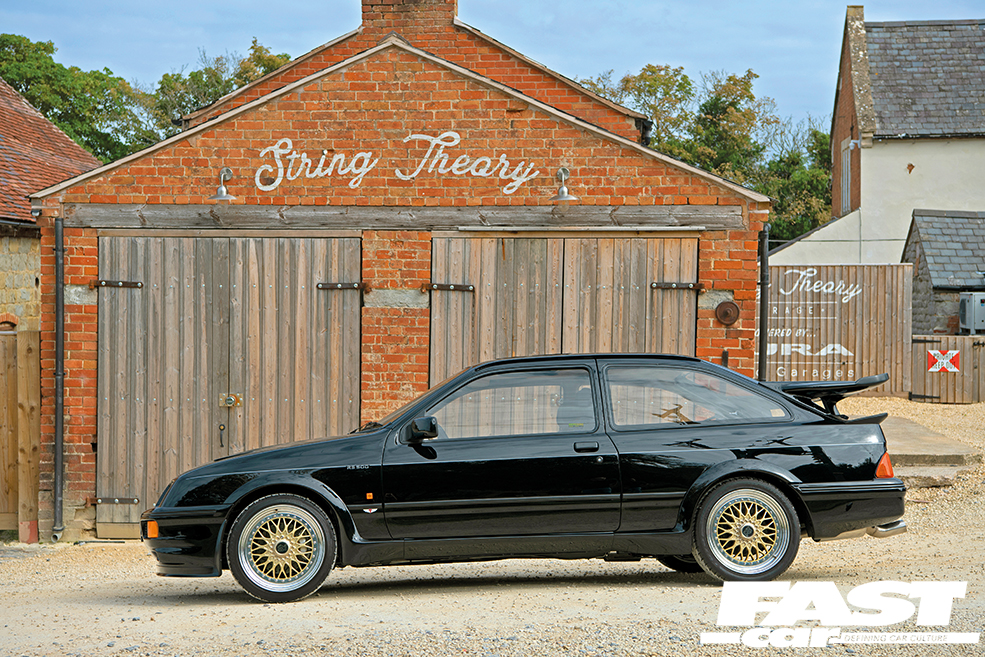 Kev was determined to buy a solid car but not a minter, at a sensible price. Oh, and it had to be black. He says, “Over the years, I’ve owned a black Mk3 Cortina, a black XR4i, a black JPS Capri, and I’ve got a black rear-wheel-drive Sapphire Cosworth at home, as well as the RS500. Black cars just look better than any other colour – when they’re clean,
of course.”

Most of us would have failed in finding such a unicorn, but after years of competing in concours events with his Saph, Kev was well connected on the RS scene. He received a friendly tip-off about a Sierra RS500 from well-known Cosworth aficionado Paul Linfoot.

Kev explains, “I think Paul wanted to keep it for himself, but he was in the process of buying a very special RS500 at the time, so sold this one to me to free up some cash.” 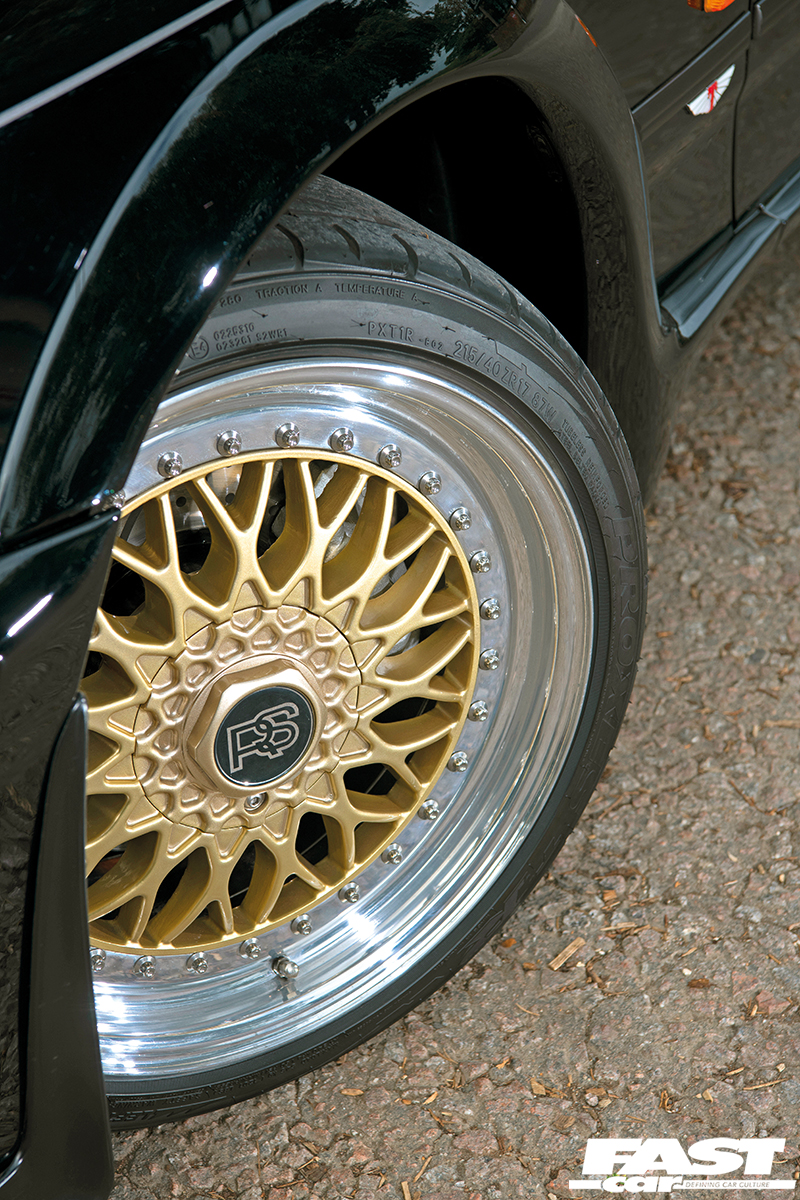 Although the car was tired and had been badly painted, it was very straight and honest, and all the important numbers matched – including the engine block and head. At £30,000 it was also good value, so without having even viewed the car, Kev organised for it to be picked up and delivered to his home, where the rebirth of an icon could begin.

Kev didn’t hang about: within a week the engine was out of the bay to be assessed by Dave Pritchard of DP Motorsport, and the car was up on axle stands, where a long and arduous love-hate relationship began between the garage floor and Kev’s back.

He groans, “I spent around three hours every night for months on end, laid down, looking up at the floorpan, cleaning the underside with my little Dremel. It was horrific work and I wouldn’t do it again for all the tea in China, but once the red oxide and paint was on, the result was worth it.” 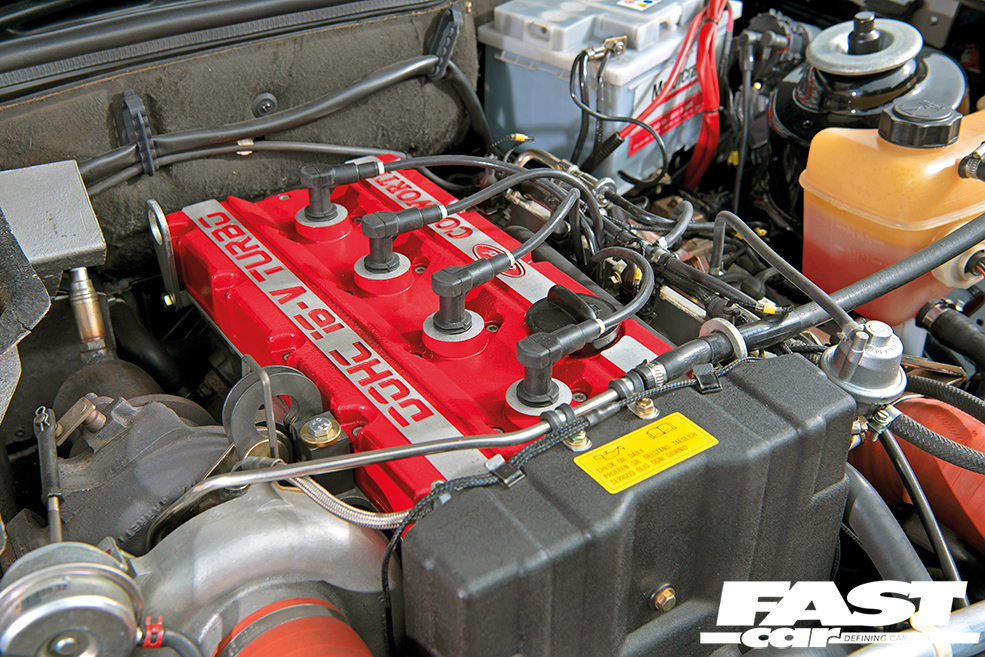 By now, Dave Pritchard had dismantled the engine and discovered some good and some bad news. The good news was some trick head work had been done back in the day, by Dave Brodie of BBR. Kev says, “It was superb work, but unfortunately the rest of the engine needed a rebuild, as internally it looked like it had been sandblasted.”

The discovery offered Kev the impetus to rebuild it to better-than-new condition. “DP asked what I wanted from the rebuild, and I said to be driveable and quick. We ended up making 447bhp and 396lb.ft, and although you need to stay above 4000rpm to really keep it on song, it is very quick indeed.”

The concours Ford Sierra RS500 Cosworth runs four big Siemens injectors, and the T4 turbo has been rebuilt with billet wheels because the originals are hard to get hold of nowadays. The whole ensemble is kept in tune with a retrofitted Level 8 ECU, live-mapped by PJ Motorsport to a maximum 28psi of boost. Kev doesn’t see a need to go any further, and he sums up the experience of a 400bhp-plus T4-equipped rear-wheel-drive Cosworth road car perfectly: “Hit the right revs, and all hell breaks loose.” 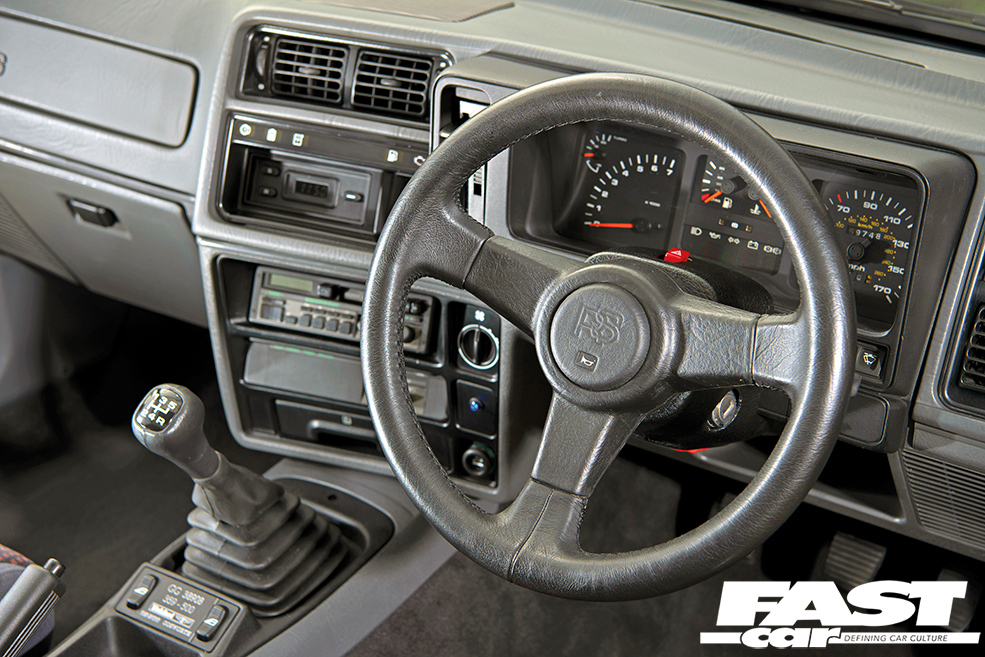 The engine went back into an already-mint bay, as Paul Linfoot had previously conducted one of his underbonnet restorations. The rest of the bodywork desperately needed attention, but an initial respray ended in tears.

Kev explains, “I’d wanted Wayne Parrott to do it, but he was busy with work. So I took it somewhere else, and a year later, the whole car micro-blistered.” In fact, when Wayne assessed the damage, he was able to peel the paint off in strips with a razor blade.

Kev was wounded, but after a second respray, by Wayne this time, the car is still in stunning condition five years later. So much so that Kev has enjoyed entering it into concours competitions alongside his Saph. 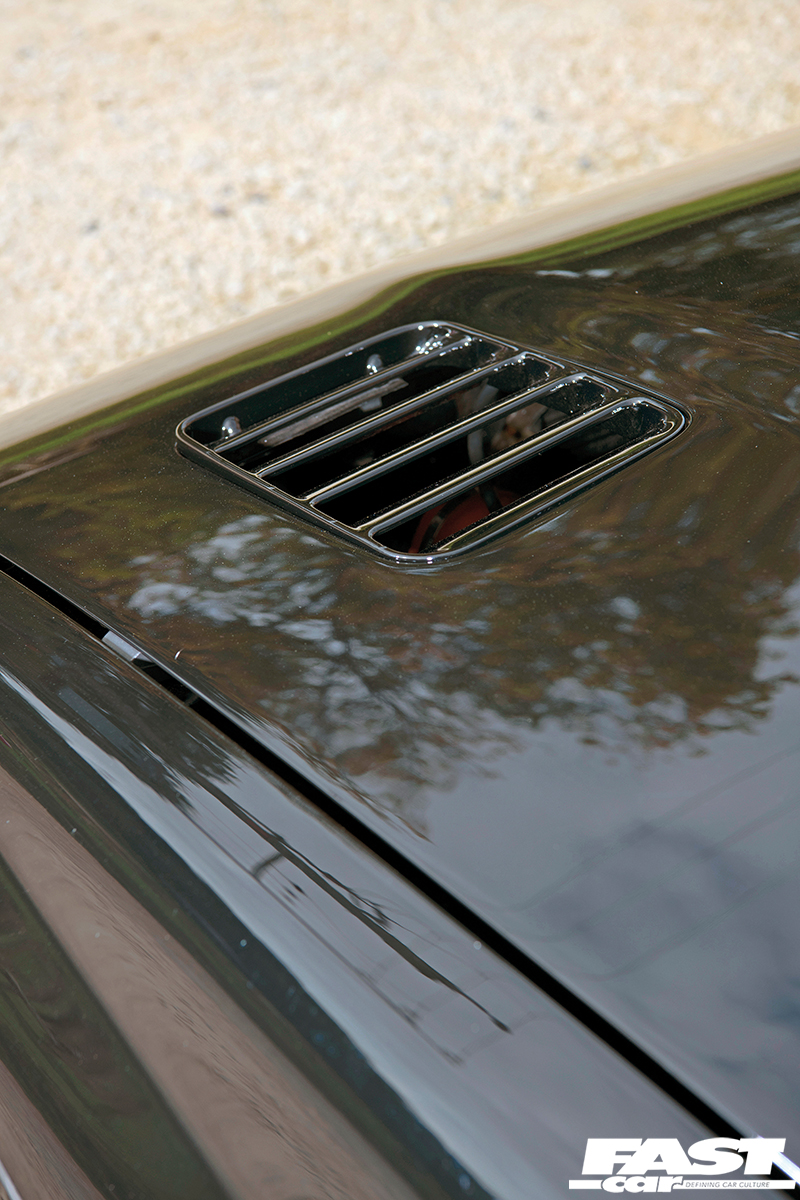 He says, “My son and I drive the cars to the events, show the cars and then have some great drives home. They do get used hard, which surprises some people, but life’s too short not to enjoy these cars properly.”

Kev swaps the CXN wheels for a standard set of genuine RS500 items to enter concours, and with such a relatively standard-looking car he has won his fair share of events.

He smiles, “My proudest moment was winning the best-presented standard car at RSOC National Day. It genuinely bought a tear to my eye with pride. 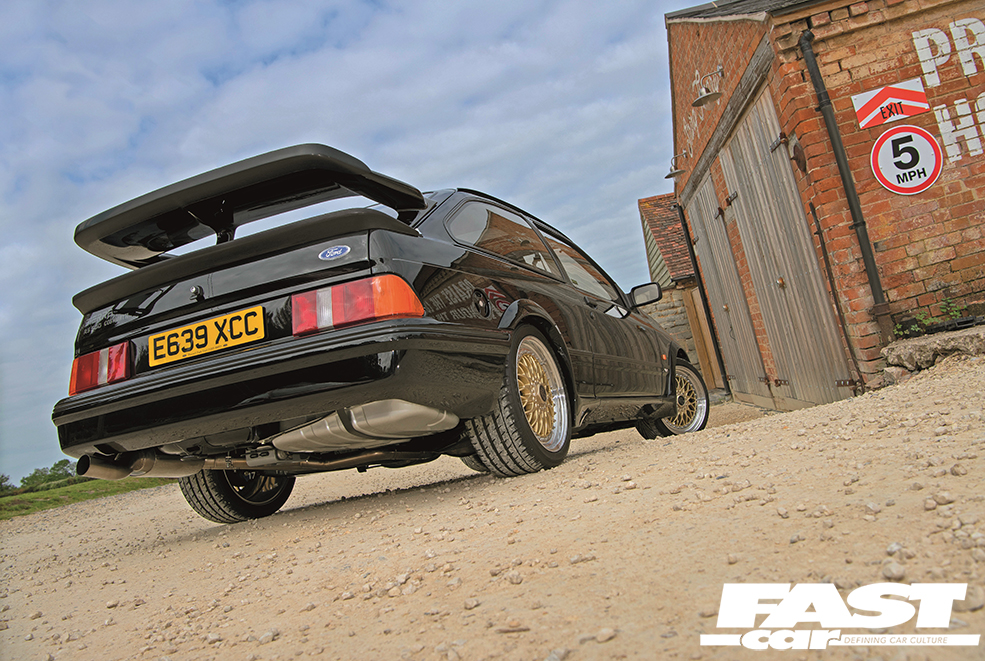 “The RS500 ownership experience is much like owning other Cosworths. I get immense pleasure out of driving it, and the cars deserve to be brought to the best condition they can – striving for that goal can also bring their owners so much pleasure.”

So much that Kev has now become the RSOC RS500 registrar. Does that mean he can officially value his own car? “Unfortunately not. But even if I could, it’s not about the monetary value – I’ve finally got the car from that poster, and that’s priceless.”