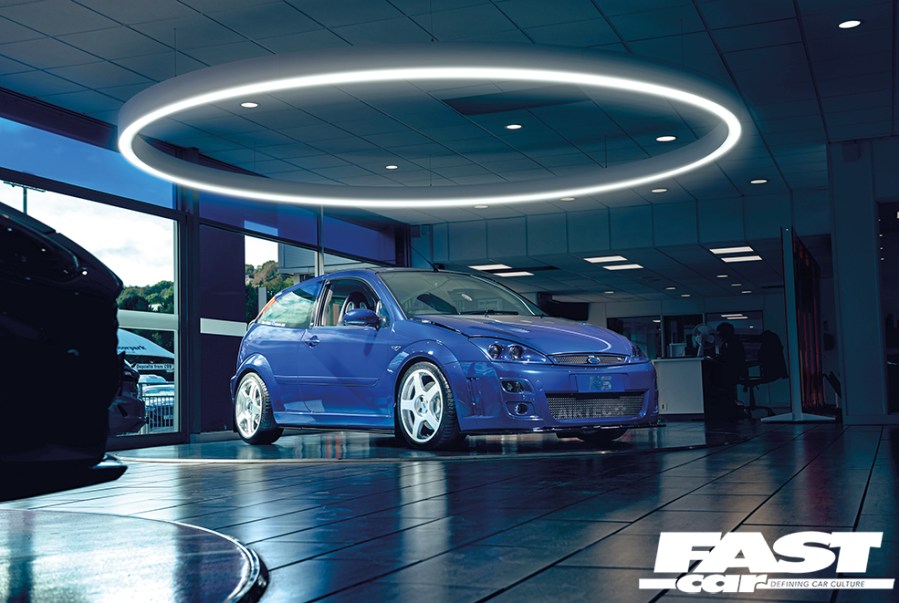 Steve Evans has poured countless hours and endless amounts of dedication into his concours Focus RS Mk1 – an effort that’s been rewarded with trophies, lots of trophies!

Concours competitions are a huge test; of precision planning, an eagle eye for detail and most of all, an unwavering dedication to the cause. To place anywhere in an event is a serious achievement, but to win two of the most prestigious Ford concours honours in the same year, is truly remarkable.

Well in 2019 this concours Mk1 Focus RS did just that – it not only won the Overall Gold Cup two years running in 2018 and 2019, but it won the RS Owners Club National Day ‘Car of the Show’ in 2019 too! “Winning National Day is our proudest moment yet,” smiles owner Steve Evans, “it’s a real historic trophy, and usually won by really beautiful older Fords… my wife Kate and I didn’t expect it, and we’re both still on cloud nine to be honest!” As we listen to the couple’s story, we realise they’re actually being very humble – many years of blood, sweat and tears built up to these well-deserved wins, and it all started with a Ford Orion… fitted with fish tanks! 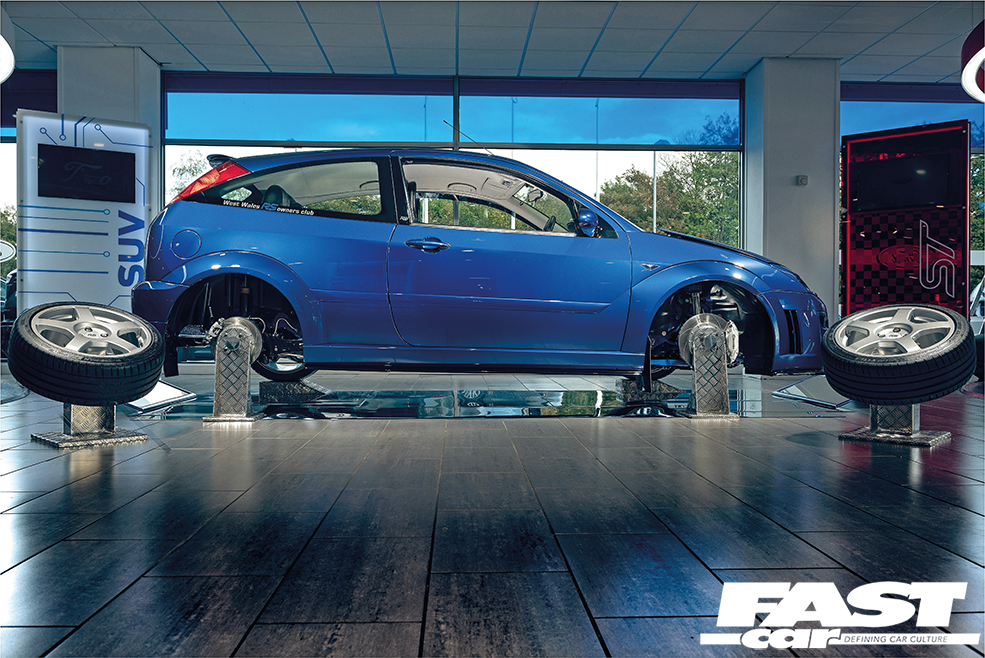 Back in the late ‘90’s Steve and Kate competed in shows and sound system sound-offs (remember those?), in a silver and blue Ford Orion. In those days the wilder and crazier a car was, the better, and Steve has always been able to come up with unique ideas to make his cars stand out. “It had a big ICE install in it, complete with fish tanks” he laughs, “we had great fun in that car and the silver and blue theme lives on with the Focus… but my wild ideas have calmed down a bit nowadays!”

Steve bought the Focus as a present to himself back in 2006, following the sale of his business. “We worked so hard for twelve years building a company up,” he explains, “and wanted something to show for it at the end”. They had always liked the shape and colour of the Mk1  Focus RS, so the search was on for a minter… but after twelve months of disappointing viewings he was getting despondent. “We looked at a few and even back in 2006 finding a good one was really hard,” he remembers, “eventually I found a 9,000 mile example up in Leicester, and we shot up there to take a look”. Steve was initially sceptical as the old boy had only owned it for a month, but further investigation revealed that an RS Owners Club member had owned it previously, so Steve gave him a call. “It all checked out, thankfully”, he continues, “so we bought it, and simply enjoyed driving it to shows with the only modification then being a Superchips remap”. 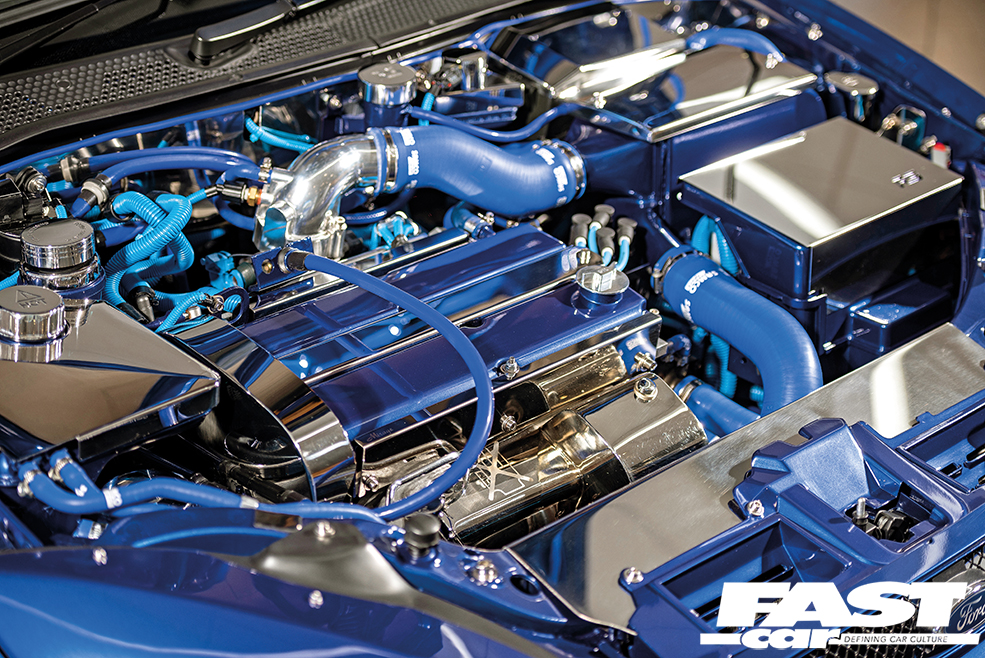 Over the next ten years, the car was driven, entered into Show and Shine events, and subtly modified as funds allowed. One such early modification were the Sierra Cosworth bonnet vents, which Steve and his paint man laboured over to make perfect, as surely they were a unique touch? “Our first show out with the bonnet vents was the West Wales RSOC show in 2013,” he smiles, “I drove in feeling proud, but to my amazement we found another two Focus RS’s at the same show, with the same vents!” An exhaust and air filter, under-bonnet colour-coding and US-spec rear lights were slowly added to the spec list, but it wasn’t until 2016 RSOC show at Castle Combe when things got really serious.

“We’d initially entered into the Show and Shine as usual,” remembers Steve, “but at the last minute decided to enter concours for the first time with the Focus RS Mk1.” The couple cleaned, polished, dusted and preened, and were feeling happy when Paul Cox judged the car. “We won first place in the “Novice – Post ’81 class”, he continues, “but when we asked Paul for a candid assessment of what could be improved, it dawned on us just how far behind the curve we actually were”. The experienced judge pointed out there was still dust in the seatbelt webbing stitching, dust behind the pedals, and there were little water marks in the roof gutters. Far from this putting the couple off, it actually spurred them on!  “The other concours competitors were so lovely to us that day,” remembers Steve, “everyone was so helpful and kind and welcoming – we not only got inspired by the levels they took their cars to but we also had a great time, so we decided to join the concours family for good!” 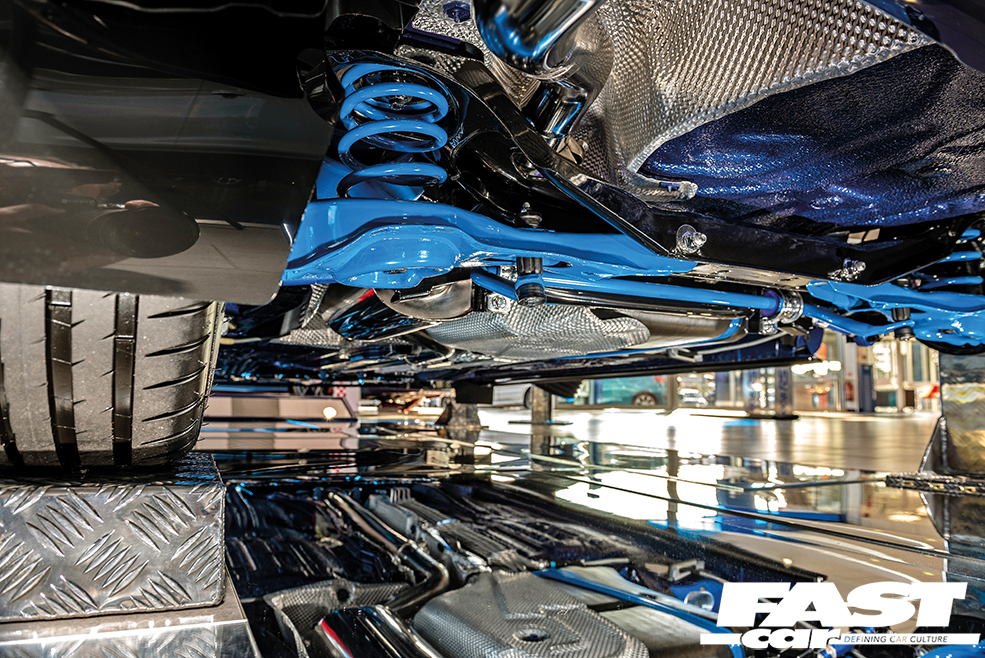 Over the next year or so lots of concours events were driven to, and successes enjoyed in both the Novice and Intermediate Modified classes. It wasn’t all plain sailing however, as one day Steve forgot to pack the hoover hose! “I had to run around the traders stands, buy a Sierra Cosworth coolant hose for £25, then gaffer taped it to the hoover”, laughs Steve, “with that time lost, I didn’t remove the wheels to clean them, and was marked down to second place because they were still a bit dirty… lesson learned!”

It was a slice of inspiration from another concours car, that took the Focus into a new stratosphere of cleanliness completely. “We saw Paul Stonebridge’s stunning Imperial Blue Escort Cosworth,” explains Steve, “the painted underside and colour coding blew us away, and we took the Focus off the road in the winter of 2017 to give it the same treatment”. The couple had just finished a new garage to house the car, and Steve spent countless hours in his new den stripping the underneath completely – “I only had two axle stands,” he laughs, “so I did the rear first and then the front… it was really hard work.” 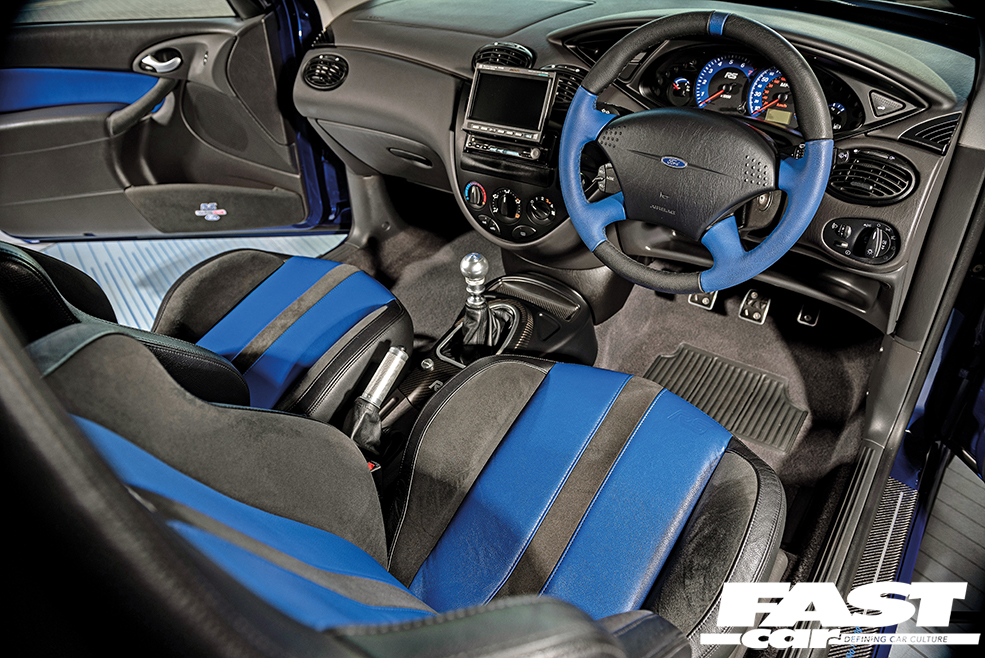 Starting with the rear, the subframe, fuel tank, brake lines, discs, and suspension came off and most of it was sent off to the powder coaters. At the same time, he cleaned and sanded the underside ready for paint – we all know that meticulous prep is what gets good results when it comes to paint finish, and Steve’s elbow grease really paid off… just look at it! “The painter came over and used Imperial Blue, then lacquered it and finished it off with GTechniq Crystal Serum ceramic coating. It made a huge difference and I couldn’t wait to start building the car back up again!”

New parts included a KW suspension kit, with Steve getting the springs powder coated blue to match the subframe. He also bolted in a Reyland brake conversion to the front end, had billet alloy fuel line clamps made by concours friend Mr. Cox, and proceeded to send all new nuts and bolts off for nickel plating followed by chrome plating. The final build up with all of the shiny new components really gave the couple a huge buzz. “It was coming together and looking amazing,” Steve remembers with a smile, “Kate polished the exhaust system to a mirror finish and we refurbished all the heat shields… not a stone was left unturned.” 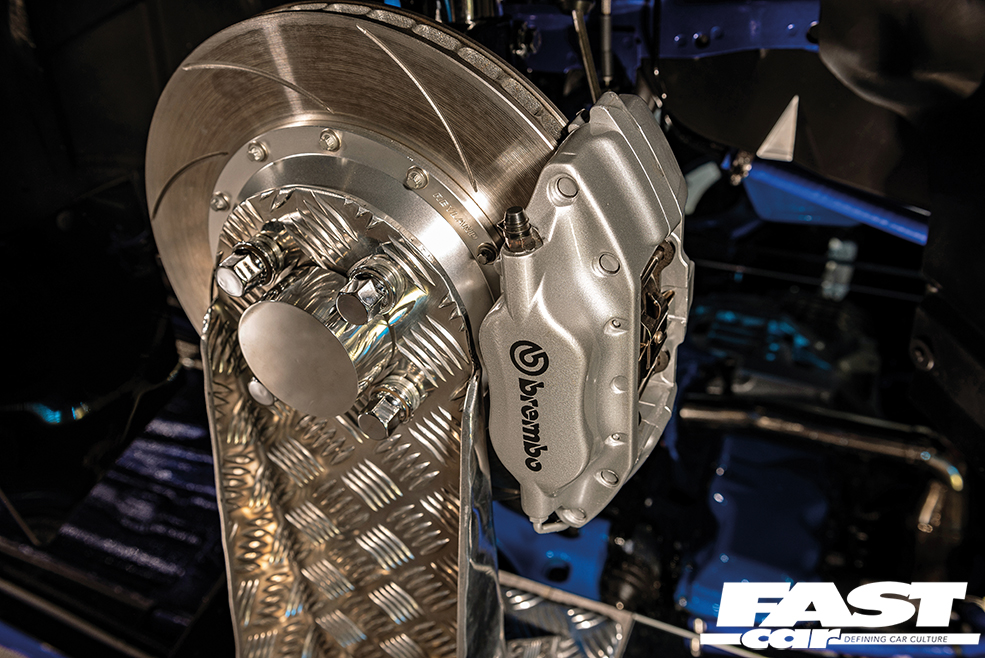 But after five months of work, when it was all finished, the couple stood back and realised the gravity of what they’d done! Their first competition was 9 hours away in Scotland, and the prospect of having to clean the beautifully mint underside regularly between shows, and maybe after rain, led to a big decision. “We made the leap to enter the ‘Expert’ class, and trailer the car to and from events” explains Steve, “which means we don’t actually get to drive the car at all nowadays”. To some, that may seem extreme but that’s one of the sacrifices to make at this level of competition. What I didn’t understand, was why bother doing all of the modifications if it was all about the condition? “In the Modified classes, each modification is actually worth an extra point,” explains Steve, “for example – we were losing points with the Ford headlights as they were worn and you can’t buy new from Ford any more. So we bought the twin headlight conversion – being new they can’t be marked down for bad condition, and being a mod they actually gain us a point.”

All of this meticulous thinking and prep paid off – just look at the ‘Honours List’ box for full details on how the car has been received by the concours scene. But what about average show-goers? “Some don’t like my style of colour coding, or mods like the headlights,” admits Steve, “but I have always been a bit unique with my taste. Most people do appreciate it though, and one of the biggest compliments was when a detailer came over at a show and said he’s never seen a car anywhere near as clean as this in his whole career… that was a lovely thing to hear!” 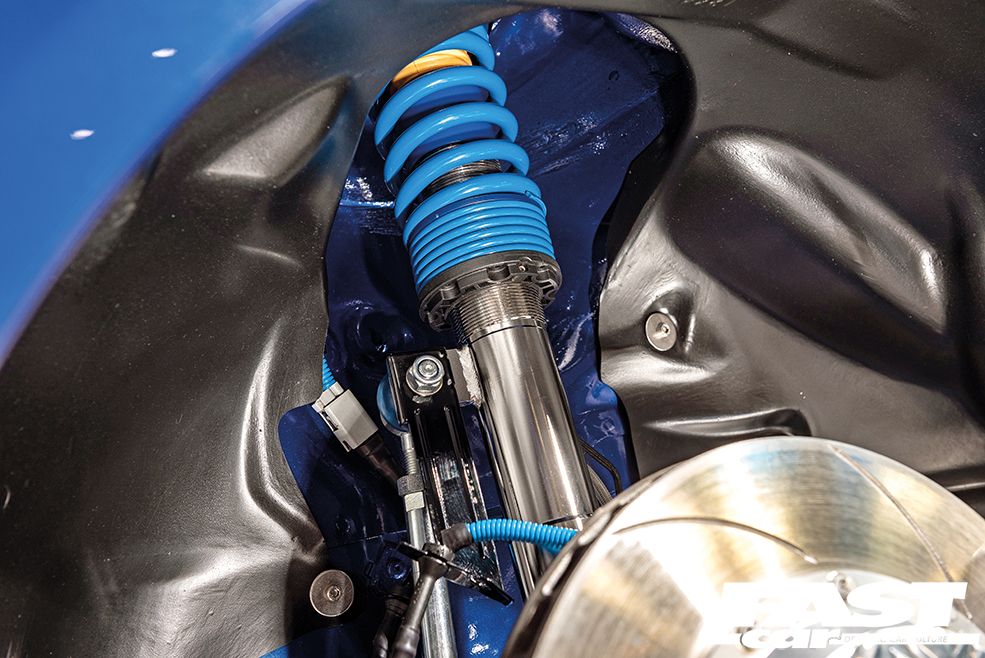 So after all of this success and fun with the concours family, what’s next for the car? “We’ve now bought a Mk2 Focus RS to get our driving kicks with,” he continues, “and the concours Focus RS Mk1 will get different wheels and tyres, a headlining colour change to something dark like the Mk2 FRS, and we’re going to install a sound system”.  Hang on, a sound-system? Please tell us there won’t be any fish tanks… “no fish tanks, or fish”, laughs Steve, “I promise!” 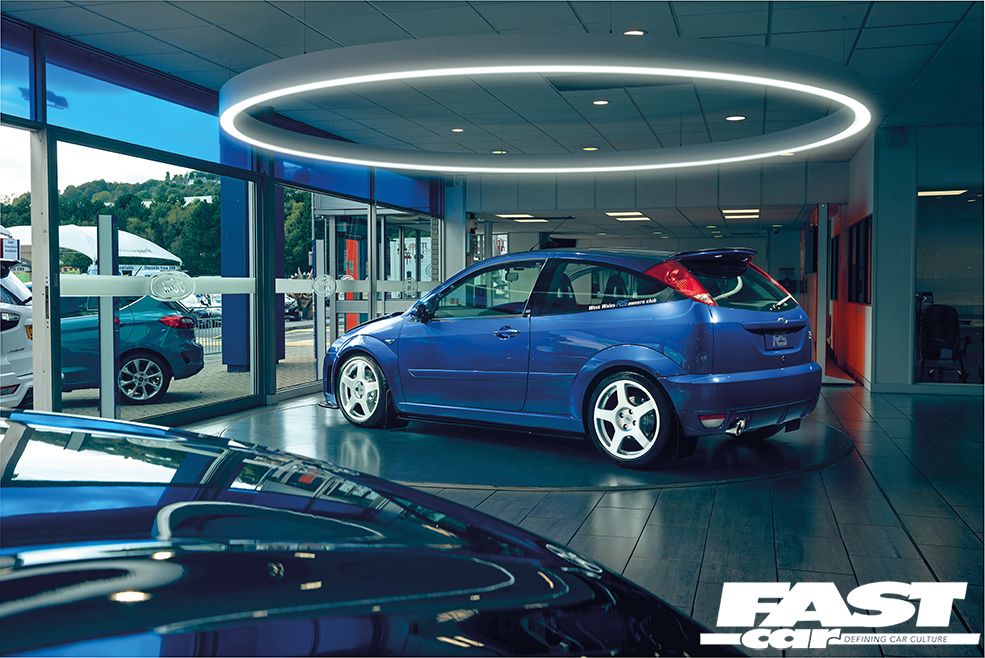