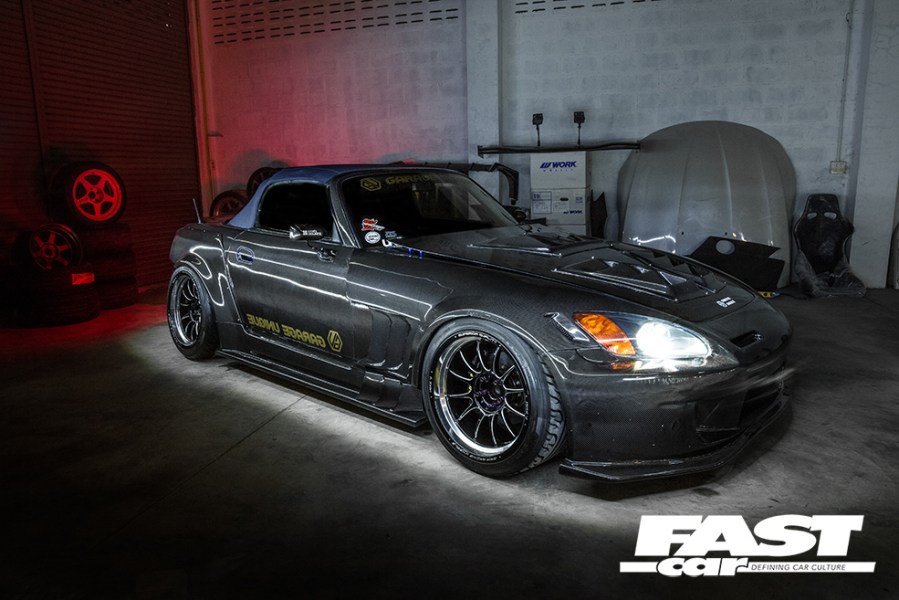 Tuned Honda S2000s are all about lightweight, NA thrills. But Supakorn Wongklahan’s savage example here takes this formula further than perhaps any other, thanks to its fully carbon wide-body and screaming all-motor powerplant…

The more eagle-eyed among you may have noticed some of the incredible cars we’ve been showcasing from the mean streets of Thailand over the past few issues, as our snappers continue their epic quest to unearth only the most awesome vehicles from all corners of the planet.

If these beasts are anything to go by, it’s safe to say this relatively small South East Asian country is packing an almighty punch on the global modified car scene right now. And a large proportion of this magic seems to be stemming from one tuning house in particular: Garage Unique, based on the outskirts of Bangkok and known for whipping up some of the finest wide-body JDM monsters known to man.

We’ve seen just what Garage Unique can offer, then, but it got us thinking: what on earth does head honcho Supakorn Wongklahan choose as his daily driver once he’s packed up his tools and finished tinkering with yet another super-exciting project in his day job? Thankfully, the answer is every bit as special as you’d imagine, as we’re about to show you…

Cue stage left, this rather brutal Honda S2000, a car which Supakorn has taken above and beyond perhaps what any other machine coming out of Garage Unique has gone through, in an attempt to showcase the ultimate form of what his company can offer. And with that normally aspirated engine cranked up to 11 and its lightweight body transformed into a carbon fibre work of art, this is one S2K we really wouldn’t want to mess with.

It’s taken several years in-between working on loyal customer cars, but Supakorn is finally happy with the way his rabid roadster now stands, which means we were eventually given the green light to ogle over every inch of its awesomeness.

We think it’d be rude not to start things off by taking a look at that sumptuous body, don’t you? Garage Unique is famed for creating fully bespoke wide-body conversion kits that are custom made for every application (hence the name of the company), and this time around is no exception. Although instead of the normal FRP components, Supakorn was after something a little more special for his own project. “Pretty much every body panel you can see from the outside is made from real carbon fibre,” he smiles.

Yep, as you might’ve guessed from the exposed weave effect that’s been carefully retained, everything from the new bumpers, side skirts, comprehensive vented wide arches and even the bonnet are all made from this lightweight composite – shedding countless pounds whilst looking seriously epic in the process.

What’s even cooler is the fact the car’s original blue colour is still shamelessly visible in places such as the engine bay and with the convertible soft top roof – giving the hot Honda a satisfyingly functional aesthetic that works perfectly.

The kit gives off enough extra girth to comfortably accommodate Supakorn’s wheels of choice – some 10.5in-wide multi-spoke beauties from local firm, GAIA Racing. Polished up in a dark chrome finish, they’re the perfect match for that moody bodywork. Keen to showcase as many components as possible from loyal local firms, the tyres are also from a proud Bangkok supplier – Splendid Tires – whose SD09 semi-slick offering has been creating waves in the Asian car scene lately for all the right reasons.

To capitalise on that newly formed squat stance, a set of adjustable TEIN coilovers are dialled in nice and low, with plenty of negative camber on each corner for the ultimate street-slayer vibe. It’s interesting to learn that Supakorn has opted for a static setup, as opposed to an air ride offering like a lot of his clients choose – and helps to explain a lot about how he intends to use his steed now it’s finished.

It’s something that becomes more apparent as you pop that vented bonnet up front, and marvel at what stares back at you. Refreshingly, there’s no massive turbo or whining supercharger to be seen, with Supakorn instead sticking to Honda’s all-motor ethos that ensured the S2000’s high-revving F20C engine was such a hit upon the car’s launch.

That’s not to say no work’s been carried out here though. Quite the contrary. You see, the whole 2.0-litre lump has had a full internal overhaul which sees forged components make an appearance inside the block, and a re-worked head up top for optimum response. Complete with a rare ARC intake, a trick fuelling system and a stunning titanium exhaust system that ensures air flows as freely as possible from manifold to back box, the result is a seriously healthy 270bhp from this compact package.

It’s little surprise to hear that this car is now a whole load of fun to pilot around the back-streets of Bangkok or out on track. In fact, it even drew the attention of a certain Keiichi ‘Drift King’ Tsuchiya on one of his recent visits to the country – the skidding legend soon jumping behind the wheels for some satisfying sideways thrills.

Drop yourself low into the compact cabin, and you’ll instantly see how that rapid street machine vibe continues inside. Take that driver-only GT3-style bucket seat that acts as such a contrast over the factory leather passenger offering – there with the unashamed task of providing more support to the lucky pilot from the new-found G-forces now on tap. It’s the same with touches like the grippy leather GReddy steering wheel, and that carbon fibre (surprise, surprise) gearknob from tuning house Mugen.

Some say ‘a race car can always be a show car, but a show car isn’t automatically a race car’. And that might just be the perfect phrase to sum up this aggressive build here from the talented Supakorn.

It’s been a long time since we’ve seen such unashamed functionality on a road-legal vehicle, and it’s this boldness that itself makes it such a joy to admire, even when it’s sitting still. When it gets moving and that howling VTEC motor take over, it just gets better and better…