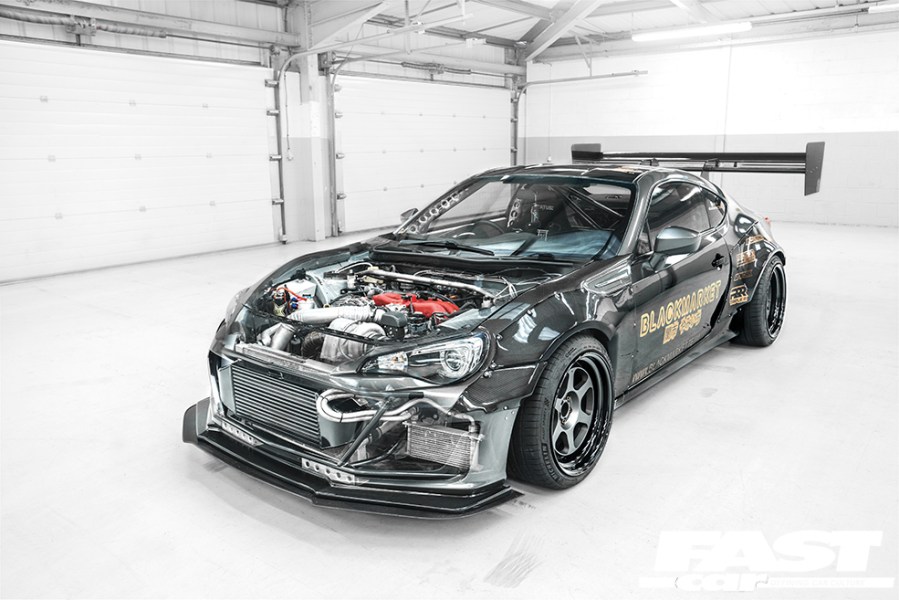 With race-car aggression, massive power and endless custom fabrication work, Alan Bennett’s boosted Subaru BRZ is a riotous clash of outrageous ideas. Time Attack is the ultimate aim, but impressively this thing’s been specifically engineered for the street…

“The goal has always been to make this car perform to the maximum of its capabilities.” It’s a strong mission statement, and it’s clear to see that Alan Bennett has put his all into transforming this 2015 Subaru BRZ into some manner of road-legal track assassin. But when you learn that this is the first car he’s really modified, perceptions are realigned from ‘Woah’ to ‘Seriously… woah!’. That one small adverb mightn’t seem significant, but it represents a colossal conceptual shift. He’s gone from zero-to-everything quicker than a slingshot dragster. “I don’t really have a history of modifying cars before this one,” he confirms, to the general jaw-droppery of everybody present. “I tinkered with my 125, changing the gearing for some extra speed off the line when I was younger, and slightly modified my Honda Civic when I was 17, but other than that it was this BRZ that set me off.” 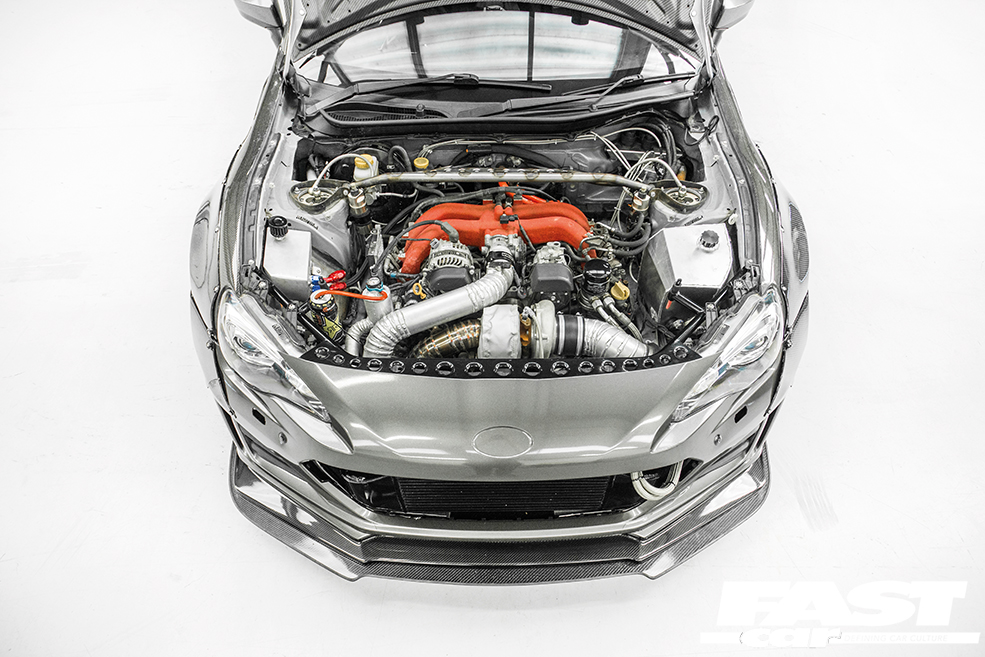 It’s an astonishing position, it really is. But when you consider Alan’s day job, the logic of all this starts to shuffle itself into order, to some minor degree at least. You see, his daily crust is earned at HORIBA MIRA (formerly the Motor Industry Research Association), and he’s involved in every stage of testing from setting up vehicles to fitting sensors, affixing and aligning cameras, routing winching systems and so on. This sort of endeavour provides an intrinsic knowledge of what works and what doesn’t on a broad variety of vehicles, and also means that he’s basically surrounded by petrolheads all day. Petrolheads with incredibly in-depth scientific and engineering skill-sets. So when it comes to rounding up a panel of experts to chip in with advice on a modified car build, you really can’t do much better than this. And, of course, they’ve got a wind tunnel…

So, why the BRZ in the first place? Well, as with so many hardcore builds, the seed was planted in humble fashion before germinating, sprouting, getting out of control, and trying to throttle everyone like some kind of demented triffid. “I just fancied a GT86 or BRZ, I’d liked them ever since they were launched,” he shrugs. “The added bonus was that the insurance wasn’t too expensive! And once TRA Kyoto/GReddy launched the Rocket Bunny kit for the car I was obsessed, I could really see the potential.” 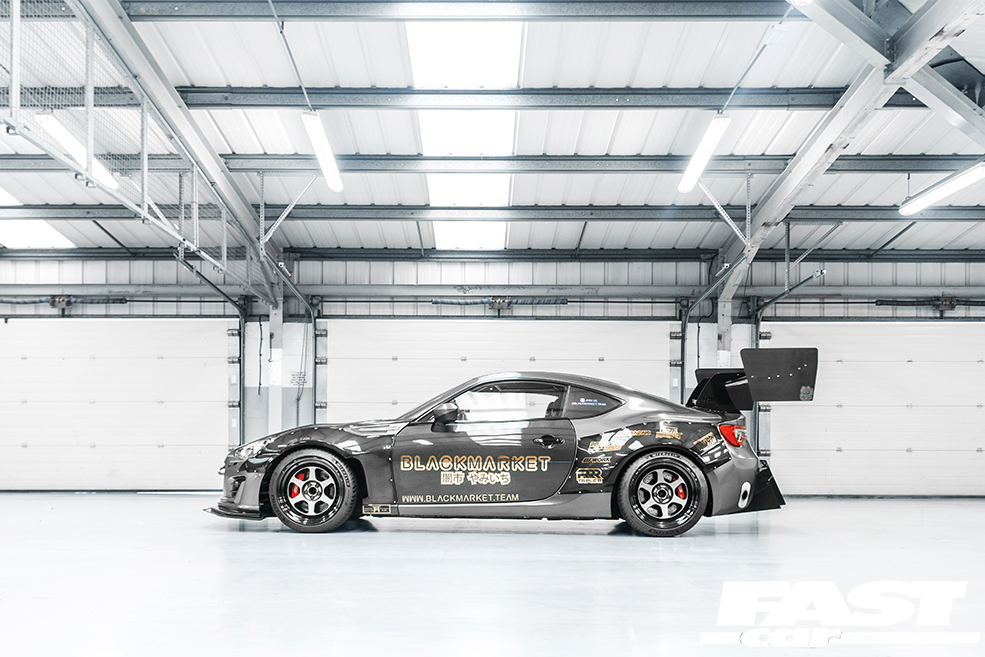 The truly intriguing twist in the tale comes at the point when Alan finds the car you see before you advertised on the used market. Naturally it was very different back then to how it is today, but it had been modified by a former owner. However, the old maxim about buying someone else’s project with your eyes open was borne out by the fact that it was, if we’re wholly honest, a bit of a dog when he bought it. “It was around the price of a standard BRZ at the time,” he recalls, “with some carbon pieces on it, a one-off paint colour, and a Litchfield supercharger kit. I thought that it was a good idea to snap it up as it already had the bits I’d like to do to the car… although hindsight is a wonderful thing.” The Subaru had quite a few bad points that the initial rose-tints had masked, and when the EML light came on after a week, alarm bells started to ring.

“The paintwork was a half-arsed job; they didn’t even do the underside of the bootlid, and the paint on the body was different depths everywhere,” Alan continues. “Most of the carbon parts were severely damaged from neglect and hadn’t been fitted properly, the bonnet was cracked from being slammed, and the supercharger wasn’t aligned properly so would shred a belt every 400 miles. Basically it was thrown together by the previous owner – the parts he chose were sub-par and the people he’d paid to work on it had done a shoddy job… I’d have been better off buying a stock one, as the money spent making it right and chasing problems would’ve offset the cost of buying all of the parts that made me want the car, with change!” 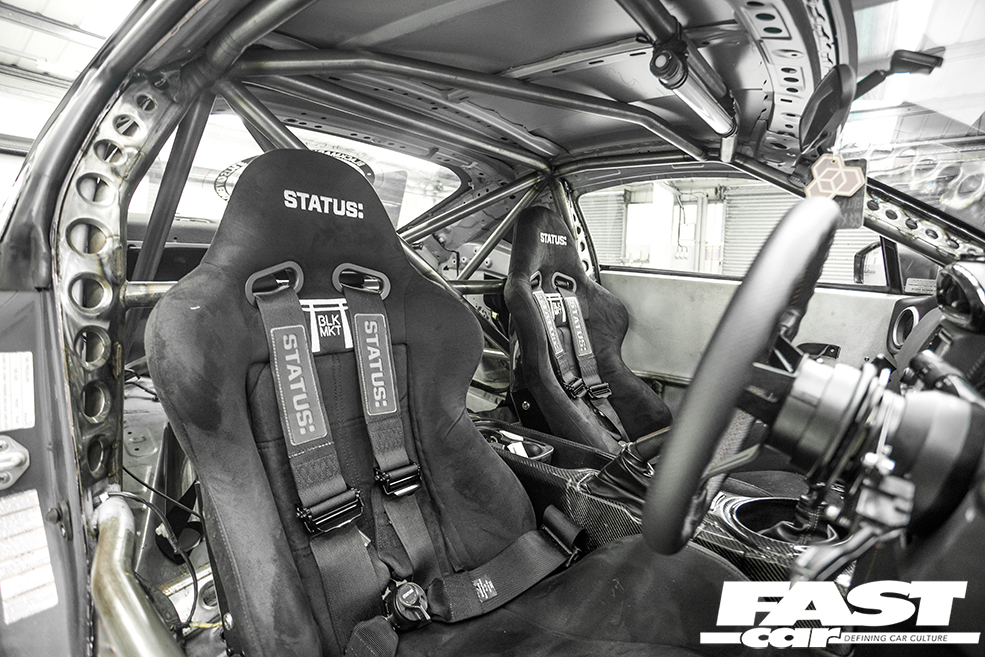 Like he says, hindsight is a wonderful thing. But Alan isn’t the type of guy to throw his hands up and give up on things when the going gets rough. No, he was adamant that the car be done right. Remember that initial brief, to ‘make the car perform to the maximum of its capabilities’? He rolled up his sleeves and set about that with gusto, pinpointing the right people to do the job to his exacting standards, and drawing up a shopping list of all the correct upgrades.

“Since my ownership, I have turned this car around,” Alan beams. “After having to fix all sorts of problems, even to the extent of having the block machined, it’s been a constant progression to a more serious and track-focused build – with the ultimate goal of it ending up in Time Attack. My go-to place for getting the car driving right and getting the power from it is Tuning Developments: you’ll struggle to find a nicer guy in the trade than Mike Jones. Between him and his brother they’ve got the know-how and the means to get any vehicle performing considerably better than when it arrives at their workshop.” The raucous spec of the FA20 motor is testament to this, not least because of the fact that the misbehaving supercharger is long gone, now replaced by Tuning Developments’ own turbo conversion. 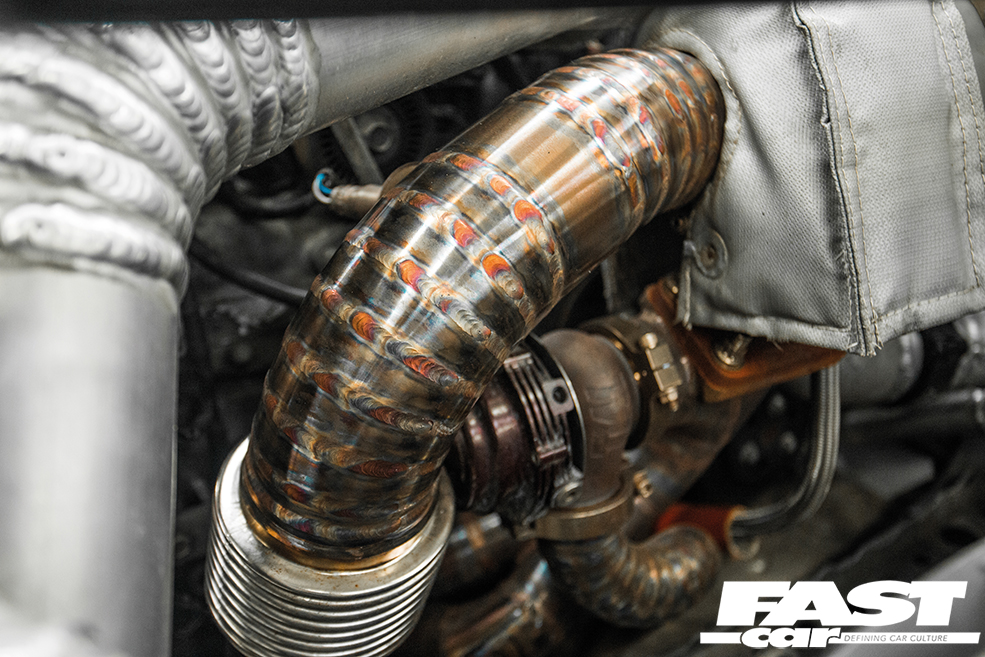 “This system is what drew me to the company in the first place,” says Alan. “With kits from other companies costing almost £3k more, Mike’s price was unbeatable – but it wasn’t just about the money. His setup is expandable, rather than maxing out a tidgey little turbo; the TD kit uses a massive billet Precision 5558 turbo that can put out more than 6x the load that the stock FA20 engine can take – again, another saving with buying a quality big turbo first rather than having to buy a bigger unit every time! Not only does Mike know how to make a car fast, he knows how to get that power down, so I also trust him with my alignments and suspension components.”

Peer past those fat WORK Meister L3 wheels and you’ll find a chassis positively brimming with race car prowess. BC Racing ZR remote-reservoir coilovers are joined by SPL adjustable rear LCAs, toe arms and traction arms, all crafted in lightweight titanium. The front end has been tube-framed and the arch tubs monkeyed about with, and the D2 BBK (6-pots at the front, 4-pots out back) is complemented by a full suite of braided brake lines – and that’s not just the easy-to-access ones, every single hose and hard-pipe has been replaced. The wheels themselves are also worthy of note, for their size alone. Unusually, the BRZ’s running a ‘square’ setup, with all four wheels packing the same dimensions: 11×18-inch, wrapped in 275/35 Michelin Pilot Sport 4 rubber. The secret to the fitment is all in the custom offsets – although we’ve been sworn to secrecy, as there were countless hours of R&D that went into making these hoops fit correctly and work effectively. Alan’s lips are sealed.

“As you can see, most of the work on the car is custom,” he enthuses. “There were hundreds of hours of fabrication, as everything on the car is TIG-welded, and all of the pipework is pie-cut rather than simply bent. My go-to for fabricating and custom work is Billy at HDF Motorsport – he sorted out near enough everything custom, from the rollcage to the tube front. For a young guy of similar age to myself, his work is unbelievable! After seeing the work he’d done on a friend’s car I had to get my BRZ to him for the cage, and initially that’s all it went down there for… but it quickly snowballed after we orchestrated a few deals, and we both got a little carried away!” 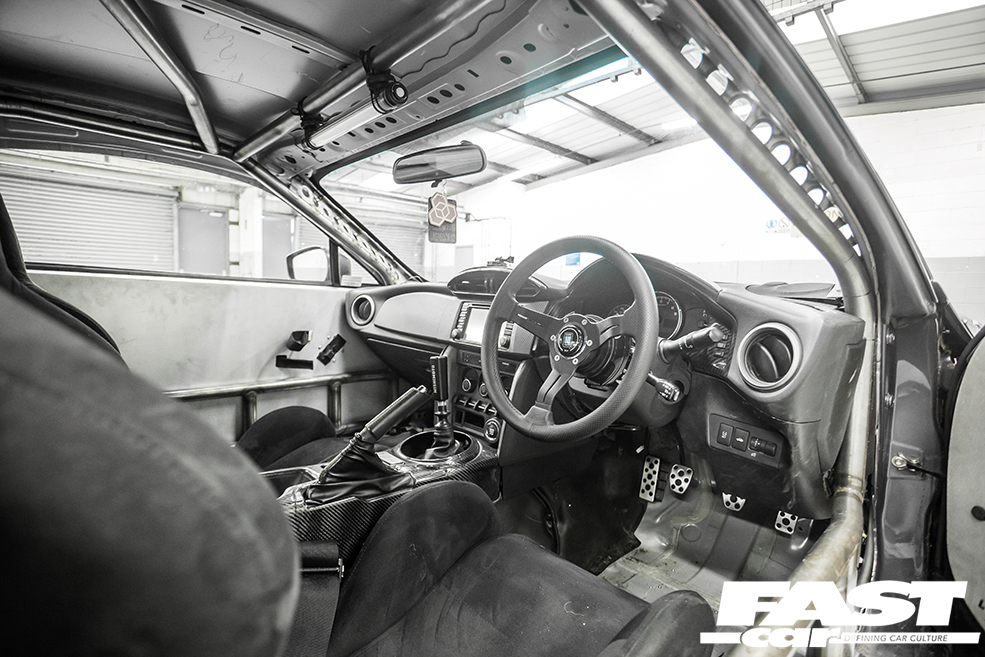 The interior is a place of pure function, not just with the rollcage, but by virtue of the fact that everything superfluous has been stripped out – soundproofing, airbags, the works – and Alan’s swapped in custom Status: Racing carbon Spa seats and harnesses, and of course the exterior means serious business. You can’t really miss that cartoonish rear wing (although it’s not as silly as some might think), and those long-held wide-body dreams have been fulfilled by the addition of a Fly1 Motorsports V1 wide-body kit working with customised Seibon carbon wings. Carbon fibre is something of a theme in fact, with Marsh Composites / MPH Fab providing the extended carbon splitter, side window deletes, GT bootlid and GT bonnet. Even the doors are carbon fibre! It’s attention to race-ready detail like this, along with custom touches like the HDF Motorsports rear diffuser, which proves just how serious Alan is about levelling-up to Time Attack one day. With that said, it’s clearly all the more impressive that this superlative
show-and-go sweetheart remains steadfastly road-legal.

There’s plenty more planned for the near future too. “At the moment it’s wearing an outstanding wrap from Syco Graphix, but the next job is to get it painted,” he says. “It’ll be visiting my friend Chris at Big Bear Kustoms in Daventry. He’ll also be tidying up some of the edges and details, and after that I’ll be chasing power. I plan to take this platform to the full extent of its potential, firstly to honour the time and development that went into the car, and secondly to show that you don’t need to do an engine swap to max out the power a stock R154 gearbox can take!”

Sounds like fighting talk to us. Of course, with a car as aggressive as this, you’d expect it to be a bit fighty. So don’t tell anyone that Alan’s actually a really nice guy, because a psychotic reputation goes a long way in Time Attack – particularly when your boosted Subaru BRz looks like it’s out for blood. 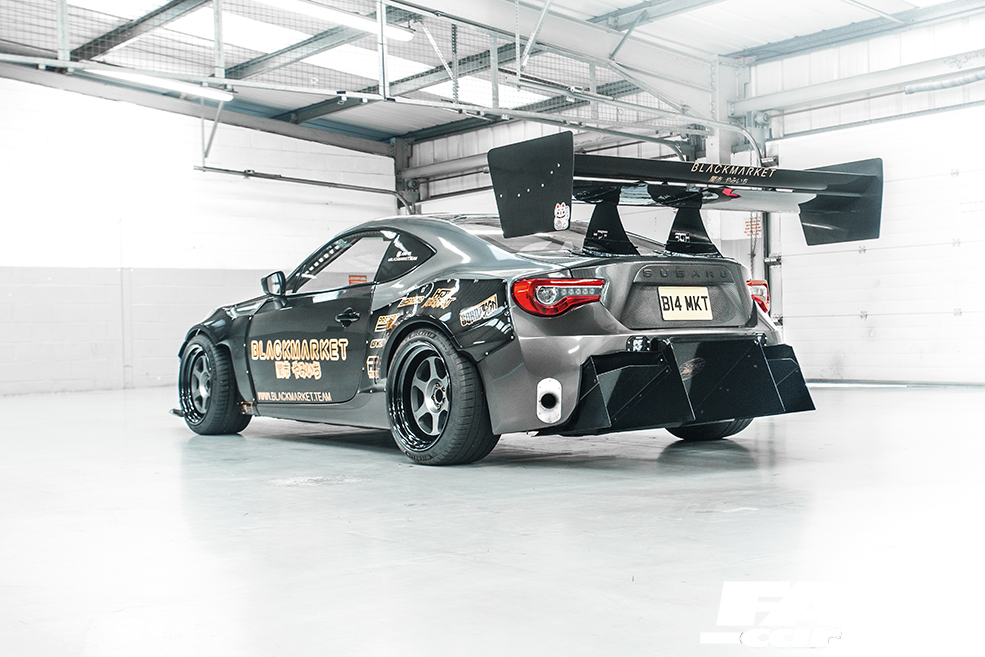