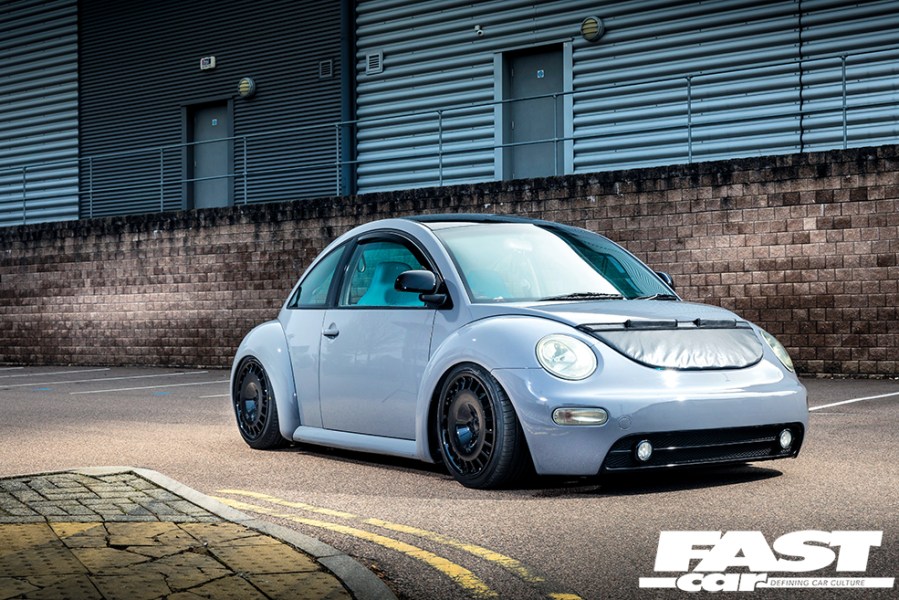 Midge is so deep inside the modding life, he builds feature cars by accident. See this bagged VW Beetle? This was only ever meant to be a daily runabout…

The new-wave Volkswagen Beetle has always been a bit of an outsider on the modding scene. Its cute retro looks ensured that it was a decent seller when the covers first came off back in 1998, and there was a decent range of specs and options available – but there’s no escaping the fact that quite a lot of the Bugs we see today are slightly battered yellow snotters with puny power and flower stickers gummed all over them. To those in the know, however, there was a very cool option in the form of the Turbo Beetle; that’s right, VW saw fit to drop a 1.8T in there and, while this wasn’t the most popular variant in the showrooms, it had huge potential by virtue of the fact that the Beetle is basically a Mk4 Golf underneath.

The fact that this car is an outsider fits in pretty neatly with the modding adventures of our Midge. He’s always been a bit of an outsider himself, you see. That may sound like a weird thing to say given that he’s been sat right at the core of the UK modifying scene for the last couple of decades or so, and has been a central part of Fast Car for the last seventeen years, but there’s something important you need to know about Midge: he really does not give one single solitary f*ck what anybody thinks. 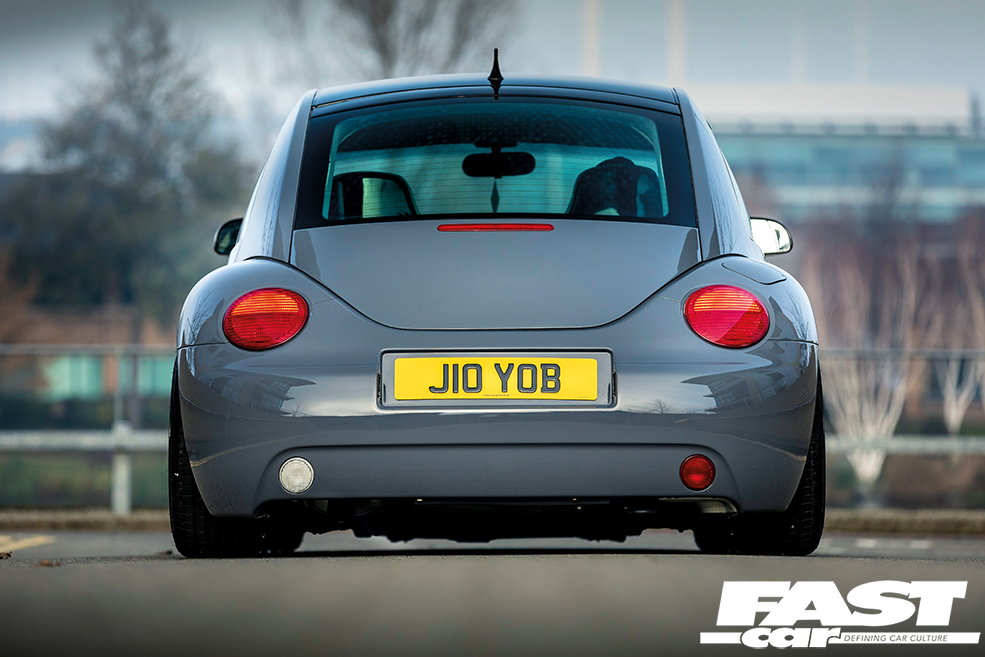 That’s not to say he’s uncaring, of course. He’s one of the nicest people you could ever hope to meet. It’s just that his modifying mantra has always been that you build your project car for yourself. There’s no point creating something to please other people; sure, it’s nice if folk like what you’ve done, that’s always a good feeling – but the whole point of modding a car is to do it the way you want it. He’s in it for the artistry, always has been. It’s not just a hobby, it’s a lifestyle.

“If it’s right, it’s right,” he says. “I’m not trying to push any boundaries with new ideas, everything just needs to be right for the car.” 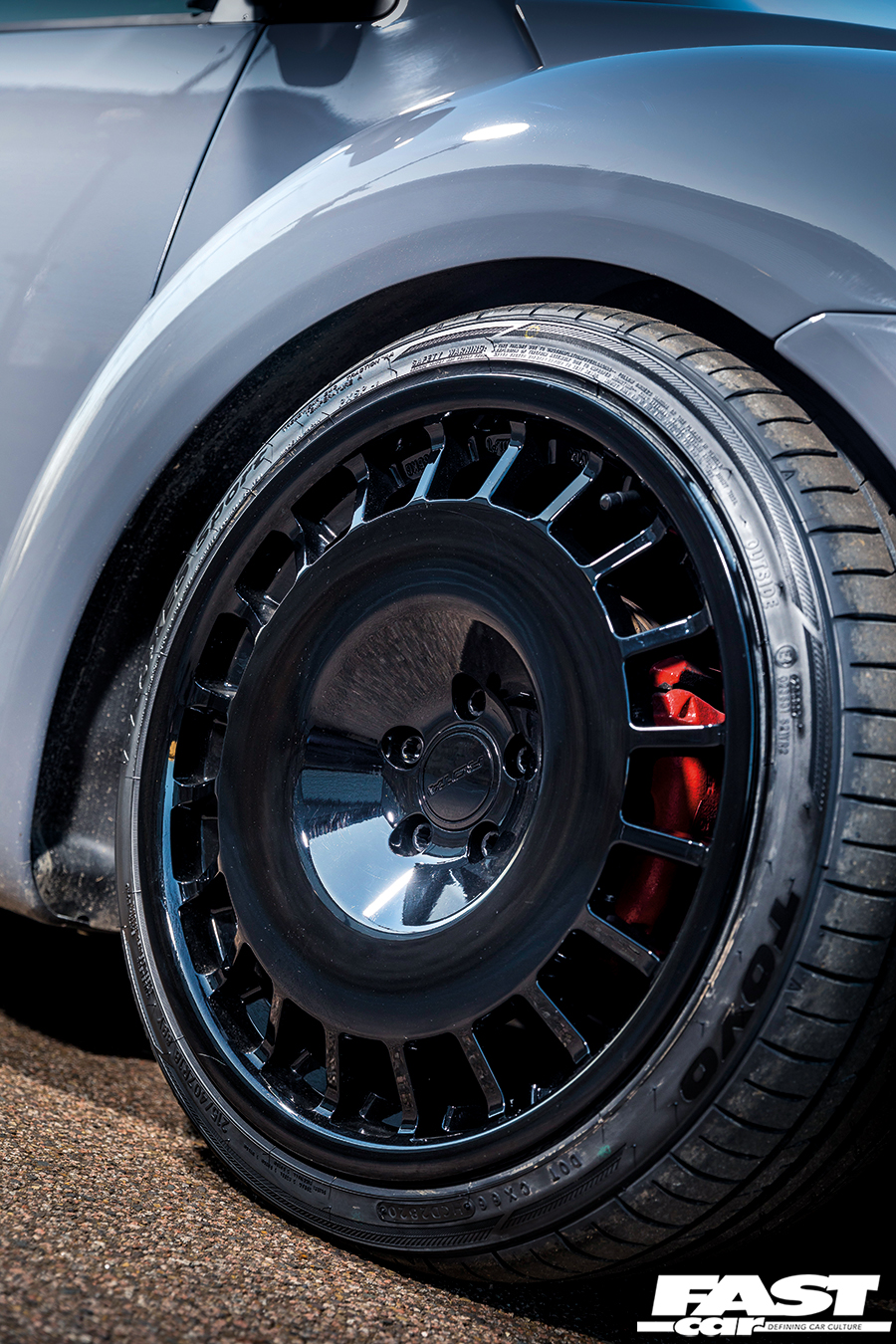 Bagged VW Beetle: Getting The Bug

This is very much a standpoint that he’s earned, as Midge has been building awesome cars since he was in short trousers. Well, he still does wear short trousers (y’know, because he’s short), but you know what we mean. Every car he’s built has been on his own terms – his own personal concept of what’s cool. And, as with so many feature car owners that have appeared in these pages over the decades, there’s one overriding notion that binds the community together: getting a bit carried away.

“The Beetle was never meant to be a show car or a feature car,” he ponders, casting an eye over his creation with the slightly dazed expression of a man who’s only just realised what he’s done. “I originally bought this car as a daily driver about four or five years ago; it was a decent low-mileage example, and you don’t find a lot of Turbo Beetles about – to begin with I was kinda thinking I’d make it match the TT, make them a set of twins.” 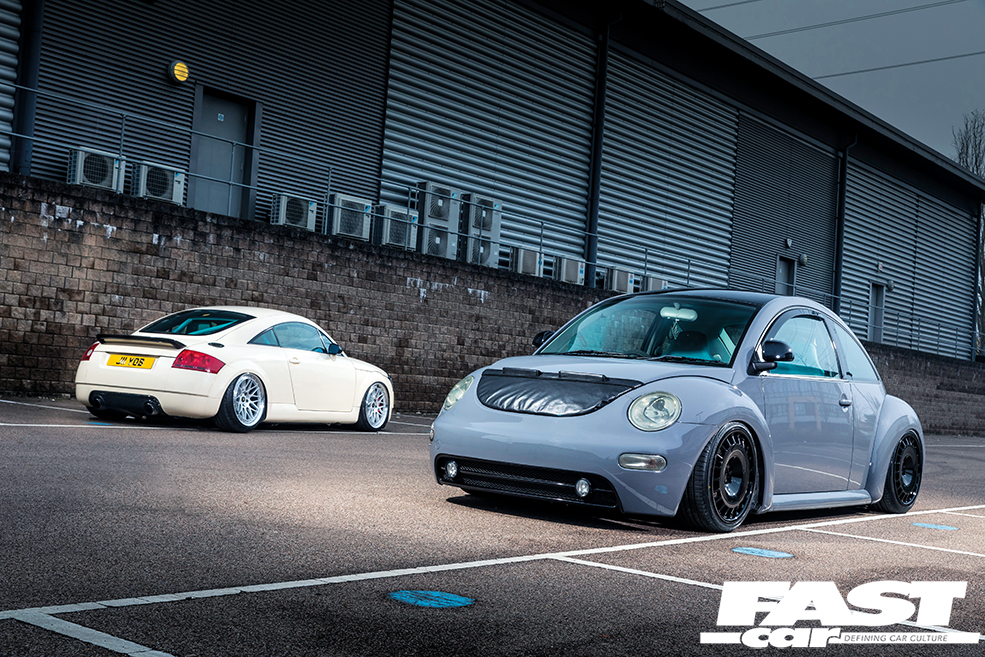 You’ll find the Audi TT in a few weeks time on the site, but the first thing you’ll notice is that it’s beige. Which the Beetle, er, isn’t. In fact, for a while this Bug was wearing some very cool rusty paint, the sort that you slap on and rough up to give the car a bit of rat-look without actually having any rust – all very tongue-in-cheek, particularly when you make your plastic bumpers all rusty. But as time went on and the list of mods got longer and stuffed with higher-quality equipment, Midge reached an epiphanic turning point. Quite simply, he felt that the car deserved better.

“I wanted to pay the bagged VW Beetle a bit of respect,” he reasons, and you can’t really argue with that. As a low-mileage example of a rare car, with all sorts of love and attention being paid to the specs, it was too good to be a jokey ratter. It was time to level-up. So Midge decided to pay a visit to Kwok, renowned paintsmith at Kode, to elevate things to the next level. 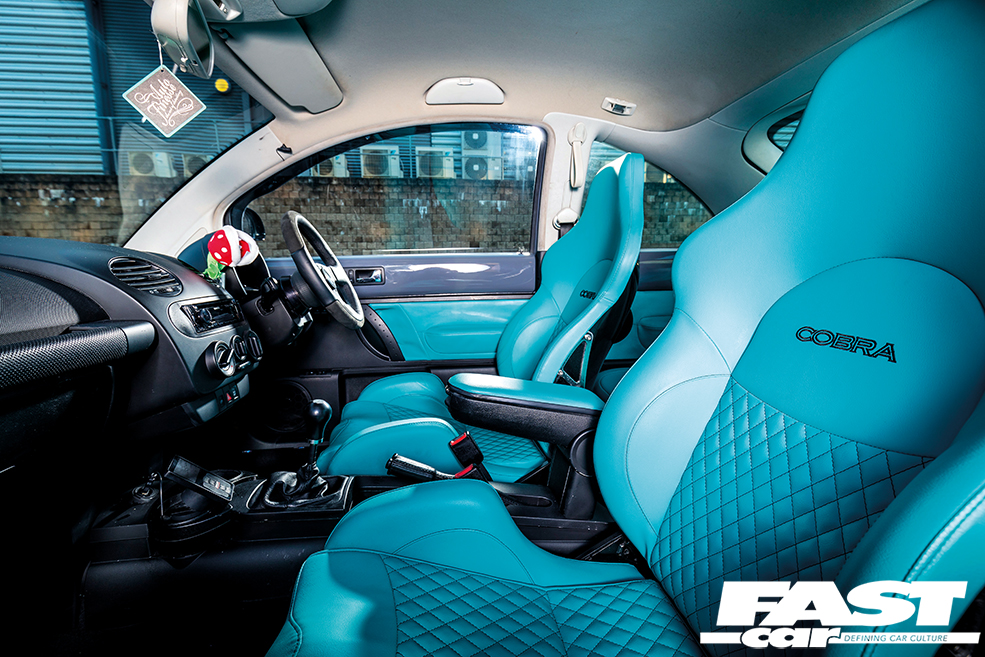 Before we talk about the paint, however, it’s important to acknowledge just how far the car had come. Having started as a cheapish daily, it was never the plan to, for example, fit a pair of Cobra Misano recliners and trim the whole interior in teal vinyl – and yet that, somehow, is where we find ourselves. And being the all-in sort of guy he is, there had to be a quality audio install too, because bangin’ installs is where it all started for Midge. High-end sounds have always been a key part of the equation. The magic wasn’t just happening inside either: under the bonnet, he was keen to get stuck in and make some improvements, because the 1.8T comes in a relatively mild state of tune in the Bug, and we all know how much potential they have. So now we’re looking at a RamAir intake, Forge diverter valve, custom EMP 3-inch turbo-back exhaust, Phantom Tuning ECU map and a few other tweaks and tricks to get it all singing from the Fast Car hymn sheet. Trust us, this little Dub sounds badass, and it ain’t exactly shy about lifting up its skirts and haring for the horizon.

Lifting is something it does rather well actually, as the little dude’s done right by the Mk4 platform and shoved a full Air Lift Performance setup in there, airing out over a set of Rota D154s which are just dripping in motorsport chic. You see, all the pieces are in place for a full-on build – this daily runabout morphed into a show-quality ride without Midge even realising. That’s just how good he is. So the rust paint, as wicked as it looked, suddenly didn’t seem all that appropriate. 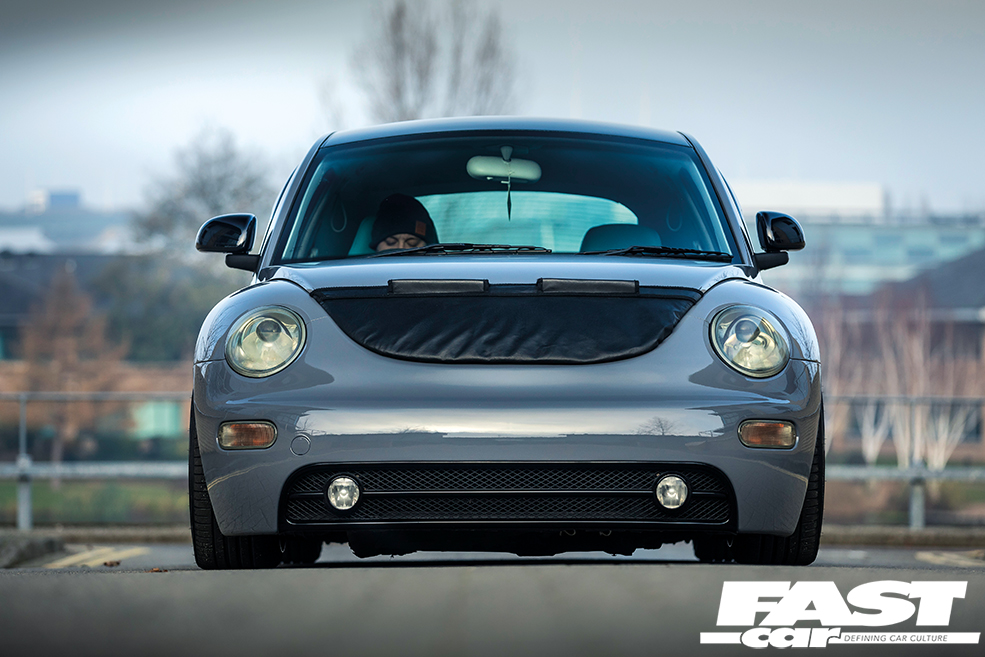 “I’ve known Kwok for years, and we’d always talked about him painting one of my cars,” he explains. “When I dropped the bagged VW Beetle off to him, it was really only meant to be for a quick blow-over – but by the time I got home he was already sending me pictures of the car with the wings removed and stuff. Those guys work fast! So it turned into a full repaint, and the colour is a VW shade – Pure Grey. I was thinking about going Nardo, but then Glenn suggested this colour and I knew right away it was the right one. Something a bit more sympathetic, more respectful to the car. I always wanted to give it a retro look, pay tribute to the history of the old air-cooled Volkswagens and bring it up to date, and this colour’s done that perfectly. In fact, I might even paint the TT to match!”

That’s just how quickly and easily these projects can change direction. Midge never sets out with an over-arching plan, he doesn’t buy a car and immediately draw up a mental list of what he wants to achieve with it and what the end-point should be. Because there is no end-point. He’s not a man who ever likes selling cars, unless he has to, they just keep on morphing and evolving as time goes on, because he simply can’t stop buggering about with them. A tweak here, a change there, and suddenly loads of stuff has happened without him really thinking about it. That’s just how elbows-deep in the scene our favourite little garage-hobbit is. He only meant for this car to be a daily runabout, and he’s built it into the UK’s coolest bagged VW Beetle Turbo totally by accident. It’s just how Midge rolls. 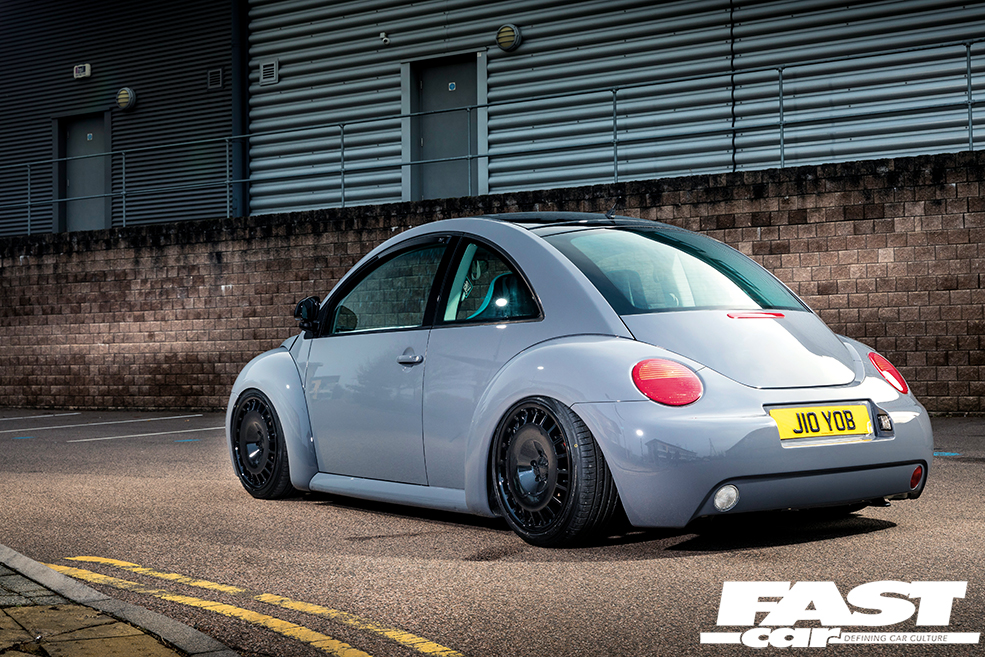