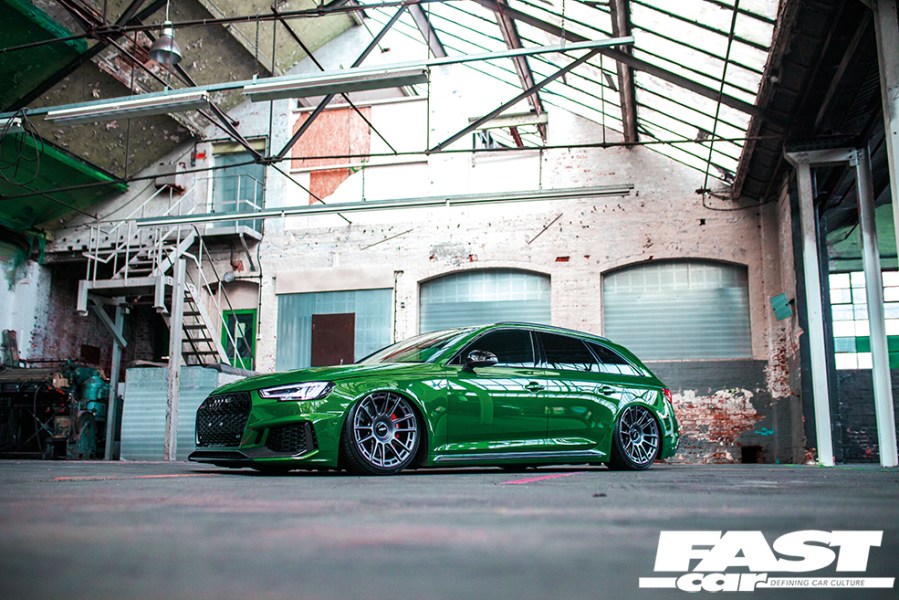 There’s something immensely cool about a fast estate car. And when it’s bright green with ludicrous horsepower like this bagged RS4 B9, it’s playtime every day…

A certain curly-haired TV presenter once made the point that all modern cars are essentially VW Golfs. There’s no element of surprise when it comes to quality or reliability, at least when you compare such things to the wildly varying margins of, say, the 1970s or ’80s; a Range Rover is a big Golf, a Toyota iQ is a little Golf, a Tesla Model S is a long electric Golf. When you think about it, this broad generalisation has been true for generations, albeit in more specific niches; in the early seventies, every saloon car was basically a Mk1 Escort – the Triumph Dolomite, the Datsun 510, the Fiat 124, they were all variants on the over-arching Escort theme, three-box shapes with a variety of powertrains from the utilitarian to the briskly entertaining. They could be reliable, they might not; they could remain solid, or they could quickly crumble to dust – but in every case, if you were to line them up in front of a visiting alien, they’d see several shades of what is fundamentally the same thing.

Nowadays, the scale has shifted a little. Cars aren’t all basically Golfs, the architecture of people’s aspirations has jumped up a couple of sizes: we’re not using the hatchback as the base point for everything, but the SUV. Take a look out of the window right now – what’s the ratio of SUVs to other bodystyles in your vicinity? Is it about half-and-half? People are going nuts for these needlessly large things, it’s a seemingly unstoppable trend. 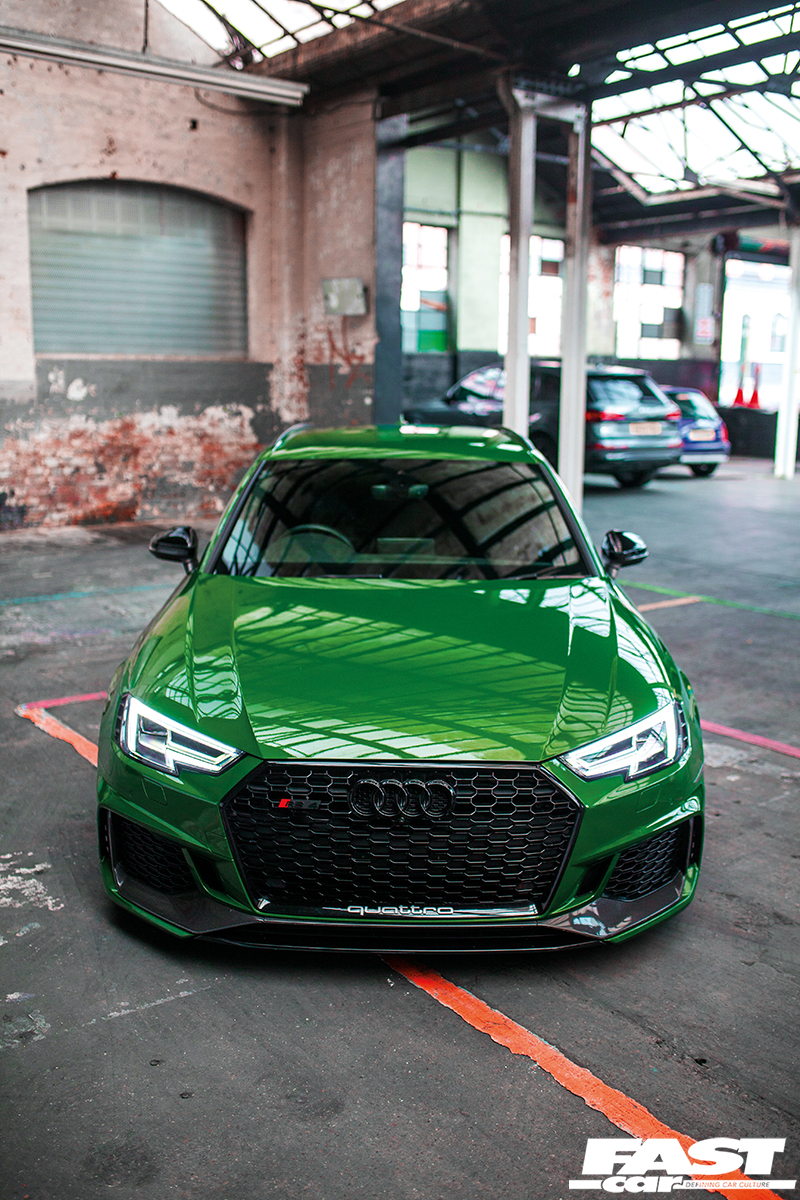 Thankfully, however, there are still those who can see that an estate car will always be infinitely more desirable than an SUV. Talvin Johal – aka TJ – is one such person. There’s no Tiguan or Juke in his crosshairs, he knew that the Avant life was the way forward to everyday success. And with the formidable package that the RS4 B9 presents, there’s really no argument to the contrary… we’re talking about a 2.9-litre TFSI V6 twin-turbo serving up 450bhp, a clever-fox 8-speed ZF Tiptronic ’box, and a Quattro chassis to die for. Keep your plus-size motors, here’s a practical family car which is also an absolute mentalist on demand.

Interestingly, TJ isn’t a middle-aged family man with who needs an estate car because he has a gaggle of children and a dog to cart about. Nor does he relish weekly trips to the tip to offload hedge trimmings and grass clippings. No, he’s a 21-year-old modding enthusiast, very new to the show scene, who bought a wagon simply because it’s obvious that they rock. 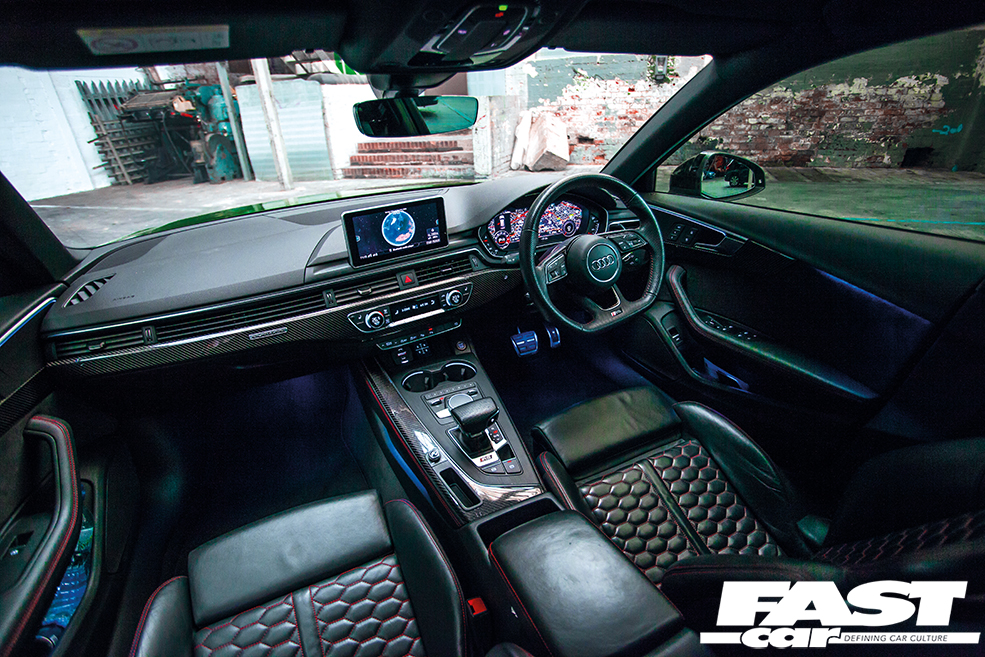 Yeah, we were momentarily blindsided by that too – quite a step up in a short space of time, isn’t it? This is clearly a man committed to fast-road thrills. “I moved to Newcastle in late 2018,” he continues, “and saw some bagged cars which made me want to bag my Focus RS!” Sure, we can see the logical progression there. This passion for modding, it’s highly infectious.

So if he was living his best life in arguably the best modern hot hatch on the market, what prompted TJ to level-up once again to the current-model RS4 Avant? “The insurance quote came up cheap, so it was a no-brainer,” he shrugs, with a grin. And the choice of colour is absolutely sublime too – in a sea of greyscale that’s washing over the nation’s high streets, Audi’s vivid and lustrous Sonoma Green is truly refreshing. 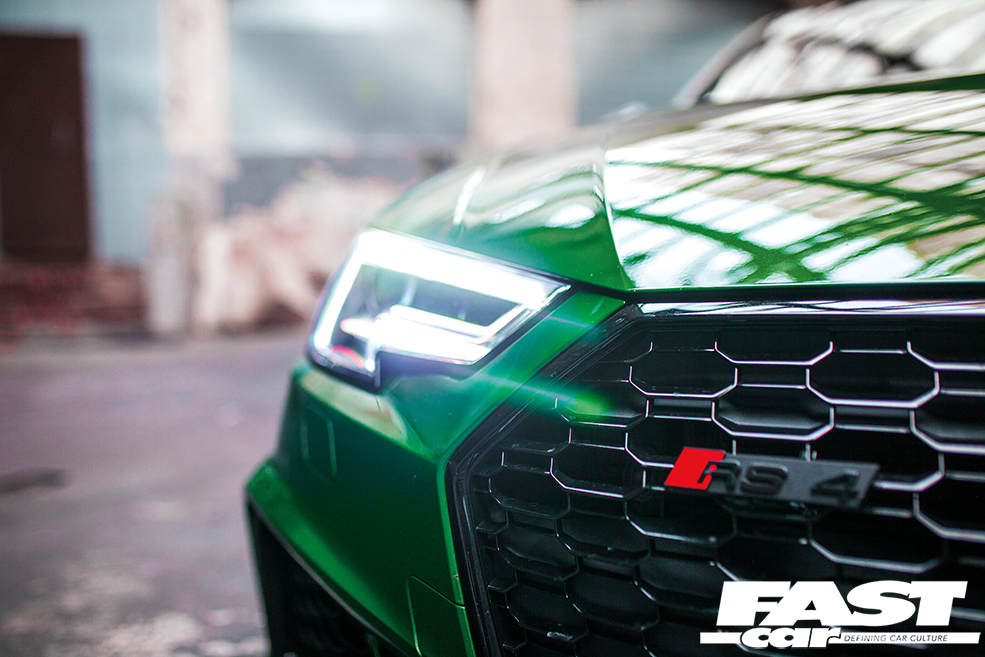 “I chose that colour because you don’t see it around very much – I hadn’t seen one modified and I wanted to be the first in the UK,” TJ explains. “It turned out that 2020 wasn’t the best year to buy a new car though! I found this car just before lockdown happened; nothing on the market was changing and it was really hard to find the spec I wanted. This RS4 B9 was one of only three Sonoma Green cars on the market in the whole country… but with only 14,500 miles on the clock and the desirable carbon pack option, it was obviously the one.”

TJ bought very well, despite trying circumstances, as an RS4 in this colour with the carbon pack is pretty much the winning choice when it comes to spec wars. And given his enthusiasm for bagged rides, it was obvious which direction this car would be heading in. That direction was downward. 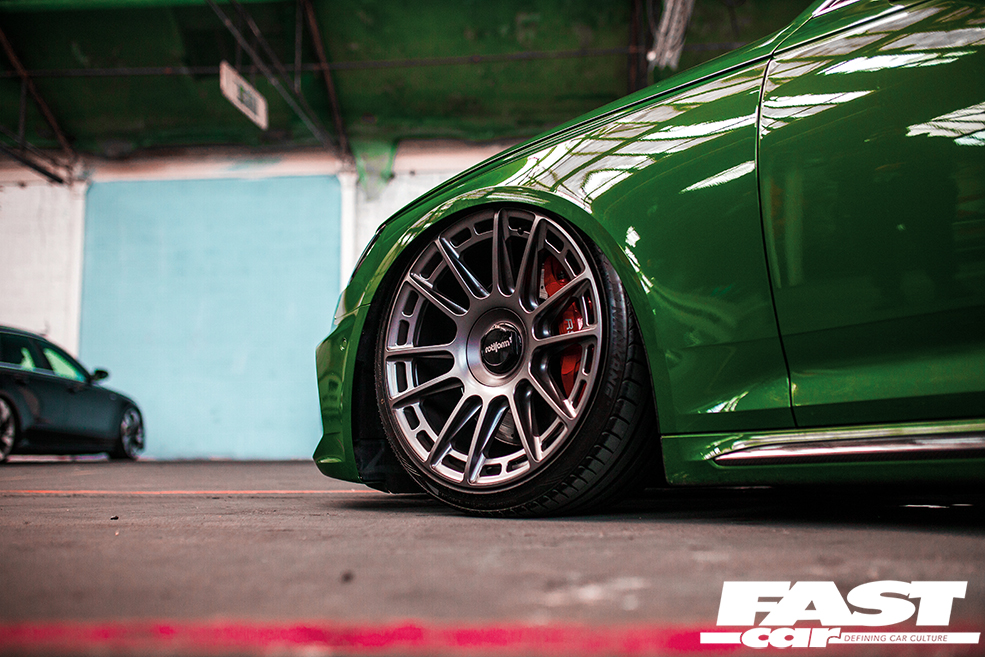 “All of the work has been carried out by Offset AutoHaus, the newly-started business set up by Steve Fraser,” says TJ. (Regular readers will no doubt be familiar with Steve, aka @s30bmx – we recently featured his bagged Gen-2 R8, and he’s got a stellar back-catalogue of Audi builds to his name.) “Originally I just wanted to bag it leave it at that, but Steve messaged me saying we can’t break the internet by just doing air – so we started thinking about wheels and went from there…”

The Rotiform OZR came recommended by the team at Offset AutoHaus, and TJ’s gone for a full-fat 20-inches of diameter, no messing about; squaring up at 10.5-inches wide apiece, they certainly help to give the bagged RS4 B9 an aggressive footprint. The arches are positively bursting at the seams when it airs out, and you really can’t argue with the contact patch on a set of 285-section tyres when you have the thick end of four-hundred-and-fifty horses to deploy. A set of custom three-piece forged Rotiforms are being knocked up as we speak, but for now the carbon-clad and extremely green formula is hot to trot in the day-to-day. 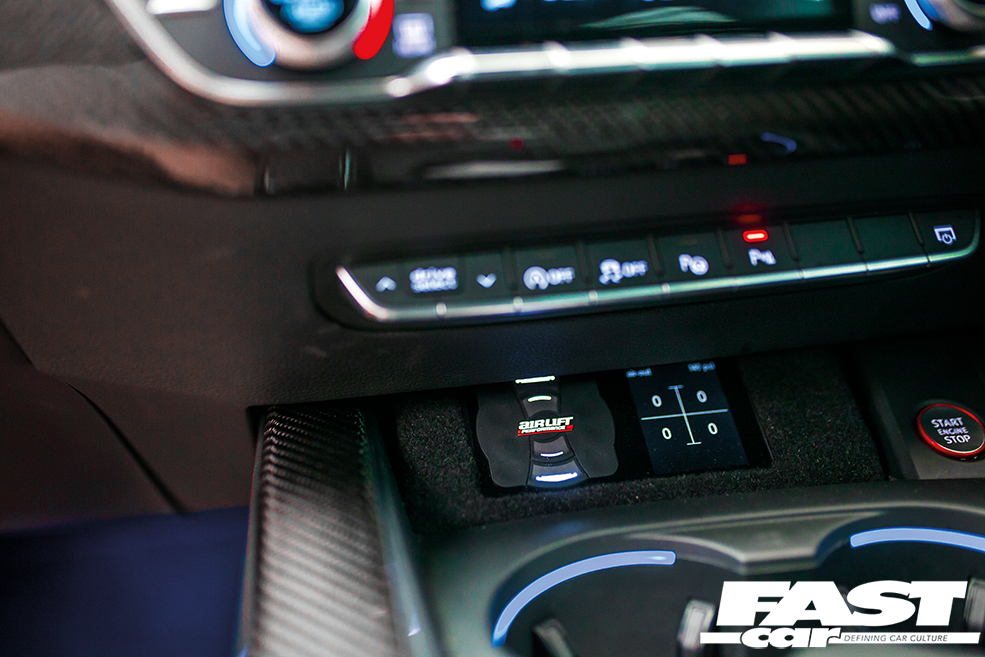 “It really is the perfect daily, and the perfect cruiser,” says TJ. “People’s reactions to the car are always the best – it’s a head-turner, no doubt due to the colour. In the sunshine it stands out from everyone, but starts to look really stealthy and sporty after the sun goes down! And with it being an estate and having the super-wide factory arches, it certainly has the best road presence.”

That’s the essence of the formula, really. The world may be turning SUV-shaped, but estates are just cooler, that is and always will be a solid gold fact. And if they’ve got a killer stance and more power than a Countach – well, that’s a pretty unbeatable proposition. It’s basically a bagged greenhouse with a rocket up its backside, and that’s the coolest way we can think of to blast out of 2020. 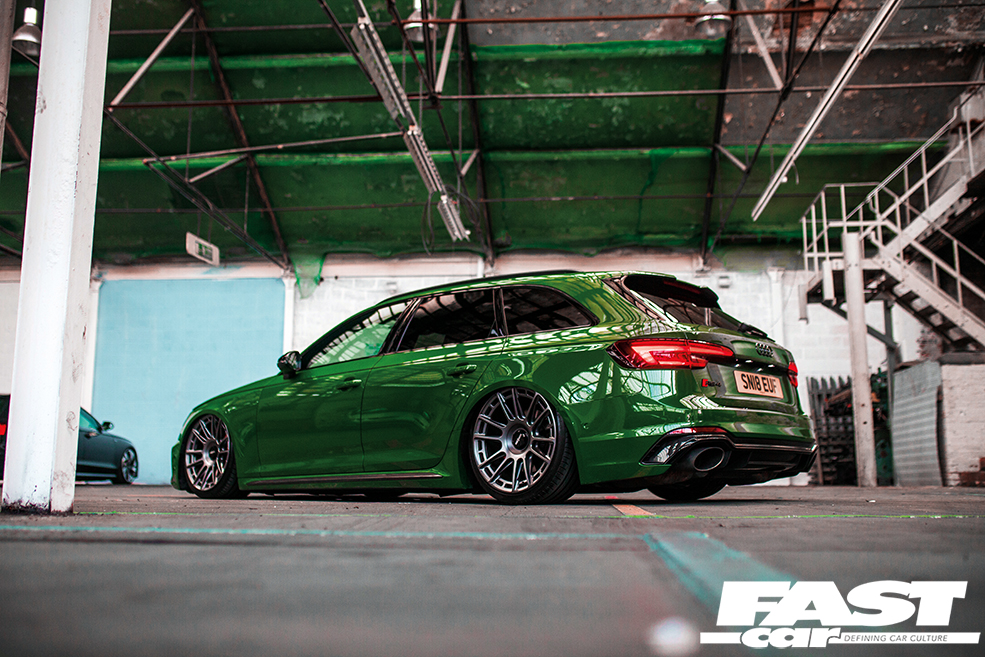