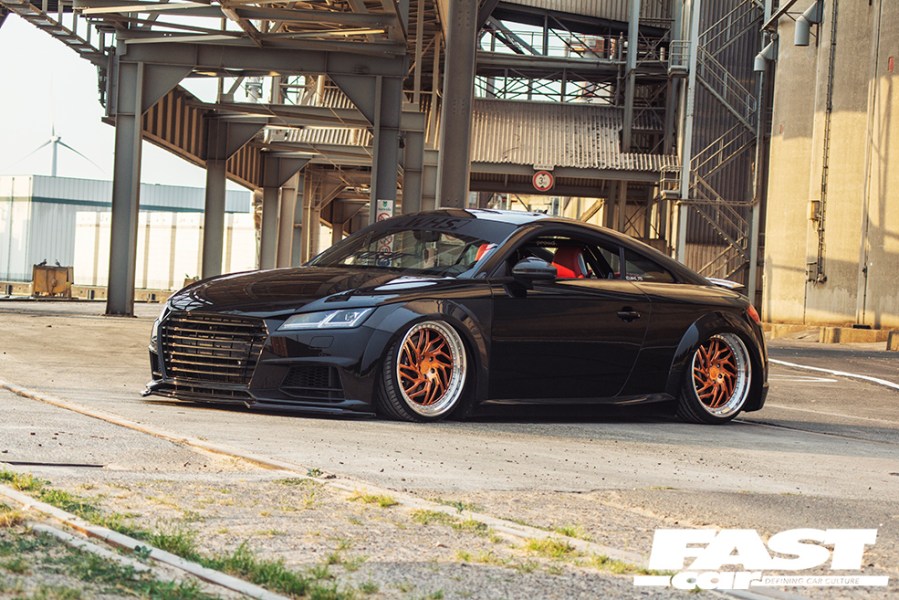 The Mk3 TT platform has been with us for a few years now, and we’re seeing some really impressive builds appear on the scene. Nick De Vreught’s 2016 TTS is one of our favourites – power, style, stance, this thing’s got the lot, and he makes it look like child’s play…

Your first car always holds a special place in your heart. More often than not it’s a clapped-out old snotter, something that you buy for a couple of hundred quid which lasts a few weeks before colourfully dissolving into an oily puddle of rust flakes and dejection. This is all character-building stuff, and invariably you’ll get a hankering for that particular model in the future when, years down the line, you’re a little more solvent and can afford to buy a proper one. If your first car was a £200 Nova that almost immediately exploded, it’s no surprise to find yourself twenty years in the future thinking ‘Hmm, can I rationally justify blowing five grand on a really nice Nova now…?’

For Belgian enthusiast Nick De Vreught, things happened slightly differently. His first car was rather better than the average sorry rot-box; a Mk1 Audi TT with a brawny 1.8T under that beguiling wraparound bonnet, which is a lot more impressive than most things you’ll find in the average sixth-form car park. Indeed, he loved it so much that, after a bunch of time had passed and numerous cars had been and gone, Nick decided to relive those halcyon days of youth in slightly updated form by buying himself a Mk2 TT. This all worked out very nicely for him, the fella was living his best life in the rakish coupé of his teenage dreams, when one day he found himself chatting to his parents about what his next car might possibly be.

“You like Audi TTs,” his mum reasoned, “so I bet your next car will be another one of those.” Like some manner of prophet or oracle, so it came to pass – Nick’s a good boy and he does as he’s told, and given that the Mk3 TT was starting to present itself readily on the used market, he set about finding one. And it was as easy as 1-2-3. “After searching for a few days I found a Mk3 TTS – the TT’s bigger brother,” says Nick. “I contacted the seller and went to view it that evening. As soon as I saw it sitting there on his driveway, I just fell in love with it.”

That first impression is all-important when you’re buying a car; if you know, you know. You’ve got to trust those instincts. Of course, it helped a lot that the seller worked for Audi Germany and was a true-blue enthusiast who’d cherished and pampered the car. With just 8,000km on the clock it was essentially like new, and so it was the perfect evolutionary link from Nick’s old Mk1, through the beloved Mk2, and stepping onward into the next set of adventures.

“This was actually my first full-on project,” Nick continues. “I’ve always lowered my cars static and changed the wheels, but I’ve never done anything like this. This is next-level.” It really is, and he’s keen to point out that initially things were never meant to go this far, and the plan from the off was to keep things simple and relatively stock… which is something we hear from about 90% of feature car owners! Once you get started, it’s hard to slow the impulses. We all get over-excited. You need to feed your momentum monster.

“I liked it so much as standard,” he grins. “But yeah, when you have all these bad influences around you, stuff’s bound to happen. I’d actually bought a set of KW V3 coilovers for it before I’d even bought the car, so I was placed to roll static right away; it was after a month or so that I had the idea to fit air-ride, and from that point onward everything changed!”

It was the legendary team at KEAN Suspensions who were drafted in to carry out the chassis makeover. This name should be familiar to regular readers; Kenny and Andy are basically suspension superheroes, and anything they don’t know about air-ride, static and hydraulic lows could be scrawled on the back of a postage stamp. If you’re in Belgium (or even if you’re not), these are the dudes to call. “I’d joined up with the Lowhouse Crew in Belgium, going to a lot of car shows together and they even have their own event, and at that time everything just turned around and I started seriously modifying the car,” says Nick.

“For a couple of months I found myself spending time after work down at KEAN, throwing ideas around with Kenny and Andy about what to do with the car.” After tailoring the plan to Nick’s specs and requirements, the fellas built a bespoke air-ride system for the TTS which uses Air Lift Performance 3P management, and the difference it’s made to the profile really is staggering – when the Audi airs out, angels weep and unicorns sing, rainbows appear and the world takes on a Disney-like filter. It’s that good.

This startling aesthetic is helped along by the rims of course, that goes without saying. After much deliberation, Nick’s opted for a set of JB1s from WatercooledIND in a robust and no-messing 20” diameter, finished in an on-fire and on-fleek citrus hue to complement the fruity upholstery within. “It’s really hard choosing a set of wheels for a project,” he says (echoing the thoughts of every reader out there – the struggle is real). “You have so many ideas and you need to check everything out; this choice was made because you just don’t see these rims very often and I wanted the car to stand out. The finish isn’t a normal copper, it has a couple of other colours mixed in so they change in different light and at different angles.”

Now, you could never describe a rims-and-drop TTS as ‘all show and no go’, given how rapid they are in standard form. But you’ll also be gratified to learn that Nick’s project isn’t simply a rims-and-drop exercise; he’s worked hard to ensure that ‘go’ and ‘show’ are on a level pegging, and this is attributable in large part to the expertise of DVX Performance. These tuning eggheads were commissioned to jumble up the Audi’s brains, applying a custom mix of the Stage 2+ remap along with a sportier reflash of the DSG software to turn the TTS into something really quite devastating.

In combination with a bunch of goodies from CTS Turbo – including their air intake system, high-blow turbo inlet pipe and outlet pipe kit – along with a Forge BOV and, essential for the noise as well as the ponies, a custom 3” downpipe and exhaust system, Nick’s now staring down the barrel of 417bhp. We’ve checked with a few motorsport engineers and been reliably informed that this particular performance figure is officially classified as ‘an absolute shitload’, so that’s a nice thing to tick off the list.

A custom rollcage and some extended shifter paddles further ramp up the race aggression inside, while Nick’s paid meticulous attention to the exterior upgrades to ensure that the car is unique, beautiful to behold, and tastefully done. Each addition has been stirred into the mix to enhance and augment the factory lines rather than radically rework them, and the parts list is longer than you may at first suspect.

Most radical among them are the front wings, which are wider items from Mücke crafted in carbon fibre, their weave lacquered and left exposed as a statement of purpose. These are joined by a custom-made carbon rear spoiler, and the section of the bootlid below it has cleverly been reworked in carbon fibre too. The mirrors are also crafted from the racy weave, and the nose enjoys a Xenonz/X-UK front grille and a Rieger Tuning lip. Rounding off the exterior mods is a gloss black diffuser, which artfully frames the bazooka-like quads of that custom pipework.

“My family think the car’s crazy,” Nick laughs. “And people in the street who see it rolling by are always watching like ‘Huh?’. It gets a lot of positive feedback at car shows, and the international ones are my favourite – my friends and I all drive different types of cars, and it’s great for us all to get together, hang out, and get to know people who appreciate cars like this.”

So there it is; it may not have been quite as simple as 1-2-3, but what Nick’s achieved here is to build a fabulous interpretation of the Mk3 platform, starting with the already-awesome TTS and taking it to strange and wonderful places. That Mk1 he had all those years ago sure has a lot to answer for.

Thanks:
“Firstly I’d like to thank KEAN Suspensions, who made this build possible in every way – not just the suspension, they supplied everything and gave lots of advice. I’d also like to thank DVX Performance for the engine upgrades, because in the last couple of months I’ve been in so many countries with the car for events and you need to be sure you can trust the engine when you’ve modified it! NBD Detailing for keeping the car smooth and glossy with products from Labocosmetica. The Lowhouse Crew for being not only a group of car lovers, but also very close friends. And of course last but not least, kevve.be for the amazing pictures.”