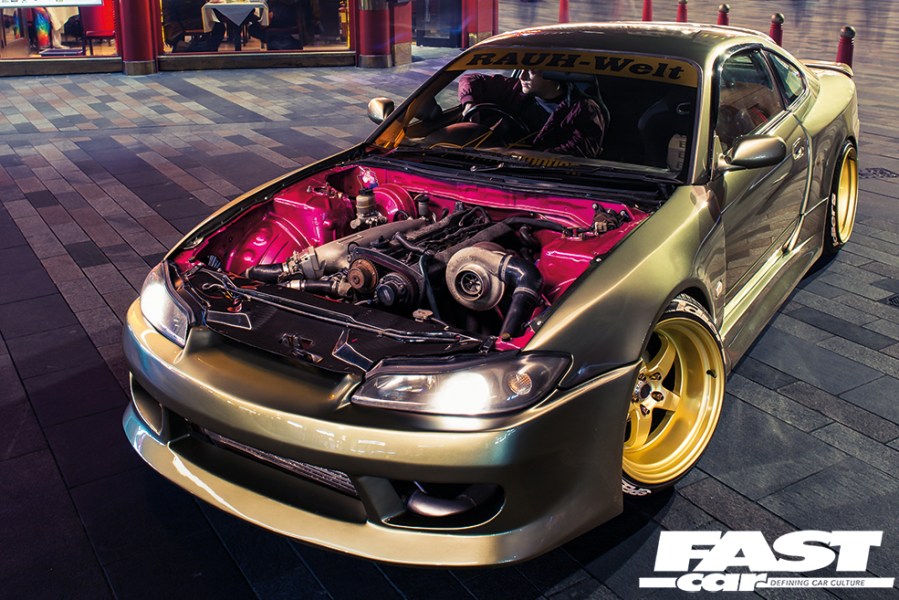 The moments when art and life intersect are what give reality its true character. The flash in time when Neo sees the girl in the red dress in The Matrix, the interspersed subliminal images in Fight Club, the bits where they talk to camera in Spaceballs, there’s a knowing acknowledgement of the link between fantasy and real life. This is true of videogame cars too: if you grew up playing Outrun, you’ll always be excited by the sight of a Testarossa out in meatspace. Children of Gran Turismo get more excited by the Mazda Demio than normal people do.

What you’re seeing here, then, is a real-world representation of a videogame car. Well, sort of. Vince Knight’s scene-slaying S15 is a shimmering vision of Need for Speed fantasy – except that it’s obviously not made of pixels. It’s made of pure awesomeness.

But before we delve into the gaming connection, let’s look at the original impetus for crafting this fabulous machine: RAUH-Welt. Now, for some it may seem a little jarring to see this iconic name plastered across the sunstrip of a Nissan. After all, this is a brand most commonly associated with widebody Porsches, right? You’re certainly thinking along the correct lines, the back story is pretty interesting: Akira Nakai first came to automotive prominence on the drifting scene, as part of the Rough World drift crew. His satin black Toyota AE86 on gold Watanabes became an icon of the tuning world, and a chance encounter with a 911 in the late 1990s set his mental cogs whirring; a damaged 911 came into the bodyshop where he worked, and he immediately saw the potential.

Before long, he’d purchased his own 911, a 1985 930, and set about making it unique. That car, named ‘Stella Artois’, is the build that established Nakai-san in the modifying firmament; fusing the colour scheme of his drift AE86 with the ultra-wide-arch look he pioneered for the 911, it’s become a legend. Ever since, he’s become a tuning master for hand-crafted widebody 911s. But with roots in drifting, he loves a hachi-roku or an S-chassis as much as any of us.

“I was always in love with the S15 built by RAUH-Welt, and this was a big inspiration for my build,” Vince assures us. “I’ve only had two cars, my last being a Honda Civic EK that was on the cover of Fast Car in 2011. The Honda was my first car from the age of seventeen, but I always had a love for Silvias – I was just too young to afford one!” When the right S15 finally appeared for sale – a blue car over in Ireland, with stock engine and interior – it was duly shipped to Blighty so Vince could roll up his sleeves and get to work.

So what of this RAUH-Welt S15 he cites as inspiration? Ah, this is the stuff of tuning folklore… something crafted almost fifteen years ago now, with Nakai-san taking care of the aesthetics and the car’s owner (and RAUH-Welt employee) Masuda-san reworking the oily bits into a street-legal track beast. The 400bhp SR20-engined rev-monster has become a sort of poster boy for how to do an S15 properly, with its focused mechanicals, subtly widened body and aggression in spades.

Vince’s car isn’t a replica or a pastiche though, it’s a loving tribute to a legend that employs plenty of his own ideas to ensure that it stands alone as a complete 2019 vision of what the S15 can achieve. For starters, you won’t find an SR20 under the bonnet. No, he’s swapped in an RB straight-six from the bigger-brother Skyline, which is a bold play in anyone’s book. Specifically, it’s an RB25NEO, the later variant of the 2.5, to which has been added a BorgWarner AirWerks S300SX turbo on a 6Boost T4 top-mount manifold, and that’s a pretty forthright way to behave.

You’ll also find hugely upgraded fuelling courtesy of J’s Garage 750cc injectors and Walbro 340 pump, working in harmony with a sodding great intercooler and numerous other tricks – it’s all governed by a Link G4 ECU, tuned to deliver a reliable and super-strong 504bhp and 450lb.ft. Impressive stuff. Naturally it’s running the RB25 transmission too, with a Nismo GT LSD Pro 2-way diff out back to allow those boisterous skids that Nakai-san would be so amused by. And the chassis? That’s got playfulness for days, with MeisterR Zeta-CRD coilovers, adjustable tension rods, adjustable camber arms and adjustable rear toe arms – adjustability is very much the watchword, because when Vince does things he does them properly. This isn’t a show queen, it’s built to be driven daily.

“In 2015, film-maker and photographer Bryn Musselwhite got in touch saying Need For Speed were filming their cutscenes for the new game, and they needed a RAUH-Welt-inspired S15,” Vince recalls. “In the game, my car belongs to Amy, one of the main characters, as she builds it to impress Nakai-san. I got to meet Nakai-san during the shoot, and was given the thumbs-up from him to keep the sunstrip!”

You see, this car is a bona fide videogame hero – when you see it in the rolling scenes that intersperse the gameplay, that’s real-world Vince and virtual Amy working hand-in-hand. This isn’t to say the car is happy to exist solely as a virtual showpiece, however. With the amount of work Vince has put into making it quick and agile, in tribute to the original RAUH-Welt S15’s spirit, he’s keen to use it at any and every opportunity.

“The car was built to be aggressive, but suitable for road use; low, but manageable for speed bumps; fast, but reliable, with a full interior,” he explains. “I can hop in and drive four hours back to Devon without a worry, or a headache! Being my only car, its main use seems to be when I need to get around London – you’ll find me stuck in traffic, lugging camera equipment in the boot…! I can’t make a journey without people taking interest, it’s not the sort of thing you often see about in London, I think. It’s constantly dying to stretch its legs though, so when there’s the opportunity it does! In 2016 I took it on the Gumball 3000 to Romania and back and it didn’t skip a beat – showing up some of the supercars along the way.”

As a cinematographer for film and TV, it was perhaps inevitable that Vince would create a car which so brazenly embraces the ties between fiction and reality, and the results are truly startling. It’s a knowing wink to the camera, an ‘A113’ reference in a Pixar movie, a barnstorming final scene with one eye on the wrap party. This subtly wide-bodied and amusingly powerful S15 is a bona fide videogame car that you’ll find crawling down the Kings Road. And then, like Keyser Söze – whoof! – Vince is gone.

Thanks:
“Built by Richards Racing, engine supplied by JDM Garage, fabrication and tuning by J’s Garage, bodywork by Lewis Bustin.”