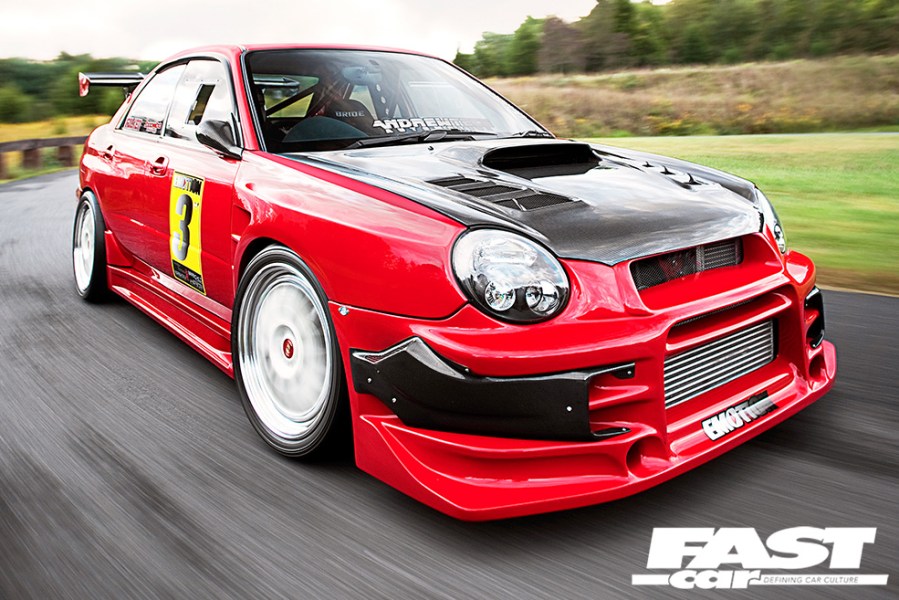 Welcome to this week’s FC Throwback, where we hit the archives and take a look back at some of our favourite previous feature cars. This week it’s Alex Wikin’s tuned Subaru Impreza WRX feature from 2014…

Buying and owning a car from new can often lead to a particularly special relationship. Every crumb, dent and even those dodgy stains on the back seats all signify moments you and your four-wheeled companion have shared. Sometimes, this bond becomes too strong for car and owner to ever part company.

Nowhere does this ring truer than with Alex Witkin, who has owned his bug-eye WRX for over ten years. Through the ups and downs, the pair have flourished, with
Alex’s amounting affections resulting in this rather unique Scooby.

The love affair started back in 2002, when car-mad Alex bought the black WRX from new while still in college. “I started modding it almost immediately… within a week I had already installed an intake, exhaust and the favourite first mod of all new turbo car owners – the blow-off valve”, he recalls. If only young Alex knew then that he’d started what would become the monster of all car builds, spanning more than a decade to come.

Clearly not shy about using his right foot, Alex managed to blow the stock turbo while still in college. Pretty good going fella! Far from put off, he used this as an excuse to ramp up the modification plans on the Subaru. “When I blew the first turbo, I knew it was time to go nuts”, he explains.

Alex’s car obsession was by now hitting boiling point, and with college friend Andrew Williamson he decided to try and make a career from his passion, by setting up Brainchild Customs. Initially an online parts import site, they managed to snap up some pretty rare products to import to the states, including the first ever Subaru Do-Luck boot lids (one of which is now on this very car!).

While the Scooby was locked away undergoing some serious alterations, Alex bought a BMW X5 daily driver to keep him mobile. But, surprise surprise, this didn’t stay standard for very long either, and he was soon the first in the country to rock a set of VOLK TE37s.

The Scooby finally re-emerged ready for the ’06 show season, sporting a stealthy all-black colour scheme. Even then, Alex’s attention to detail for his builds was clear to see. But after a chance meeting with the revered Team Emotion crew only one year later, he was inspired to start from scratch yet again with the Impreza.

Keen to steer clear of the fibreglass-bodykitted ICE cars which were filling up shows at the time, Alex was aiming for an unusual balance of race and show car styles, something which would look as at home on the track as it would on a headline show stand.

Maryland-based Old School Enterprises were given the strict brief of overhauling the WRX’s paintwork, with Alex’s choice of classic Ferrari Rosso Corsa red being applied both inside and out. While the car was there, the engine bay was fully shaved to further show off the quality respray. This initiated Alex’s plan to create the cleanest, smoothest Impreza possible, regardless of cost
and effort.

Alex entrusted AndrewTech Automotive Solutions to design and build an engine setup, which not only packed impressive grunt, but also looked the part to match the car’s now show-winning appearance. Several months later, and boasting a spec list longer than your average novel, the EJ25 lump was well and truly rebuilt. Now sporting several custom-made parts such as the gorgeous aluminium ‘inverted’ intake manifold and one-off TurboXS T04R turbo kit, the WRX is now good for a mighty 400WHP @ 20psi, more than enough to keep most cars in his rear-view mirrors.

By this point, Alex’s chequebook had already taken such a battering, he thought he may as well finish the build no-expense spared. The ridiculously clever AP Racing Air Jack system incorporates four built-in air jacks to the car’s custom 9-point rollcage, allowing Alex to raise and lower the car at the press of a button. Alex reckons this is the only road car in the world to feature such a bonkers system, and you know what? We have no trouble believing him!

Inside, swathes of Alcantara, carbon-fibre and aluminium constantly remind you that you’re in something very special. A STACK digital dash and Bride Low Max buckets confirm that the interior has been treated with every bit of attention that the exterior has.

With the Impreza finally ready to show off, Alex unsurprisingly began winning awards left, right and centre. He now has Best Overall Subaru awards from Hot Import Nights for both ‘07 and ’08 shows, with the blend of race and ultra clean styling making the WRX really stand out. “We had begun to change the misconceptions that a show car has to be full of TVs, speakers and fibreglass”, explains Alex.

Alex’s long-term love affair has resulted in perhaps the most comprehensively modified bug-eye Scooby ever seen, and illustrates what can be achieved with enough dedication, vision and patience. This Impreza has single-handedly raised the bar in show car standards.