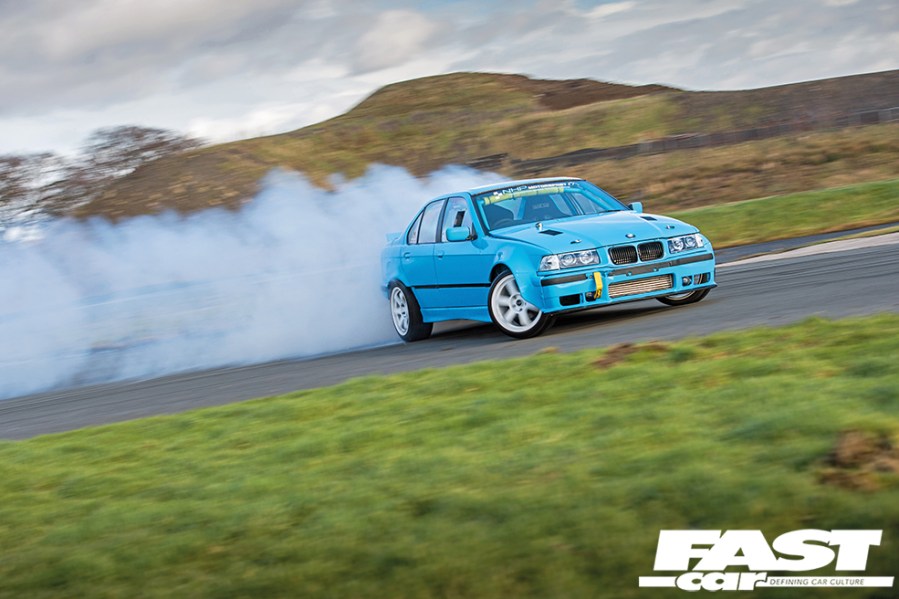 Chrissy Nailen’s BMW E36 may look like it’s been animated by Matt Groening, but it hides a dark 2JZ heart of pure malevolence…

Automotive fashion these days, in many corners of the modifying world, is toward the caricature – particularly when it comes to Japanese cars. In the Euro scene, there are often staggering efforts put into the pursuit of the ‘clean’, a look that originated in Belgium and Germany and focuses on shaving, smoothness and simplicity, and this has done much to put the simplistic angularity of the body kits of the 1990s behind us. But it’s very noticeable in the JDM scene that some people are going all-out to make their cars look like cartoons; it exists with BMWs too, as you’ll have often spotted within these pages. Take a peep at the wares offered by Liberty Walk or Rocket Bunny for evidence – massive bolt-on arches, sarcastically large spoilers, obscene camber angles, ever-deeper realms of wheel dish… OK, it’s not quite bszoku, but that manner of mayhem is closer to the mainstream than it’s ever been. Extremity sells, and a lot of people really want their car to look like a fictional, animated construct. This is no bad thing. In fact, it offers a lot of scope for creativity.

The E36 we have here demonstrates neatly how this global refraction of Japanese manga styling manifests itself in Europe. The E36-generation 3 Series may be a fully signed-up member of the modern-classic club these days, but it’s still recent enough to exist in our memories as a relatively everyday thing: its design is near-timeless in its simplicity, a basic three-box profile with pleasing proportions. A shape we’re all familiar with, filed away under ‘car – common’ in our cerebral cabinets. But this caricaturised and bright blue example? It looks like what would happen if you asked a cartoonist to animate an E36. All of the design touchpoints are there, and yet it’s bigger, brasher, louder, sillier. The fact that it’s a four-door really completes the effect in style, from the mundane to the absurd in one colourful swoop. 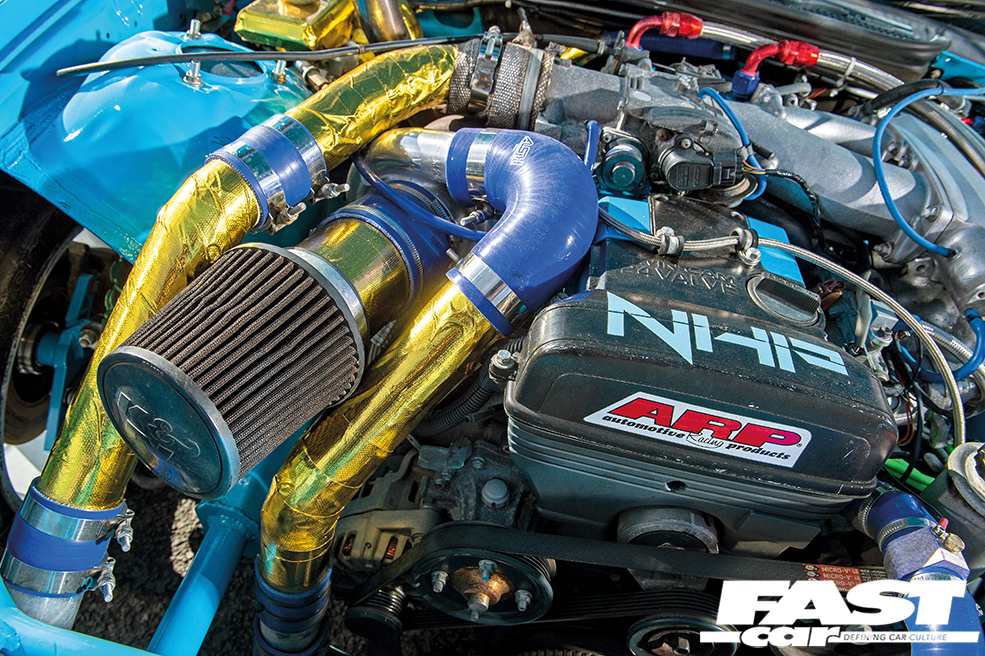 The architect of chaos here is Chrissy Nailen (@nailen666), and he’s a man who knows a thing or two about taking a sensible base car and exponentially ramping up the crazy. As the owner of NHP Motorsport, his enthusiasm for slaying tyres knows no bounds, with drift builds from this specialist shop earning deserved reputations for being phenomenally capable in the field of skidding.

Naturally, as we know, the sport originated in Japan and there’s a colossal enthusiasm for building, honing and thrashing JDM metal in drift events across the globe, but the appropriateness of various BMW platforms (i.e. the ones that fuse rear-wheel-drive with powerful engines, which is most of them) hasn’t escaped the drift community. Beemers certainly caught Chrissy’s eye early on. “I’ve been interested in BMWs since I first started drifting,” he confirms. “I love how well they drift from stock, and the newer stuff is amazing.” 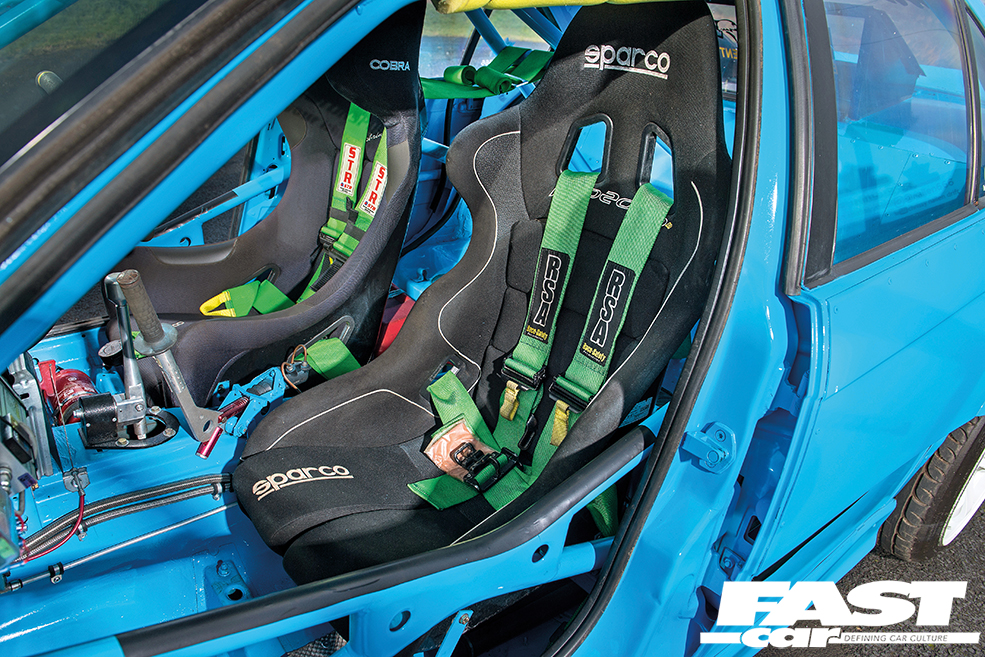 As he’s discovered with this build, the slightly less new stuff can be equally amazing – and perhaps the most endearing part of the story is that this balls-to-the-wall motorsport build was never intended to be a full-on competition prospect. Yes, the spec today is formidable and a lot of time and effort (and money) has gone into creating the car you see here, but it all began with a misbehaving £250 323i four-door that was languishing in a mate’s scrapyard.

“This was actually the first BMW I ever bought,” Chrissy explains. “It was a one-owner car in immaculate condition, although it had a running issue and it was awaiting the crusher. So I snapped it up for a bargain price, saved it from being cubed, and just decided to see what I could do with it. A lot of mates were running E36 chassis in drifting with good results, so I set about getting it working and seeing how it fared on track with the M52 engine.” 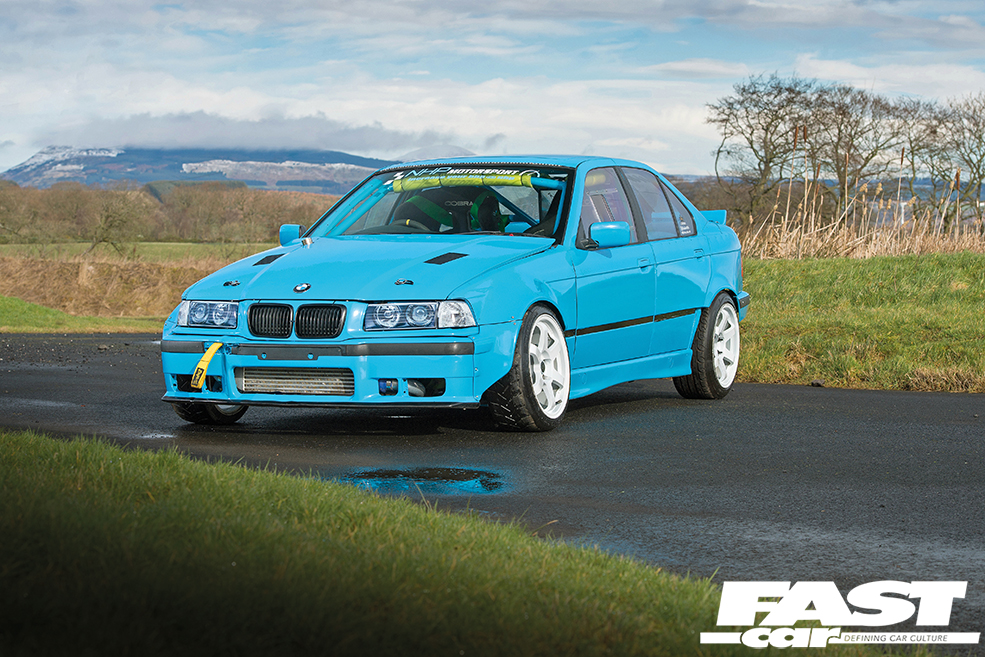 Job one after fixing the motor was to repaint the car in his signature shade of Fiat blue, before throwing on a set of cheap eBay coilovers and cut hubs, and seeing what was what. The results were impressive, the 323i eager to skid with the best of them, and with the addition of an M50 inlet manifold and a remap, Chrissy found a sweet-spot formula that he was happy to play about with at Driftland for a few years.

The nature of cartoons is that plotlines tend to get increasingly far-fetched and extreme, and it was inevitable that Chrissy would be itching to exacerbate matters before too long. Purchasing a weld-in roll-cage, he found himself prepping the car according to the eligibility regs for DriftCup, and suddenly the E36 was morphing into something else. Not so much an idle plaything as a focused motorsport build: the whole rear end was chopped out in favour of a custom tube-frame with a clamshell, the nose was equally tubed, the window glass replaced with Lexan items. Things had really been knocked up a notch. 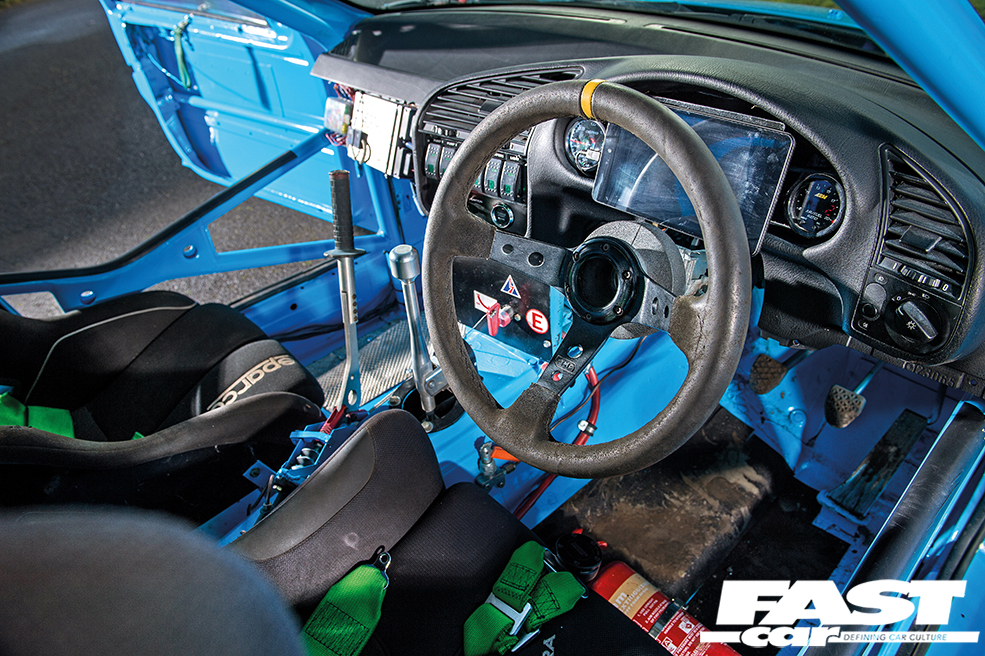 “It was at that point that I decided to throw everything I had at the car,” Chrissy grins. “This included the full fibreglass wide-arch kit, with vented bonnet and custom-cut tailgate. The kit I went with was one from Unique Customs, as I like how it comes onto the rear doors.”

Perhaps the most significant alteration at this stage occurred under the new lightweight bonnet. Having squeezed all the fun he could find out of the M52 motor, Chrissy made the decision to take inspiration from the spiritual home of drifting, and figure out a plan to swap the Bavarian straight-six for a Japanese one – specifically, a jay-zed motor. This is a legendary powerplant that Toyota first unveiled in the later Mk3 Supras, the 1JZ-GTE 2.5-litre twin-turbo signalling to the world that the firm might have one or two mischievous things planned… and when the covers finally came off the Mk4 Supra, the top-of-the-range model revealed its startling 2JZ-GTE, a 3.0-litre variant, again with twin-turbos, running a six-speed manual gearbox and offering up a gentlemen’s-agreement 280hp; actually more like 300hp and a real-world 326hp in UK-spec. Which made quite a strong point. 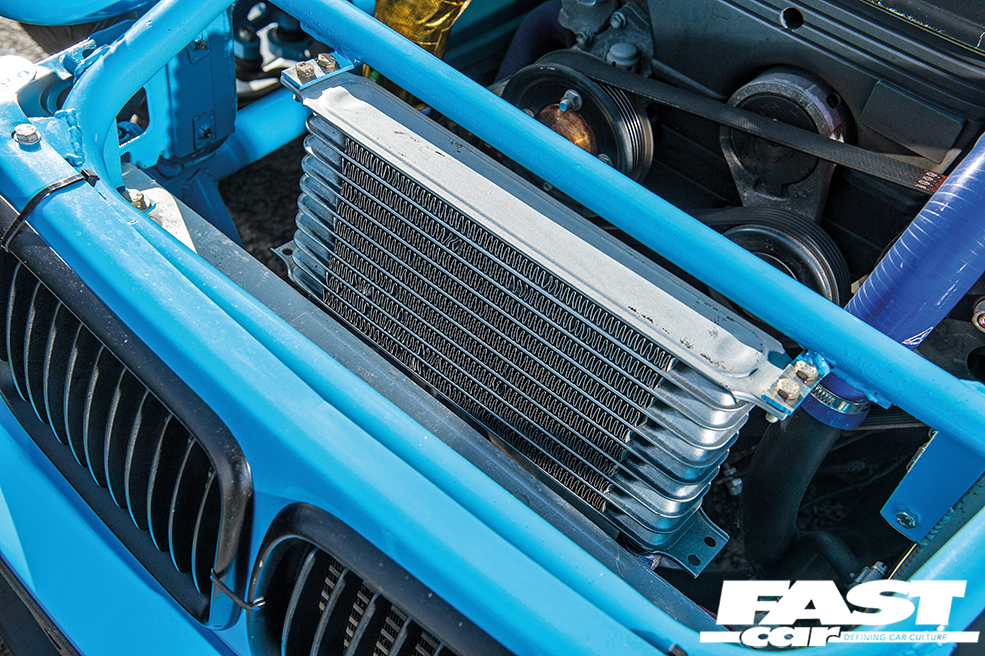 The 2JZ went on to feature in numerous cars – in naturally aspirated 2JZ-GE guise it could be found in the Toyota Altezza/Lexus IS300 and Toyota Aristo/Lexus GS300, the Crown, Origin and Soarer/SC300, while the twin-turbo 2JZ-GTE also appeared in the JDM-only Aristo models. The attraction of this platform is that, quite simply, the JZ has become a legend – it’ll happily throw out over 500hp on stock internals, and countless tuners in the drift scene have cranked them up beyond 1000hp. It’s not just an engine, it’s an icon.

The variant that Chrissy had his sights on was the Lexus-spec 2JZ-GE, as they’re available a little more affordably and abundantly than their fireball turbocharged counterparts, and it’s not a complex undertaking to convert them to forced induction if you’re planning on rebuilding the whole thing anyway. Which is precisely what he did, tearing it all down, fully checking everything over, and building it back up stronger. The BMW transmission was retained, mated to the alien motor with the aid of a PMC adaptor kit, and naturally, the engine mounts and propshaft had to be modified to suit the mechanical makeover. Chrissy crafted a bespoke rear-mounted radiator setup (because, since drift cars spend so little time going forwards, having a rad in the nose is kinda redundant), and modified the 2JZ to run a Garrett GT35RS turbo with 50mm external wastegate. It barks like hell through the straight-through stainless exhaust, and the upshot of this madcap build, with its juicy fuelling and endless custom solutions, is a nice round 500hp and 470lb ft at 1.1 bar. Management duties are taken care of by an Ecumaster EMU ECU because you need something bespoke when you’re talking about this level of cartoonish customisation, and the readouts all come through a tablet dash display. 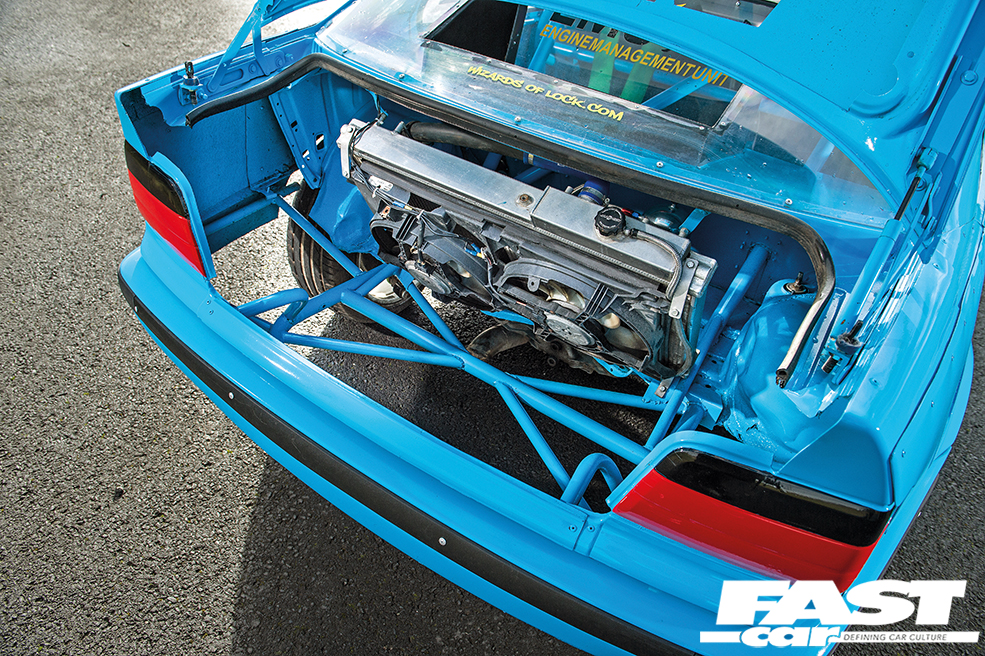 With all of these hardcore mods flowing in, it was essential that a belt-and-braces approach be taken to keep the E36 usable with its newfound swells of power. Those budget coilovers were binned and replaced by pukka HSD Monopro units, along with a CLM lock kit up front with custom lower arms, hubs and top mounts. Out back we find a reinforced subframe, fully poly bushed and fitted with camber arms, as well as Icefab toe plates; the front and rear have been tubbed, and of course, there’s a plumbed-in fire suppression system and isolator too.

So after six years or so, it’s all got a bit serious. What began as a bargain basement tramp-drifter has evolved into a hardcore competition machine, with every box ticked to keep the performance hysterical. And the irony of such seriousness being wrapped up in such a cartoonish aesthetic isn’t lost on Chrissy; it’s a deliberately in-your-face car that transcends its caricaturised style to wipe the smiles off the faces of anyone who dares question its abilities. An iron fist in an oversized clown’s glove; deliberately silly and yet oh-so sincere. 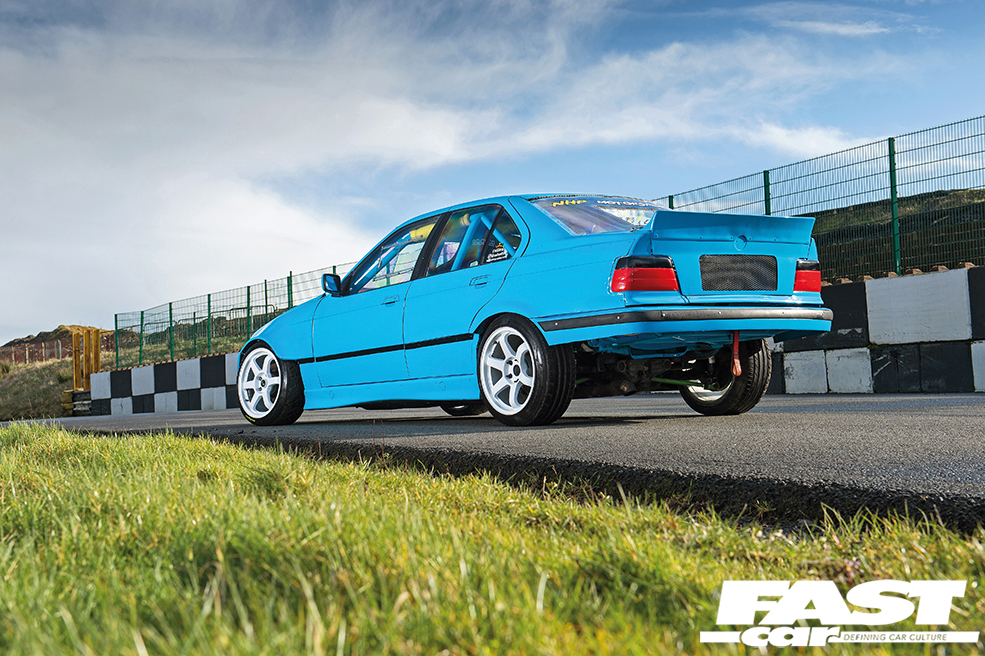