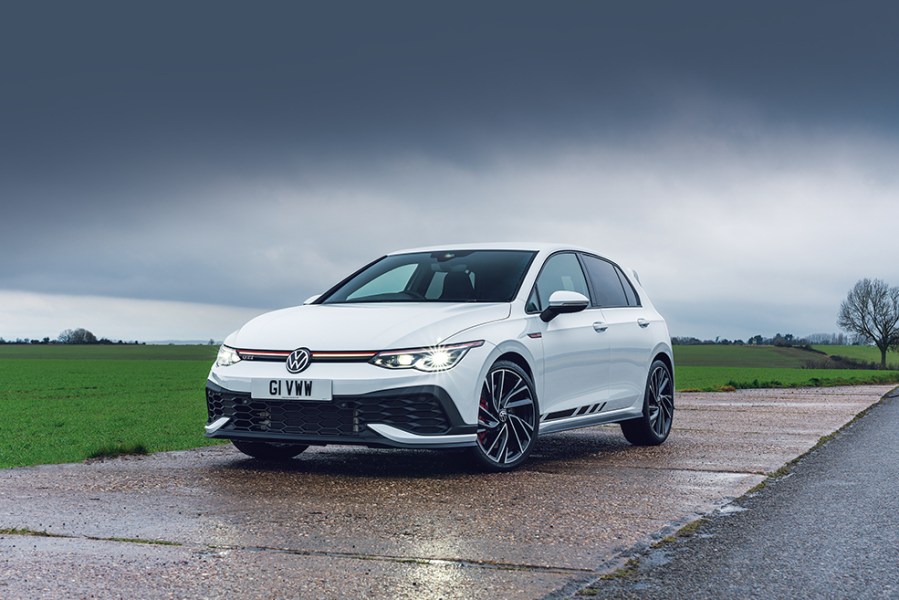 So, here we are. Peak GTI. Eight generations, 45 years and more than 2.3 million sales in the making, the VW Golf GTI Clubsport Mk8 is the fastest, most powerful, most focused car ever to earn the red pinstripes. For all the Mk8 hype around connectivity and digitalisation, it’s a line-up that’s still found space for the sort of track-tuned performance machine that would once have relied on input from… well, people like us. But this one’s got a factory warranty.

It’s hard not to admire Wolfsburg’s commitment to the cause, considering where the automotive industry is today. Battered by ever-tighter efficiency and emissions standards, unending SUV demand and the spiralling investments needed for electric vehicles, it’s no wonder that the hot hatch class has thinned out over the years. And yet, despite sharing the R&D limelight with the ID models, there are five performance models at the top of the Mk8 line-up. GTD for motorways, a GTE hybrid for the tax (sorry, eco) conscious, the four-wheel drive R for wet British weather, and a two-tier GTI range topped by the Clubsport. 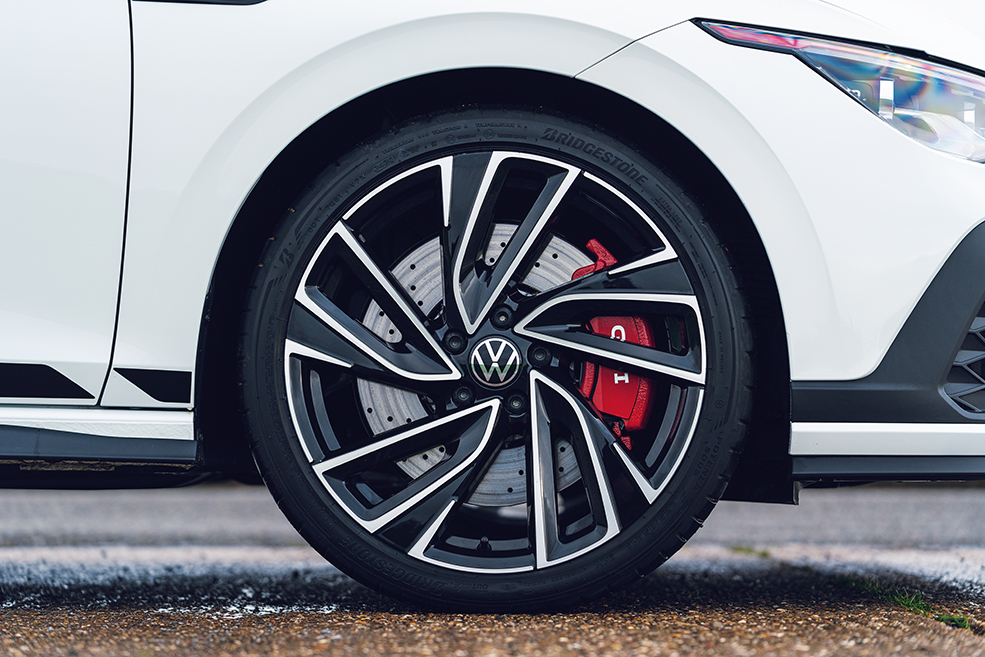 That’s a badge with some weight behind it. Volkswagen dropped the first Clubsport GTIs mid-way through the Mk7’s lifespan, finally stepping out of the typically understated Golf’s comfort zone and giving us something closer in spirit to the RenaultSport’s uncompromising track cars. With the R&D purse strings loosened a little, the 310hp Clubsport S monstered the front-wheel drive production car lap record at the Nürburgring in 2016, while the 265hp Clubsport Edition 40 offered a peppier GTI for those of us who still need back seats. Both get a nod of approval from us.

The Mk8 Clubsport isn’t a limited edition, and Volkswagen hasn’t diluted the badge into a stickers-and-trim makeover of the standard GTI – though that’s not a bad place to start. Despite the basic MQB platform being shared with the Mk7, there’s an additional eight years of refinement in its successor. Experience from TCR racing and Ring records have helped make the regular GTI a more convincing performance car in its own right. 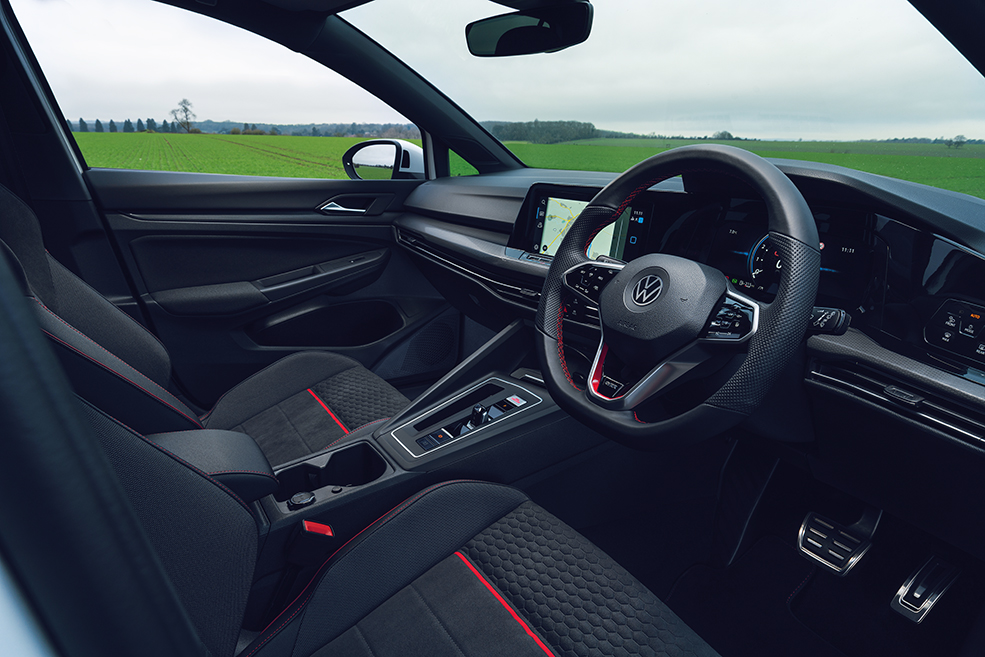 Heavily influenced by development driver Benny Leuchter, who not only set that Nürburgring record six years ago, but has his own Mk7 Clubsport S, there’s a raft of nip-tuck upgrades beneath the surface. The GTI gets the pick of the MQB parts bin, dropped 15mm closer to the tarmac with multi-link rear suspension and featuring the VAQ electronic LSD as standard for the first time. Its front and rear spring rates are slightly stiffer (5% and 15% respectively), the bearings and bushes have been reconfigured to sharpen responses and improve turn-in, and the engine subframe is now made of aluminium. That 3kg lighter upgrade which had previously been reserved for the Clubsport S.

The most obvious upgrade here is a sizeable step up in power and torque from the regular GTI’s EA888 2.0-litre TSI turbo engine – a fourth-gen evolution of the unit introduced with the Mk7, and still without even a hint of electric assistance. Instead, engineers have used higher-pressure fuel injectors to optimise combustion, and further reduced internal friction to widen the peak torque band and improve efficiency. No small feat when you’re also working within the toughest, fastest-changing environmental regulations the industry has ever faced.

Four-wheel drive system aside, the VW Golf GTI Clubsport Mk8 is closer to the Golf R’s performance than the GTI. Its full 300hp (a 55hp increase) is available between 5300-6500rpm, with 400Nm of torque (up 30Nm versus the standard GTI) from 2000-5200rpm. In terms of pub bragging rights, that’s a spread just about broad enough to outrun the 180kg lighter Mk7 Clubsport S in a drag race. However, on paper at least, it’s also slightly off the pace of perhaps its closest rival – the brilliant Hyundai i30N. Who would have seen that one coming back in 1975?

There’s an eagerness to the whole experience that hot Golfs have occasionally lacked from the factory. Press the engine start button – which pulses, like a heartbeat, as you get in – and the four-cylinder crackles and growls into life with a hint of turbo whistle at idle. There’s no manual gearbox, but the seven-speed DSG does nothing to blunt what has become an almost-always-accessible swell of torque, punctuated by the pop-pop of unburnt fuel on overrun. Larger paddle shifters on the steering column wouldn’t go amiss, but it feels every bit as quick as it sounds on paper. 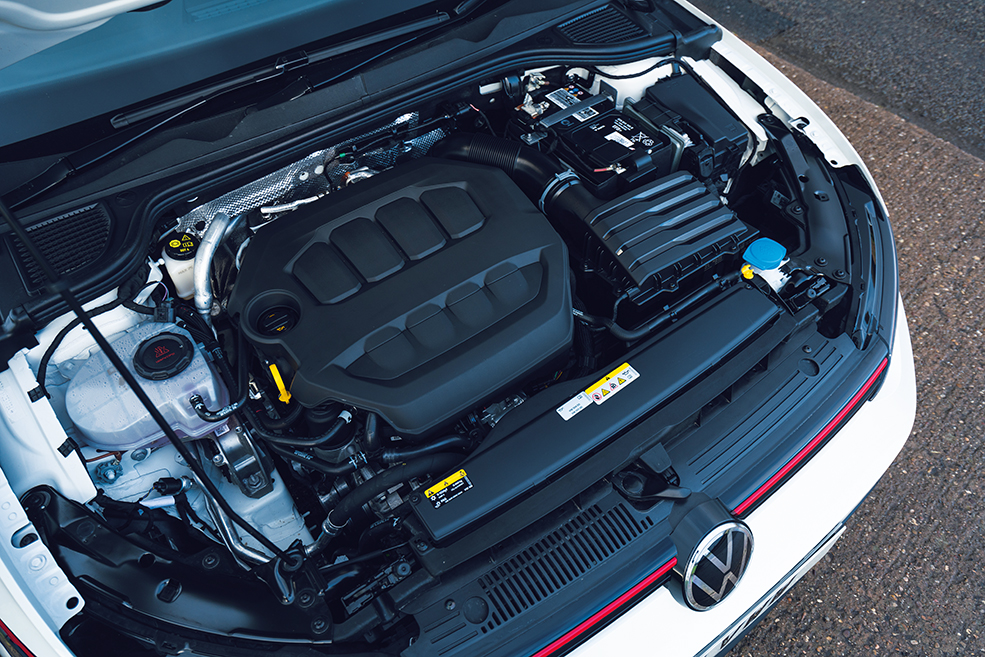 And not just in a straight line. The front axle shoulders the full burden of putting that power down, and there’s a suite of upgrades to set this aside from other GTIs. Most of the front bumper is open to maximise engine cooling and airflow, and it’s tipped with a splitter flowing into aerodynamic side blades – not dissimilar to the Clubsport S – to press the more aggressively-cambered front wheels into the tarmac, while lift at the rear is dialled back with the help of a large, open spoiler.

As a system, it’s hugely impressive. There’s never any sense that the front wheels are clawing at the limits of mechanical grip, or that the British road network’s ruts and bumps are trying to snatch the steering wheel out of your hands. Instead, the tyres follow every curve and undulation with confidence-inspiring fluidity, which means every fraction of the powertrain’s potential is put to good use. 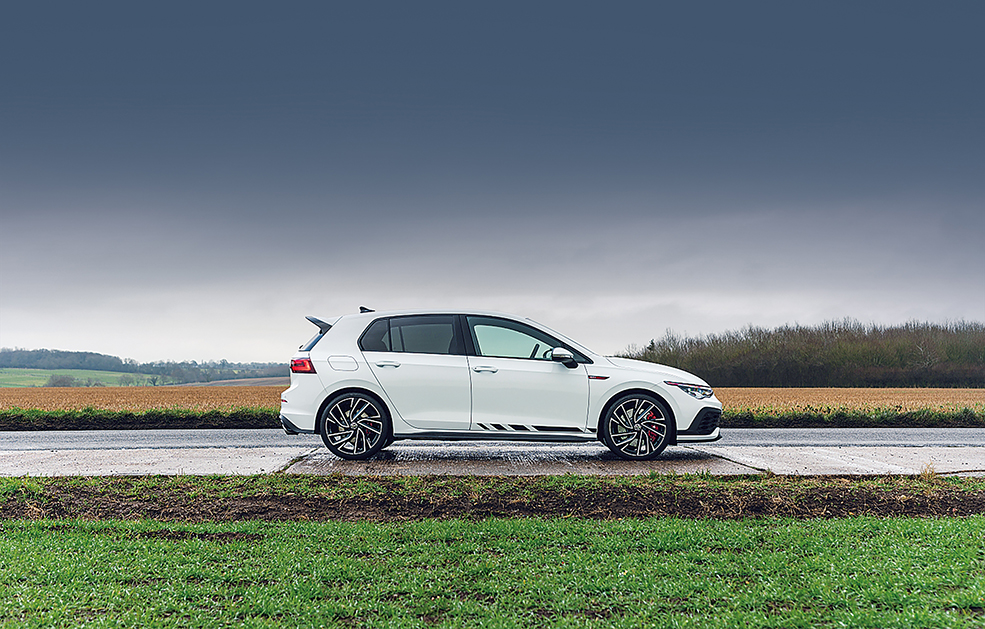 Technology helps. The MQB ‘Evo’ platform has a more advanced electronic architecture than the Mk7’s, and the Vehicle Dynamics Manager exploits a network of electrical systems to respond to the environment and driver inputs. Its progressive steering system offers stable, linear responses during ordinary driving, then winds on extra assistance for a more direct feel while pushing into tighter corners, reducing the need to shuffle hands around the wheel. At the front axle, the 18-inch brake setup features aluminium bells to shed 600kg of unsprung weight at each corner, and bite progressively harder when you want them to.

This offers a broad range of talents, selected by a choice of four drive modes that influence not only the powertrain and differential, but the chassis, differential and three-mode ESC system. On a smooth stretch of motorway, ‘Eco’ mode can de-couple the engine let it run at idle speeds tipping efficiency over 40mpg with almost no effort. At the other end of the scale, Sport and the unique Nürburgring-tuned ‘Special’ drive mode turn every element up to 11. The latter is more useful than it sounds; it’s calibrated to maintain a constant tyre contact patch on the Nordschleife’s uneven surfaces, and much better suited to UK roads than the over-firm, more track-oriented Sport mode. 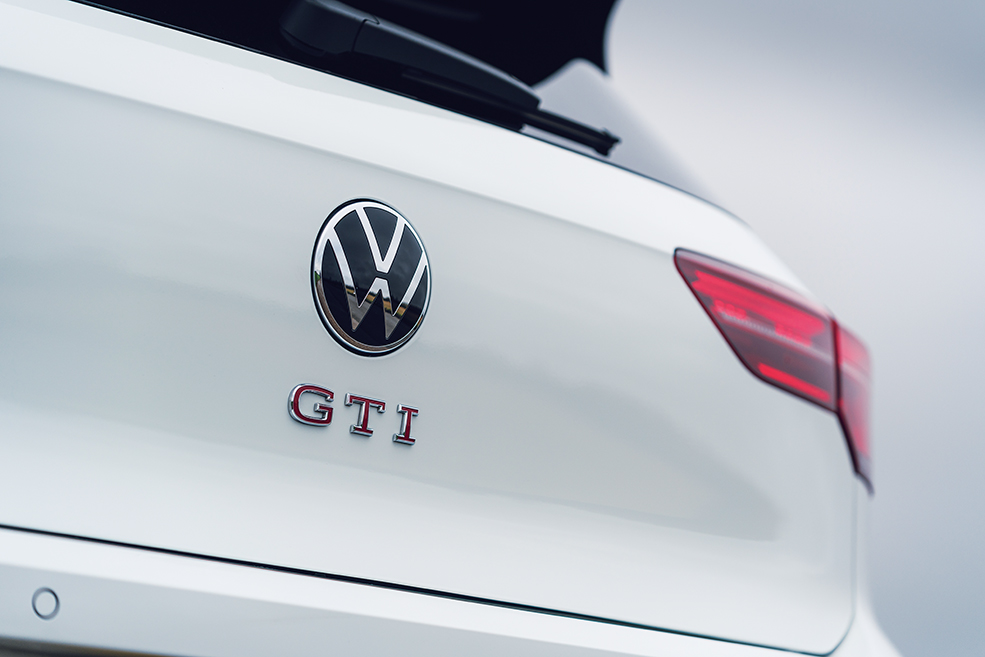 However, it’s worth noting that our test car had some useful options ticked. As standard, VW fits fixed-rate shocks and the same 18″ ‘Richmond’ swept-back five-spoke wheels as the basic GTI, which leaves it looking slightly under-wheeled. Our car had Dynamic Chassis Control (an £815 option) and came fitted with 8×19″ wheels on slightly wider Goodyear Eagle F1 SuperSport rubber than the base spec (another £760). Petrolhead maths suggests both are sound investments if you’re already stepping up to the Clubsport, and filling the arches gives it real presence too.

Otherwise, there’s not much missing from the factory spec. The ArtVelour trimmed tombstone seats aren’t quite up to the high standards set by the Mk7 Clubsport’s excellent Recaro wingbacks, but they’re figure-hugging enough for enthusiastic driving without being uncomfortable for motorway trips. Some elements of the de-cluttered dashboard – most functions relocated into the central touchscreen – aren’t quite as well thought out as older generations, but it’s relatively easy to adjust to and it’s rich in features. Tap away at the menus and the instruments will display a G-meter and boost gauge either side of a central rev counter with a lap timer at its core. 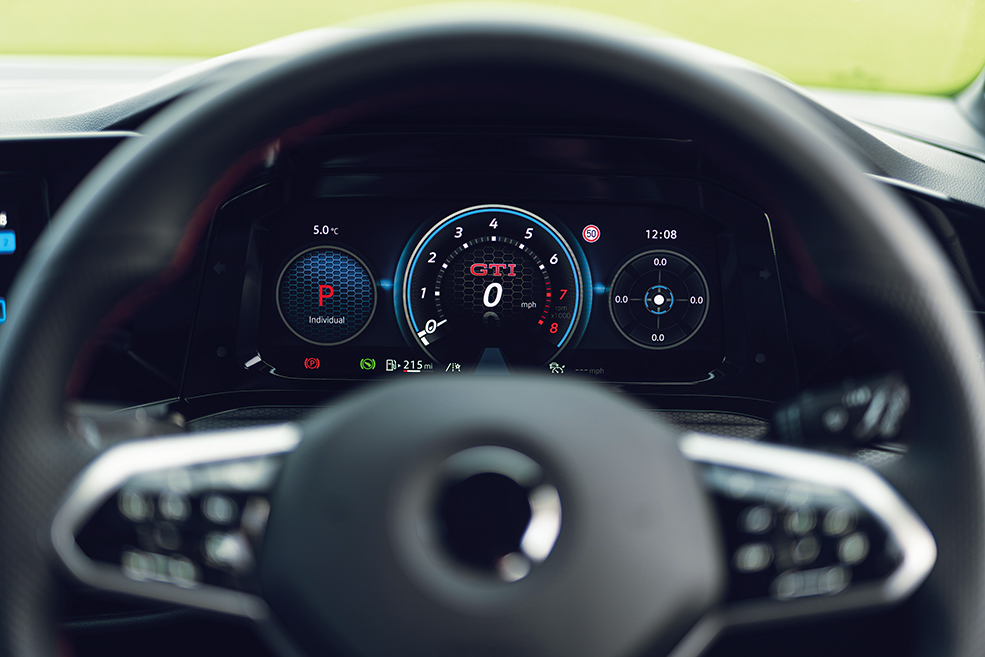 If we’re being really picky, the worst thing left off the option list – especially since the Scirocco was axed in 2017 – is a lighter, sportier three-door version. Five-door Golfs died out towards the end of the Mk7’s production run, which means the Up GTI is Volkswagen’s only surviving three-door hot hatch.

However, that’s a detail we’ll live with considering the VW Golf GTI Clubsport Mk8 is a project which could easily have not happened at all. In an environment that’s pushed rivals to reinvent themselves or drop out of the market completely, it’s great to see Wolfsburg still has its hands on the formula that made the Mk1 GTI so successful almost 50 years ago. Change is coming – and it’s exciting – but it’s worth enjoying ‘Peak GTI’ while it lasts. 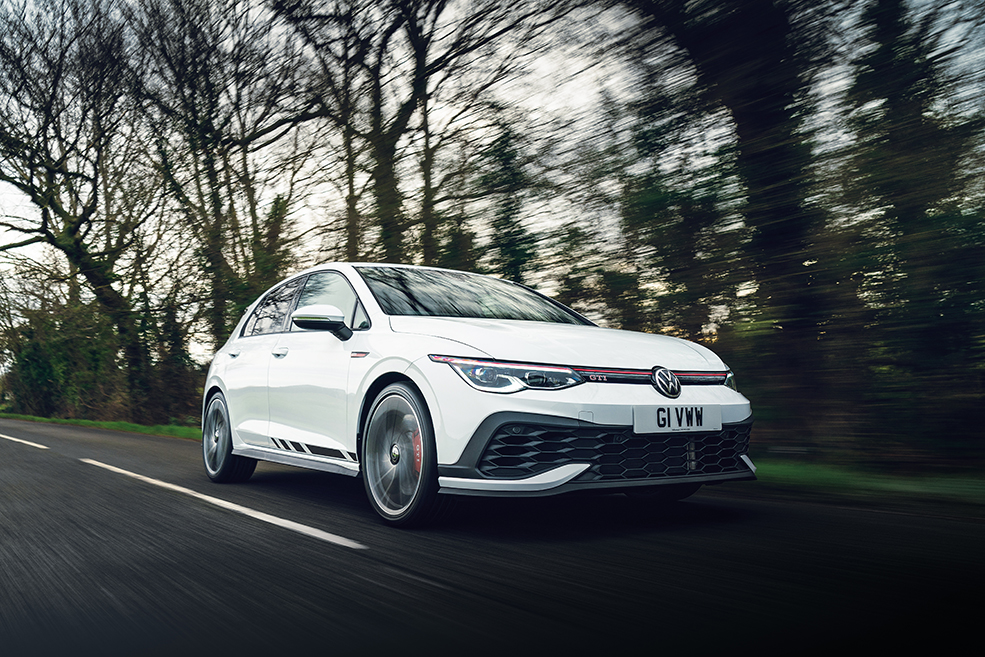