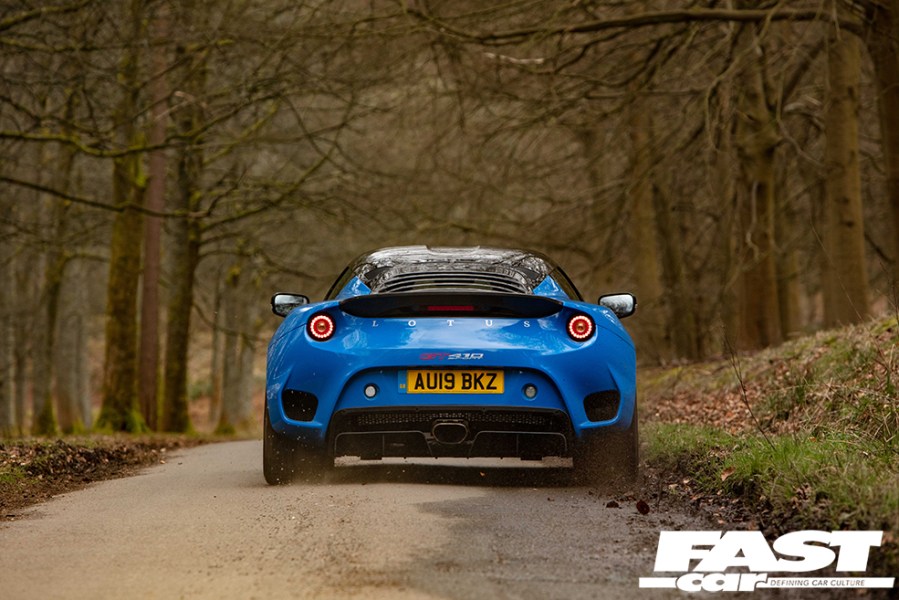 You know what you’re getting with a Lotus. You aren’t getting gimmicks, random pieces of technology or faux driving dynamics. What you’re getting is a car harmonised on track with the ability to drive on the road. It’s a car that’s dialled back to the very basics of what driving is all about, three pedals, a brilliant engine, rear-wheel drive and that’s about it. So, what happens when the marque decides to add in some luxury? You get the Evora.

Designed to be more focused on the road than the track, you first expect the Evora to be compromised. In some elements it is, particularly when comparing it to the angrier Exige, which is about as paired back as you’d like for a road car. The ethos has remained though, that very Lotus DNA hasn’t been lost in the search of everyday usability.

First up, as simple as this sounds, you can actually get in and out no problem. The Exige suffers with the monocoque clawing its way up into the door entry area, with the seat sitting lower than the monocoque end points. As a result, you sort of clamber in without any dignity, wedge your leg between steering wheel and seat and (hopefully) flop into position. Getting out is a darn site harder, that’s for sure. The Evora does away with this. While the seat position is still low, there’s no intrusion of the monocoque, so you don’t have to try and wedge between that and the wheel, making entry and exit far easier than its siblings.

Next up, the interior is drizzled with Alcantara. That’s probably saying it lightly, it reeks of it. The stuff is everywhere and does a good job of hiding what I can only assume is plastic behind it. Look, you aren’t buying a Lotus for its interior. To put it plan and simple, if you want to spend close to £100k on a sports car and the interior is your focus and not the drive, this isn’t the car for you. Hop over to Porsche and it’ll build you a 911. What the 911 can’t do, at the same price point anyway, is offer the raw performance that the Evora can.

You can see why this isn’t a car that costs £50k more, despite the performance on offer being close to that of something like an R8. The infotainment system is one from Alpine, which is clearly labelled, the buttons are old fashioned at the top of the dash to adjust drive modes etc., and the indicator and window wiper stalks are clearly from an old Ford. But, they all work and do as intended, what more do you want?

This car is a 2+2, but the rear seats are reserved for toddlers at best. There’s no chance an adult is sitting back there, unless they no longer want their legs. It is handy for chucking coats and bags back there, though, as extra luggage compartment. Which neatly brings me on to another point, there’s a lot of luggage space on offer. The rear carbon fibre rear hatch opens up to reveal the engine (it’s a full piece of carbon and is so ridiculously light!), but also features a nice compartment that’s big enough for two weekend bags no problem. It’s also handy to know that it extends right over to the wheel arches so you can store a lot more in there than you think.

The GT410 Sports uses the same tried and tested 3.5-litre supercharged V6 as used across the range for the past eight or so years in the Exige and subsequent Evora. Here, though, power is up to 410bhp. Weight is also up, though, as a result of adding sound deadening and other aspects to make it more of a road car than the Exige. I say weight is up, it’s still between 1300-1400kg depending on how you spec the car, so it’s hardly in the heavyweight category, especially when you consider the latest Porsche 911 is the wrong side of 1500kg…

Lotus says this is the most aerodynamically efficient Lotus road car of all, with carbon fibre panels used extensively across the whole car. In fact, sculpted carbon fibre ducts behind each rear wheel vent high pressure air from the wheel arches, balancing downforce across the whole car. This also looks very cool from behind as you can see straight through to the tyre!

Little tip for anyone who wants to drive a Lotus, push the seat all the way back, jump in, then adjust your position. Despite the Evora being far easier to enter and exit than the Exige, it’s still so ridiculously low down that people struggle. Moving the seats makes the whole process as easy as getting into a Mondeo… OK, not quite that easy but you catch my drift.

Fire up the Evora and it reminds you that this is a serious sports car. It awakes with a brutal, yet exotic cold start, then immediately shuts the exhaust valve to keep things quiet. So, the first thing you do is push the exhaust button on the dash to open them back up. What’s the point in having supercar performance if you’re going to cruise around quietly? Pfft.

Select first and away you go. It’s surprising just how easy it is to drive. The clutch is quite heavy in operation, and the throttle response is super sharp, so you can often over rev it from the off, which is no biggie as it sounds delightful. Visibility is also very good, while you sit low, you have a wide-open view ahead of you and the wing mirrors can be placed just so that you avoid nudging any curbs. It also gives a great visual of the wide hips, with them looking so menacing, hiding those 275 wide tyres at the back. Side note, there’s no point in actually using the rear-view mirror. While you can just about see through the carbon louvres above the engine, it’s not enough to see what’s actually behind you. The best thing you can use the rear-view mirror for is seeing the throttle cable in operation, which is very nerdy, but also quite fun.

Pootle around town and it becomes quite apparent just how much of a road car this is. While the Exige feels a little fidgety at low speeds, particularly over poorly surfaced roads, the Evora is far more composed and takes bumps in its stride. Yes, it’s no Mercedes when it comes to comfort, but it’s comfier than the Mk8 Fiesta that we recently borrowed…

The seats are thin fibreglass buckets, but make no mistake, they’re hugely supportive, although can cause a few aches over long distances. I travelled just over 700 miles in the 10 days I had the car and on long distances of over 2/3 hours driving I was glad to get out for a few minutes.

Anyway, the important bit. Select second and just bury the throttle, it rips through to the rev range with such ease that you’re out off puff in no time and need to be selecting third. There’s no denying that it’s a hugely fast car on the straights. But it’s the noise that really impresses, climb past 4/5krpm and it starts to sing. The V6 is barely resonated as it exits the tailpipes and it’s all the better for it. It not only looks exotic, but sounds exotic. It’s a unique tone that adds in a hint of rasp as the top end, almost VTEC like, dare I say. Scroll down to hear it, we couldn’t resist record a sound clip!

Anyone who knows Lotus as a brand knows that straight line performance isn’t the be all and end all. What matters is how it performs in the corners, and despite being slightly softer than the Exige, it doesn’t disappoint. The steering is so precise that you throw it into a corner with such confidence. The front end bites in and claws away at the apex, while the rear tentatively sits on the line between upmost grip and sideways fun. It’s a car that inspires you to push on by being so brilliant towards the edge. I’m in no way good enough to properly drive this thing on a knife’s edge, especially on the road. There’s far more performance than you can ever use on the public highway, to put it bluntly, the roads are in too bad of a condition and there’s too many dithering idiots in the way. Oh and you’ll be so far over the speed limit there’s no point booking any social appointments in the calendar because if you’re caught, you’ll be slung in jail.

The brakes are thankfully more than up to the job. They’re AP Racing four-piston calipers at both the front and rear, featuring drilled and grooved discs. The pedal is also nicely weighted with gentle progression, thankfully they’ve avoided the initial sharp bite that some manufacturers have opted for of late. I prefer my pedal to be modular, the harder I press the harder I brake, instead of getting 100% of the braking performance every time I breathe on the pedal…

It’s refreshing to be in a sports car that has three pedals, a beautiful engine sat just behind the seats and rear wheel drive. On the topic of three pedals, it feels as if they’ve taken the time to focus on what the driver wants; for example, they’ve positioned the brake and throttle pedal just so that heel and toeing becomes second nature, you’ll even be doing it into first when you pull up to a traffic light. It’s a car that beggars belief in terms of performance, but has you questioning why something this capable is so easy to drive slowly as well. It’s a rawer experience than say a 911, or even in the class above, say an R8, but it feels on par with them for performance. I know you’ll be having far more fun in the Lotus too.

Yes it has it’s problems, the main one being that it hovers around the £90k mark, yet you get a key from an old Mondeo (no joke) as well as an indicator and window wiper stalks from Ford, too. The interior isn’t what a £90k should be, but it’s not pretending to be flashy. It’s functional, comfy, and ultimately, fit for purpose. The drive is the focus of this car, and it emerses you with brilliance in the corners. In the end, an Exige is faster, but the Evora plugs the gap for those that want a slightly softer, but still nutter bastard performance. The question is whether I’d part ways with that sum of money for one, or would I go to Porsche? Personally, I’d stick with Lotus. After all, it’s #ForTheDrivers.