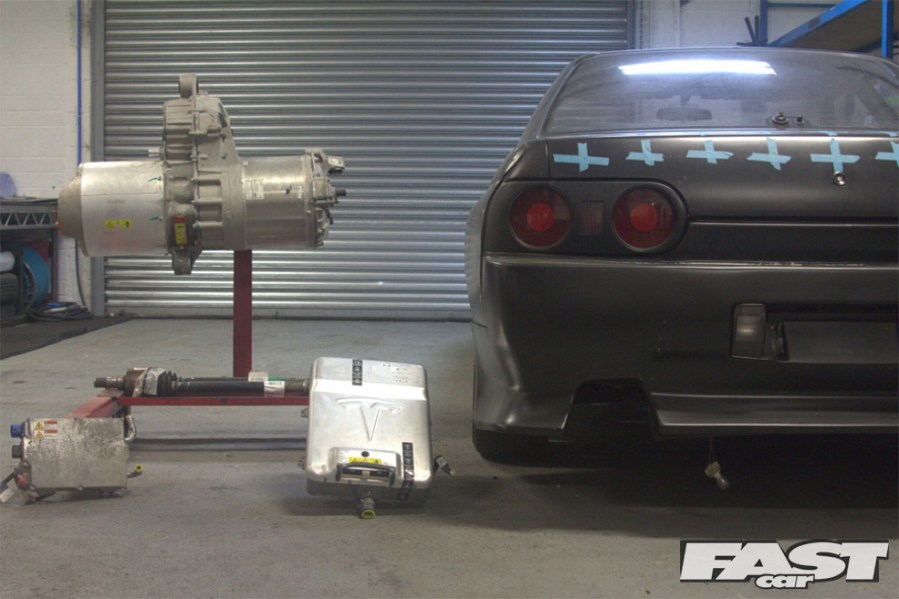 Yes, you have read that right. The words Tesla, R32 Skyline and drift car in the same sentence. Am I mad? Quite possibly. In fact make that definitely.

So the big question is can a Skyline R32 powered by a performance Tesla drive/ motor unit go sideways? Let’s hope so, because if not this will be a whole lot of work for nothing.

But in the words of Elon Musk, the bossman of Tesla and the crazy guy that strapped an electric car to a space rocket and sent it into orbit: “The first step is to establish that something is possible. Then probability will occur.”

So who is the crazy bastid behind this build and these words? Well, my name is Chris Hazell and maybe you can remember the Liberty Walk Audi R8 V10 I built under my other company Down & Out? With times changing and electric vehicles here to stay I thought it was time to move in that direction and start a new business specialising in electric car tuning and I’ve called it Zero EV. It’s quite a change to ditch gas guzzling V8s and V10s and opt for all electric power, eh?

Why? Big power and torque, that’s why! Also lots of people dislike electric cars and I’m sure there’ll be a backlash. But I’m also hopefully I can bring people round. Controversial builds and pushing the boundaries are what car modifi cation is all about, after all.

So what’s the plan of attack? About 600-plus bhp, a lot of torque, a wide-body conversion, lots of smoke and a full BDC spec. It’ll make its debut at Japfest Silverstone in 2019. Now, where’s that battery pack…