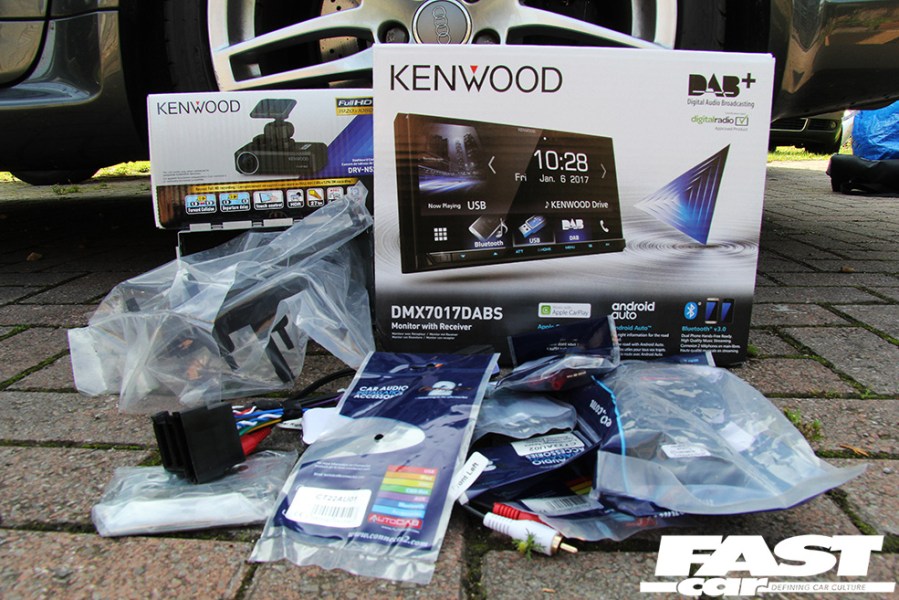 Our Glenda makes a sound investment, with some help from Kenwood…

Looks wise, like myself, the RS4 has aged pretty well, especially considering it’s about to enter its teenage years (unlike you – Jules). Something that hasn’t aged so well though is the audio and satnav system, just look at it.

So this month I finally got around to fitting the lovely shiny Kenwood DMX7017DABS doubleDIN and DRV-N520 dash cam that’s been sitting in the office for a good few months now.

Admittedly I did plan on fitting it all myself I bought all the fitting kit from Connects2, including an Audi steering wheel interface so I wouldn’t lose all the factory steering wheel controls. But after an hour or so of swearing at YouTube tutorial videos while sat in the freezing cold on my driveway I decided to give up. I was no closer to fitting anything and it looked like I had more wires than I started with. Yes, I know, poor show!

However, luckily for me I only live 20 minutes away from the audio and car tech gurus Automotive Control, so I did the sensible thing and got booked in. Fast forward a few days later and all I had to do was turn up to their workshop, watch someone else do all the hard work and take a few photos. Happy days!

And boy I am glad I did! As it was still a good few hours work for these guys, and unlike me they know what they’re doing. Yep, it seems what with all the wiring, connections and making it all fit flush and out of sight, the job was a tad more complicated than I had thought. But then this an Audi, so I shouldn’t really be so surprised.

So a big thanks to Connects2 for the kit, that ensures the unit fits like factory. And also thanks to Viv, Craig and Nick at Automotive Control for doing all the hard work and looking after the RS4 so well. If you’re in the South West and after any audio upgrades or in-car electrics work like alarms and GPS trackers, parking sensors etc, give them a call!

So, how’s the Kenwood DMX7017DABS? Well, it’s flawless. It does everything you could want a headunit to do and all with ease. The stunning 7-inch LED screen display is crystal clear and the Apple CarPlay works seamlessly with my iPhone X (yes I know the above isn’t an iPhone X, that’s what I took the photo on!).

This means I now have easy access to my music, messages, contacts list for calls and most importantly Spotify and Apple Maps, which is great as the previous satnav thought I was off-roading every time I took a ‘new’ road that’s been built in the last decade. I did say it was dated!

It also has a DAB+ tuner, Bluetooth hands-free calling and features a DashCam link, so I’ve also added the compact and rather clever Kenwood DRV-N520 Drive recorder into the mix.

This dash cam features wide-angle super HD recording at 27fps, a G-sensor, safety alerts including front collision and lane departure warnings and it can all be controlled from the headunit. Clever stuff eh?

To say I’m seriously impressed would be an understatement. Anyway, I’m off for a drive and some Classic FM…