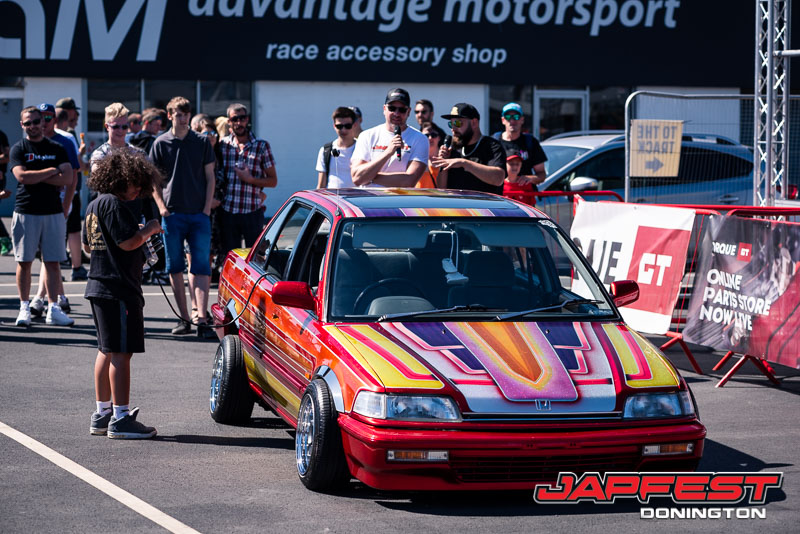 The smell and sound of tuned Japanese metal filled the atmosphere as Japfest Donington made a full-throttle return to Donington Park Circuit.

Fans of Japanese cars, both modern and retro, flocked to the event, officially supported by K-Sport, HardRace, BC Suspension, BC Forged Wheels, VIBE Audio and the shows official insurance partners Reis Motorsport Insurance.

Back-to-back with the re-branded event TRAX Donnington which took place the following day at the same venue, Japfest Donington was a fine celebration of car culture from the Land of the Rising Sun, with star attractions for visitors to take part in including Drift Driving Experience with Prodrift Academy,’ Jap only’ track time, the Sprint Test, the Tyre Challenge and the Live Stage hosted by presenter Paul Cowland!

1,000s of the finest cars on the scene were exhibited as part of the event’s club and individual displays, featuring everything from stripped-out track Evos to the very latest Civic Type R. So club sponsors Reis Motorsport Insurance had a job to pick the Best Club Stand winners, but with a diverse mixture they opted for Best Club: MX5 Takeover, Best One Make: GTROC and Best Regional Club: NE Subaru.

Fast Car, Banzai and Retro Japanese magazine once again supported the event with three epic displays with crowds swarming around past, present and future feature cars or flocking to buy a show merch from the retail stand!

One things for sure, though, and that’s the fact that Japfest continues to be the main event for anyone involved in the Japanese car scene. We’re already counting down the days until next year but in the meantime TRAX Silverstone should give fans a final dose of action on Sunday 7th October at Silverstone Circuit.