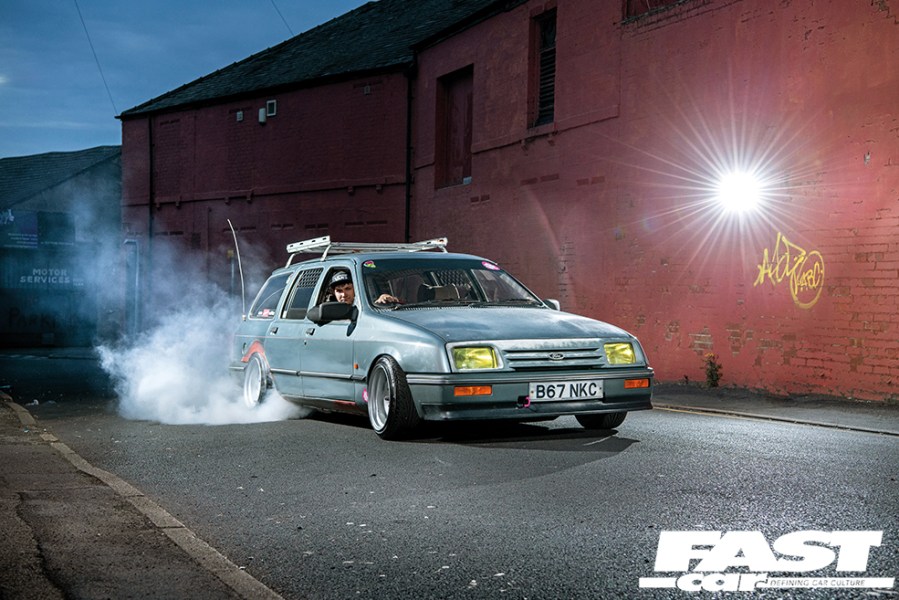 This tuned Sierra Estate may have started life as a leisurely diesel — and it still has the badges to prove it — but thanks to Tom Jackson’s wily tricks, it’s hiding some high-octane surprises…

If there’s one lesson that life teaches us time and time again, it’s that playing the long game is the route to success. Go into something half-cocked and things can blow up in your face, but taking your time will always pay dividends.

This unhurried approach is woven through the essence of the tuned Sierra estate you see here; its very beginnings were an exercise in casual meandering, being built in 1984 but not road-registered until December 1985. And since we’re talking unhurried, that first owner would have suffered a glacial 0-to-60 mph stroll of 19 seconds, thanks to the naturally-aspirated 2.3 derv’s relaxed 67bhp. 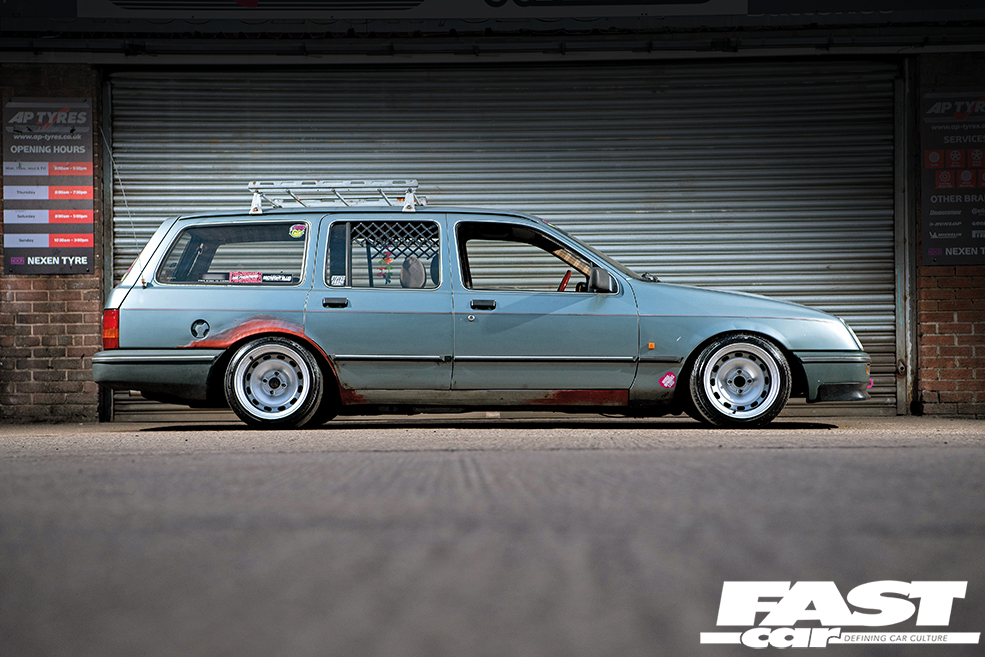 It’s packing quite a lot more urgency now, though. With a few decades-or-so passing by, the Sierra has found a way to fulfil its destiny in style thanks to its current owner, Tom Jackson. Tom’s a man who knows his stuff when it comes to unexpected engine swaps and the general slaying of tyres.

The stock diesel lump was thrown unceremoniously in the bin by Tom, as the Sierra’s wheezy 2.3 oil-burner just wasn’t going to flick his switch. So, he embarked on a mission of improving and perfecting, in order to turn this car into what it truly deserved to be. All of this has been informed by a lifetime of scientific and mechanical tinkering, because Tom isn’t one to let things go. 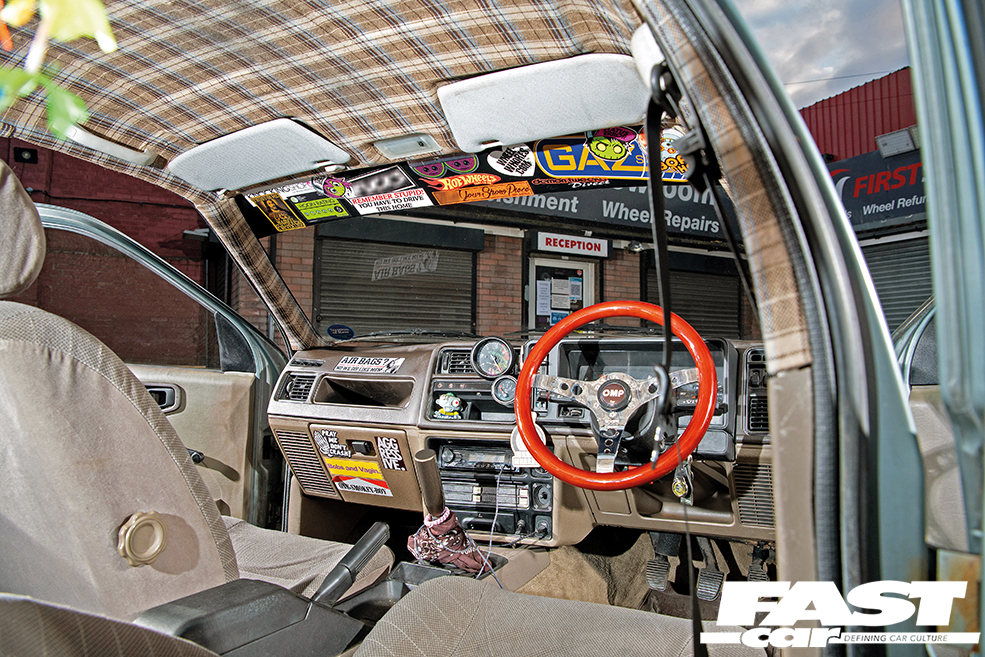 He says, “I’ve been into cars since I was a kid. I’ve always wanted to work with them, and it all started with the young me buying lawnmowers and generally anything with an engine from a local tip, tinkering with them and seeing how and what made them work.

“Naturally it progressed from there to actual cars, with motorbikes in between; I’ve always bought cars, modified them and sold them on, quickly moving on to the next idea I had in mind.”

So why a Sierra Estate this time? Well, Tom fancied having a crack at something that was both practical and classic. 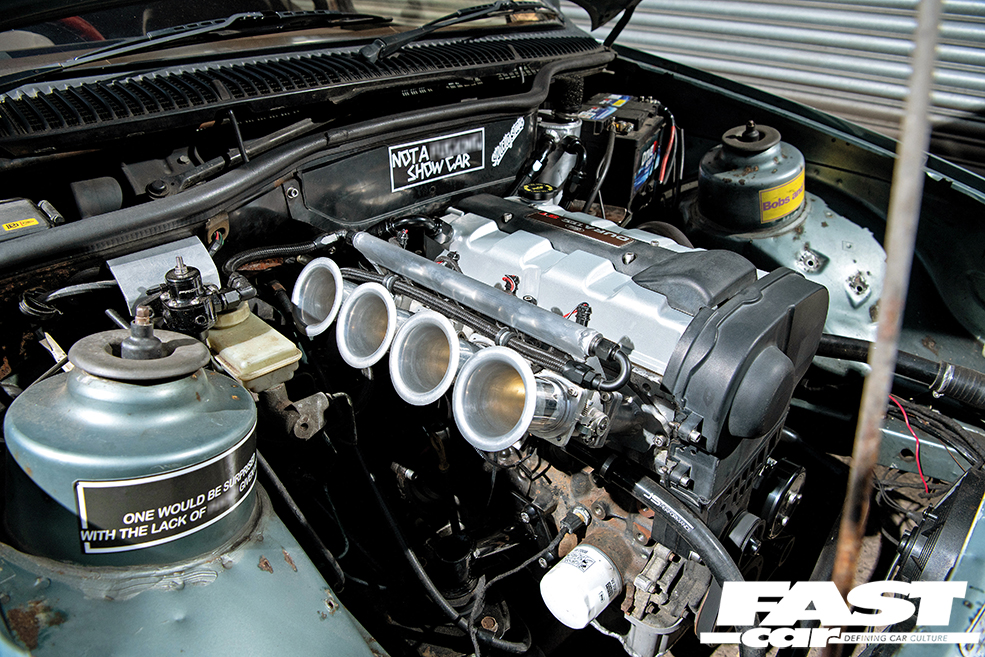 “I also prefer the oddball cars and underdogs that nobody really modifies or gives time to,” he grins, and we’re totally on-board with that line of thinking. Most Sierras that survive these days are the sporting variants, either big-money RS Cosworths or the more niche XR4s, but estates are seldom seen. Popular in their day, they were utilitarian things that evidently few people considered worth saving once they reached the end of their useful lifespan. But thankfully a few slipped through the cracks, and it was just such a donor that Tom was able to scoop up for his next round of automotive mad science. 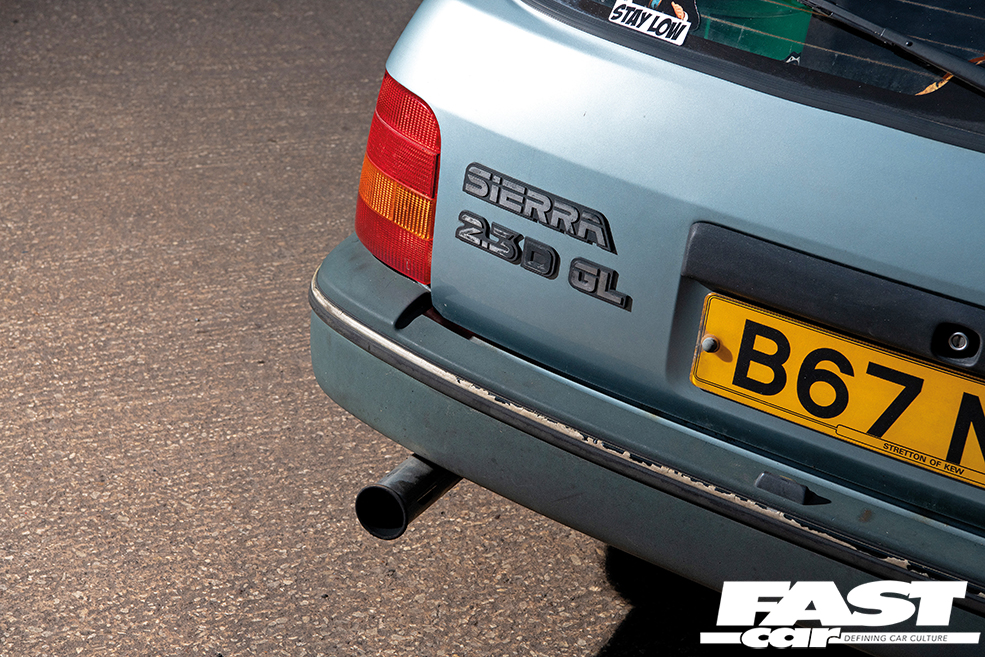 He explains, “I bought the Sierra from a local friend, Jamie. I’d seen it around, but I didn’t buy it as it was a fair distance away. Then Jamie brought it to his house after purchasing it and, now being local, I had to go and look. And I instantly fell in love. It was in completely standard form, a 2.3D GL model with 75,000 on the clock. The condition wasn’t too bad overall, but it needed work – mainly welding and general recommissioning.”

Getting the retro wagon back to his unit, Tom started having a good poke around to see what was what. In doing so he uncovered a fair amount of rust, but nothing too unusual for a 1980s’ Ford.

A plan was quickly formulated to weld up all the holes and get it on the road, although the course of the project quickly changed as Tom found out how hard it was to source bits for the 2.3 diesel. Reluctant to spend large amounts of time and money on an engine that wasn’t exciting, he dropped in a 1.8TD with a few home-brewed fabricated parts and a big turbo. And it’s at this point that we learn just how much Tom loves swapping engines. 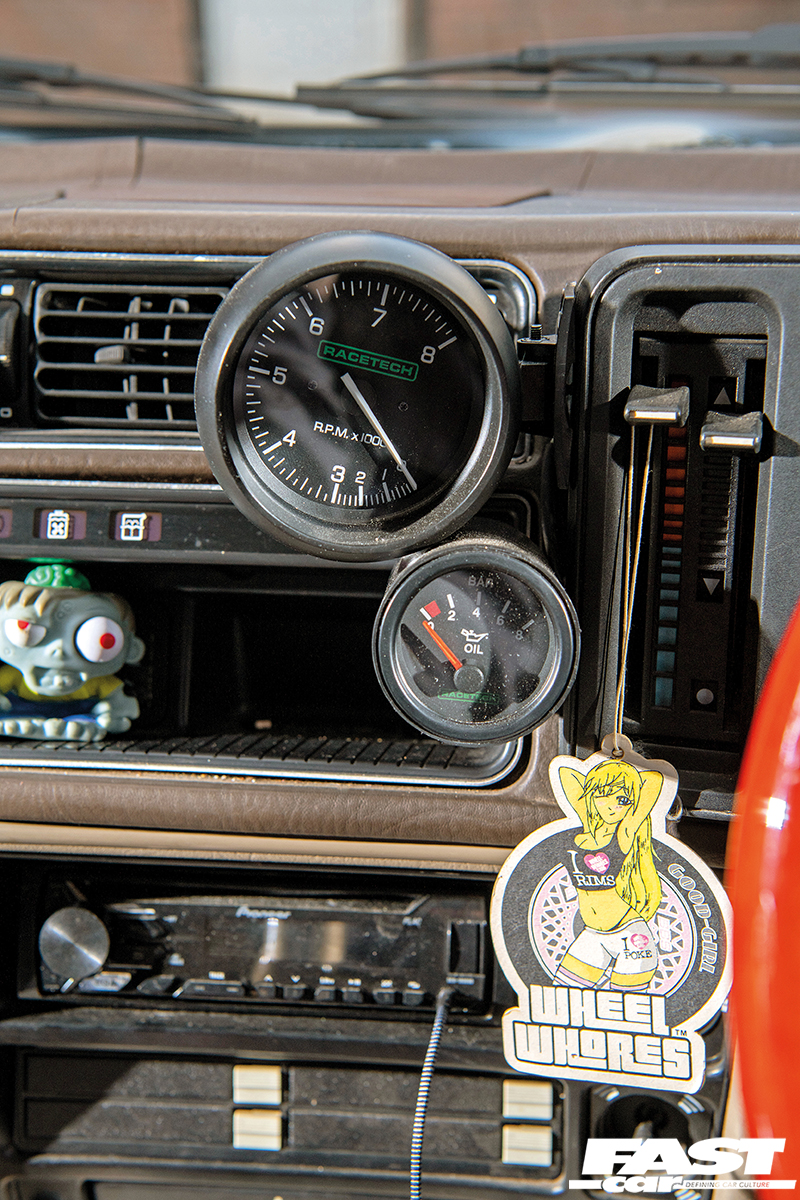 “After the third or fourth 1.8, it became obvious that those turbo-diesels were no good,” he muses. “So at that point I fitted a 2.0-litre Zetec on R1 bike carbs, and that was much better. But it had to be taken out again owing to it having a bad sump, and it’s always been my view that if you’re removing an engine, you might as well replace it with something that’s one better.”

With this in mind, Tom set about fitting the Zetec’s trendier brother – an ST170 engine. In this guise it finds itself running Jenvey throttle bodies, an HPE manifold and bespoke management, while all of the mounts and pipework had to be home-made, as well as the sump and the breather setup.

Every job on the car has been carried out by Tom’s own two hands, with the odd extra hand from a mate or specialist waved in the right direction here and there. 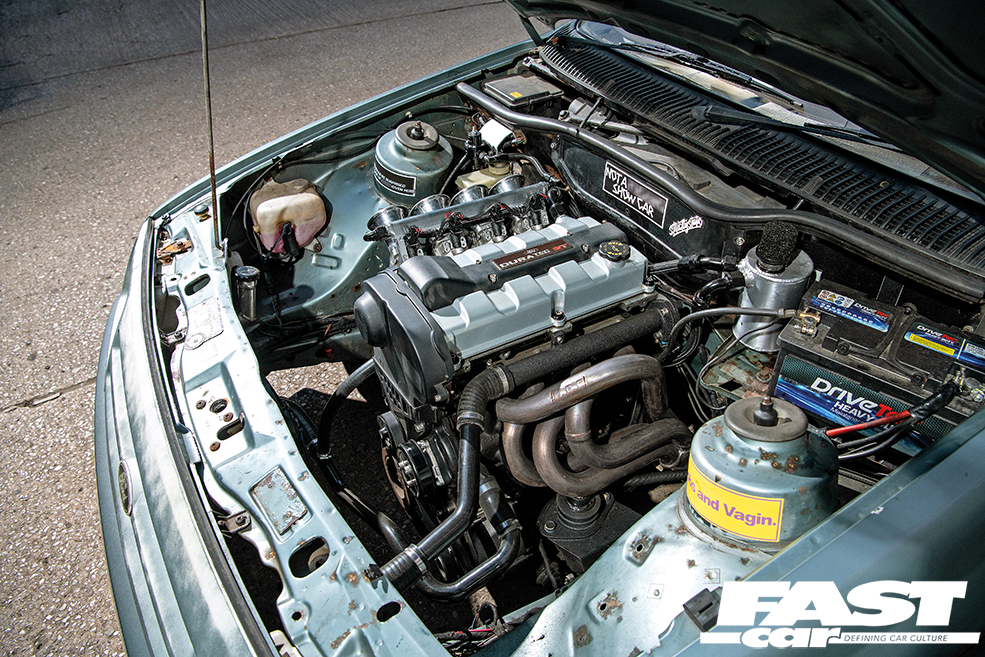 The chassis has been prepped for the extra power by virtue of ST170 brakes up front and Gaz coilovers all round, the improved contact patch provided by 195-section tyres wrapped around fat 9in banded steels. And the true genius of this build is that all the unexpected firepower is wrapped up in relatively stealthy form; sure, it’s squat and broad, but the original 2.3D badging, factory pinstripes and rough arches tell a story of a load-lugger with a life well-lived.

Tom says, “There are some who may argue that I’ve ruined a classic, but I love stirring up the pot. I’m planning to get the rear geometry dialled in with an adjustable rear beam, an LSD, and possibly a turbo at some point. 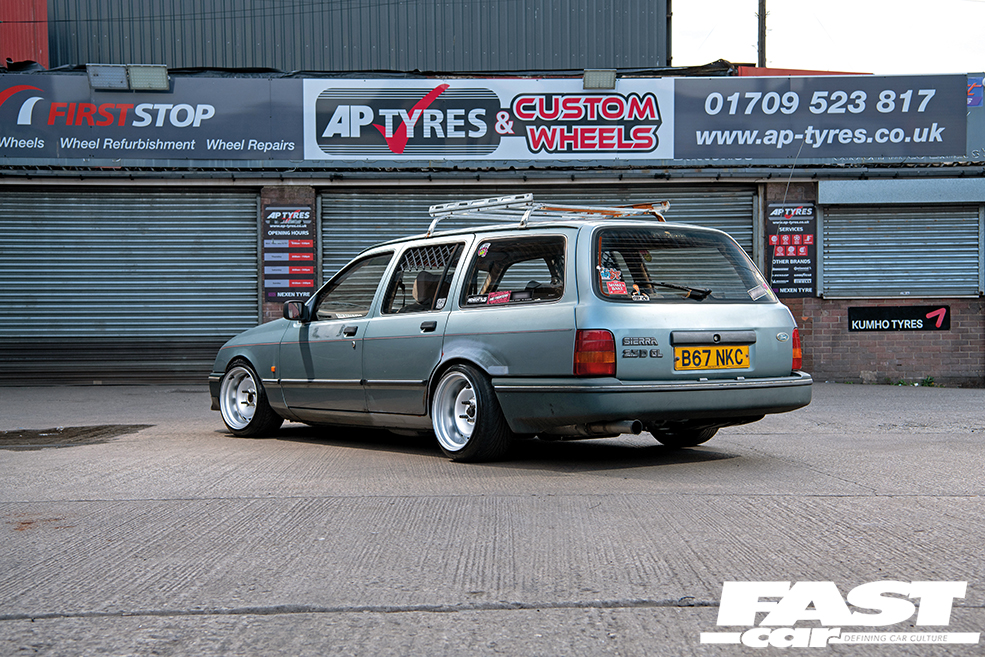 “But who knows, it may end up engine-swapped – again.”

We wouldn’t bet against it. Tom’s not rushing into anything, and this tuned Sierra Estate is all about the long game. Don’t be surprised to see an electric or hydrogen-powered Sierra estate sometime later this century…