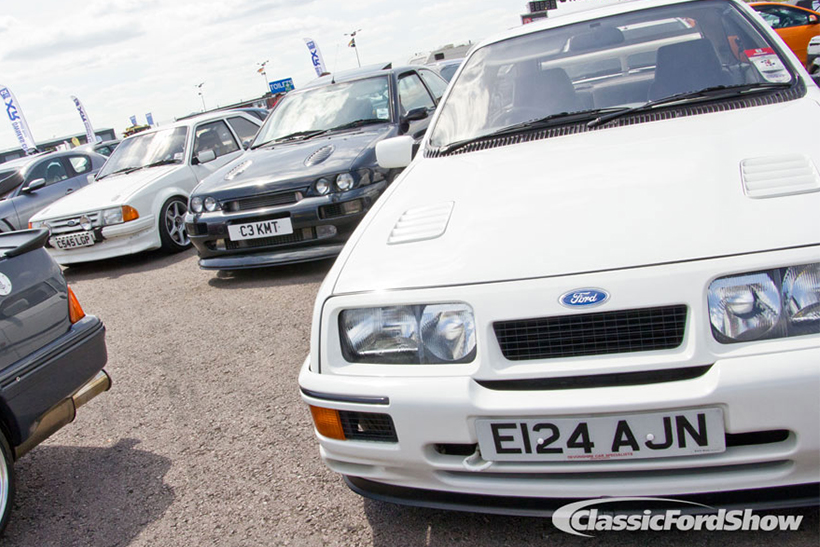 One of the most iconic performance cars of the 1980s is celebrating its 30th anniversary in style, having been named the ‘Ultimate Cosworth’ by one of the UK’s biggest one-make car shows.

The Ford Sierra RS500 Cosworth pipped its spiritual successor, the Escort RS Cosworth, to the post, securing over 55% of the votes in an online survey carried out by Ford Fair to determine which of the two icons was the daddy. The Escort also has a major anniversary in 2017, celebrating its 25th birthday.

A special display celebrating both of these famous fast Fords will be one of the main features of this year’s show, which takes place at Silverstone, Northants, on Sunday August 6.

Just 500 RS500 road cars were made, 75% of which were finished in black, the rest in either white or Ford’s distinctive Moonstone Blue. They were finished by Aston Martin Tickford, with a bigger turbo, while the main external identifier was its outrageous ‘whale tail’ spoiler – a far cry from the average showroom Sierra.

In addition to the Cosworth anniversary feature, there are some other birthday’s being commemorated in special display areas. These include 15 years of the Mk1 Focus RS, 15 years of the Mondeo ST220 and 15 years of the Focus ST170 – yes, 2002 was a great year for fans of fast Fords.

Ford Fair will also have over 4,000 club cars on display, including many other classic and modern Fords, plus a special selection of cars from Ford itself, including the all-new Fiesta.

Other star features will include The Live Action Arena, which will once again be at the centre of the show, a live performance from stunt driver Paul Swift, bookable track time for show visitors and a dedicated Classic Zone, hosted by Classic Fordmagazine, which will play host to all manner of historic heroes from Anglia to Zodiac.

Once again, the event will see headline sponsorship from aftermarket Ford specialists, mountune, while Hardrace, KSport, BC Racing, BC Forged Wheels, Goodridge, Sky Insurance and ValetPRO are other key sponsors.

New for 2017, Ford Fair will also host the inaugural Fast Ford Awards sponsored by Sky Insurance. This special display will form part of the Fast Ford stand at the show, and will include winners of various categories, such as ‘Best Street Car’, ‘Best Engine Swap’, ‘Best Modern Ford’, ‘Best Old School Ford’ and many more.

This epic display of the UK’s finest fast Fords will coincide with the very latest issue of Fast Ford magazine – available to buy at the show a week before it hits the shops. The ‘Fast Ford Awards’ special issue will include full details of the various categories and all of winners. And, with all of the winners proudly on display at the front of the Fast Ford stand, you will be able to get up close and personal with the very cars in the magazine.

At the show, all of the Award winners will be entered into the Fast Ford People’s Choice Award, which will be decided on the day.

Also, you’ll find the Ford Fair merchandise marquee on the Fast Ford stand, where you can pick up the latest issue of the magazine, take advantage of some show-exclusive subscription deals, or get your hands on the latest branded goodies.

Other show highlights will include a Show & Shine sponsored by ValetPRO, individual entries, public track time and a packed retail village.

Already, over 4,000 Fords are booked into club displays, promising a fun-filled day for all fans of the UK’s most popular car brand.

For the chance to buy discounted tickets*, visit Ford Fair