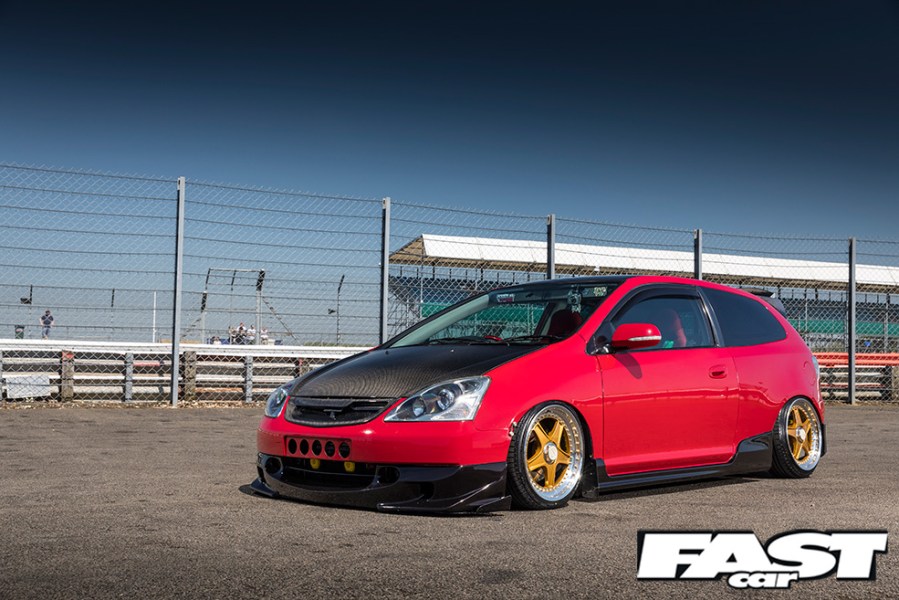 While most modified Honda EP3 Civic Type Rs seem to spend their lives being hooned around race tracks nowadays, Craig Allen’s dared to be different with his refreshingly unique, aired-out show stopper…

It’s funny how certain models of cars can develop a very particular image for themselves as they age. Take the much-loved EP3-shape Honda Civic Type R as a prime example: a hot hatch that’s developed into THE go-to affordable track toy for those who can’t quite stretch to a Porsche GT3 but still want reliable, revvy thrills as they blast around their favourite race track.

And while these little pocket rockets are undoubtedly very well suited to living a life of being thrashed around a circuit, does this mean we should frown upon those who decide to take a slightly different route with them?

Chesterfield-based fabricator Craig here certainly doesn’t think so. Having loved the way these Civics look for many years and recently on the hunt for his next fun daily driver, he’s put the track-inspired image on the back burner and carved his own path when it comes to modifying, leaving him with an example that is not only much more unique than most, but also far more versatile than you might first think…

“My first Honda was the less-powerful version of this – the EP2 – as that’s all I could afford at the time,” Craig reveals where is love for this particular shape of car began. “It was enough to get me to eventually buy the Type R version…” Finally snapping up a slightly body damaged Milano Red example off a friend who wasn’t confident on repairing it himself, the initial plan was to get the car fixed up before subtly improving on its aesthetics with the likes of a subtle drop and some interesting wheels.

With the repairs quickly seen to, things took a slightly more serious turn than expected as Craig got inspired by some of the more extreme show-focused versions of this car that were killing it out in the States at the time. Combined with the fact that his daily commute often led him down some particularly treacherous country roads, and perhaps the most notable modification on the entire build soon made its way into his life…

“Someone I knew was selling their full D2 air suspension system designed specifically for this car,” Craig smiles – the kit potentially promising to not only provide him with a killer stance when aired out but also offer up far more adjustability than coilovers when it came to tackling those pothole-ridden back roads.

“Because it’s based on coilovers anyway, it still handles like a dream, but just means it looks far more awesome when parked up and also saves me from repairing my splitters every time I take it for a drive!” Some will undoubtedly be a little sceptical about adding air to such a famously well-handling ride, but it’s hard to argue with Craig’s bang-on logic here.

Figuring he’d stepped things up a notch now he had such an unusual chassis on his hands, Craig thought he’d also take things to the next level when it came to how the hot Honda looked. With the help of carbon fibre guru friend Jez, a bonnet and some other Mugen exterior parts in the same lightweight weave were whipped up, nicely contrasting against the bright red body panels, with Craig finishing off the black-and-red theme by painting the side skirts, rear bumper and roof in the dark shade to match. This bold, two-tone look allows the car to stand out for all the right reasons, working even better when it’s dumped on terra firma.

Originally rocking a set of Calibre multi-spoke rims with contrasting gold faces and enjoying the way the colour scheme set off the rest of the car, the same hue was chosen when Craig refurbished this ultra-rare set of JDM splits that he stumbled upon recently that now take pride of place on each corner.

“They’re made by a company called Stitch but there’s not much information about them anywhere online,” he grins as he reveals just how unique his three-piece wonders really are, their polished dishes giving the whole car an extra-special look that just makes the whole thing even more unforgettable. With the help of rear camber arms and Skunk2 lower control arms, these 8in-wide puppies were soon sitting pretty underneath the factory arches.

Inside, the high standards seen elsewhere remain, with Craig trying his hand at woodwork to get that frankly epic air/ICE boot install up to scratch. “I’m used to working with metal, but thought I’d try and create something that looked good here,” he modestly tells us, clearly succeeding in the task of creating a special environment to display that air tank and 10in sub-woofer out back. Up front, a duo of Premier Edition Recaros are set off with those must-have Takata harnesses, with Craig’s handiwork continuing in the form of a custom mount for his extra dials which now sit neatly just above the glove box.

It may seem like most of the work performed follows a show-friendly formula, but Craig’s keen to stress that this is still his daily driver and he continues to enjoy the VTEC-fuelled excitement these machines famously offer up at any given opportunity.

It’s why you’ll find some well-thought-out parts under the bonnet that only add to the fun, such as the K&N intake, full exhaust system and Tegiwa radiator all making an appearance, with the bay itself receiving swathes of carbon fibre and polished metal to make sure it stacks up to the high standards on the rest of the built. “The performance is still just as brilliant as you’d expect,” Craig stresses. “It handles incredibly while remaining practical and comfy, too.”

It’s nice to see someone with the minerals to venture off the beaten track and try something new with the popular EP3 chassis. By doing exactly what suited him, rather than others, Craig’s left with the freshest modified Honda Civic this side of Santa Monica at his disposal.

“It’ll probably be getting some more carbon bits, and then I’ll just see what inspiration I get next,” he confidently tells us his future plans with this stunner. Regardless of what they are, we’re in no doubt they’ll get people talking for all the right reasons…

THANKS
Big thanks to Carl Blakeley, Brandon Williams, Marcus Kirby and Jez Howarth for all the help building the car – I don’t think it would be like it is without these people, also Dean Stevens for supplying me with all the Mugen fiberglass bits.